The recent series of earthquakes has made the media and government more concerned about the potential disaster that could happen in Metro Manila. A series of disaster preparedness programs headed by the Metro Manila Development Authority in cooperation with LGUs, Dep Ed, DPWH and PhiVolcs has been running in full scale since last month.

The MMDA has recently launched the Be Prepared Metro Manila website to provide crucial information about earthquake preparedness with special focus on the West Valley Fault that cuts across multiple cities in Metro Manila. 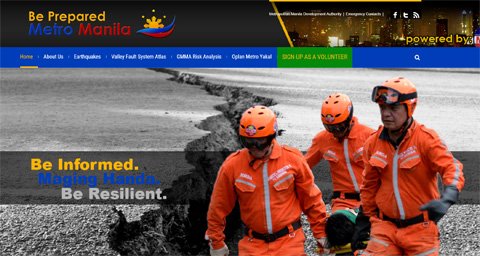 The Valley Fault System (VSF) Atlas is a handbook of large scale maps showing in detail areas traversed by the Valley Faul System. It was developed and launched by the Philippine Institute of Volcanology and Seismology (PHIVOLCS) and the Department of Science and Technology (DOST). The VFS is an active fault system in the Greater Metro Manila Area (GMMA) composed of two fault traces: the 10 km long East Valley Fault in Rizal and the 100 km long West Valley Faultruns through different cities and towns of Bulacan, Rizal, Metro Manila, Cavite and Laguna.

Check out the dedicated website Be Prepared Metro Manila by the MMDA here.