After the unveiling of Motorola’s new logo, it seems like we’re getting closer and closer to the company’s next big thing – the Moto X. The company’s latest ad speaks a lot about the long-rumored device, and finally, up to a certain extent, things are confirmed. 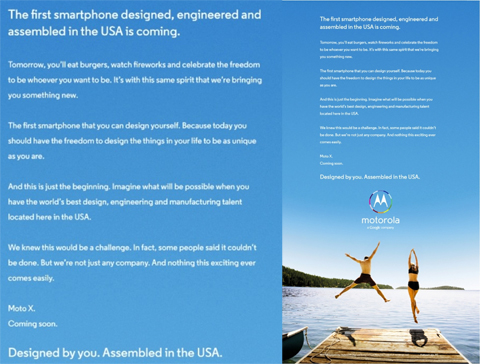 The Moto X will be the first smartphone designed, engineered & assembled in the USA, and Motorola also states that, while it is a challenge, you can design the smartphone yourself.

We’ve been hearing a lot of rumors for the past months about the Moto X being a build-to-order program already, and whether “designing the smartphone yourself” is about external design or hardware specifications is still unknown.

While the Google Play Store isn’t available yet for the Philippines, it is fun to imagine that just by visiting the site, you can buy the phone that features the specs that you need & the design that you want – all under your budget and you get to walk away with it just like that.