The Department of Transportation and Communications (DOTC) has started the pilot testing of the new ticketing system at LRT-2 Legarda Station. 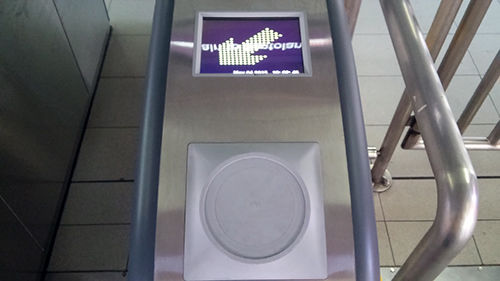 The modernized ticketing system – which makes use of a new card called “beep card” – is the first transport public-private partnership project (PPP) between DOTC and AF Payments who won the Php1.3 billion contract for the new Automated Fare Collection System (AFCS) project.

Under the AFCS agreement, AF Payments will put up and maintain 731 gates, 138 ticket vending machines (TVM) and 212 point-of-sale devices on all LRT-1, LRT-2 and MRT-3 stations.

. . . one of the first users of the new beep card ticketing system at Legarda Station. pic.twitter.com/O3sNoPORHC

During the pilot testing phase, a limited number of beep cards are only sold at LRT Legarda Station for Php20 through a designated window or the two ticket vending machines, but will be available on all LRT stations after the testing phase.

The new “beep cards” are embedded with microchips instead of magnetic stripe found on old cards. This will allow for a more seamless payment system for commuters, as well as extend the longevity of the card.

The beep cards are used as a stored value card and are valid for use up to 4 years. Commuters can purchase top-ups for their beep card ranging from Php12 (minimum) up to Php10,000 (maximum). Meanwhile, single journey tickets are available in Php15, Php20 and Php30 denominations.

Php1.3 billion contract for the new Automated Fare Collection System (AFCS) project? Isn’t it better if they used that to buy new trains instead?

Mr A
Reply to  Amane

It’s a PPP by the Government and Ayala-MVP deal. The government did not pay a single cent on this project.