A couple of days ago, Acer Philippines introduced to us their new campaign for the Acer I.T. Doctor and handed us their latest Windows 8.1 tablet, the Acer Iconia W4.

The Iconia W4 was first introduced back in December (see our story here).

With a suggested retail price of only Php18,990, it’s probably the most affordable Intel Bay Trail-touting Windows 8.1 tablet to date.

The bundle comes with a wireless Bluetooth keyboard and a carrying case that doubles as a stand. With the keyboard always on board, the Iconia W4 can practically replace a typical netbook. Connect it to a mouse (either via Bluetooth or via the microUSB port which comes with a full USB adaptor) and you’re set to do anything you want, even as far as play a game of DoTA.

The Windows 8.1 tablet has an 8-inch display with HD resolution (1280×800 pixels) using IPS technology and looks much better than most other netbooks or laptops.

The device has a bit of heft (430 grams) for its size and also not very thin (10.8mm) but even when you combine it with the keyboard and the case-stand, it’s still manageable and portable. 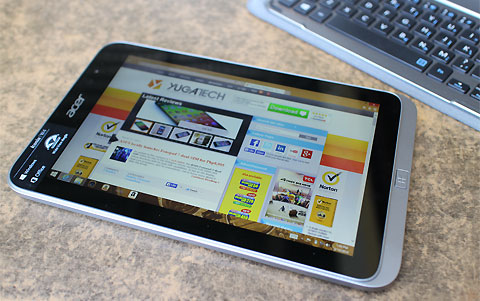 The tablet-netbook only has a 32GB internal storage for the OS and other software application but you can still upgrade the capacity with 32GB more via a microSD card slot (limited to file storage only though).

There’s a micro-HDMI port so you are able to hook it up to a monitor or bigger display using an HDMI cable.

The budnled keyboard is quite small to match the size of the display. It’s usable but might take a bit while to get used to especially if you’re used to speed-typing.

The Iconia W4 comes pre-installed with Windows 8.1 including a free, lifetime license of Microsoft Office 2013 Home and Student Edition (worth Php4k). 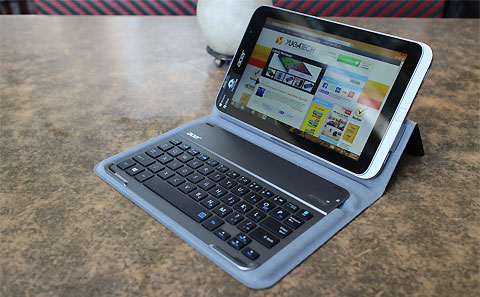 Acer promises up to 8 hours of battery life on a single full charge. Based on previous experience with similarly-specced tablets, it can achieve that time with light to moderate use.

With an SRP of only Php18,990, the Iconia W4 bundle is looking to be an attractive and affordable offer to folks looking at entry level Windows 8 tablet for productivity and portability.