First introduced back in June 2014 during Computex in Taipei, the Transformer Book T300 Chi promises to be the thinner hybrid tablet and laptop for Asus. It is also during its launch that we heard of the Intel Core M processor for the first time. There are actually two models of the Transformer Book Chi. One is the T100 which is a 10-inch model running Intel Atom processor while the other one is this 12.5-inch version running Intel Core M processor. The one that we bought for this review which will also be the one scheduled for launch next week is the T300.

The T300 Chi is basically a more powerful version of the original and very popular Transformer Book T100 (while the T100 Chi is the direct successor) with two main components — a fully functioning Windows 8.1 tablet and a passive keyboard dock. While other Windows tablet has optional keyboards to go with them, the T300 Chi has dedicated bundled keyboard putting its category classification closer to an ultrabook. At first glance, the T300 Chi looks like a typical laptop or ultrabook crafted in a full metal body with very slim and sleek design. It resembles the venerable Zenbook line of laptops popularized by Asus also it also shared the same genetic codes as the Transformer Pad.

Asus also introduced a 12.5-inch display with the T300 Chi, a conservative size between the traditional 11.6-inch and 13.3-inch which they could have found to be the sweet spot for this form factor. With a full HD IPS LCD, the display looks bright and stunning (we learned that Asus is not releasing the WQHD version in the Philippines). 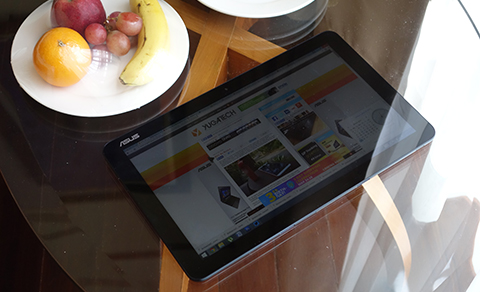 The screen is detachable from the keyboard dock and works stand-alone as a Windows 8 tablet which is somewhat huge for a tablet but still comfortable enough to hold and use as a daily driver. Because of the slim profile, all the ports around the tablet are miniaturized — a microSD card slot at the bottom end; a micro-HDMI, micro USB 3.0, and 3.5mm audio port ont he right side, power button on top, volume controls and Windows button on the left along with a micro-charging port. 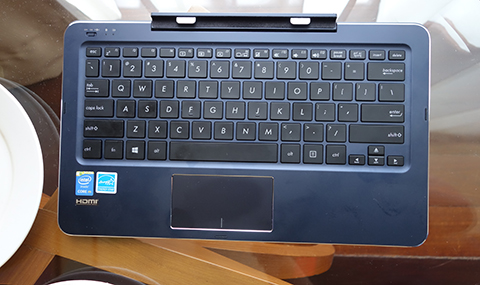 The keyboard dock connects to the tablet via two metal latches that locks it in place and lined up with a magnetic lining to help keep it more stable. Communication between the keyboard and the tablet is only via Bluetooth which will allow you to use the keyboard regardless if the tablet is docked or not.

There’s a Bluetooth switch on the keyboard so you can manually turn off the connection in order to conserve battery on the dock. The dock does not add any battery support to the tablet but has its own small reserved battery to power the Bluetooth connection (which you can recharge via a micro-USB port).

However, if you compare the tablet alone (1.56lbs) to the Surface Pro 3 (1.76lbs), you will realize that the T300 Chi is still lighter which brings us to the conclusion that the Keyboard dock significantly added to the bulk weight of the setup. When docked, the display wobbles a bit on its place which can be disconcerting at times. 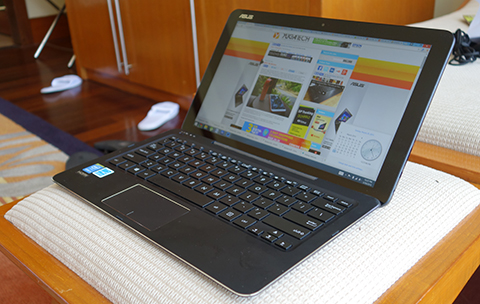 Fortunately, the keyboard dock is very well made with appropriately sized keys. The keyboard is easy and comfortable to use with just the right spacing and travel. Even for a smaller space, we found it’s comparable to the keyboard of the Macbook Air and more accurate than the keyboards of the Aspire S7 (11-inch) and the Zenbook UX21. The trackpad is also good with enough sensitivity and traction for navigation. Our only complaint though is that the trackpad area is a bit cramped.

The big promise for a balanced performance and battery life is committed by the Intel Core M processor. The 5Y71 uses the latest 14nm process and runs at a base clock of 1.2GHz (dual-core, 4 threads) but can boost to speeds up to 2.9GHz. It has a low-power consumption of just 4.5W which is much lower compared to a 5th-gen Intel i3-5020U at 15W but with comparable performance. This means you will get your required power when you need it yet still be able to reduce power consumption. 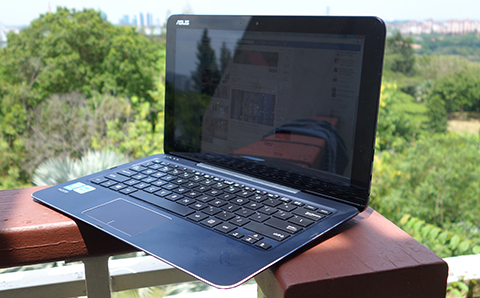 With the promised 8 hours battery life, we were expecting somewhere close to that in our actual use. Certainly enough, we managed to hit around 8.5 hours on a full charge but that’s with ultra power saving mode (no WiFi, 20% brightness and mostly office productivity like MS Word and Excel).

On moderate use (with the WiFi on, working on multiple Chrome tabs, photo re-sizing on Adobe Photoshop), battery life drops to a disappointing 4 hours. With this battery performance, we’re not really seeing any significant difference compared to other ultrabooks running Intel Core i5 or i7 processors. Perhaps, this performance is due to the fact that Asus had to cram Li-Po batteries into a much smaller space on the tablet. 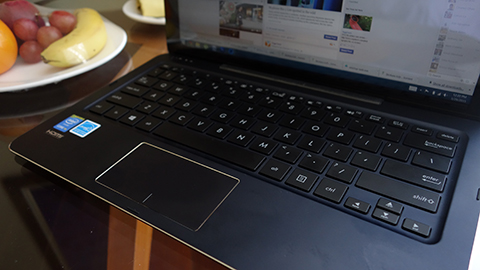 The Transformer Book T300 Chi supposedly offers a really good concept — thinner and lighter than your typical ultrabook, comparable performance to a Core i3 or Core i5 with much better battery life than the 7 hours most 2014 ultrabooks promised, all cooked up in a very elegant and beautiful body.

The miniaturized ports also requires you to bring along several adaptors for the microUSB (to USB Type A) and the HDMI. This means you also need a USB hub if you want to plug several USB devices to the laptop at the same time. All things considered, the T300 Chi may need some polishing in a few places. Asus may need to work the gross weight to put at par with most ultrabooks in the market and perhaps push for much better battery life.

At this juncture, we are looking at the Transformer Book T300 Chi as a direct competitor to the Surface Pro 3 but with a form factor that’s much closer to ultrabooks, like the Zenbook. It’s a really nice idea, a concept that offers something more than your typical laptop or tablet, but it’s a pretty hard trick to perfectly execute. Asus is on the right track and this first iteration of the Chi is already a looker and a good first try. We think Asus can do much better on the second generation. 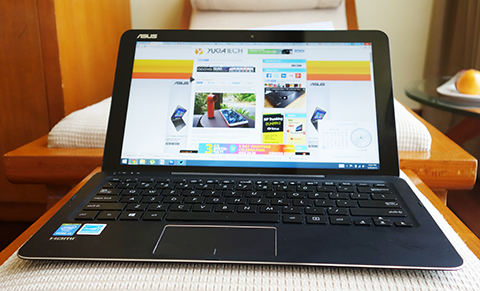 The Transformer Book T300 Chi will be launched in the Philippines on April 7 with a suggested retail price of Php39,995 for the 4GB model and Php47,995 for the 8GB model. Local stores like Villman are already carrying them since last week.

What we did not like:
* Disappointing battery life
* Wobbly display cradle
* No backlit keyboard
* Small trackpad
* Tablet and keyboard combo a bit heavy