We ended the first part of our tablet comparison with the iPad Mini with Retina Display enjoying a 3 to 1 lead over the Android competitors. Now let’s proceed with second installment where we’ll look at the other aspects of the tablet and announce the victor of this head-to-head comparison. 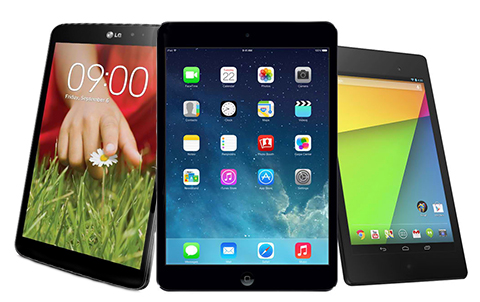 Sound output has always been a subjective opinion and to be frank it’s really difficult to definitively conclude that one is better than the other in this category.

For an average user, the difference in audio quality is nearly indistinguishable. However, instead of just giving each candidate a point, we decided to do a little research to find out which excels in this area. Luckily, the folks over at GSM Arena provided a very detailed comparison between the sound output of these three candidates. Here are the results based on their audio test:

However, if you need more information about each of the parameters in the chart, just head on over to this link.

In a less technical term, the chart tells us that the iPad Mini 2 is the more well-rounded performer compared to the other two slates. But as we’ve mentioned earlier, unless you have a very sophisticated ear, the difference between the three contenders are very marginal.

The three slates on our list have the same 5MP camera on the back that also shoots 1080p videos with 30fps frame rate. Moreover, all the tablets have an accompanying 1.2MP camera on the front that records 720p videos.

Based on our experience, the image output in well-lit condition are almost identical to each other. But in order to pick a victor in this criterion, we delve a little deeper to find out which one has the better camera setup both in the hardware and software standpoint. 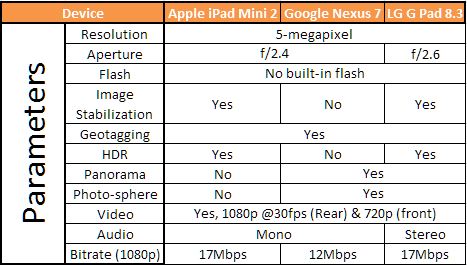 As you can see, the contest is a tightly contested one. However, the LG G Pad walks away with the award on this one despite of its slightly narrower aperture. The reason for that is the Stereo quality audio on the video recording which is notably missing on the other tablets.

It’s a bit of a tossup in the processing segment. On one end we got two candidates (N7 and V500) sporting a quad-core Snapdragon 600 processor with 2GB of RAM. On the other hand, the iPad Mini 2 is equipped with a 64-bit dual-core processor with 1GB RAM and accompanying M7 processor.

Real-world usage aside, one can make the argument that the new iPad Mini has the least amount of firepower on paper than the rest of the gang, making it a two-horse race between the G Pad and Nexus 7.

Above is a side-by-side comparison of the benchmark test result we got from the LG G Pad 8.3 and Google Nexus 7 2013. Despite having an almost identical configuration, the former fared better in the test compared to the 2nd Generation Nexus tablet.

Unlike the other categories we’ve tackled so far, this one’s pretty lopsided for the LG G Pad. That’s because it’s the only tablet that has an expansion slot for a micro-SD card among the candidates. Sure you can opt for 128GB iPad Mini 2, but then you’d have to shell out a hefty amount of dough to get one.

Speaking of price, I think we can all agree that Nexus 7 2013 reigns supreme in terms of pricing. The 16GB version currently retails for USD229 while the new iPad Mini and G Pad costs USD299 and USD329 respectively.

We’re down to our last category and it seems that the iPad Mini with Retina Display will come away victorious as it lambasted the other two tablets in terms of mileage per charge.

The iPad Mini 2 benefited from the 45% bigger power pack compared to its predecessor, allowing it to last almost 11 hours of continuous web browsing over Wi-Fi and more than half-a-days’ worth of 1080p video playback.

That concludes our rather lengthy comparison between the Apple iPad Mini with Retina Display, LG G Pad 8.3 and the ASUS Google Nexus 7 2013. The iPad Air’s smaller sibling won the contest by a hair with the LG G Pad 8.3 coming in a close second place.

This is not to say though that 2nd Gen Nexus 7 is any less spectacular than the two aforementioned slates. In fact, it’s still a force to be reckoned with primarily because of its cheap price tag and reliable software update from Google. 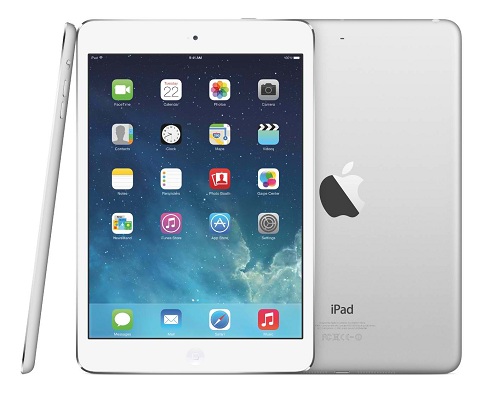 That said, if you’re in the market for a tablet that’s 10-inch below, the iPad Mini 2 is your best bet. But if iOS isn’t exactly your cup of tea, then the LG G Pad 8.3 will certainly be a good alternative.

Yet another apple fanboy review.

Omigad.. comparing 2 oranges and an apple!! What a bull.. doesn’t work that way. Simply put, the OS really is the primary selection criteria. If the user is wanting an IOS-based ecosystem, then really there’s just one way to go. If he prefers android, then by all means go ahead and compare all android tablets for us to have a good read and and see which one is better than the other.

But really, “telling” (or should I say subliminally suggesting) a user to go the IOS way because the ipad wins the tablet comparison way is just… so dumb. Please do peer comparisons. :)

The A7 beats the Snapdragon 800 in benchmarks (basa basa rin ng anandtech pag may time). The other two tablets, they only have Snapdragon 600. He just assumed just because the iPad mini with retina display has a dual core with 1 GB of RAM that it’s automatically inferior.

iPad mini wins by a hair? More like it has at least double the score of the closest competition.