Upcoming Nexus X is by Motorola, with kick-ass specs

A recent benchmark in Antutu has revealed what could be the next Nexus smartphone is and some details show it will be made by Motorola. Dubbed the Nexus X, the smartphone will be powered by a 2.7GHz quad-core Snapdragon processor and Adreno 420 graphics. 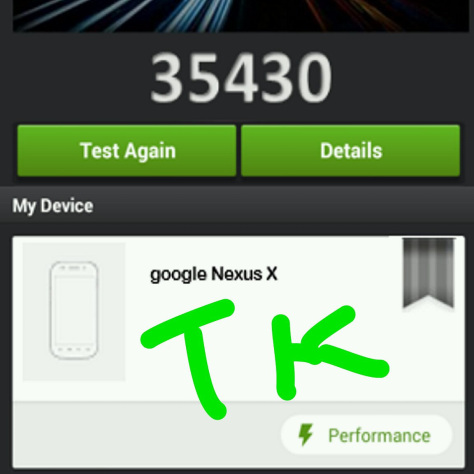 Though the display size is unknown, the Nexus X will have the same quad-HD resolution as the LG G3 — 2560×1440 pixels. That’s probably the reason why the Antutu score is not that high despite the Snapdragon 805 APQ8084 chipset used in this device (same lower-than-expected results with the Antutu scores of the G3).

The device will also be running Android 5.0 (Android L) and will have 3GB of RAM, 32GB of internal storage and a 13MP rear camera.

i heard a 5.9 in screen for the new nexus? gusto ko yan. sana cheaper lang sya

If this made by Motorola then this will not be available nationwide because they lack wide distribution here in the Philippines.

iPhone 5s: 64-bit flagship phone, released 2013. I don’t think android manufacturers will resort to 64-bit yet. The cost is too high for now and might sacrifice the profit from the production cost unless every android products will go Xiaomi style on selling.

I want one. Hope the price is around 25k at the gray market.

What is kickass about that specs. Typical specs for a 2014 flagship.

Let me put it in a nice table:

NEXUS is about putting a decent flagship with excess cost. Compare the priceponts

i stand corrected.. Nexus phones are about flagship specs without excess cost..

what can i say nexus fanboy ako…

So with that benchmark plus android L(which said to have butter-smooth interface as iOS) will be the next big thing for motoral? put a better battery and maybe a 64GB(or 128GB for even better) internal memory.