Around this time, the partial unofficial results of the tabulation of votes coming in from the COMELEC Transparency Server shows Mayor Rodrigo Duterte is going to be the new President of the Republic of the Philippines.

Duterte is getting around 37% of the total running votes, 4% higher than his most recent ratings (33%) in the last survey. 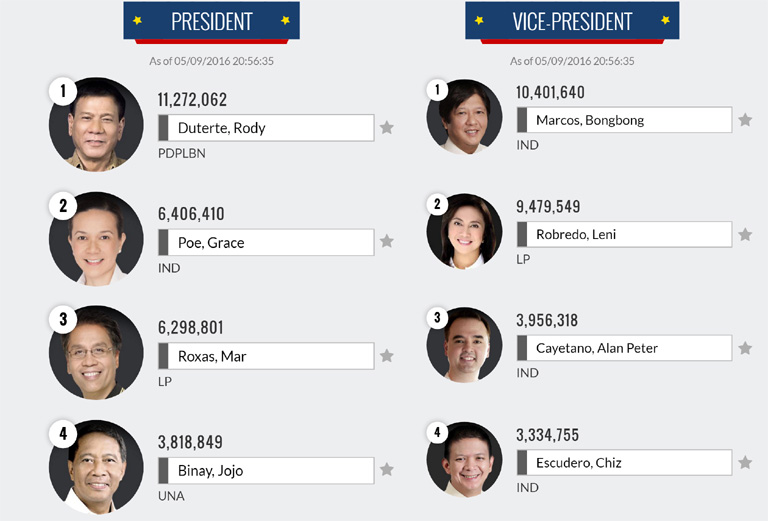 Mayor Duterte’s name came from nowhere and he was a last-minute entry into the presidential race. Way before his candidacy, VP Binay was leading the early polls with Sen. Grace Poe taking over the spot in the first couple of months leading into the campaign period.

Duterte had single-digit ratings (~5%) but slowly crept to the top with 33% rating until the last surveys. From being a local mayor to becoming a President, Duterte takes the record for the biggest jump in elected position in recent history, trumping Binay’s record from being Makati Mayor to Vice President in the 2010 elections (not counting Cory’s ascension to the presidential seat).

What is most interesting in the 2016 Presidential Elections is the role of social media in shaping the minds and ballots of the electorate.

Duterte’s position was against the incumbent party (LP) with a huge machinery, billions of pesos in campaign funds, endorsement of the Pres. Aquino and many big names in civil society. This is evidenced by the 9.7 million votes running-mate Leni Robredo has gotten as of this time.

From the get-go, LP’s Mar Roxas had the most enviable position in the race but unlike Binay or Grace, he never topped any credible surveys during the entire campaign period. 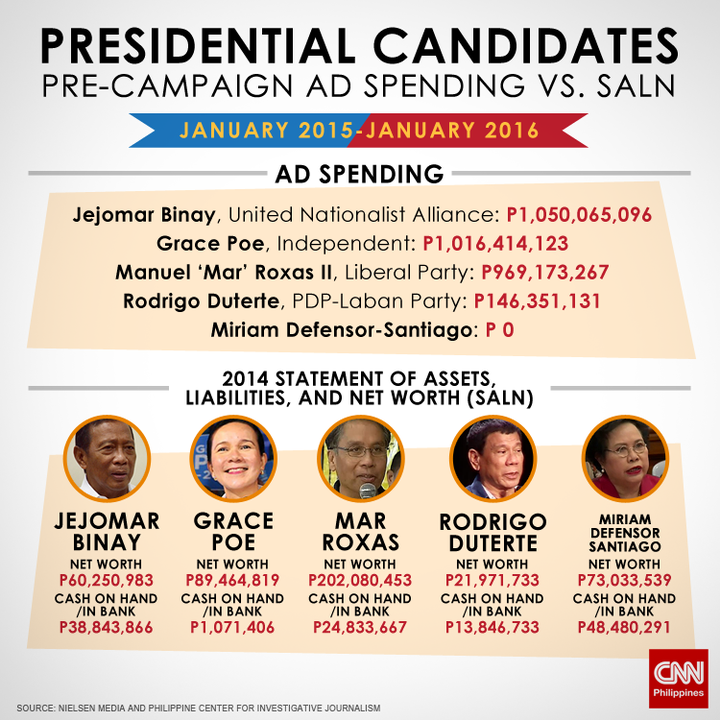 Looking at the campaign spendings along, Roxas, Binay and Poe each spent a billion pesos between Janaury 2015 to Janaury 2016. The numbers would have further balooned by May 7, 2016 which is the last day of election campaigns.

The mayor’s only promise is “radical change” and his primary tool is Facebook. Based on Facebook data reported by ABS-CBN’s Social Media Center, Duterte got the biggest noise in Facebook with over 80 million interactions since November of 2015 coming from over 10 million unique FB users.

Duterte has more than 2.9 million fans on his Facebook Page with Grace Poe edging him at close to 3.1 million and Sen. Mirriam Santiago a far 3.6 million. Binay has 2.7 million while Roxas is behind at only 1.44 million.

All fan pages are very active and highly engaged. Where Duterte took the lead is with the thousands of volunteers spreading news (legit or otherwise) and creating engaging content about him and Davao city. With over 45 million Filipino Facebook users, the social media platform has become the biggest political stage and Duterte was killing it.

Like it or not, Duterte is going to be the next President and Facebook made a huge contribution.