Philippine Airlines now with WiFi and Cellular on board

Philippine Airlines now with WiFi and Cellular on board

Last April, Philippine Airlines (PAL) announced that they will start offering in-flight WiFi internet and call/test roaming in some of their regional routes by mid-year. It’s already July and we’ve now seen them putting this service in place.

On board a Boeing 777-300ERs this afternoon, we saw the service work during our 3-hour flight from Bangkok to Manila. 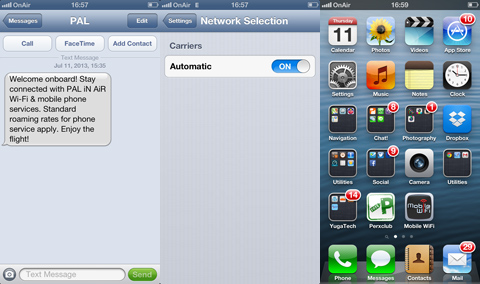 There’s actually a cell signal which your phone registers to when it’s set to automatic. The carrier is labeled OnAir and you get a welcome message once connected. Rates are similar to international roaming (not sure which one but could be from originating country?). 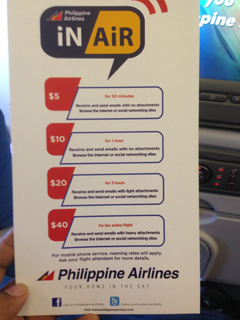 As for the WiFi internet, charges are on time-based billing:

If you have multiple devices, you can log in on the web-based system and connect them as well without additional charges.

Of course, the airline will still enforce the turning off of devices during taxi, take-off and landing of the plane. The service will only start working when the plane reaches the 37,000 feet altitude (around 20-30 minutes after take-off) and will be disabled upon descent.