Wi-Fi hotspots make it possible to establish Internet signal in an otherwise dead spot and become the main hub where devices could connect to in order to access the Internet. We’ve seen different forms like vending machines but this nifty (and sleek) gadget aims to turn your car into a moving hotspot for a total of 10 devices that can connect simultaneously. Here’s our take on the Huawei CarFi.

At first glance, you might think you’re seeing a familiar design but just couldn’t put your finger on it. This might be because the overall shape of the device was patterned after the general form of a golf club. The core components, according to Huawei, were made with fireproof materials although it’s unclear as to how exactly this unique feature would come into play in real life. Did they want to protect the device even if the car was already burned down? We’re not sure either.

In addition, the face has been treated with carbon fiber for enhanced durability, while a chrome lining surrounds the device and positively adds an accent. The main and only button sits on the face and screams the company’s logo. 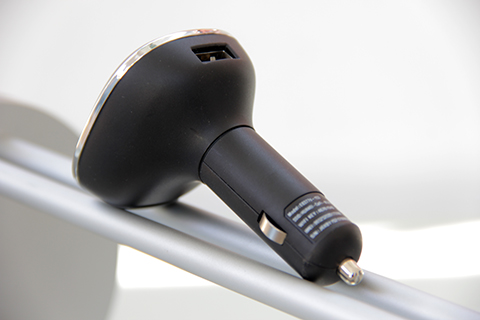 The CarFi is powered by connecting it straight to the DC port of the car where cigarette lighters are usually plugged in. It doesn’t have a built-in battery whatsoever so it solely relies on a power outlet. Once powered up, it can charge other devices through a USB port found at the top. In addition, the device outputs 5V/1A of power.

A flap is located at the front of the device that opens to reveal a micro-SIM card slot. 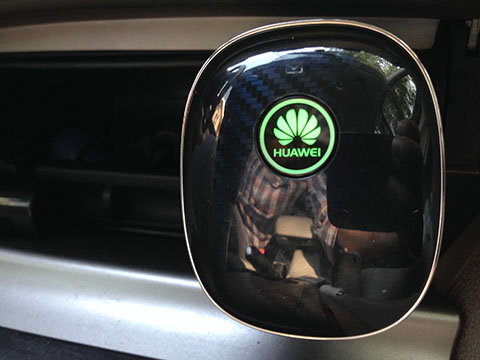 After inserting a SIM card into its allocated slot, the CarFi is ready to be used. Simply plug it into the car’s DC outlet and hold the power button for a few seconds until it lights up. 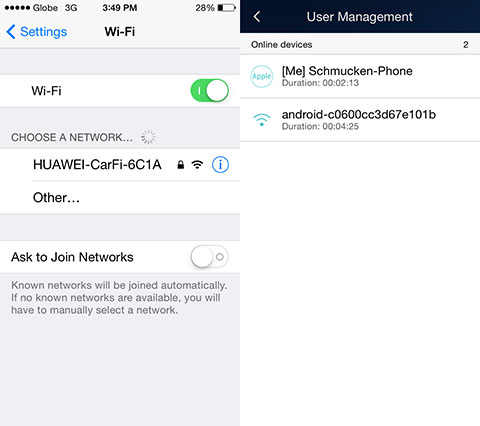 On our device, it quickly detected the CarFi and we had no problems setting up a connection. We also downloaded the Huawei HiLink for free which is a proprietary app to access the company’s lineup of routers for data monitoring and other functions. Here, you can also keep track of who is currently connected to the CarFi (seen above). 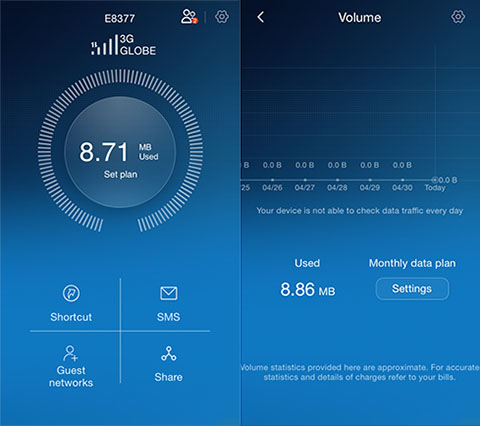 As mentioned earlier, this specific hotspot can handle up to 10 devices connected all at the same time. But of course you’d all be dividing the Internet’s bandwidth and with our intermittent/sluggish connection here in the Philippines, it only translates to slower browsing for everyone. 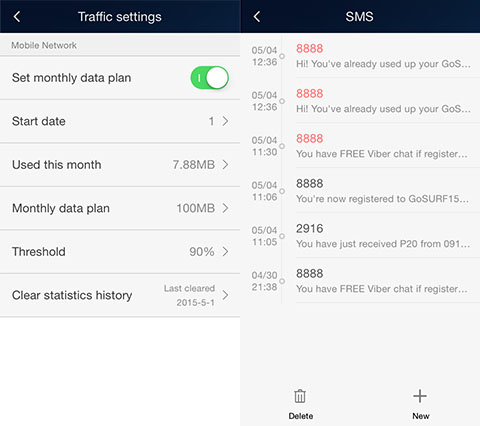 Shown above are some of the features the app can perform while you use the CarFi — you can set a limit for your data usage, use the app to text and register your prepaid SIM, and further monitor other statistics essential for data connection. We connected a laptop to the CarFi and ran a speed test. We were then able to reach a peak download speed of 7.53Mbps and an upload speed of 0.59Mbps. For this test only one device was connected so data allocation is enjoyed by the laptop only and that we can maximize the test result.

The SIM card we used was 3G although it can accommodate LTE SIMs — meaning the test result could still be faster depending where you are and what kind of SIM you use (above result was in Bacoor, Cavite area). In addition, the company claims that its 4G connectivity can reach speeds of up to 150Mbps.

As for real-life usage, we were able to browse the Internet nicely while we had three devices connected to it. The car was moving during browsing but we didn’t come across any dead spots and the connection was actually stable. 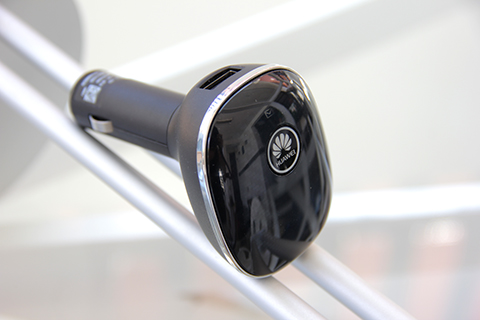 Using the CarFi was actually convenient and reliable, although we do have a gripe against its lack of battery supply. This is because the device solely depends on the power it gets from the car. Once you turn the engine off, the hotspot is left powerless. So when we needed to gas up and turn off the engine, our Internet connection was also interrupted.

This, for us, still gives pocket Wi-Fis an edge over the CarFi since they basically do the same thing — only the portable WiFi has a packed battery and you can bring it around and still stay connected even after getting off the car.

For its target market, we see it being appealing to people who always enjoy a good road trip and even for individuals who need to finish last-minute corrections or send emails while inside the car (with someone else driving, of course).

The Huawei CarFi has a regular price of Php5,990 but it’s been discounted to Php4,990 over at Lazada.