Been hearing about all that in-flight WiFi in the US for a year now and we’ve also reported that local carriers Cebu Pacific and PAL will also offer them. This time, we got to try the in-flight internet service during our trip from Orlando to Detroit.

Was flying Delta all the way from Manila to Nagoya, to Detroit then Orlando but the WiFi service was only available between Detroit and Orlando. 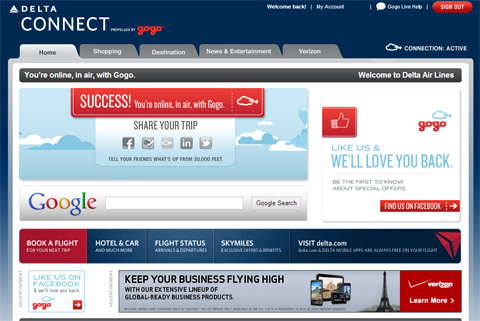 The WiFi is powered by Gogo and you can subscribe to the internet service based on a per hour, per flight or even monthly basis. The monthly fee is about $40 for unlimited use but if you want to just try it for a bit, it’s $3 for 30 minutes, $6 for 60 minutes (plus free 30 mins) and about $8 for the duration of the entire flight (2.5 hours from Detroit to Orlando).

You pay via credit card and can start using it about 20 minutes after the plane has taken off. The speed is decent, I tested around 437Kbps using 2Wire.

If they could also offer this for the entire duration of my 13-hour flight across the Pacific, that would have made the trip more bearable.