ROG Ranger BP3703: A gaming backpack for those who want more RGB

ROG Ranger BP3703: A gaming backpack for those who want more RGB

Gaming backpacks are common nowadays, but these things are still an important part of a techy person’s gear especially if they need to carry tons of gadgets. Thanks to its spacious interior and multiple pockets, you can almost bring anything. From a large gaming laptop to a tiny pen, there’s a dedicated space for it inside. But when it comes to design, they almost look the same. Except for this one. What we’re talking about is the ROG Ranger BP3703. It’s not exactly new, as this model was unveiled last year. There were also older designs that came out in 2019. Still, it’s the kind of backpack you won’t see every day. 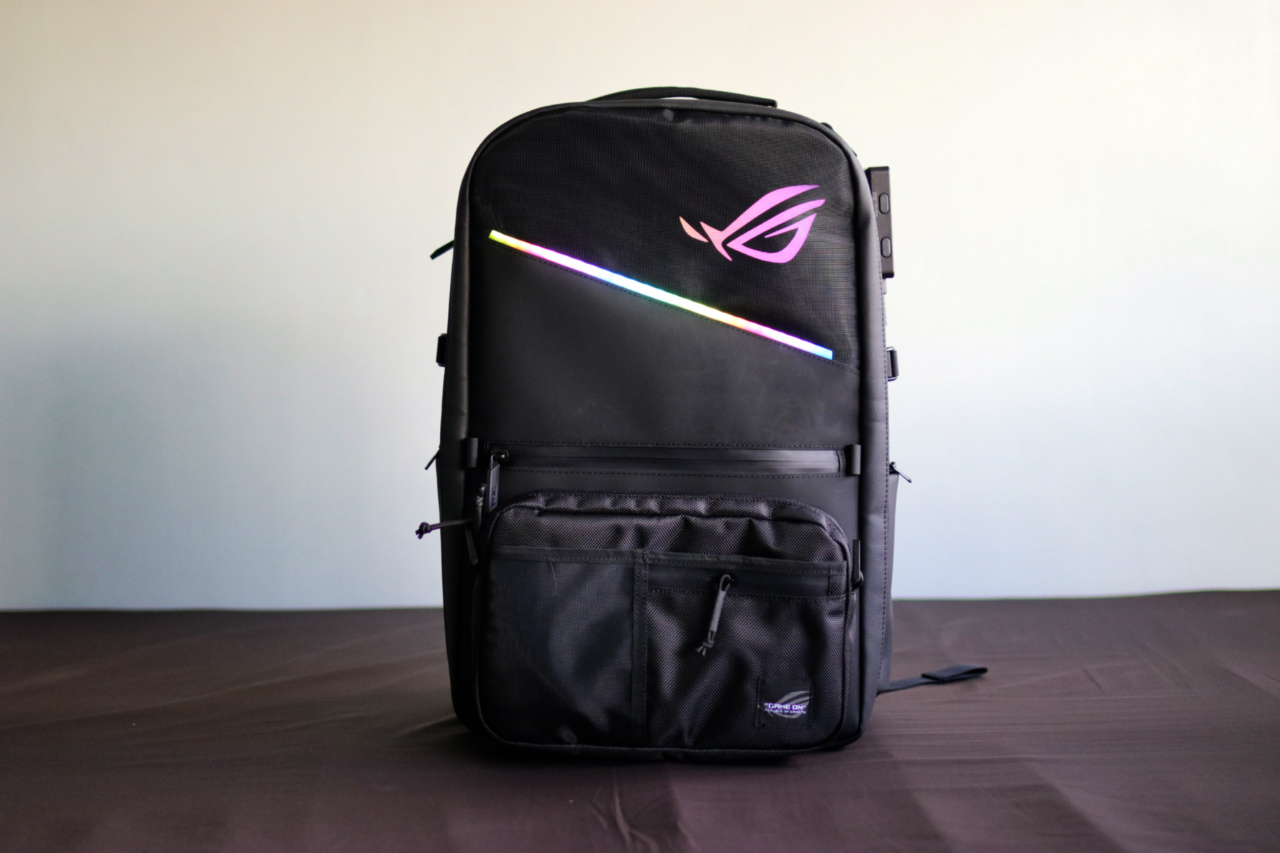 At first glance, it looks like your typical gaming backpack. Kind of bulky, and lined with plenty of zippers, straps, and compartments. There’s the ROG logo on the front and a slanting strip across, which, as you know by now, lights up. But we’ll get to that later. 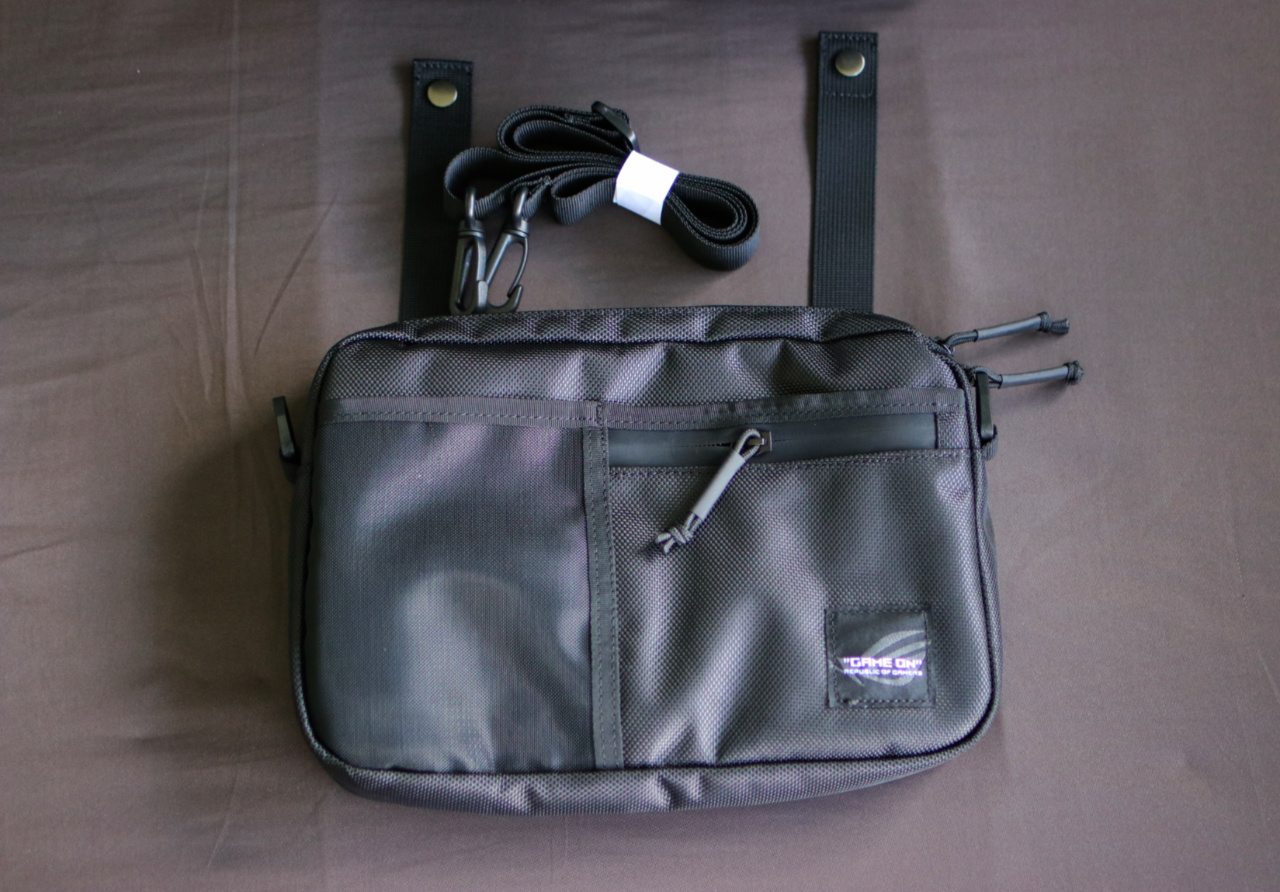 Also found here is the modular front compartment that doubles as a messenger bag with an RFID-blocking pocket if you want to travel light. You can attach and remove it using two built-in straps. It can fit items like your wallet, smartphones, passport, power banks, and similar small items. 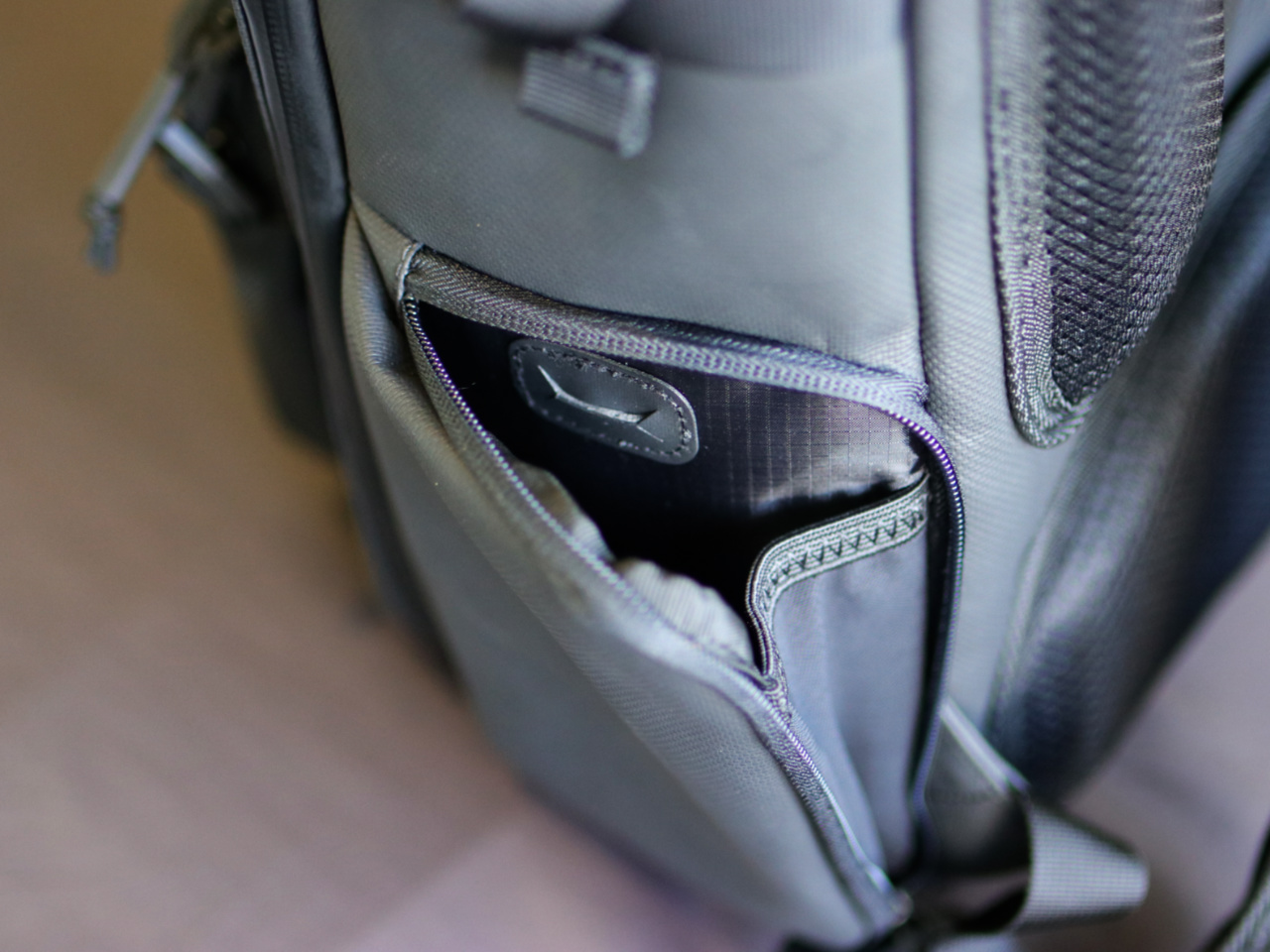 Going back to the backpack, it has zipped pockets on the left and right sides, with a cable-passthrough slot so you can charge your mobile device without bringing your power bank out. 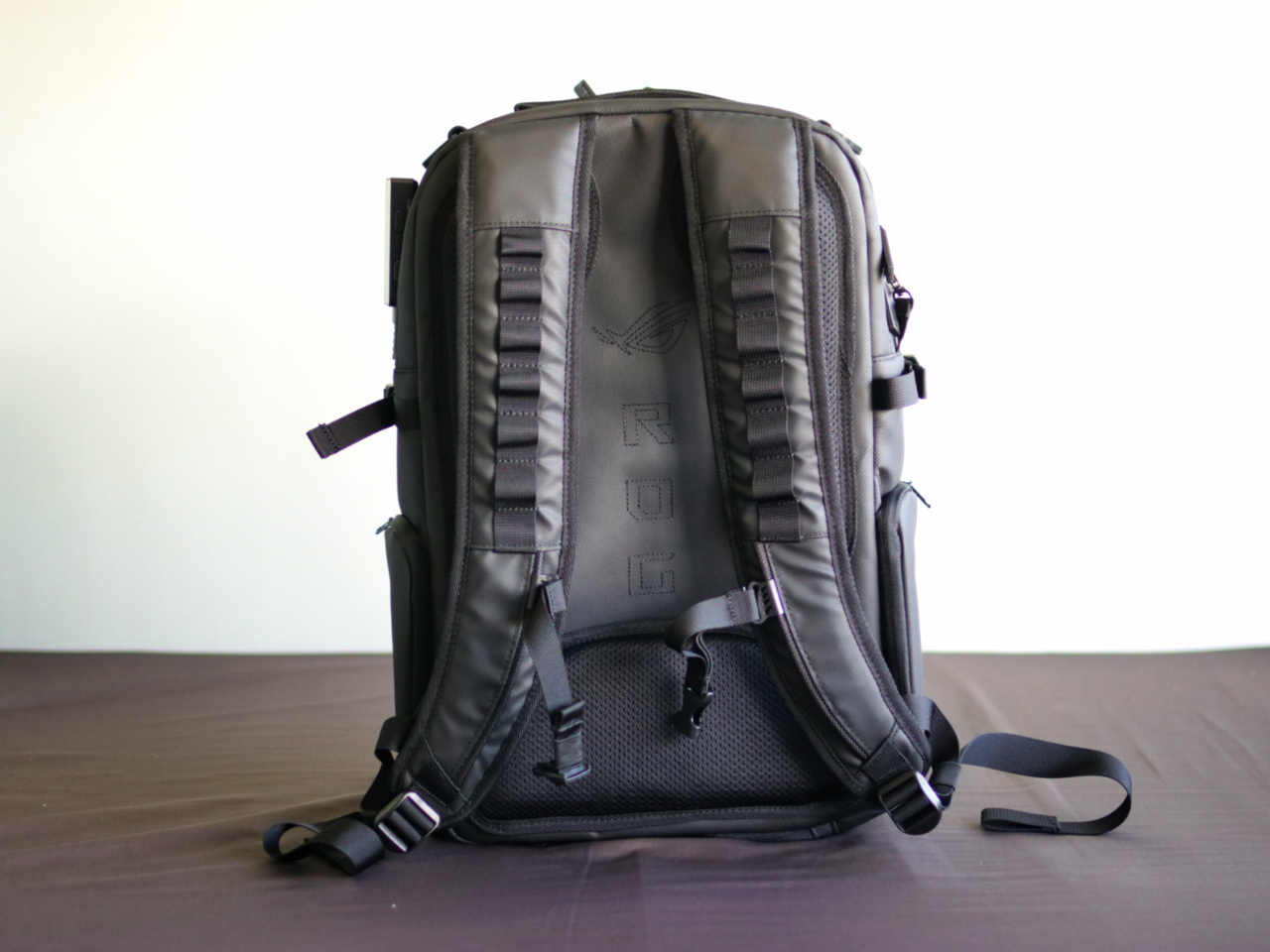 At the back, we can see plenty of breathable air-mesh padding, including the shoulder straps and ROG stitching in the middle. The straps come with loops so you can attach other equipment on it, like a portable speaker or sanitizer, or anything you can hang on it that you need quick access to. It also features a chest strap for more stability and comfort. The lower padding also functions as a luggage strap. 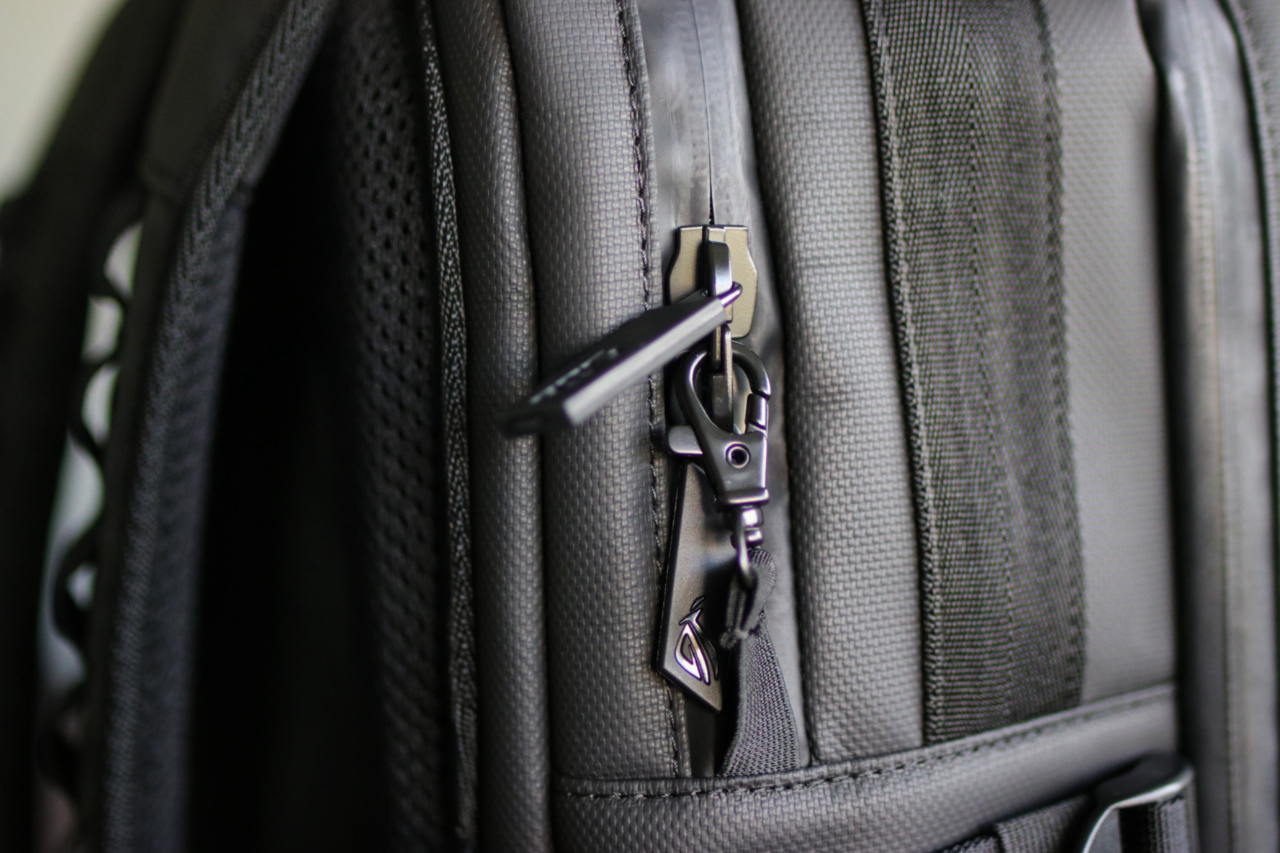 When it comes to materials, the ROG Ranger BP3703 uses 1680D ballistic nylon fabric, which is a rugged material with high anti-abrasive properties. Although tough, it feels like a combination of rubber and plastic but soft with a slightly rough texture. It’s water-repellent, scratch-resistant, and doesn’t attract fingerprints. 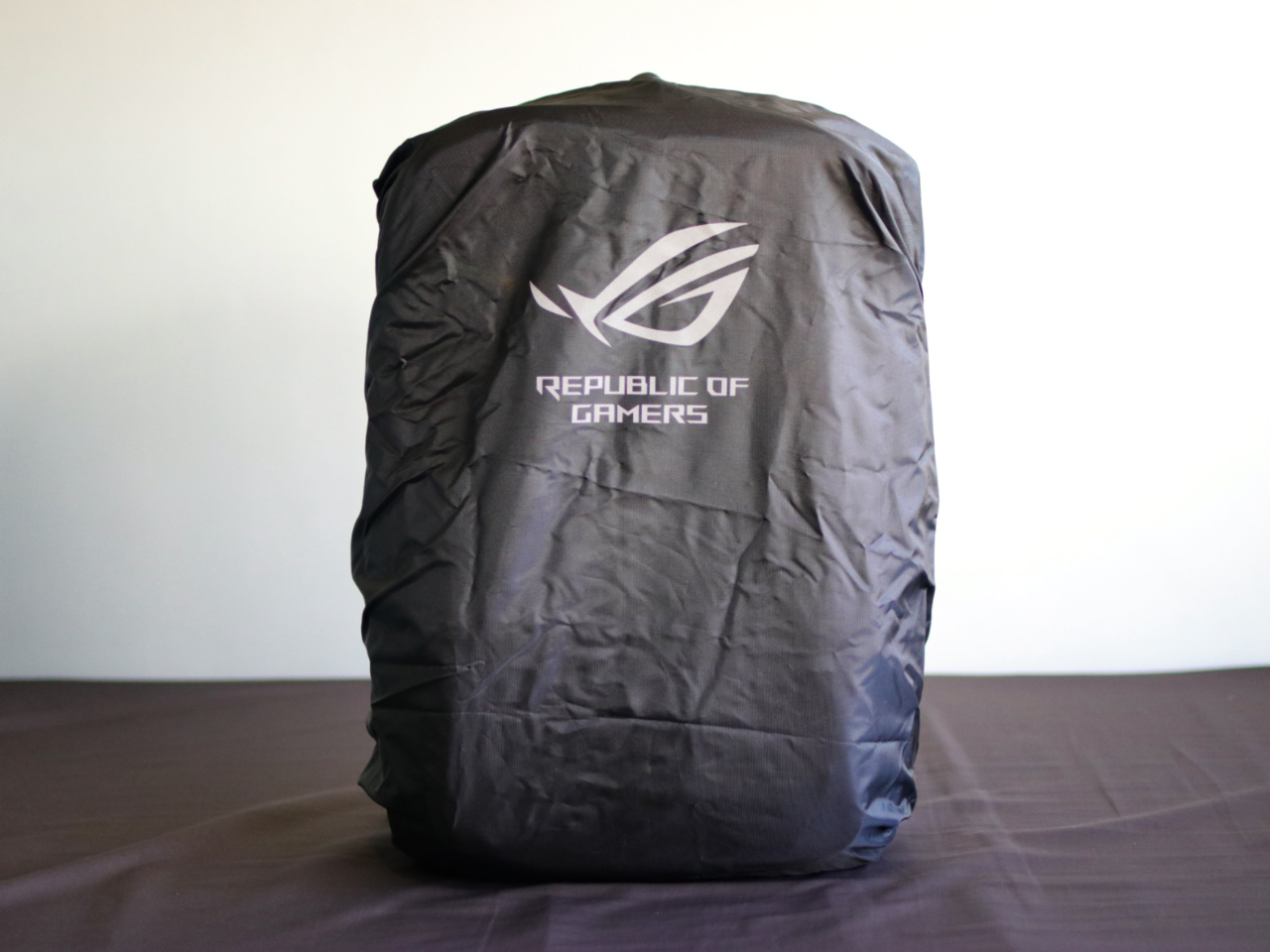 The zippers are also water-repellent, but if you want better protection, the backpack comes with a reflective rain cover, which is stored underneath, so you can protect the backpack from heavy rains or dust. 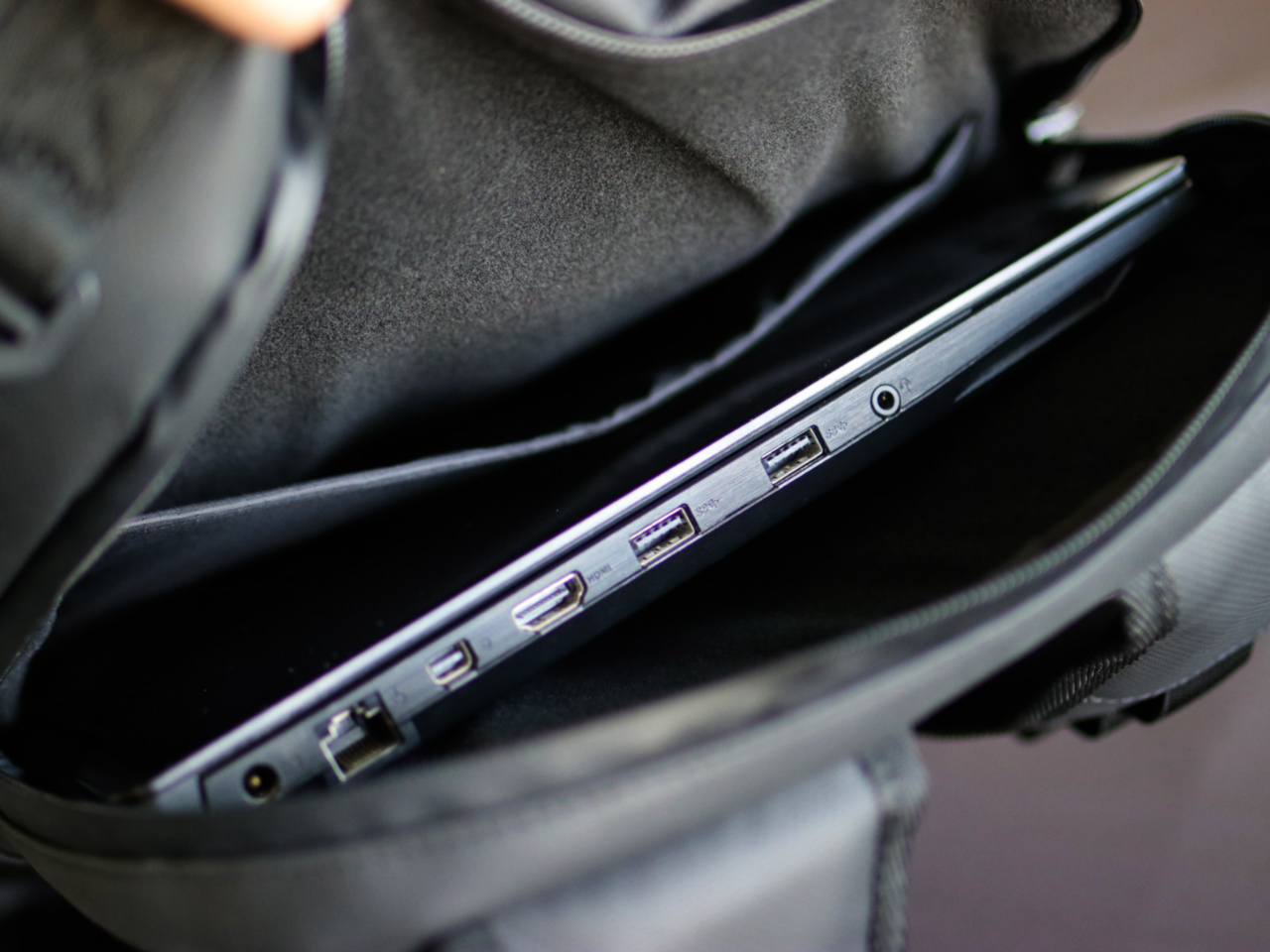 We got two zippers to access the inner compartments. The backpack has a 20L capacity and has enough room for up to a 17-inch laptop. The rear compartment is for the laptop and is fully padded. There’s also a provision for storing a tablet. 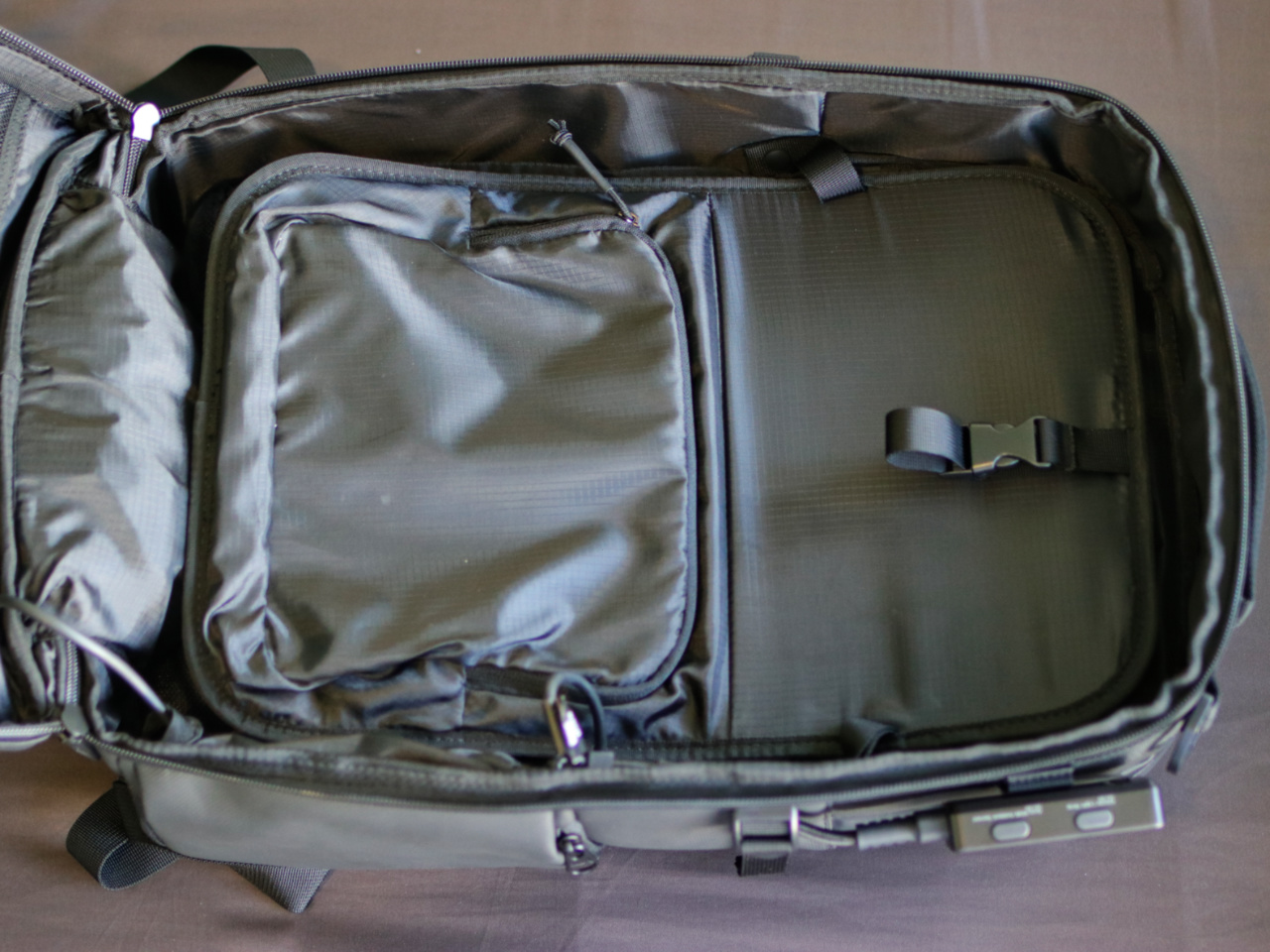 As for the middle compartment. It’s more accessible thanks to the suitcase-style opening, meaning you can unzip it all the way down, so you can easily put more stuff like your keyboard, mice, power bricks, headphones, and other items. 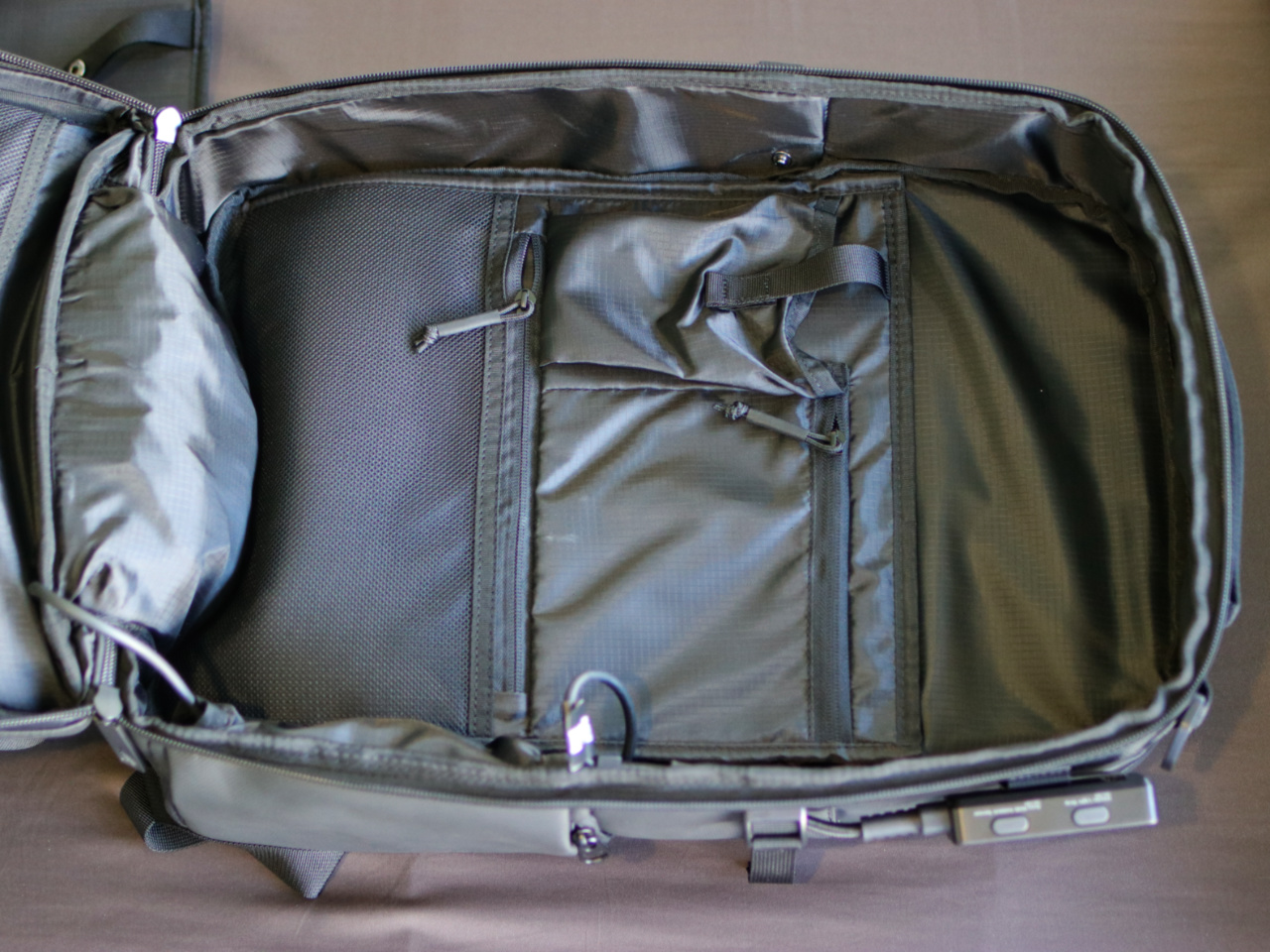 It even comes with a modular partition that can store more items and also prevents items from scratching or bumping to each other. 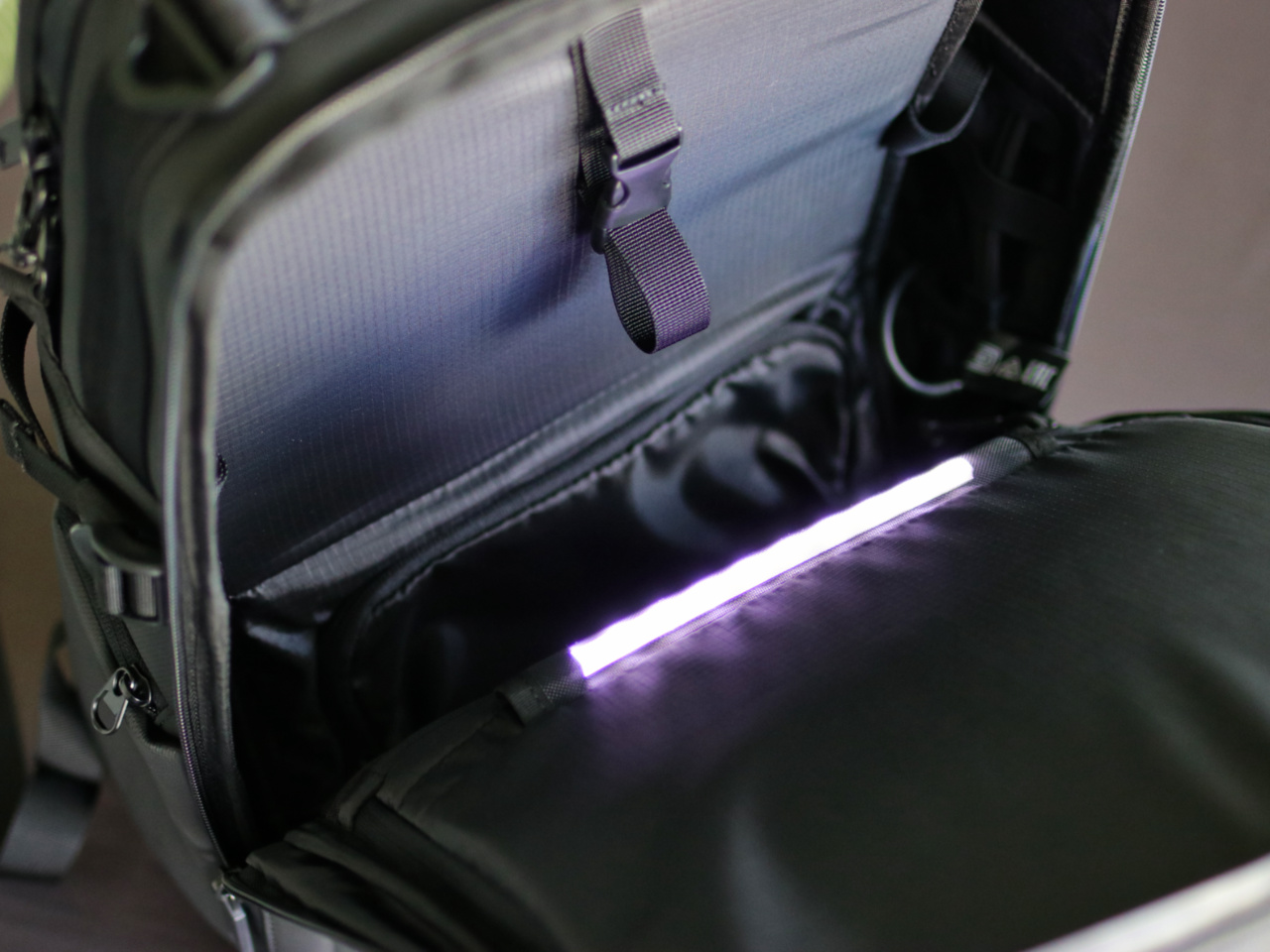 What’s nice about this compartment is that it also has an LED strip. Not RGB though as its purpose is to light the inside of your backpack so you can easily find what you’re looking for. 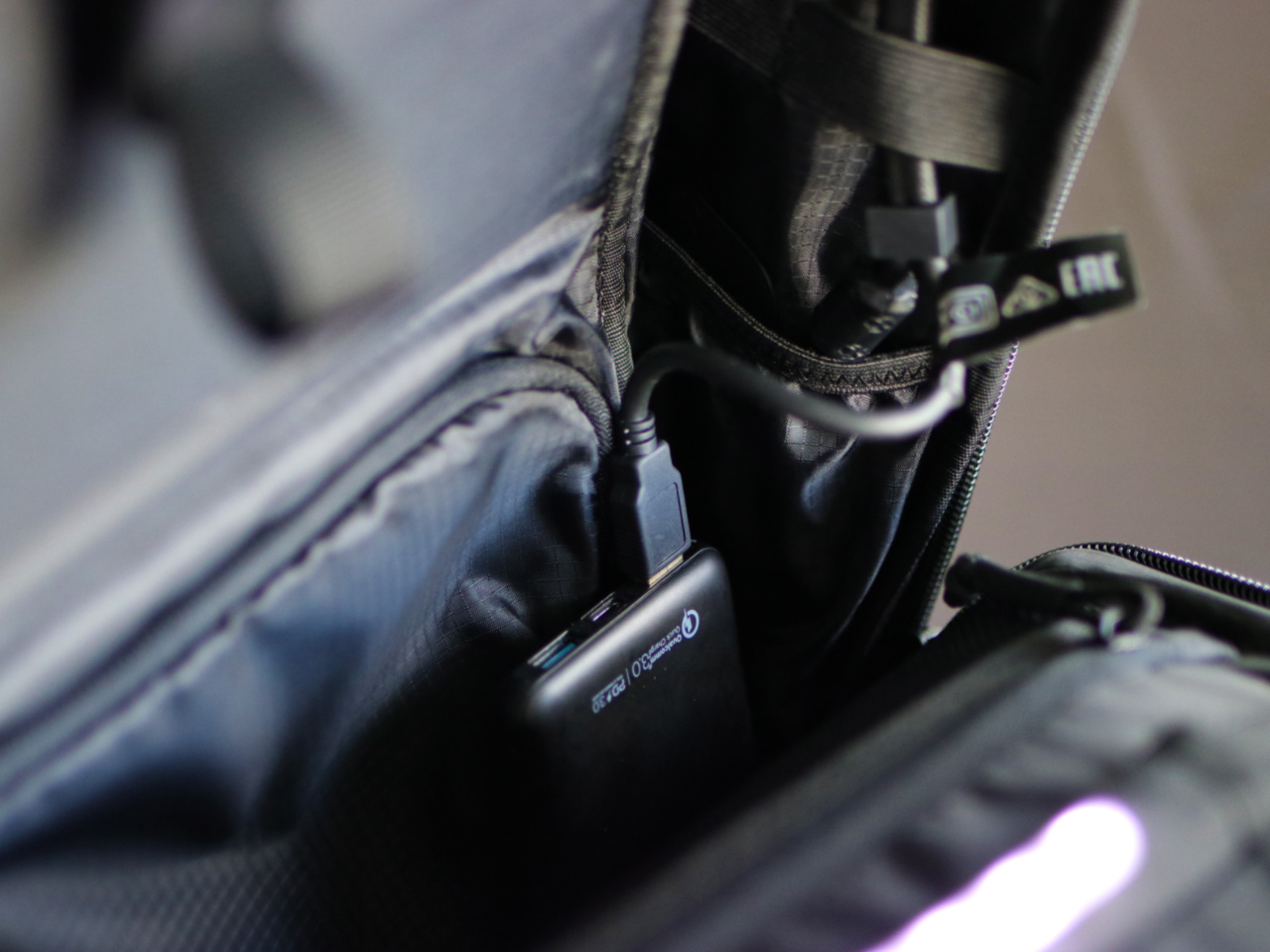 Now, let’s dive into what makes this backpack exciting, the Aura RGB effects. It starts in the power bank compartment inside the backpack. Yes, you will need to provide your own power bank to power the LEDs. There’s a cable that extends to the outside to the LED controller. Just plug it into the power bank and you’re good to go. 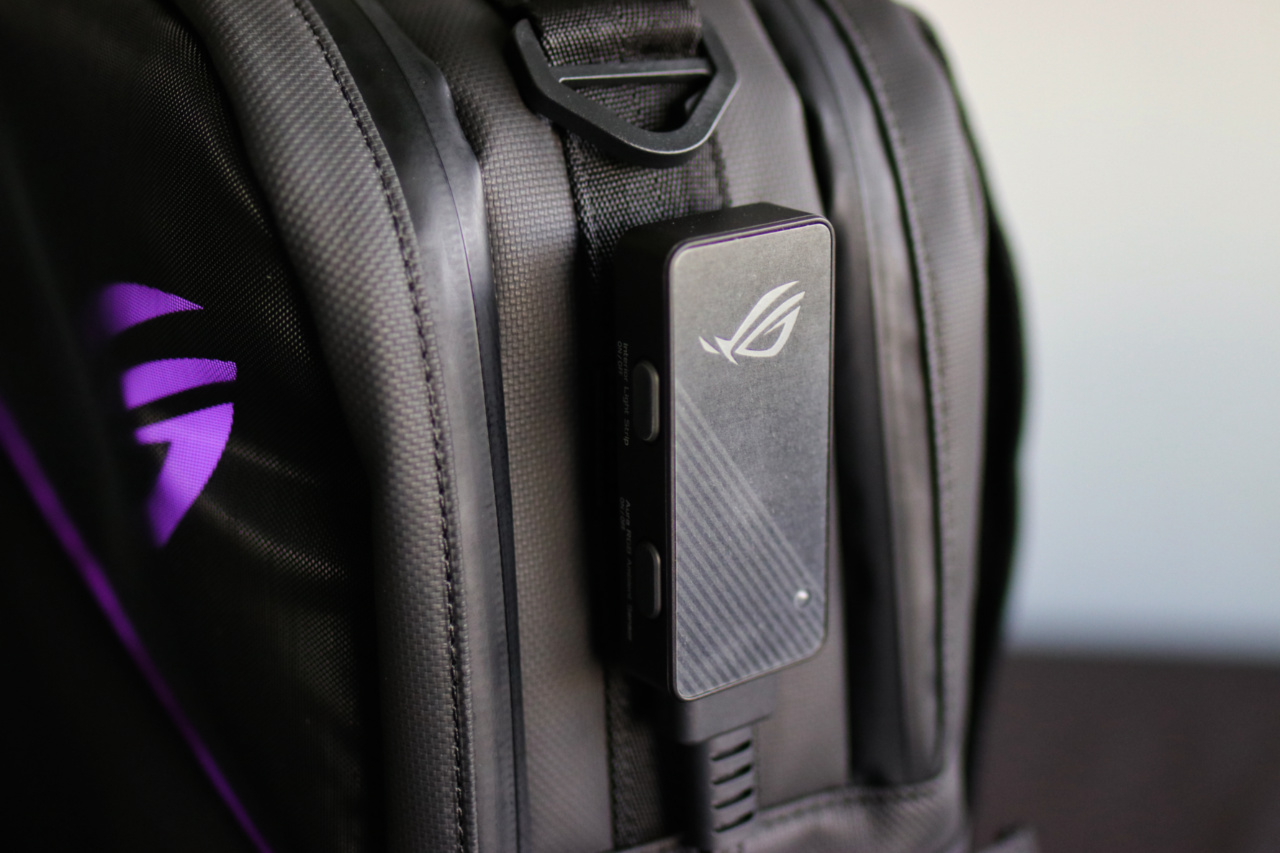 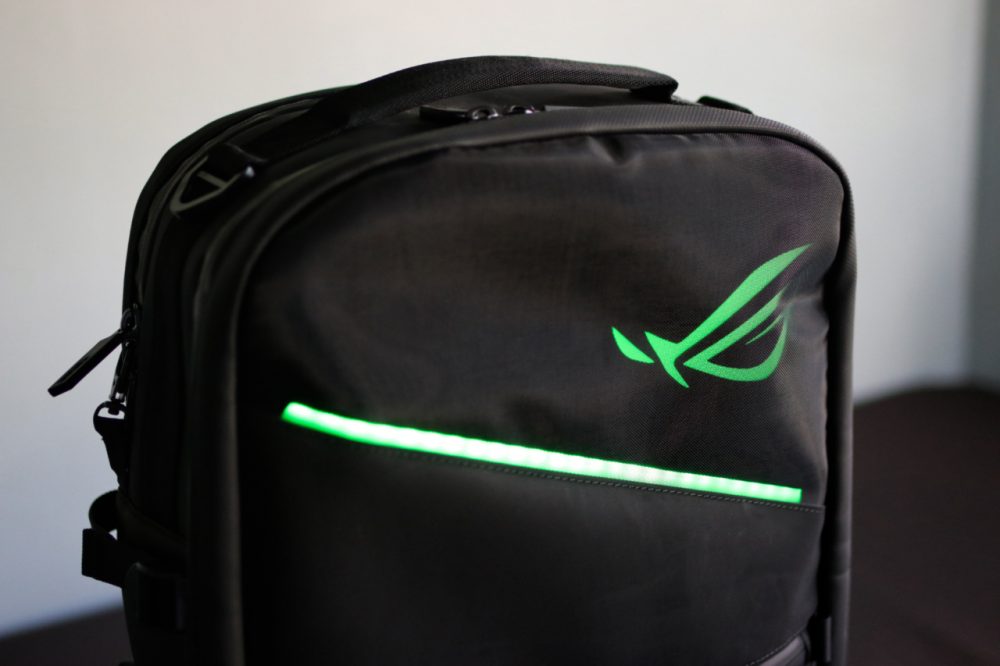 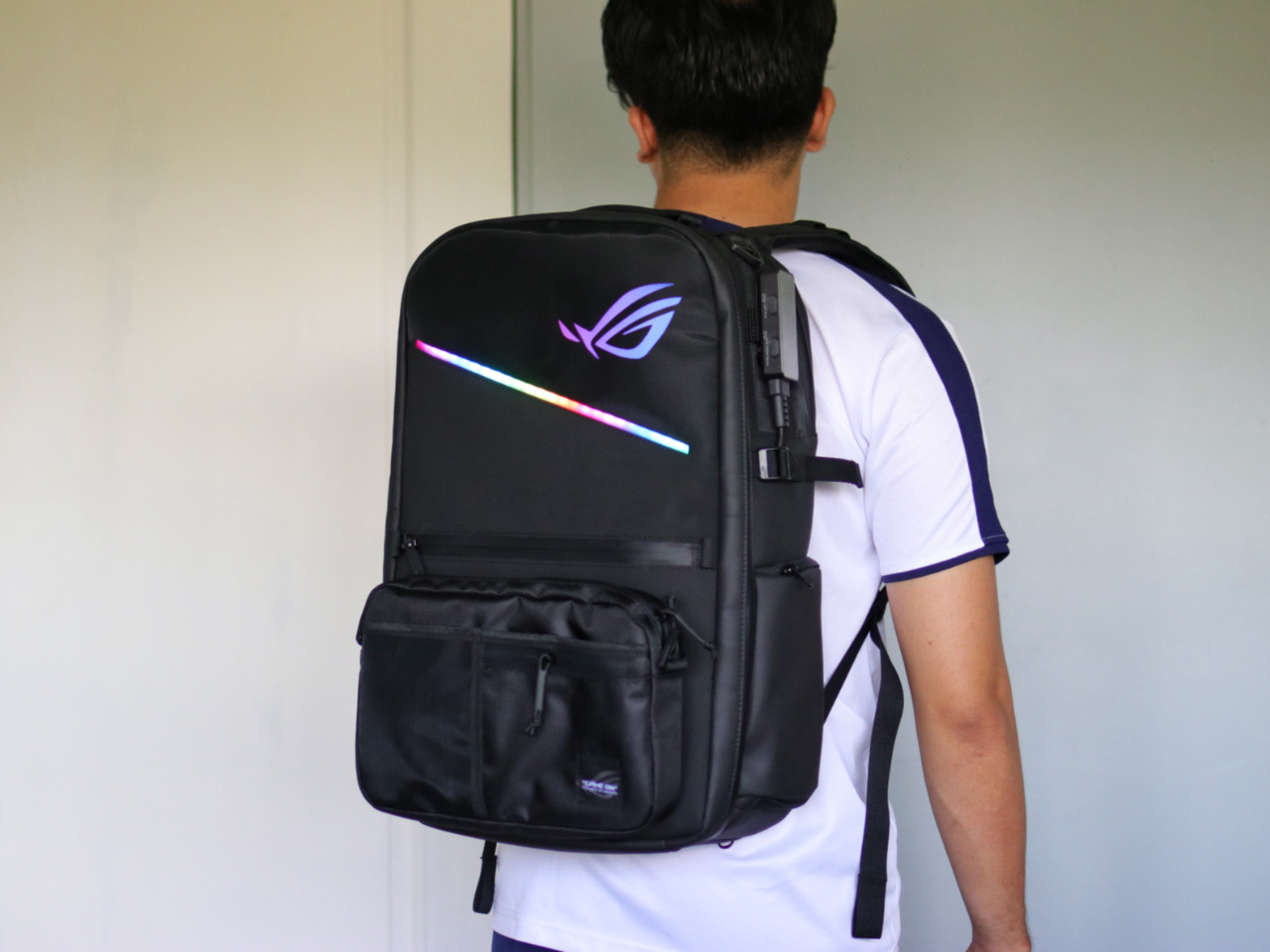 The Aura RGB Ambient Sensor, on the other hand, automatically adjusts the brightness of the LEDs based on ambient conditions. The brightness is set at maximum in low-light and dims in bright conditions. 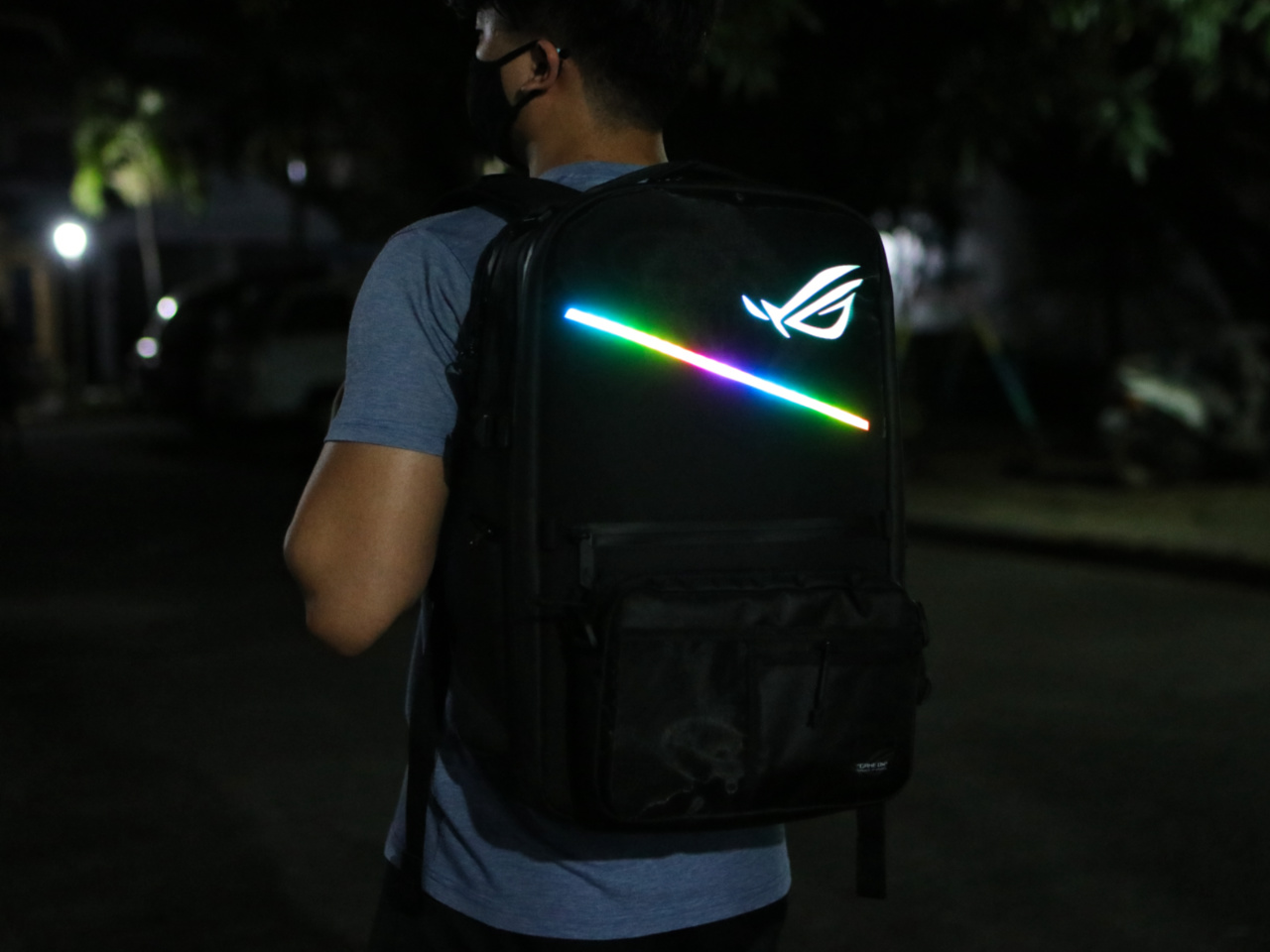 As expected, the RGB effects make the backpack more enticing to look at and will certainly grab attention. If you’re indoors, its function is mostly for aesthetics. If you want more RGB in your gaming room, just turn on the lighting and hang it on a wall. The feature becomes more practical if you ride a bike or a motorcycle, as the RGB lighting will add extra visibility at night for a safer ride.

What if I don’t want RGB?

That’s fine as RGB lighting on a backpack is not everyone’s cup of tea, and that’s why ROG is also offering the ROG Ranger BP3703 Core. Instead of a light-up ROG logo, you’ll get a reflective one instead. 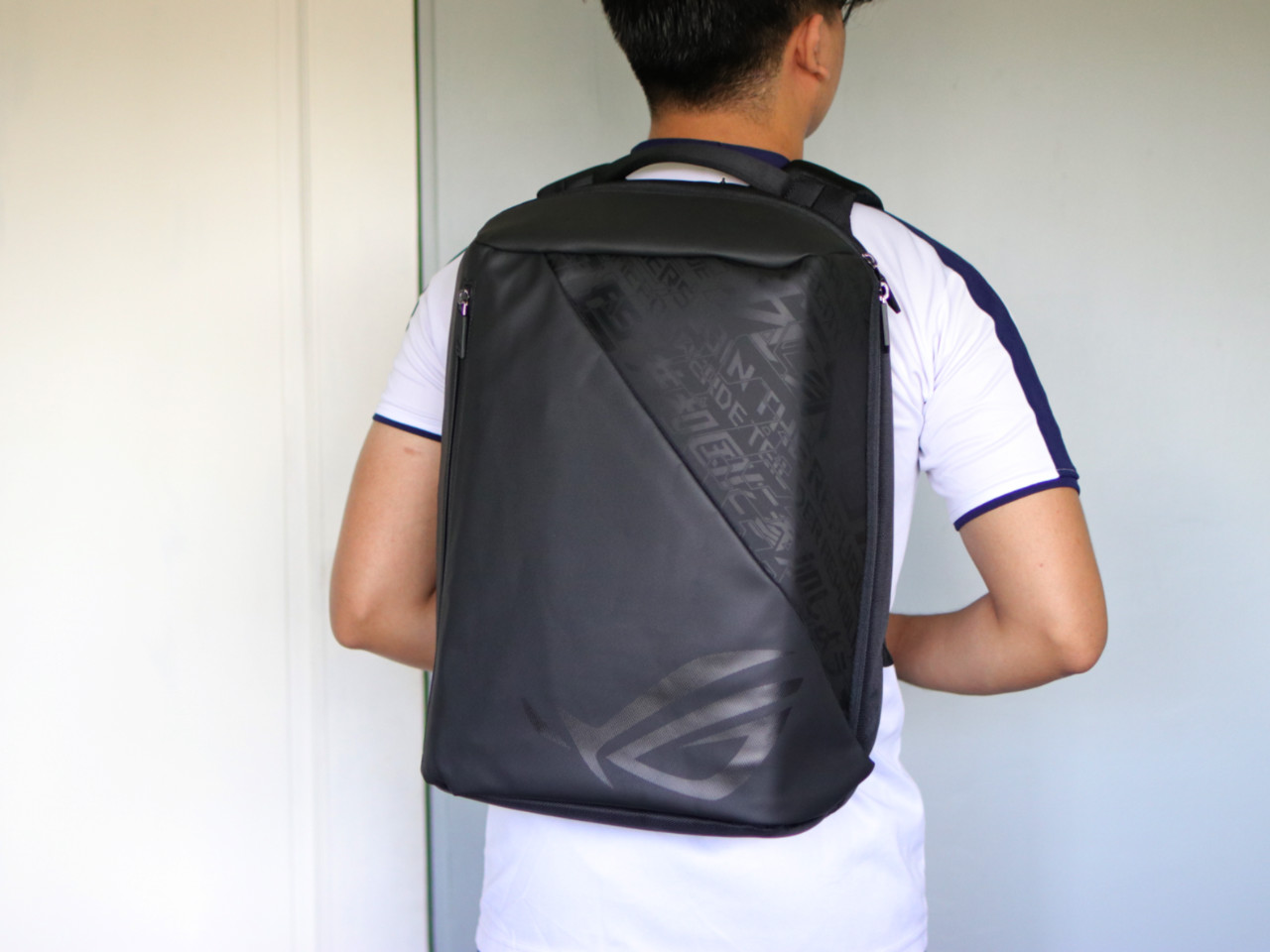 Another alternative is the ROG Ranger BP2500. It may not have RGB but it’s got a stylish slash design with its triangular flap cover secured by the German-made Fidlock SNAP mechanical fastener, and futuristic cyber-text patterns. Its material is made from 1680D polyester, so it’s durable and water-resistant as well. It’s got two exterior compartments with water-repellent zippers, and a hidden back compartment for quick access to smaller stuff like your wallet or charging cable connected to a power bank. It features breathable mesh paddings for the back and shoulders, side-mounted collars, an adjustable chest strap, and a built-in luggage strap. 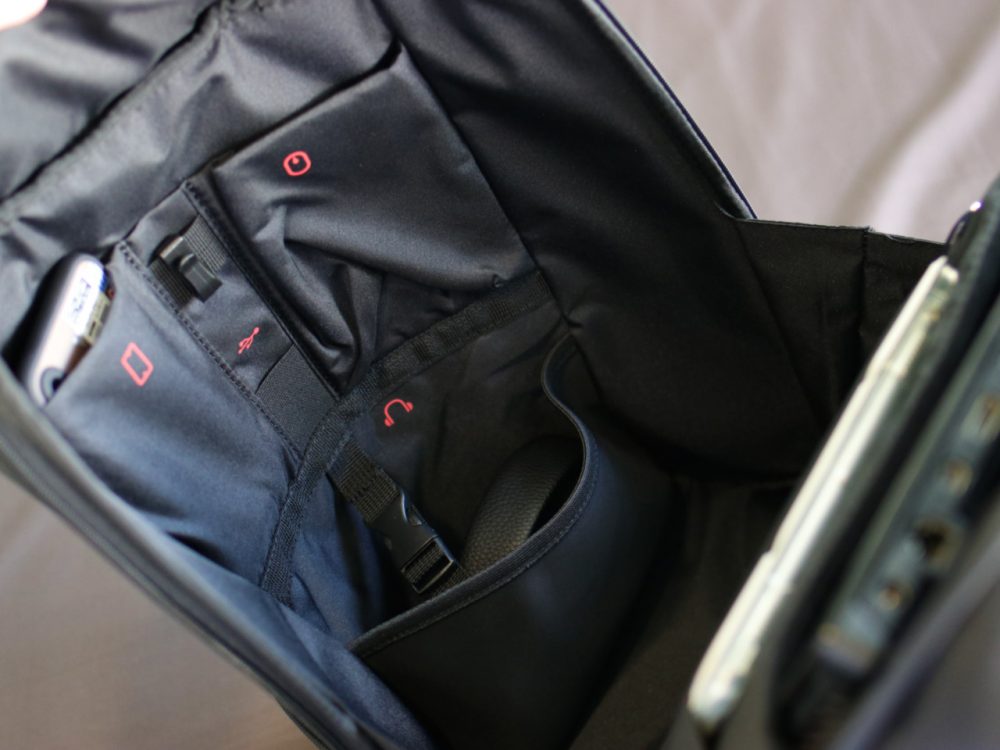 Inside, we got dedicated compartments for up to 17-inch laptops, a tablet, smartphone, mouse, headphones, cables, power bank, and pens. The bottom is spacious and can accommodate even the largest power bricks out there.

The ROG Ranger BP3703 Gaming Backpack is priced at PHP 14,995. It’s expensive, so it’s for a niche market already spending serious money on gaming laptops and those who are looking for the best gear to haul their expensive devices. And of course, those who want more RGB in their life. But for those with simpler needs can go with the ROG Ranger BP2500 Gaming Backpack for PHP 4,995. It doesn’t have the bells and whistles of the BP3703, but it gets the job done.