Every end of the year since 3 years ago, we’d mount a huge giveaway to our readers here in YugaTech as well are our Twitter followers and Facebook Fans. This year is no exception and we’re giving away more than 30 gadgets and accessories.

So here you go — our 2012 YugaTech Great Gadget Giveaway! 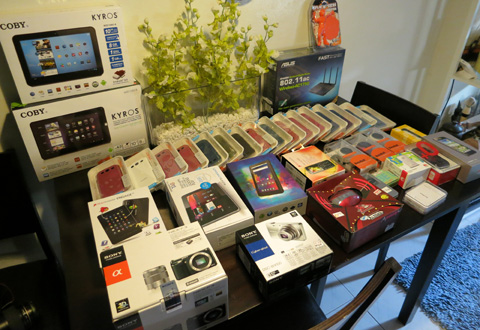 We will have major prizes and then minor prizes. Here’s what we will do — starting tonight until the eve of New Year, we will be posting partial mechanics in order for you to earn entries. Some will be easy while other will require a little creativity or effort from you.

So each day, we’ll put up tasks and how many points you can earn and what you can win. Be sure to come back and check each day for additional points.

In the comments section below, please leave a comment and tell us which of our major prizes you’d want to win. Only one prize per commenter.

Day 2, December 23: It’s the season to be Geeky. Check out our podcast on iTunes under Geeky Nights.

Day 3, December 24: All we want for Christmas is a Sony. Show us your favorite Sony devices in the house. I’m sure you got lots of them since you were still young. Hit the widget below to submit your answers.

Post a tweet if you want one. Just make sure you really need it you have someone to give it to. Be sure to include the #yugatechgveaway hashtag so we can track you.

That’s our first batch of winners. We will pick out 20 more winners next week. Go check out the daily task/mechanics for more chances of winning. Congrats and Merry Christmas to all!

Day 5, December 26: Pretty fly for a WiFi. Show us a photo of your current WiFi router and we might just replace it with a blazing fast 1.3Gbps Asus WiFi Router.

Here’s a photo of my old router and I want to replace it with the 1.3Gbps Asus WiFi Router from the #yugatechgiveaway

Here’s more chances to win that Huawei Honor smartphone. Just post a tweet or an FB update with this line:

Day 7, December 28: What’s more fun than under the Sun? Tweet and ask @suncelltweets to pick you and award the Alcatel One Touch T10 tablet.

Just make sure to include the #yugatechgiveaway hashtag. The ones that get re-tweeted by @suncelltweets will get way better chances of winning the tablet. If you’re the only one who gets re-tweeted, then lucky you!

Day 8, December 29: There’s no HDD like WD. Check out the mechanics below on how you can win this WD My Net N900 Central with 2TB HDD.

Check out our feature about this device here.

Day 9, December 30: Christmas may be over, but the gift giving should not be. Pick a prize for a friend or loved one.

Choose a prize, tweet about it while tagging the recipient like so — “I’d like to gift the Huawei Honor to @abeolandres because he’s cool and geeky! #yugatechgiveaway yugatech.ph/VYfDTi”

You can do the same on Facebook and Google+. Just don’t forget to include the link and hashtag — #yugatechgiveaway yugatech.ph/VYfDTi

Remember, the prize will be given to the person tagged on the winning entry, not the person who submitted it so choose wisely!

Day 10, December 31: Make a wish, list a New Year’s Resolution. Share them here and maybe win them too!

In 2013, I will be try my best to understand how modding works so I can install custom ROM on my phone. #yugatechgiveaway yugatech.ph/VYfDTi

Don’t forget to include the link and hashtag.

Here’s our second batch of winners!

How to claim your prizes!

Please email abeolandre[email protected] with subject “YugaTech Great Gadget Giveaway 2012”. In the body of your email, include your full name, email, address and mobile number, as well as FB/Twitter/G+ if applicable. Also indicate the prize you won.

We will then send details on when and where you can get your prize. Please bring a valid ID (plus a photocopy). If you’re sending a representative, please include an authorization letter.