Audio and sound are the first things that come to mind upon hearing the brand, Marshall. Recently, the Marshall Stanmore II Voice speaker made its way to the Philippines. Here’s our hands-on take of it. 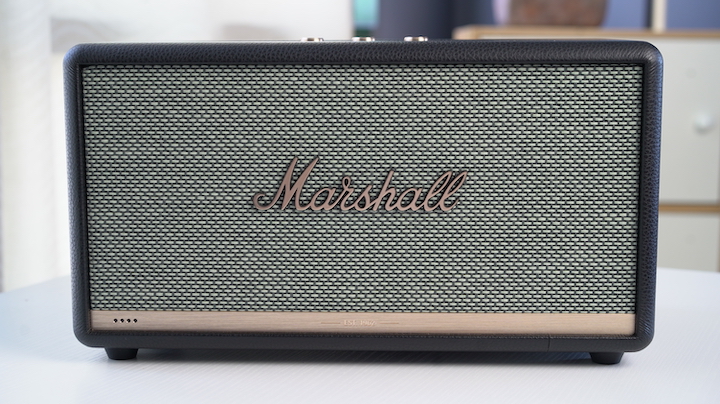 Starting with the design, the Marshall Stanmore II Voice speaker resembles that off guitar amplifiers that Marshall is well-known for. The Stanmore II Voice’s entire body is fashioned with a black leather-like material. It gives the whole speaker a classic, premium, retro look to it. It’s a pretty huge speaker, measuring at 350 x 195 x 185 mm; it’s not something that one can just put wherever. Marshall meant for this speaker to be displayed in its own dedicated shelf space or table. 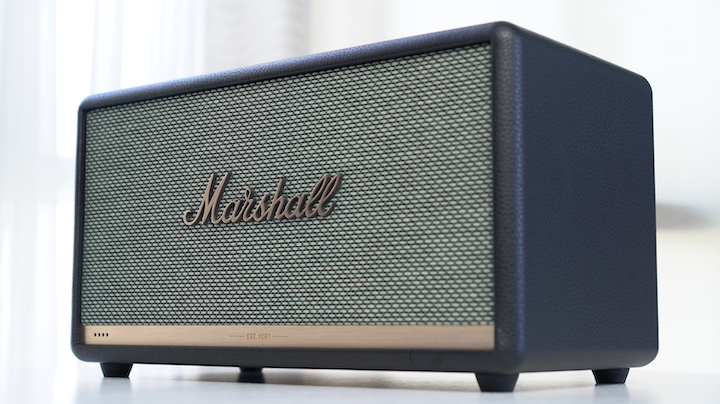 Up front, the speaker has a grey grille, with the gold-plate Marshall logo positioned in the center. There’s also a gold-color bar at the bottom, with five indicator lights located on the left and the words “EST. 1962” emblazoned in the middle. The words serve as a reminder to everyone that the company was first established in 1962. 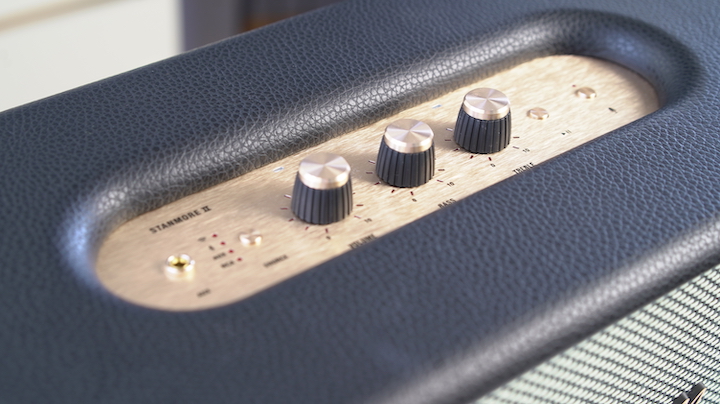 At the top of the speaker sits the controls. There’s an AUX port, and next to that are the source/connectivity options, namely: Wi-Fi, Bluetooth, AUX, and RCA. All four source symbols have indicator lights next to them, and there’s a handy button for users to press and select which source the music will play from. Next, we have these three cool, retro-looking knobs that control volume, bass, and treble, respectively. Surrounding the dials are LED lights that light up whenever you change the level of the volume, bass, and treble. Situated next to the dials are the play/pause button and the microphone activation/mute button.

The control bar and its components also take on a gold theme, similar to the Marshall logo at the front of the speaker. The LED lights, on the other hand, have a red color when the speaker is active. 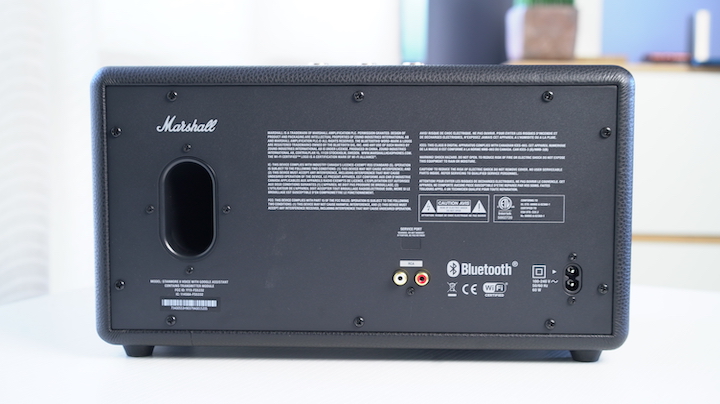 Turning it over on its rear, the speaker loses all that attractiveness of the front and its body. The back panel details labels and legalities, the RCA port, and the connection for the speaker’s power cable. It would have been better if Marshall extended the leather exterior towards the rear as well, and hid all the wordy labels and legalities underneath the speaker. Then again, maybe Marshall assumed that users would be displaying this speaker against a wall and so didn’t have second thoughts on designing the rear.

Overall, I’m incredibly fond of the Stanmore II Voice’s design. It’s classy, stylish, and it appeals to individuals who are into the vintage aesthetic. There’s not much one can do about the speaker’s rear, so it would be most ideal for displaying this against a wall or something that would hide the back. 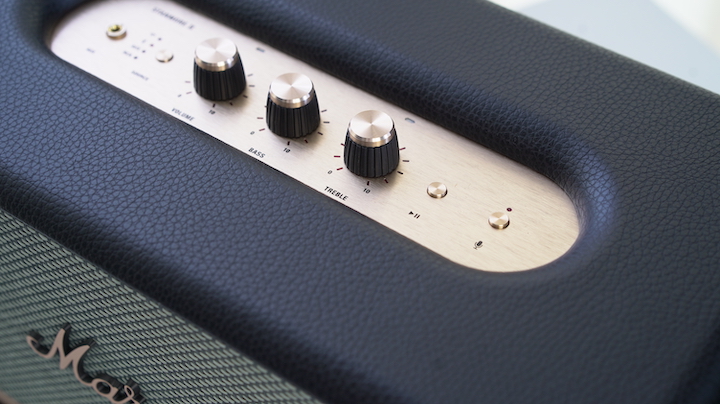 To connect with the speaker and control it via voice command, one can download the Google Home app or the Marshall Voice app. You can use Google Assistant or Amazon’s Alexa, respectively. You can ask either AI to play/pause music, skip tracks, and the like. The Marshall Voice app has more options than Google Home, as it has an equalizer for you to modify the audio to your liking.

If voice control isn’t your thing, you can still connect to the speaker via Wi-Fi with the use of Spotify Connect, Bluetooth, AUX, and RCA. One can also adjust the music by the knob. A significant downside though is that Marshall did not include an AUX cable and an RCA cable in the box. You’d have to acquire those yourself if you don’t want to use the other connectivity options.

Inside, the speaker is equipped with a 50-watt Class D amplifier for the woofer and two 15-watt Class D amplifiers for the tweeters. The speaker’s volume can fill a room, even if it’s only situated midway. If you live in a place with thin walls, you’ll probably end up getting noise complaints not just from the neighbors next door, but also your entire floor or a house or two down the street. Of course, what’s an in-depth hands-on of a speaker without testing out its audio quality? Whenever I’m testing a piece of new audio equipment, my go-to song is Asian Kung-Fu Generation’s ‘Re:Re‘. It starts with an eargasmic thrumming bass rhythm and guitar riffs that build up until vocalist Masafumi Gotoh’s voice kicks in. On the Stanmore II Voice, Re:Re‘s bass is heavenly and addictive, pulsating richly and smoothly.

While it sounded good, of course, I had to test other songs to measure the quality. Next up was another rock-based song, Core Pride by the band UVERWorld. Similar to ‘Re:Re’, your heartbeat pulses along with the bass of the song, and you can’t help but rock out to that electrifying guitars and percussion. I tested out songs in other genres too; hip-hop (such as NCT U’s ‘The 7th Sense’ which should be crowned as royalty due to its deep bass that really slaps), classical/orchestral (Kanno Yoko’s ‘Again’), and ballad (Utada Hikaru’s ‘Dareka no Negai ga Kanaru Koro’), and pop (AKB48’s ‘Koisuru Fortune Cookie’).

Throughout a couple of songs, I’ve concluded that having the volume, bass, and treble at around the middle setting is the most ideal with this speaker. Putting it at high levels of volume, the bass sounds crisp, but all the other instruments and mids of songs come out distorted, especially when it comes to rock-based songs. It’s quite an oddity, seeing that Marshall is a brand associated with guitar amps and a rock image. Still, if you’re not up to using the equalizer in the Marshall Voice app, having the control knobs of the volume, bass, and treble around near equal levels will allow your music to sound balanced. Hip-hop based songs sound heavenly with this speaker, and it’ll get your blood pumping. As for the overall voice sound of singers in songs, they sound clear, crisp, and pleasant. 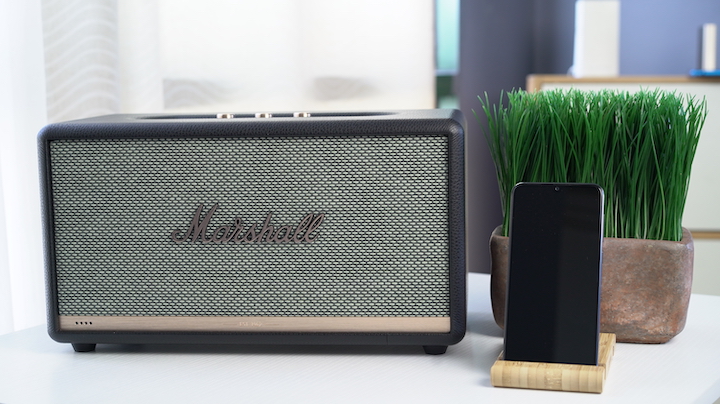 Priced at PHP 26,990, the Marshall Stanmore II Voice isn’t a terrible speaker, but it isn’t a marvelous one either. It looks exquisite with its premium and vintage appearance, has several connectivity options, and the voice control is a great extra feature. It does have several drawbacks though, such as that disappointing back panel, not including an AUX/RCA cable in the box, it only works on electricity, and there’s no battery option, the mids can sound distorted, and let’s face it, the speaker is pretty pricey. If you’re someone who doesn’t mind those things downsides and wants well-designed speakers that’ll even get your neighbors partying, this one might be for you.