Nintendo always aims to be something different from the powerhouse consoles like the Xbox One or the PS4. Like the Nintendo Wii, the Nintendo Switch release was a success. The Switch had the best initial two-day sales of any Nintendo console in North America. It is a great hybrid system that offers gaming in the comfort of your home and on the go.

Right off the bat, the first impression I had on the Switch is the appreciation of its premium build and overall appearance. No matter what color of controllers (called Joy-Cons) you get — either the neon blue + red or all gray — the matte finish of the two color options looks and feels great. 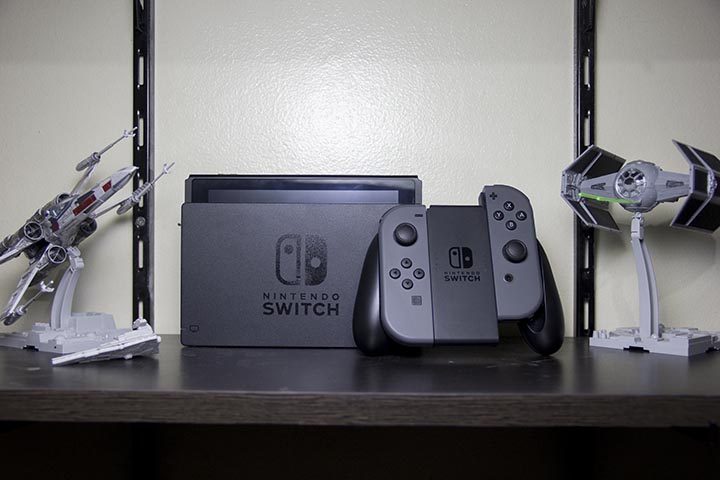 Even the design of the Joy-Cons sliding on and off the console plus attaching them on the Joy-Con Grip to form something resembling a conventional controller feels like a premium product. 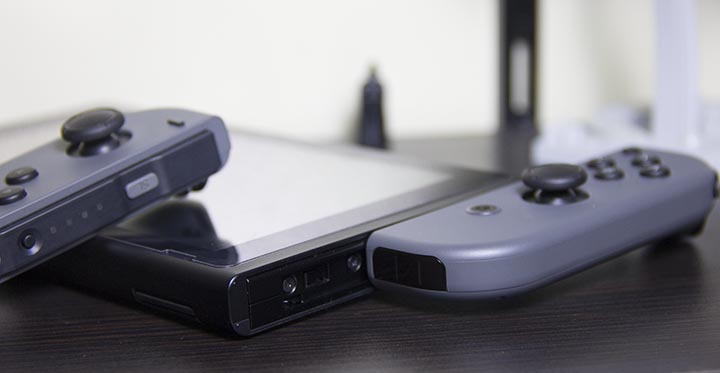 The portable console resembles a small tablet. It has a 6.2-inch LCD touchscreen display with a resolution of 720p, but place it in its dock and it can go up to 1080p (depending on the game). 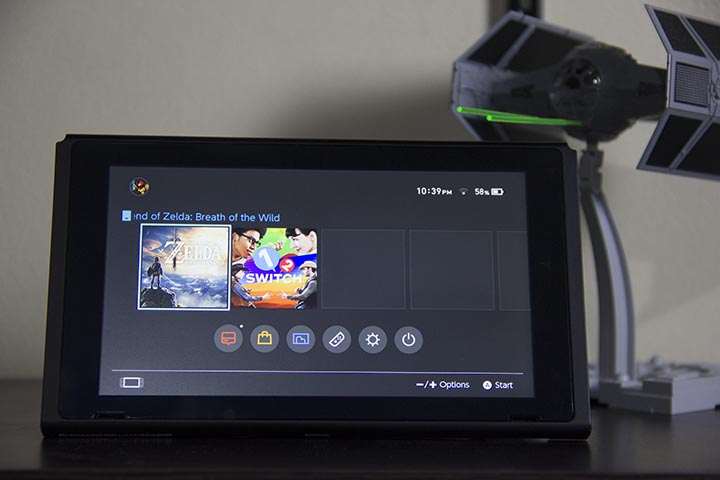 The screen is big enough to see the vibrant colors and shading while I was playing Legend of Zelda: Breath of the Wild. It’s bright enough to be played outdoors with indirect sunlight. I like that Nintendo really made the screen big enough unlike other handheld portable consoles like the PlayStation Vita or Nintendo 3DS that have comparably smaller screens. 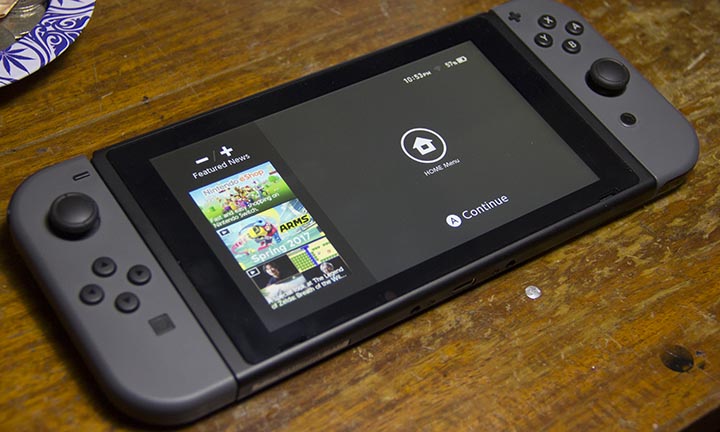 Unfortunately, the memory of the console also resembles a tablet’s as well. It only has 32GB of built-in memory but it has a micro SD card slot at the back of the console to support additional memory. 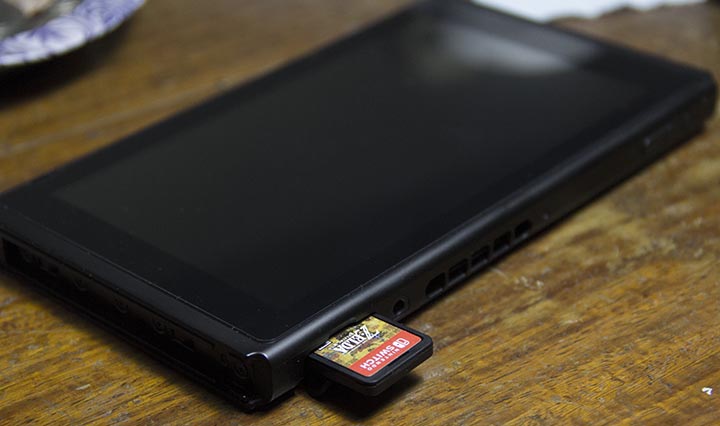 While I enjoyed most of the Switch’s physique, there are also some downsides. The physical buttons are all at the top of the tablet together with the vents and don’t feel natural to reach at times. The SD card slot is also hiding under the stand of the Switch but if you put the console on the stand, the micro SD card is exposed. Also, you wouldn’t be able to use your favorite wireless headphones since the Switch doesn’t support any Bluetooth devices except the Joy-Cons.

Additionally, all your saved files couldn’t be transferred or backed up either. So if something happens to your console, you wouldn’t be able to recover any of your game saved files. 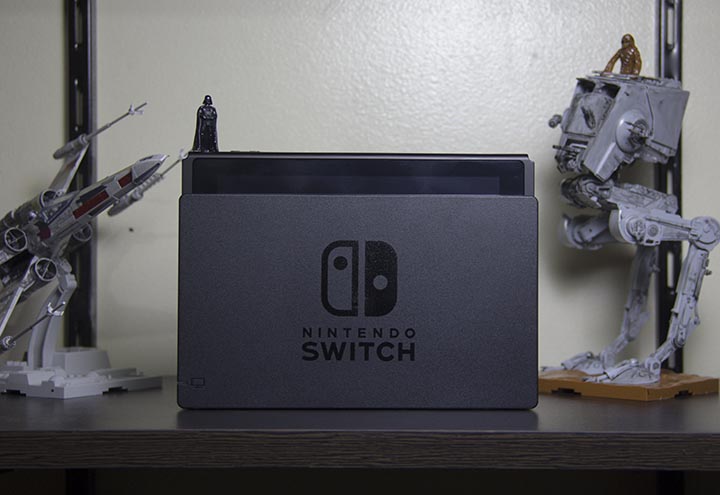 The Dock is essentially a plastic stand where you can dock your Nintendo Switch to charge and also to display the picture onto your TV so you could play like on a normal console. 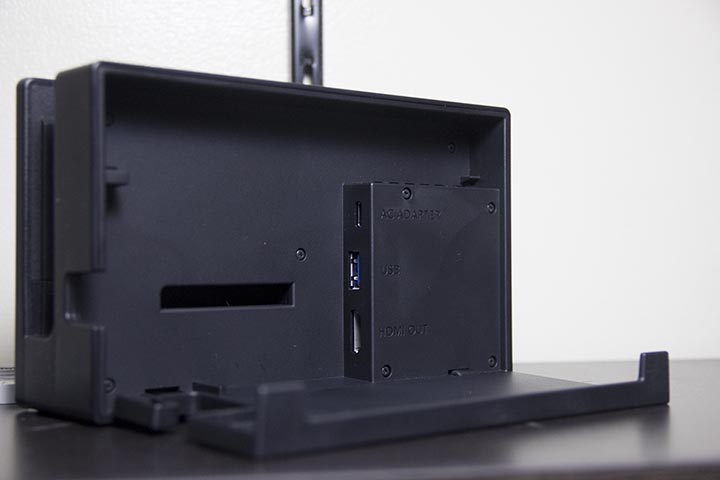 It has HDMI, power outlet, and USB ports. The process is very straightforward and works as advertised. Within a couple of seconds of dropping the tablet onto the dock, the picture transfers right onto the TV. 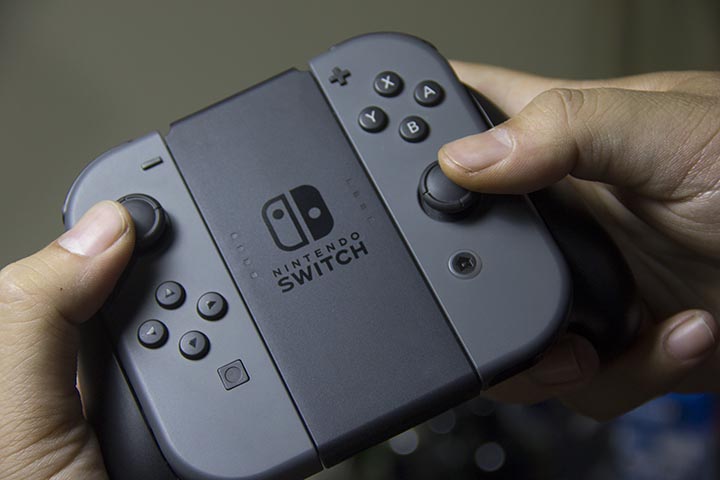 Meanwhile, detaching the Joy-Cons from the console and attaching them to the Joy-Con Grip (seen above) will have you ready to play in no time. The transition back to handheld is just as seamless and is very impressive. 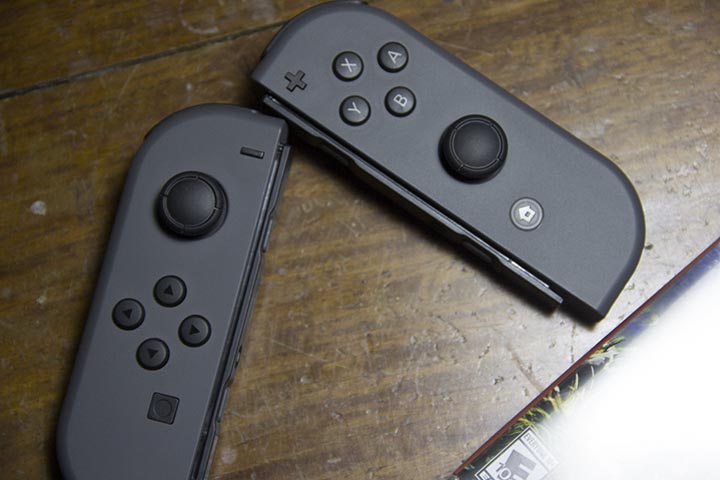 The left and right Joy-Cons resemble the iconic Wii remote from the same company, but better. It has new and useful features including an infrared motion sensor and “HD rumble” that will provide precise feedback to players. It also has sensors which you can use to scan your amiibo. Moreover, the tiny, detachable gamepads can be used by up to two players on their own or slotted into the system’s main controller.

What I don’t like about the Joy-Cons is that some of the buttons are oddly placed. The left and right triggers feel awkward. The analog sticks are a bit short in height that the motion could be limiting unlike PlayStation’s Dualshock 4 or Xbox One controllers.

I have encountered problems with the Joy-Con attached to the Grip as they sometimes disconnect. At times, one side of the Joy-Con shuts down suddenly while the game is still in play. It gets annoying especially if you’re in the moment and trying to defeat a boss. 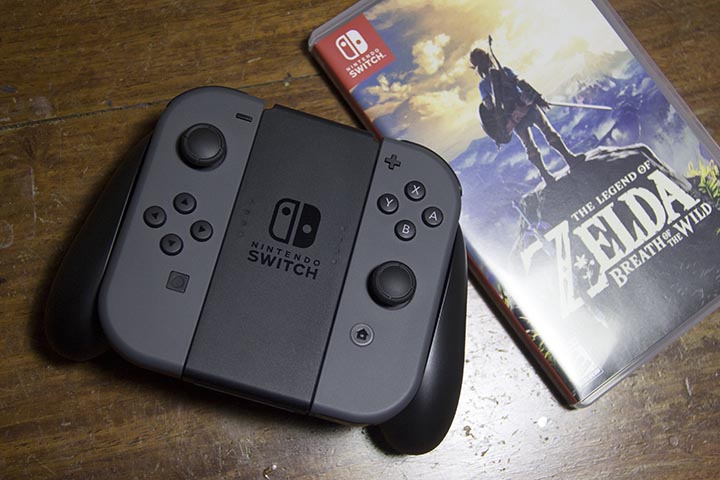 As for the Joy-Con Grip, there is one limitation that I absolutely dislike. When your Joy-Con is attached to the Grip, there is no way of charging the controllers. If you want to charge the Joy-Con, you have to connect it to the Nintendo Switch console to charge. There is an option to buy a Joy-Con Grip with a charger, but you have to shell out extra $30 to buy it. Nintendo should have just included the charging Grip along with the console. Thankfully, Nintendo claims that the Joy-Con has a 20-hour battery life before you need to charge it again.

The time to start up and launch a game is surprisingly short. Even when suspending a game and putting your console to sleep mode, it almost wakes up instantaneously.

When it comes to graphics, the Nintendo Switch console is competent enough to keep the gamer in me playing. The graphics are not as pretty or as realistic as PS4 or Xbox One, but it is good enough on its own way. Playing The Legend of Zelda: Breath of the Wild had its moments when I found myself in awe of its scenery and vibrant colors. 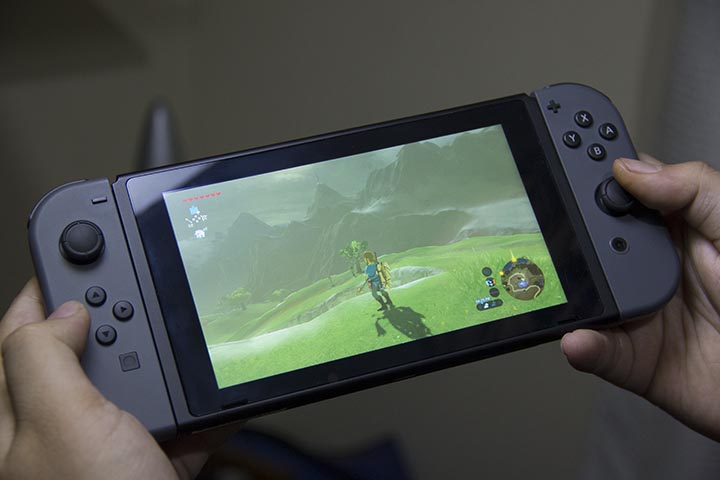 There are some frame rate issues, though. When you play handheld, the frame rate is a decent 30fps and is pretty consistent. Although if I transfer and play on the TV while the Switch is docked, that’s where problems occur. I noticed that there are dropped frames when I move the camera slowly. If there are too many things going on, frame rate drops significantly together with some texture issues. This might be a concern for multi-platform ports that promise to come to the Nintendo Switch like Skyrim, NBA 2K18, and FIFA.

As for battery life, the console itself carries a 4310mAh battery that the company claims can last up to six hours depending on the game you’re playing. 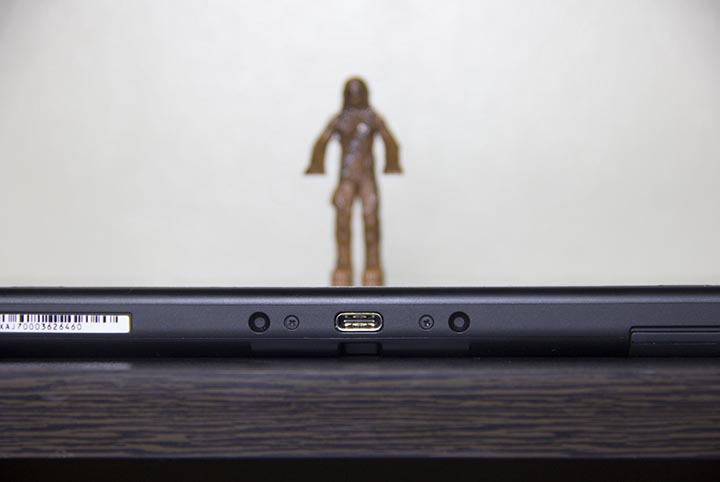 I tried fully charging it and played Legend of Zelda: Breath of the Wild and it took me roughly 3 hours before the battery was left with less than 20% and I had to charge it again through its USB Type-C port.

The Nintendo switch is a powerful hand-held Console compared to its predecessors. It surpasses the PlayStation Vita and Nintendo 3DS in every way. Although as a home console, it lacks the power that the 3-year-old PS4 and Xbox One has. That being said, what I noticed about Nintendo through the years, was that they always competed for the unique designs of their consoles first with the internal specs coming second.

Additionally, the fact that you can play your games either at home or on-the-go is awesome and I really appreciate it as a hardcore gamer. The Nintendo Switch, for me, is an all-around console that has solo games, co-op games, and party games (like the 1-2 Switch) that both casual and serious gamers can enjoy.

The Nintendo Switch is now available in the Philippines through offline stores like Datablitz as well as online via Lazada.