Realme has launched its latest budget smartphone, the Realme C3, in the Philippines. Coming in as the successor to last year’s C2, the C3 comes with a larger screen, triple cameras, a bigger battery, and an Helio G70 chipset. Is it worth an upgrade from the C2? Find out in our review. 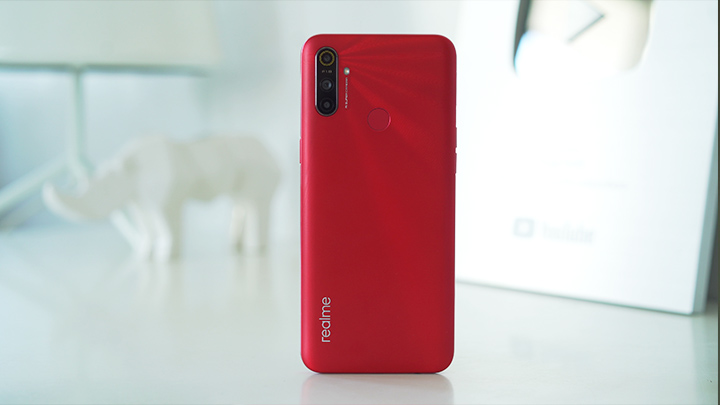 The Realme C3 comes in two colors, namely Blazing Red and Frozen Blue, with our unit here in the former. The striking red color is a sure head-turner; not only that, but the rear also has a wavy, ridged texture to it that gives the device a ray-like pattern when hit by light. As it is a budget smartphone, the C3 has a body constructed with plastic. Despite the material, it feels quite robust in the hands. 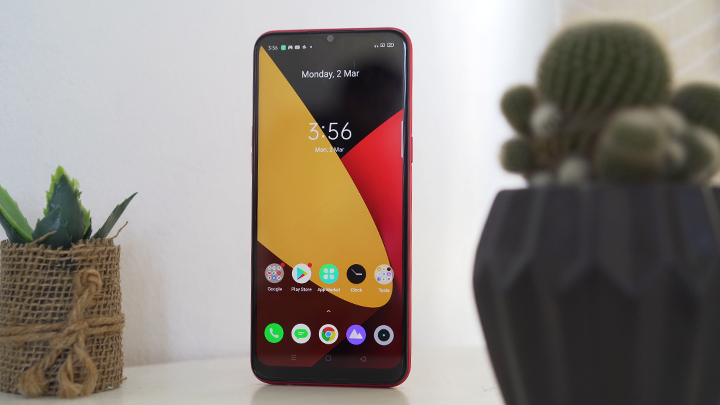 Upfront, the C3 has a sizable display with what Realme calls a “mini drop notch” that houses the front camera. The side bezels are quite slim, measuring around 3 to 4mm, while the chin is somewhat thick and measures at around 8mm. 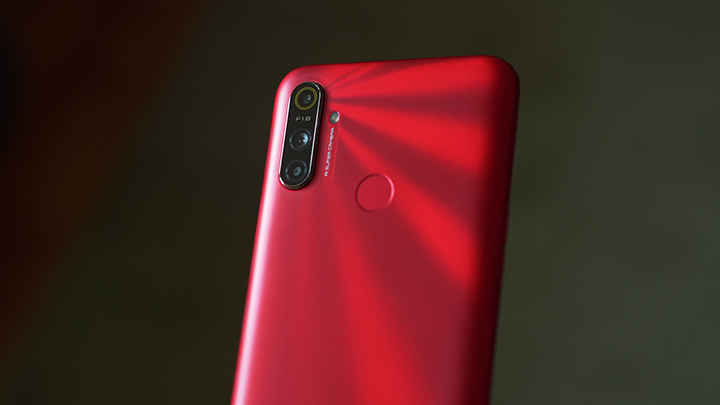 At the rear, situated on the top left corner, is the C3’s camera module, housing triple lenses. The C3 also has a circular fingerprint scanner located at the top center of the device, just a few spaces next to the camera module. 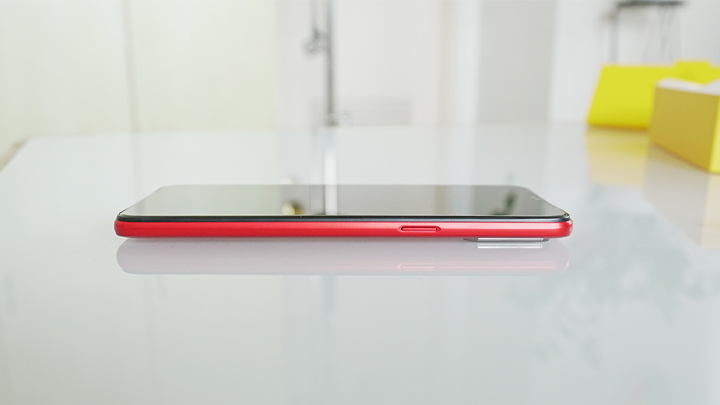 Sitting on the right side of the device is the power button. 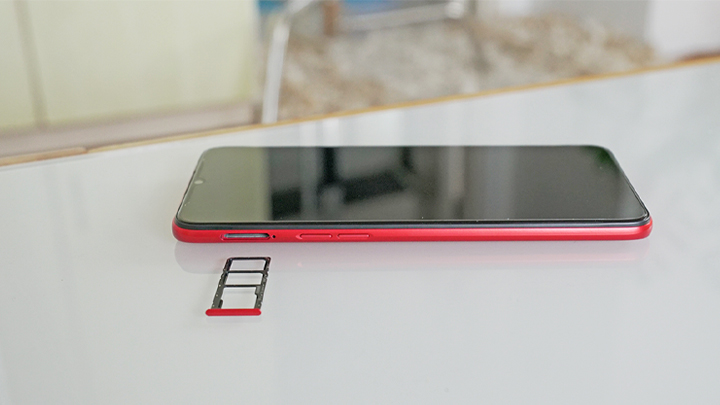 Meanwhile, located on the left is the volume rocker and the dual nano-SIM tray with a dedicated micro SD card slot. People who are familiar with having all the buttons on one side would have to get used to the C3’s buttons on opposite sides. 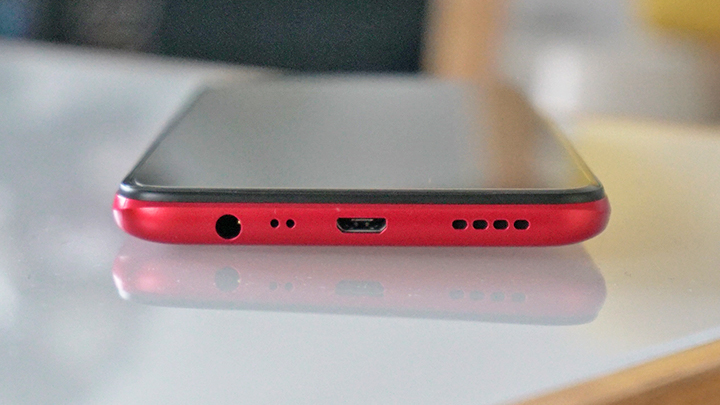 The C3 doesn’t have anything at the top; the 3.5mm audio jack, microphone, and the micro USB port are all located at the bottom of the device instead.

For display, the C3 sports a 6.5-inch screen with an HD+ (720 x 1600) pixel resolution and an aspect ratio of 20:9. Color reproduction is pretty good and quite vibrant. The C3 also has a rather bright panel, as we were able to use it at around 60% under direct sunlight. 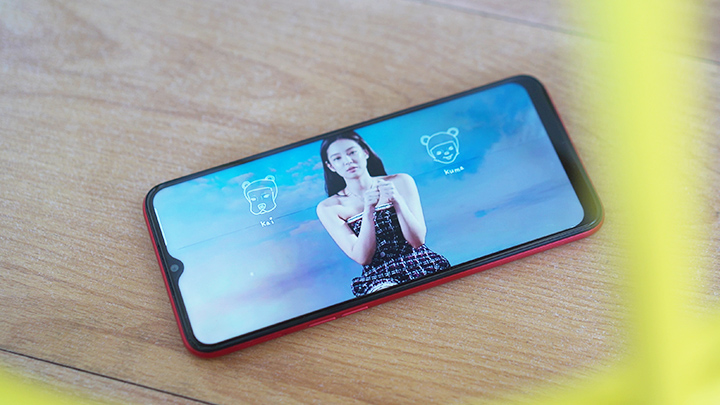 Audio-wise, at maximum volume, the sound is enough to fill the room; however, it comes out slightly distorted and tinny. The lows are also pretty non-existent. We recommend using earphones instead.

Equipped in the C3 are three cameras on the rear and one up front. Lined up vertically on the back are the 12MP main, 2MP portrait, and 2MP macro cameras, while residing in the mini drop notch is a 5MP AI Beauty Selfie front camera. 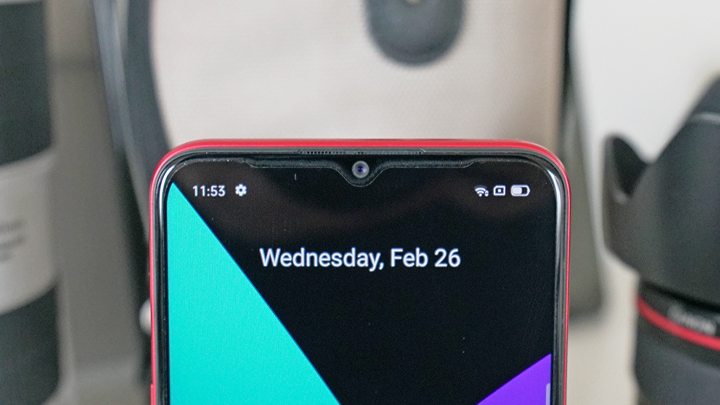 Photos taken by the rear camera look decent under ample lighting; they have the right amount of detail in them, and sharpness is present as well, making them usable in social media posting. The colors appear to be muted, though. In less favorable lighting conditions, the photos produced look blurry and have an amount of noise present in them. Additionally, the C3 doesn’t have a Nightscape feature, and so, shots taken in low-light conditions and nighttime will appear muddy and have a lot of noise.

When it comes to selfies, the 5MP camera produced rather average ones. Some noise is present, and some images look blurry as well. Color reproduction is somewhat inaccurate too. Under the Beauty mode, the skin looks smooth but has a slightly flat touch to them. In portrait mode, subject-background separation is rather terrible as the edges of the subject appear harsh, and even with the option to set the blur level, the subject tends to look flat against the background.

Video-wise, the C3 can shoot up to 1080p at 30fps. Colors appear slightly dark even when shooting in daylight, and some details seem to be muddy. There’s also very little stabilization, so we recommend using a tripod or monopod.

The Realme C3 runs on the Realme UI V1.0, based on ColorOS 7 and Android 10. The brand recently introduced its own user interface, and the C3 is the first device that sports the Realme UI out of the box. It comes with a host of features, and also allows the users to customize several aspects, like the icons in particular. Icons can be customized to a square or rounded shape, set transparency, adjust sizes, or even change the image of the icon. 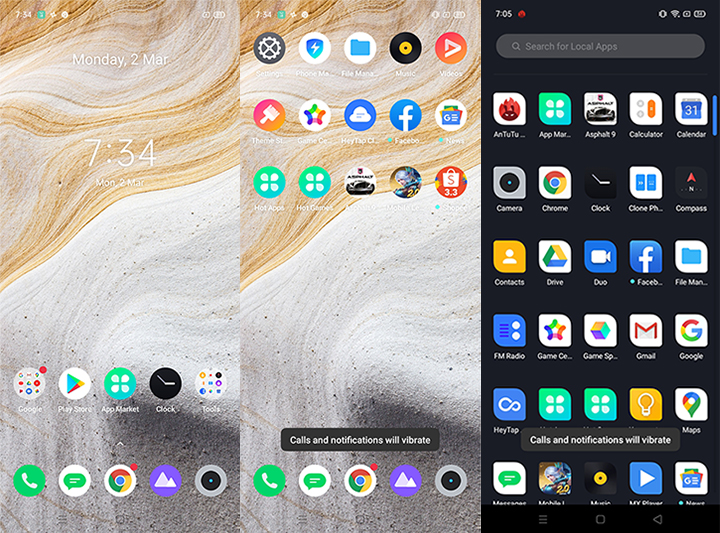 Out of the C3’s 32GB storage, about 24GB of it is ready to use. The C3 does have a dedicated microSD card slot, and users can expand the storage up to 256GB.

Under the hood, the C3 is armed with a MediaTek Helio G70 chipset, paired with a Mali-G52 GPU and 3GB RAM. We ran the device through a couple of benchmarks and yielded the following results: 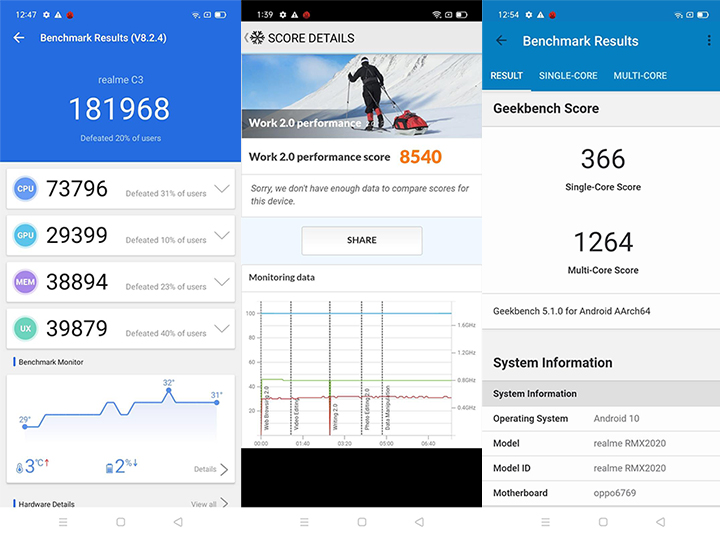 The device has no problem handling basic tasks such as web and social media browsing, emails, news reading, and the like. Do take caution when running multiple apps in the background though, as it may lag. We also tried playing graphics-heavy games, such as Asphalt 9, and there were noticeable frame drops and lags, especially when set at the highest graphics setting.

The C3 has a feature called Game Space that optimizes the devices during gaming. When playing games using Game Space and in the Competitive Mode, the games appeared to run much smoother and had little to no frame drops.

For biometrics, the C3 comes with a rear fingerprint scanner and face unlock. They both work quite well and have a pretty good response time.

The usual connectivity features are present in the Realme C3. It has 4G VoLTE, Wi-Fi, and Bluetooth 5.0. Using location-based apps wasn’t an issue with the C3 either. 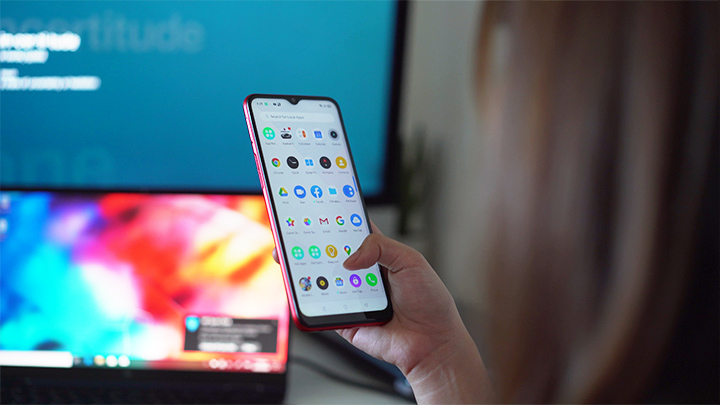 We subjected the C3’s 5,000mAh battery through our video loop test – 50% brightness, 50% volume, airplane mode, earphones plugged in – and the C3 totaled 26 hours and 19 minutes. The C3 also has 10W charging support and has a reverse charging feature. It took us about 2 hours to charge the C3 to a full 100%.

The Realme C3 looks to be a decent upgrade from the C2. It’s got a sizable and bright display, a rather new entry-level gaming chipset, a decent battery life, and a pretty nice interface. Users might be disappointed in the lack of Nightscape and the device’s micro USB port. Still, for a price tag of PHP 5,990, the C3 is an impressively competent smartphone. It’s worth considering whether you’re switching from the C2 or just looking for a dependable entry-level device.