We’ve been seeing the 4.7-inch iPhone 6 compared to other devices in terms of size, but its 5.5-inch counterpart hasn’t been getting much attention lately. In a video made by Tech Smartt, they pitted the iPhone 6 to other phablets in the market today. 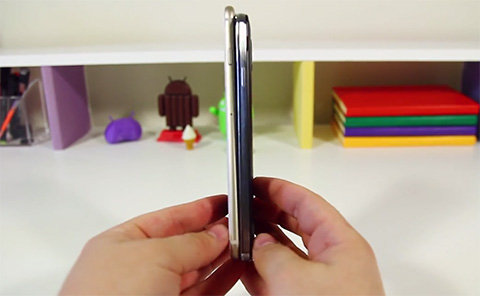 The iPhone 6 shown here are dummy models wherein case manufacturers base their designs so they would have housing and protectors ready once the device becomes official. It’s likely that these are what we’ll be seeing on their release, but there’s still a chance that changes will be made before the launch.

According to the video and as seen on the screenshot above, the 5.5-inch iPhone 6 is thinner and generally larger than the 5.7-inch Samsung Galaxy Note 3. They also placed it side-by-side the 5.5-inch LG G3 and the iPhone 6 still proved to be the bigger phablet. This is mainly because of the bars on top and below the screen which for us, could’ve been used for more screen space.

Though that may be the case, the alleged iPhone 6 has rather thin bezels on the sides which look good in general.

The video also points out how unnatural the 5.5-inch variant is to hold – almost to the point that it would make sense to use a stylus to navigate through it. According to them, the smaller 4.7-inch model is the ideal size for one’s hand to smoothly operate the phone.

You’ve seen the comparisons and if you were to choose between the two variants of the iPhone 6, would you choose the smaller 4.7 inches or the larger 5.5 inches? You can read more of what we know so far on Apple’s next-gen flagship smartphone.