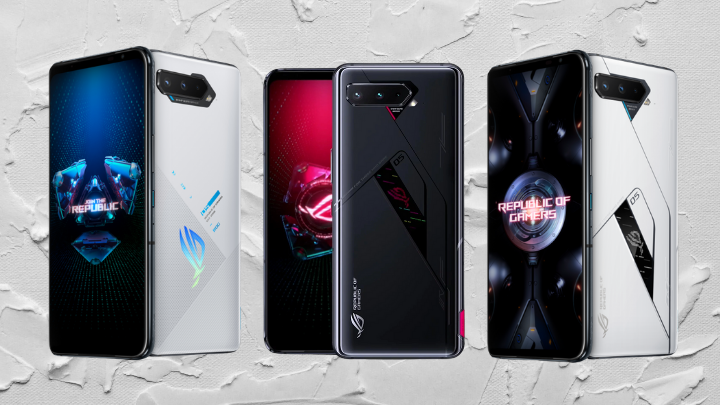 Additionally, the ROG Phone 5 Pro and ROG Phone 5 Ultimate feature hidden rear touch sensors on the back cover, which provide L2/R2 trigger functions, similar to a game console controller. Both also work together with the ultrasonic sensors, the AeroActive Cooler 5 buttons, and the motion controls.

The three are powered by the latest flagship Qualcomm Snapdragon 888 5G processor and Adreno 660 graphics, which has enough power to run the ROG Phone 5’s features and the latest graphics-intensive games smoothly.

What also makes the smartphones different from each other are their RAM and storage configurations. The ASUS ROG Phone 5 is available in three RAM options: 8GB, 12GB, and 16GB, and it has two storage options of either 128GB and 256GB. On the other hand, the ROG Phone 5 Pro comes with 16GB RAM and 512GB storage, while the ROG Phone 5 Ultimate boasts a higher 18GB RAM paired with 512GB storage.

There’s no difference between the three smartphones in terms of cameras. The ROG Phone 5 series sport triple rear cameras, consisting of 64MP Sony IMX686 (main), 13MP (ultra-wide), and 5MP (macro) sensors. Plus, all of them have the same 24MP front camera. For a gaming smartphone, this is a versatile set of cameras, but we’ll know more about its performance once we have reviewed it.

For software, the three runs under the new ROG UI based on Android 11.

Additionally, the three are also equipped with dual front-facing speakers by Dirac technologies and a 7-magnet stereo speaker with a Cirrus Logic amplifier for good audio quality whether you’re playing games, watching videos, or listening to music.

Looking at their capacities, all pack the same 6,000mAh battery with 65W HyperCharge support. It’s a massive battery capacity, which is just right considering the numerous features that will suck up power.

There’s no word yet about the series’ pricing and availability in the Philippines, so stay tuned!

Based on the specs, the standard ROG Phone 5 should be more than enough for any mobile gamer. But those with bigger budgets, need the large RAM and storage capacities and a cooler design, could go for the ROG Phone 5 Pro or ROG Phone Ultimate.

So, which of the ASUS ROG Phone 5 series smartphones would you like to grab? Let us know in the comments below!