The ASUS Zenfone 2 Laser series from last year proved to be an attractive offering for those who are looking for Laser AF-packing smartphone without breaking the bank. They even released three variants – 5.0-inch, 5.5-inch, and a 6.0-inch. For 2016, ASUS took almost everything that made the Zenfone 2 Laser series successful, improved on it, then crammed it inside a single successor – the Zenfone 3 Laser.

The Zenfone 3 Laser’s design is very much different from its predecessor. It is now sleeker and more premium. Gone are the chunky build with a rounded rear and plastic body. Replacing it is a thinner and lighter body at 7.9mm and 150g (vs 10.8mm and 170g of the ZF2 ZE550KL), aluminum chassis, and a 2.5D glass covering the entire front of the device. 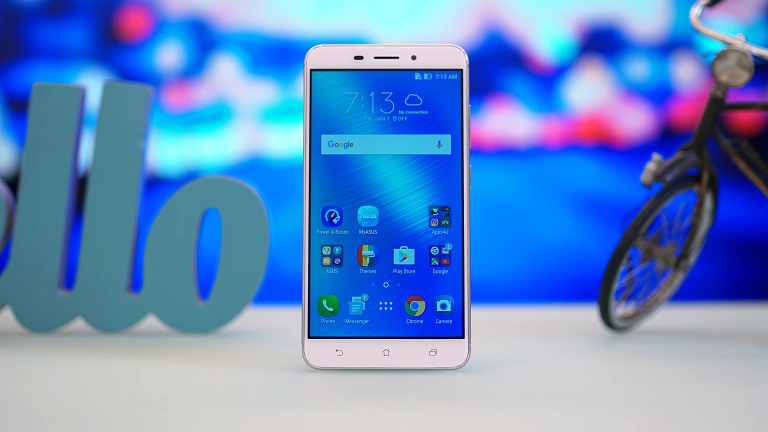 Speaking of the front, we have the 5.5-inch display. Above it are the earpiece, sensors, and the 8MP front camera. Down below are three unlit capacitive buttons for Back, Home, and Recent Apps. 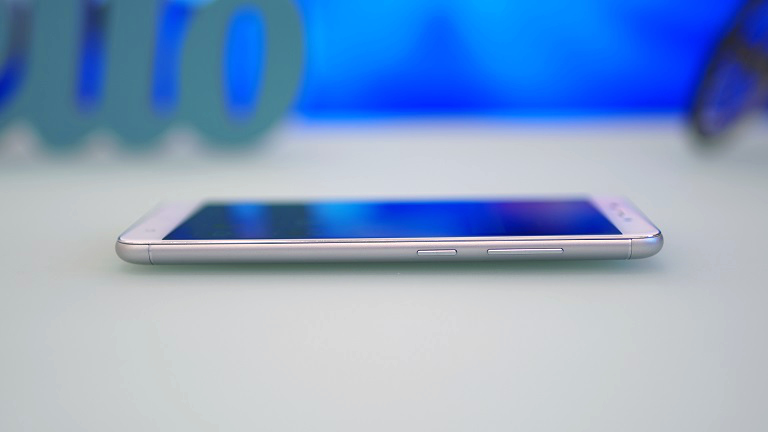 On the left, we have the hybrid SIM card tray while on the right are the metallic volume and power/lock keys with concentric circle texture. 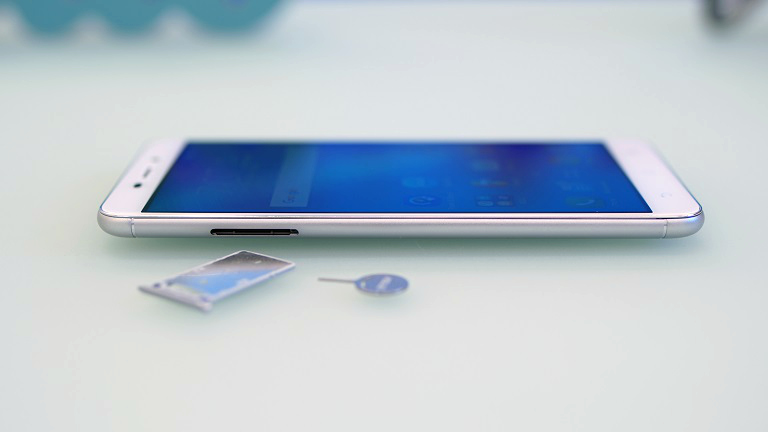 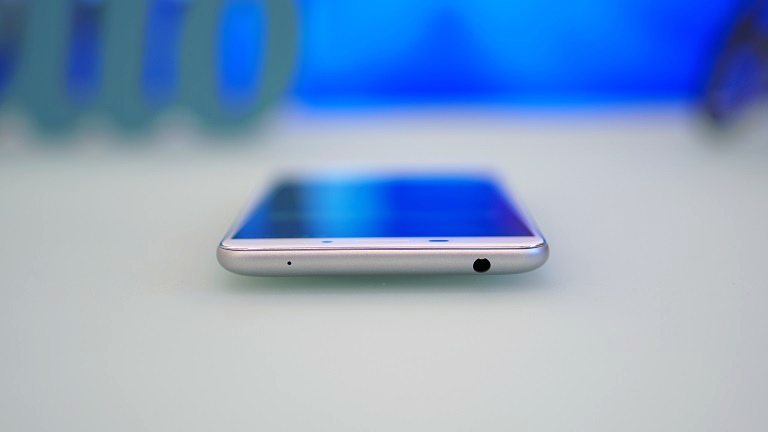 Flip it on its back and you will see the 13MP camera, dual-tone LED flash, Laser AF, and the fingerprint scanner. You can also notice that the back part is segmented, the middle one is all metal while the top and bottom parts are plastic. 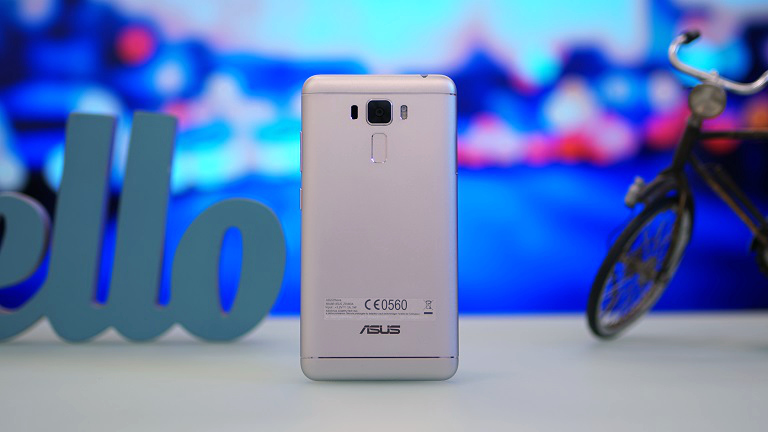 On the hand, the Zenfone 3 Laser is nice to hold thanks to its slimmer and lighter body. The cold aluminum back also feels good on the hands. All in all, it’s more attractive and mature-looking compared to the Zenfone 2 Laser.

The Zenfone 3 Laser now has a 5.5-inch IPS display with a Full HD resolution or equal to 401ppi. If we look back at the Zenfone 2 Laser family, the only model that has that kind of resolution is the 6-inch variant. Protection is handled by Gorilla Glass 3 and not Gorilla Glass 4 like with the 6-inch ZF2 Laser. 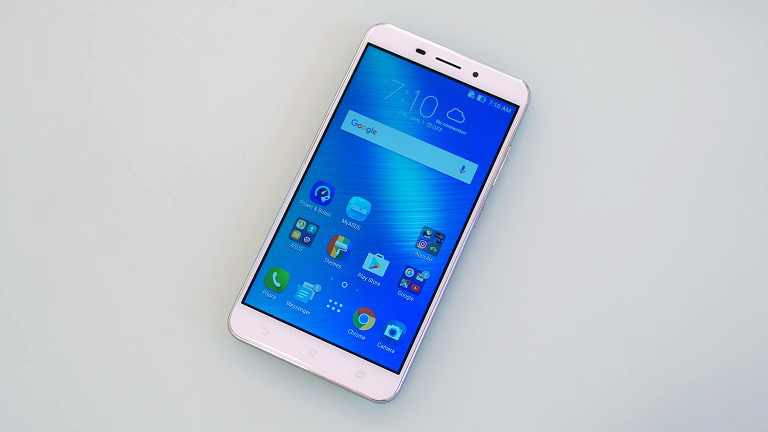 As expected, display quality is good with punchy colors and good viewing angles. It’s also bright enough to be used outdoors during a sunny day. Like with most Zenfones, you tweak the display’s color temperature and select your preferred screen color mode inside settings. 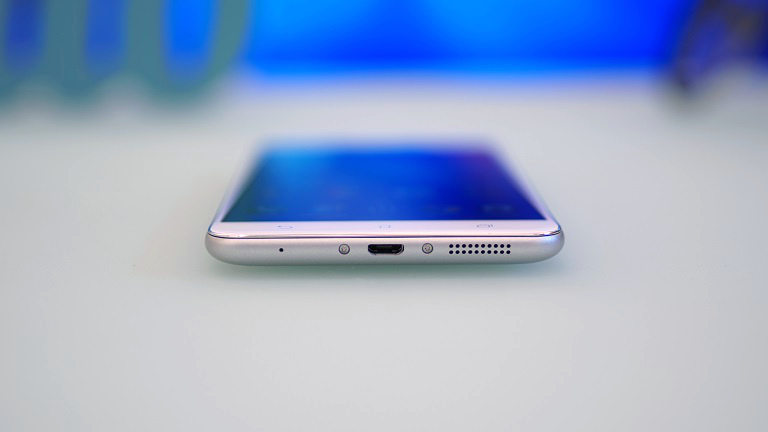 The loudspeakers, on the other hand, are very audible and is good enough for calls, music, and movies. It has good trebles and soft bass but tends to distort at louder volumes. There’s an Audio Wizard on board as well should you wish to tweak audio settings.

The software is handled by Android 6.0 Marshmallow with ZenUI 3.0. It uses an app drawer and squarish icons with rounded corners. Although running fairly new Android system, some of its features (like the App and Widgets tabs) reminds us of older Android versions, but you can easily remedy that with a launcher. 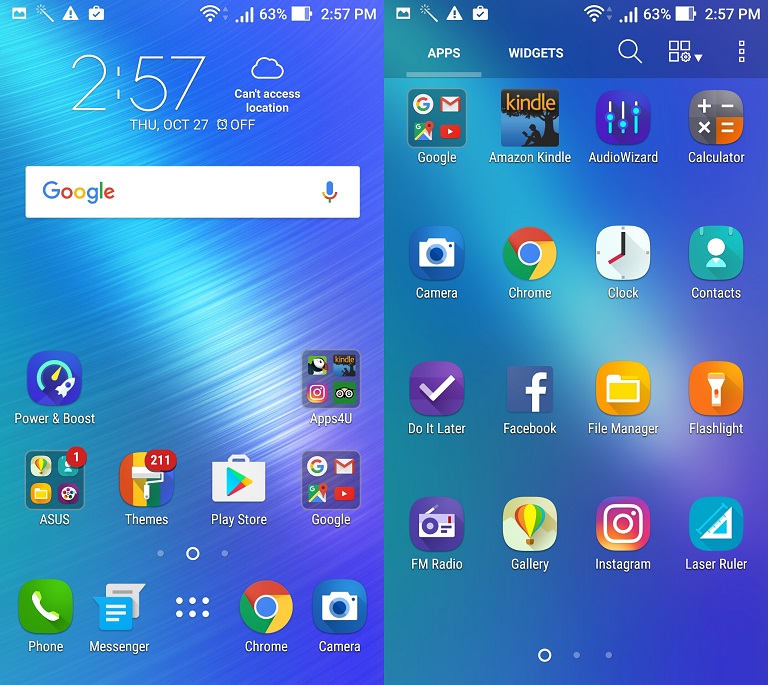 ASUS has been criticized before with their pre-installed apps, but sad to say they haven’t done anything drastic about it yet. Like the rest of the Zenfone 3 family, the ZF3 Laser comes with tons of ASUS apps and third-party apps (Puffin, Amazon Kindle, Instagram, Trip Advisor, Beauty Plus, Facebook, Messenger, Lazada, Need For Speed: No Limits, and Sim City). Not to mention Google’s own apps as well. After setting up the device, you will be bombarded by app updates from the Play Store, and if you have a slow internet connection, it will take a while before all of these apps are updated. 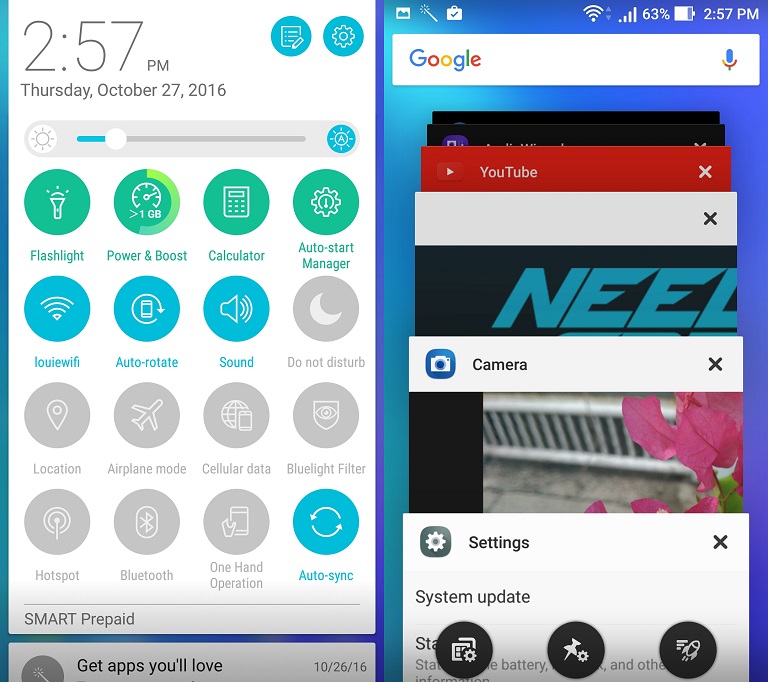 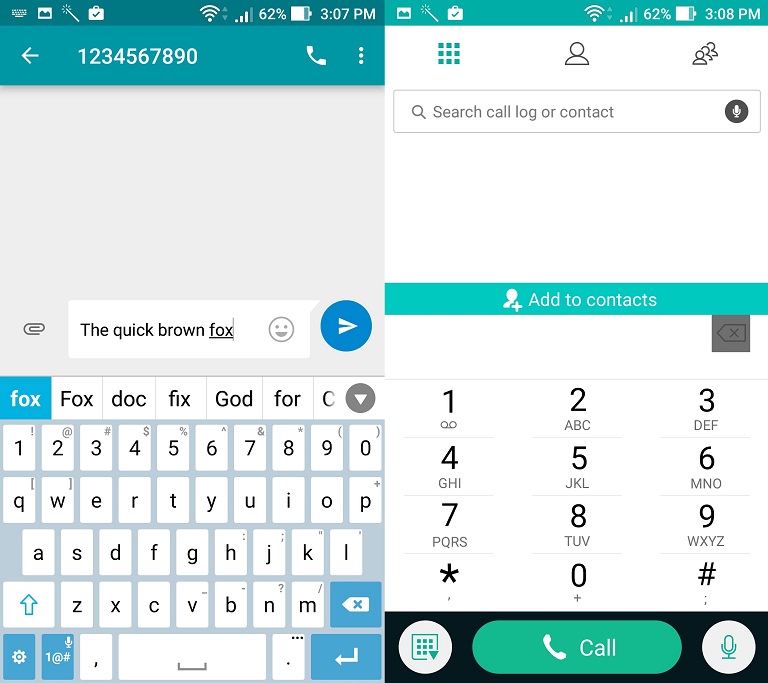 The good news is, you can uninstall those apps that you don’t need which saves precious memory from its 32GB of storage with a usable space of 23.89GB. You can further expand it via microSD card, but at the expense of dual-SIM connectivity.

Imaging is one of the strengths of the Zenfone. At 13MP with Sony IMX214 sensor, it can produce sharp, yet clean photos with good colors. With the help of Laser AF, it can achieve fast focus times so all you have to do is point and shoot. 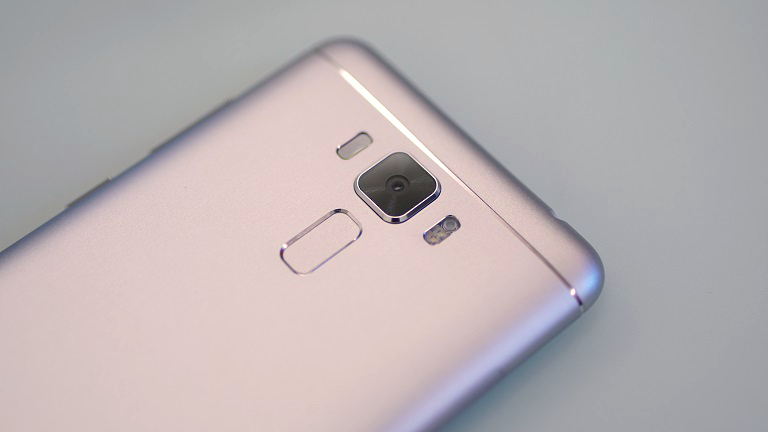 The 8MP selfie camera, on the other hand, has a wide-angle lens for those group selfies and comes with a beautify feature which is a staple in current Zenfones. Check out the samples below.

With videos, the ZF3 Laser maxes out at Full HD at 30fps in MP4 format. Although no 4K, it has 3-axis EIS and 6-direction EIS compensation for stable videos. It works well and was able to keep shaking at the minimum even when we’re casually walking. Watch the sample videos below (watch the second video for the EIS test):

Powering the Zenfone 3 Laser is a modest Qualcomm Snapdragon 430 octa-core CPU clocked 1.4GHz and an Adreno 505 GPU. However, ASUS equipped it with 4GB RAM which is found in most high-end smartphones. That should be enough to handle multiple apps at the same time. True enough, it was able to handle light to heavy tasks with ease, even in gaming as tested with NFS: No Limits. Check out the benchmark scores below: 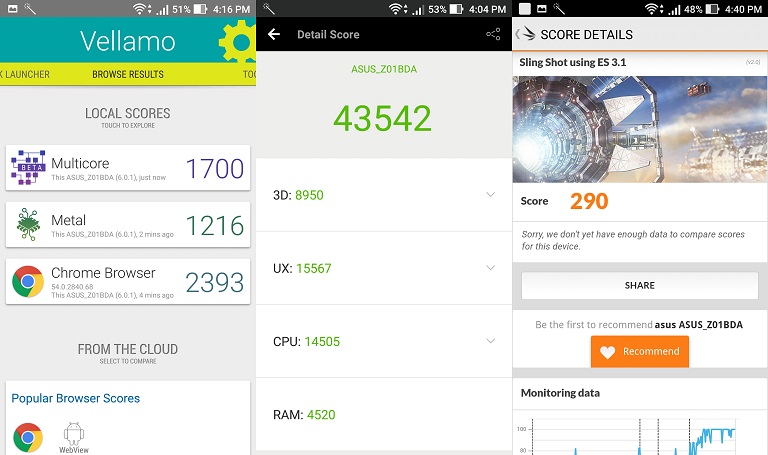 The Zenfone 3 Laser features connectivity functions important to users such as dual-SIM connectivity with 4G LTE, WiFi, Bluetooth, and GPS. However, as mentioned earlier, the SIM tray uses a hybrid setup so if you use a microSD card you will lose the dual-SIM function. We didn’t encounter any issues with mobile data can detect even a weak LTE signal. Calls are loud and clear as well as long as your area has a health coverage.

Providing power for the Zenfone 3 Laser is a 3,000mAh non-removable battery. With light calls and texts, heavy social media on WiFi, with a little bit of gaming can yield 9 to 10 hours of life, which is not bad. 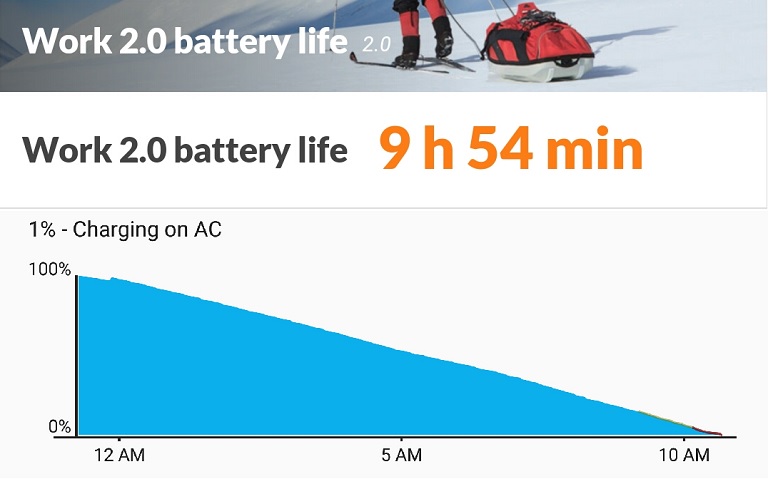 PC Mark’s battery test yields 9 hours and 54 minutes, while our routine video loop test (1080p video on loop in Airplane mode with headset plugged in at 50% brightness and volume) got us 11 hours and 32 minutes which is good.

ASUS did a good job in making the Zenfone 3 Laser. It’s a worthy successor to the Zenfone 2 Laser thanks to the improved and more premium design, upgraded internals, and good pricing. At Php11,995, it’s not heavy in the pockets and in fact, it’s the most affordable 4GB RAM smartphone in the Zenfone 3 family. So if you’re one of those who is looking for a smartphone with said strengths, the Zenfone 3 Laser should be on your list. 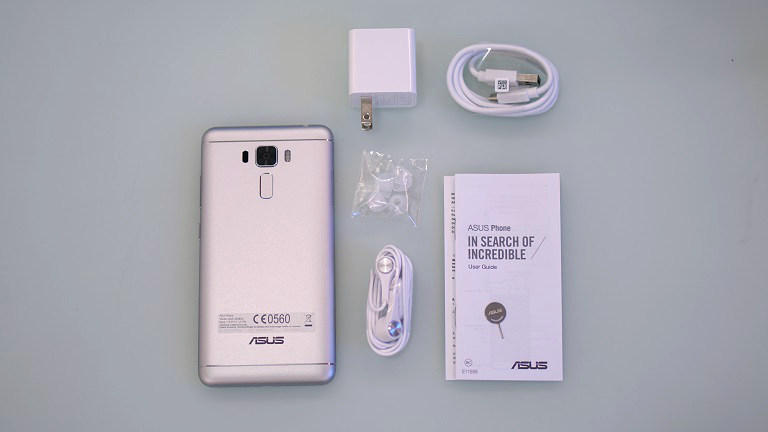