Premium build and attractive design at a low price – that is what Elephone is boasting with their most affordable offering here in the Philippines – the Elephone S1. At approximately Php4K, are good looks partnered with entry-level specs good enough to entice buyers? Find out in our review below.

As mentioned, the Elephone S1 packs a premium build and attractive design for a smartphone of its class. Right away you will notice its similarities with the iPhone 4 with its chamfered metal frame and glass front and back. The slightly curved frame also hints at the iPhone 6’s design. 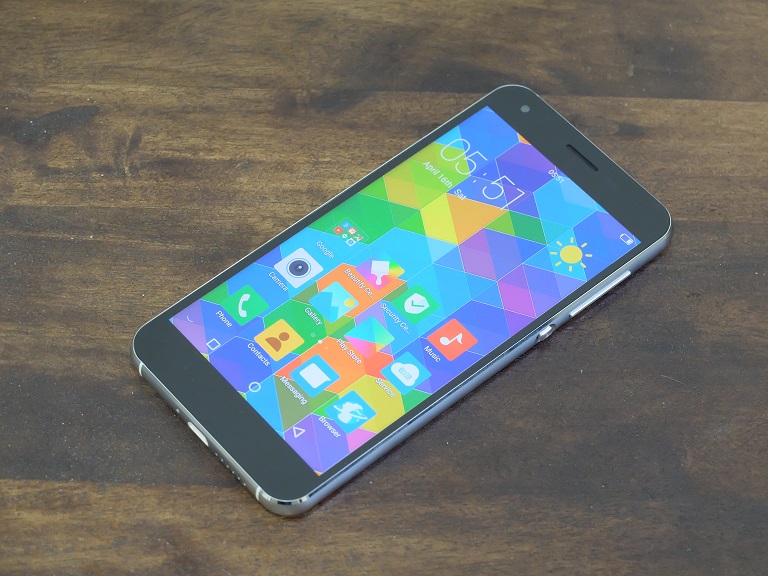 Up front, we have the 5-inch display along with the 2MP camera on the upper left and earpiece right at the center. Capacitive keys are absent down below as the navigation buttons are all on-screen. On the left is the removable tray for the micro and nano SIM cards. As for the microSD, it can be placed in the nano SIM slot which means you will lose dual-SIM functionality if you opt for expandable storage. On the right, we have the volume and power/lock keys. These buttons have a metal build as well and feel firm and sturdy. 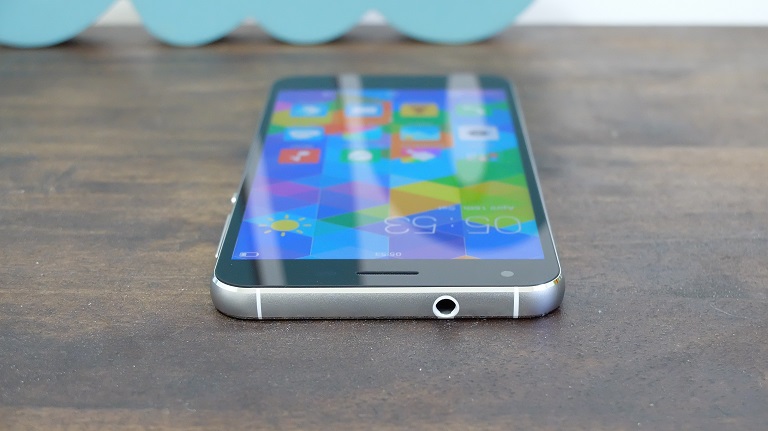 Flip it on its back and you will see the 13MP Sony-made camera with LED flash, fingerprint scanner, and Elephone logo. 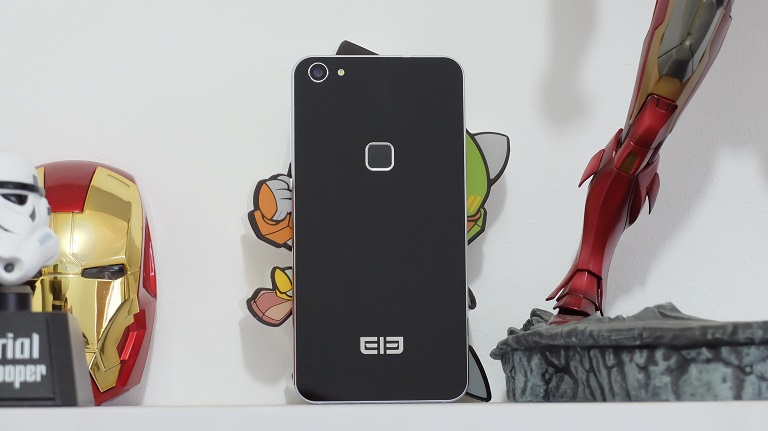 On hand, the S1 feels well-made. The metal frame and glass front and back give heft to the device, but it doesn’t fall short in providing it with a premium feel and attractive looks. To summarize, the S1 has a body of a phone two or three times its asking price.

The S1 is equipped with a 5-inch screen size with HD resolution which gives it a decent pixel density of 294ppi. It also has an On-Cell IPS panel which makes the whole screen pop-out which results in a quality that is crisp with vibrant colors. In other words, the S1’s display is really good. Playing video and music files on the S1 is enjoyable as it has a decent speaker capable of producing crisp audio with subtle bass. If you want to improve your multimedia experience, you may play around with the Sound Enhancement and Picture Mode menus inside settings.

When it comes to imaging, the S1 boasts a 13MP main shooter with a Sony-made sensor and a 2MP front camera. Image quality is decent while the colors have acceptable saturation. In bright conditions, photos taken are good but gets smudgy in low-light.

While image quality will suffice, the S1’s camera are prone to bugs. There was a time when it can’t autofocus which always results in blurred images. After receiving a couple of OTA updates, the camera app suddenly stops working and crashes every time you launch it. We were able to get it working with a factory reset which is something not everyone will be happy to do.

Another issue is that it records at HD resolution (3GP format) even though we have set it to 1080p. Watch sample below:

Looking at the software department, we have Freeme OS 5.3 which is based on Android 5.1 Lollipop. The UI is tweaked similar to Xiaomi’s MIUI and OPPO’s ColorOS – it doesn’t have an app drawer yet simple with colorful icons. 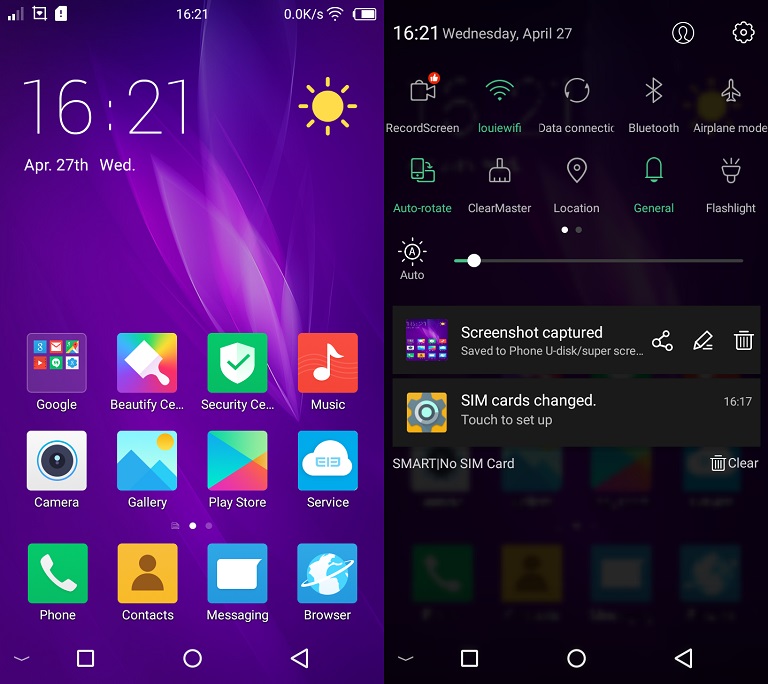 Software features include a Security Center (Cleaner, data manager, anti-virus, call and SMS blocker, etc.), Beautify Center (Themes), and Health Center (physical activity monitor). The fingerprint scanner also comes with its own features like allowing you to use it as a camera trigger, for scrolling, controlling video, and music playback Speaking of the fingerprint scanner, it has a matte finish with a sensitive and responsive sensor. It had no problems detecting our sweaty fingertips, a situation where the TouchID on the iPhone 5s is having problems. When it comes to apps, Elephone did a good thing by pre-installing a few apps – just five from Google (Gmail, Search, Maps, Play Movies, Hangouts). That’s because it only has 8GB of storage. Less the system files and you’re left with only 4.17GB as usable which is very limited in today’s standards.

When it comes to specs, the S1 is far from impressive with MediaTek MT6580 quad-core CPU and 1GB RAM. It should be enough if you’re running basic tasks and light gaming but you’re going to feel it struggling when running lots of apps in the background. 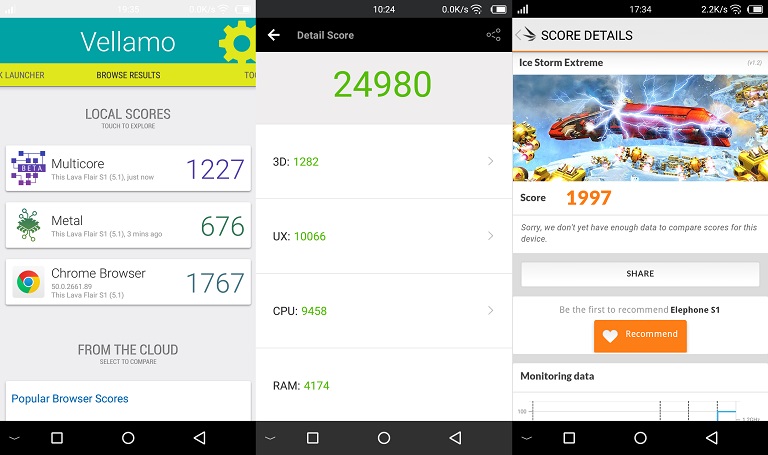 The more serious issue, though, are the software bugs. As mentioned earlier, our unit can’t launch the camera app and just crashes. There was a time that we can’t launch any apps and needed to do a reboot. The auto-brightness sensor doesn’t always work and there are times you can’t even manually adjust it. Elephone sends out minor updates via OTA which is good but none of it have fixed these glaring issues.

When it comes to connectivity, we only have the basics such as WiFi, Bluetooth, and GPS. Mobile data is limited to 3G though which is disappointing. As for call quality, it works as it is supposed to as we can hear and be heard during conversations.

Battery capacity won’t impress as it only has 1,800mAh under the hood. It’s not going to last you the whole day especially if you’re into mobile data and gaming. Using the PC Mark battery test it was only rated at 6 hours and 34 minutes which is below average.

The Elephone S1 is the kind of smartphone that looks good outside but disappointing inside. Not to mention the software bugs that will make any buyer regret his/her purchase. Sure it doesn’t ask much at Php3,999, but it’s going to be a hard sell considering that our local brands have offerings that have better specs at the same price. 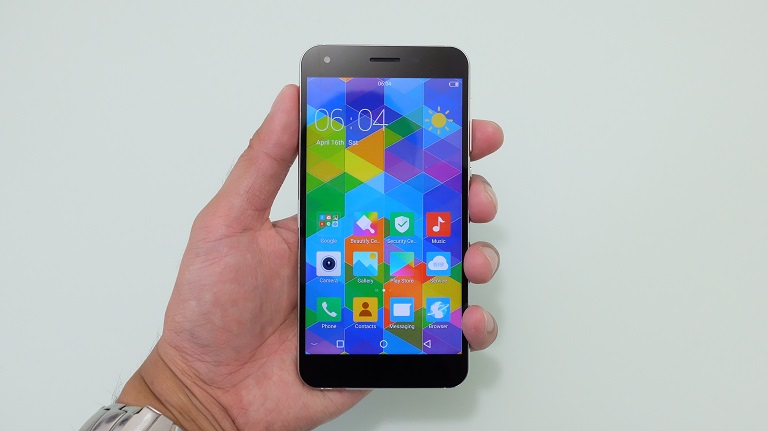 The Elephone S1 is available at Lazada. See listing here.

What we liked about it:
* Good build and design
* Good display
* Affordable price