Huawei’s latest and biggest flagship handset started selling just last week. At 6.1-inches, it ranks among the biggest smartphones to be ever released in the local market. Check out our full review of the Huawei Ascend Mate after the break.

Huawei completely skipped the 5-inch market and went straight to the big 6. Few others have gone this big and positioned itself as a smartphone rather than a tablet. 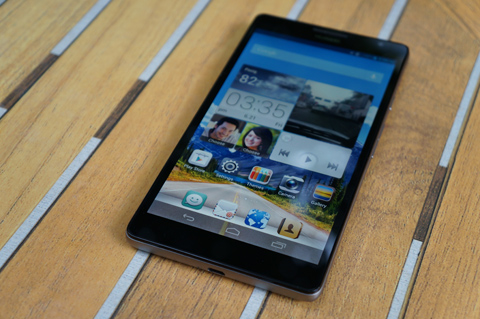 The only other bigger devices in the same category are the Asus FonePad at 7 inches and the Samsung Galaxy Mega 6.3 at 6.3 inches (both also released in the Philippines).

Size does matter and there will be some segment of the consumer market that will be inclined to get an over-sized phone like the Ascend Mate. While most folks will refer to them as phablets, we prefer the term over-sized smartphone. The Ascend Mate feels very solid, and aside from it’s gigantic size, it’s a fairly well-built device. The front panel is completely covered with thick, hard glass is surrounded by a thin metal frame and separated by a thin gap before the narrow bezel.

The power button and volume rocker are both found on the right side of the device while the microSD card slot is on the left side. The 3.5mm audio jack and the micro-SIM card slot are placed on top and the micro-USB port for charging is at the bottom. 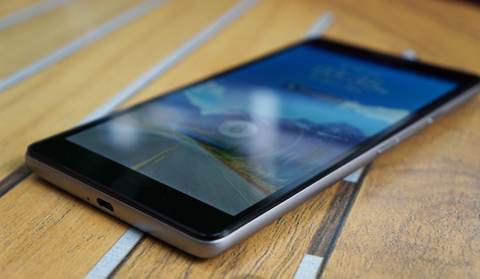 At the back is where the rear camera is positioned along with the small LED flash. At the lower end is where they placed the stereo speakers. The unibody design and slightly thicker from factor (9.9mm) allows for bigger space for the 4,050mAh battery.

The silver trimming around is the sides gives it a two-tone treatment. The polycarbonate materials used in the body feels very sturdy and comes in a slightly matte finish. However, for the white variant, the back side is too glossy and slippery to our liking.

Perhaps the most compelling feature of the Ascend Mate is its extra-large display. At 6.1 inches, the screen size is almost at the border of your typical 7-inch tablets like the Nexus 7. The other concern, of course, would have to be the resolution. With only 720×1280 pixels filling up the 6.1 inch screen, there might not be enough pixels to fill the screen. Surprisingly, the display still looked very good at 241ppi pixel density. The IPS LCD produced good, bright colors while images are clean and crisp. The large slab of display is very pleasing when you watch movies, browse websites and read PDF files or eBooks.

Huawei uses their own Emotion UI on top of the Android ecosystem. The native icon set and widgets are simple but clean although they’re still a little sparse. The three Android soft buttons are part of the screen (Back, Home, Recent Apps) and there’s actually no App drawer so everything you install from Google Play are all scattered in the various home screens. 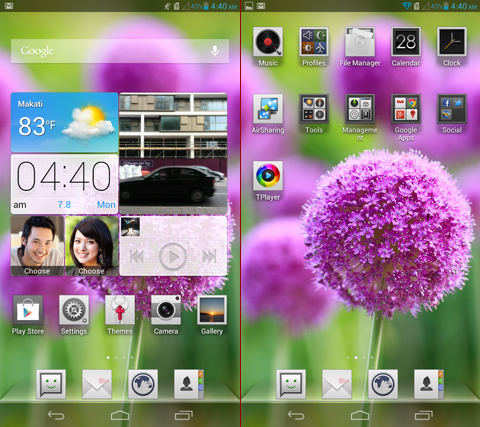 There’s also an option to be able to hide the navigation bar at the bottom corner to give you more screen real estate. 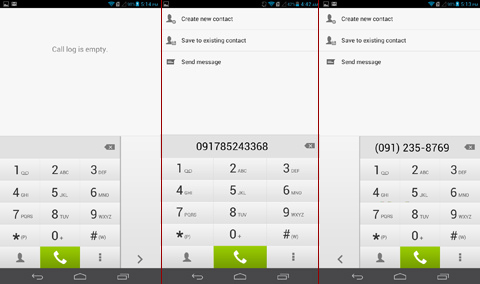 If you’re not too comfortable with two-handed operations when navigating and typing into the virtual keyboard, the Ascend Mate offers single-handed option for the keyboard so you can still use it comfortable with either hand. With the keyboard and keypad shifted to the left or right side oft he large screen, a user may still be able to use and type with just one hand.

The Ascend Mate is big on multimedia. You’ll appreciate the large display when it comes with browsing the web, reading eBooks, or watching movies in HD. In fact, we feel that at 6.1 inches, it can very well replace or supplant the dedicated purpose of slightly larger tablets in the market, like the iPad Mini and the Nexus 7. 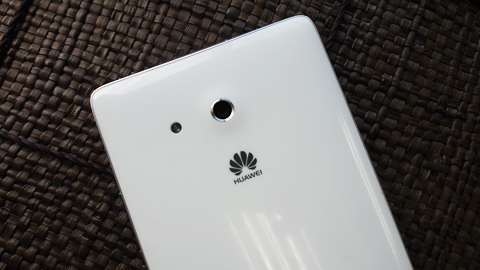 The single speaker grille found at the back may look tiny but it blasts a fairly loud amount of music when cranked right up to the top.

Photos in the outdoors are actually really good but you will notice it significantly degrade in low-light scenarios. The camera has a dozen or so built-in filters which Intragram users might find useful.

Here are sample video clips recorded on full HD with the same camera:

We found that the contract of the picture is somewhat on the saturated side. There’s control for ISO and White Balance as well as Self-timer of either 5 or 10 seconds.

Huawei designed their own chip based on ARM so they’ve been getting a lot of optimizations as well as better scores from other processors in its generation. The quad-core Huawei K3V2 processors runs at 1.5GHz on each core and is the same one they used in their first-generation smartphones from last year, like the Ascend D Quad ZL (which we reviewed here). 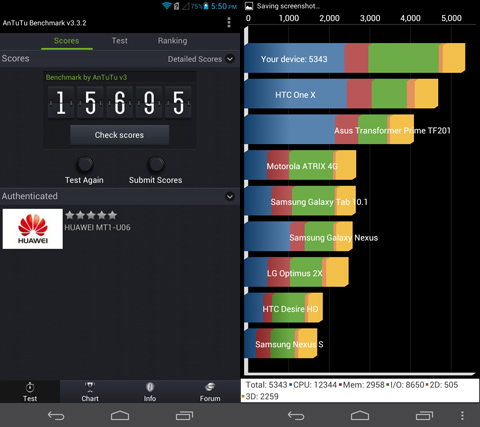 Our standard benchmarks show the Ascend Mate perform somewhere in the middle of the quad-core pack with Quadrant scores of 5,343 and Antutu benchmarks score of 15,695. Nenamark 2 showed a GPU performance of 59.2fps. The handset manages to chow down anything we throw at it — from graphics heavy games to multi-tasking apps and the lot.

While it may not be very comfortable or ergonomic to use the Ascend Mate with one hand when making calls, call quality is exceptionally good. Audio is clean and clear, noise is significantly reduced by dedicated mics at the back and SMS came in mostly on time.

The alternative would be to use a hands-free earphone or wireless Bluetooth headphone to make the voice calls for better comfort. 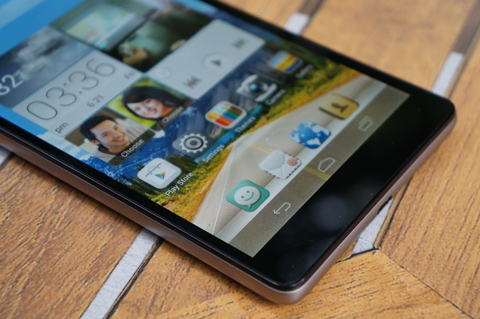 As for connectivity, the Ascend Mate got the basics right with Bluetooth 4.0, WiFi, DLNA and GPS. We were expecting NFC and LTE which could have been a better deal but for the price point, we can’t really demand that much. Nevertheless, the HSPA+ will do just fine and we’re getting 3-4Mbps from that on any good day. 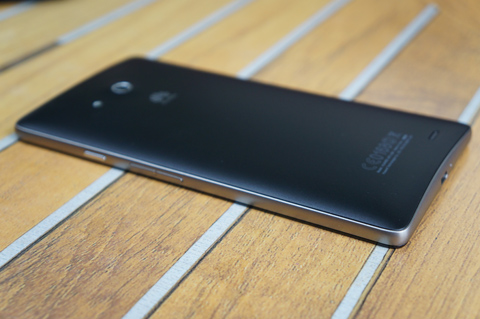 For battery life, our standard battery test took the Ascend Mate as far as 9 hours running a full HD 1080p video in a loop at 50% brightness and 0% volume. However, for regular use in making calls, SMS, mobile internet and running apps, we found it to perform much longer, thanks to the 4,050mAh battery.

The Ascend Mate may not be for everyone but for those looking at over-sized smartphones, this could be it. It’s a very capable smartphone and could be an ideal replacement for a tablet-smartphone combo at a very compelling price point.

A combination of an XL display and an XXL battery in a M-sized price, the Huawei Ascend Mate is as good as you can get for an affordable flagship handset. 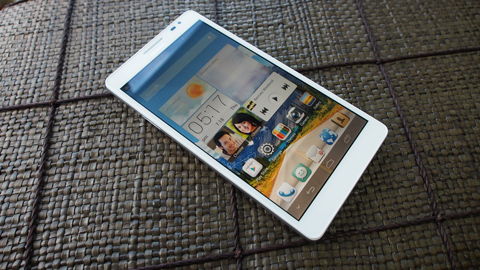 The Huawei Ascend Mate has a suggested retail price of Php16,990 and is available in white and black colors. (Updated: The commercial unit only comes with 1GB RAM and 8GB internal storage)

What we liked about it:
* Very large display size
* Great performance
* Huge battery capacity
* Very affordable for a flagship device

What we did not like:
* No LTE connectivity
* Small internal storage

Disclosure: Huawei Philippines is a banner display advertiser on this site.