Huawei’s G series has always been known for devices bearing polycarbonate bodies and decent specs, but the introduction of the G8 this year with a more premium look may turn some heads as it sports an aluminum-clad body and a fingerprint scanner to boot. Is it something worth considering? Here’s a quick review of the Chinese manufacturer’s mid-range smartphone.

Don’t forget to check out our hands-on and first impressions, which is also integrated into this quick review.

The rounded corners of the G8 and its overall look reminds us of the HTC One M9 sans the speaker grills in front. The front is covered with a beveled Gorilla Glass 3, giving it a nice 2.5D effect. The volume rockers and the power/lock button, which has a nice concentric ring design, are all at the right side. 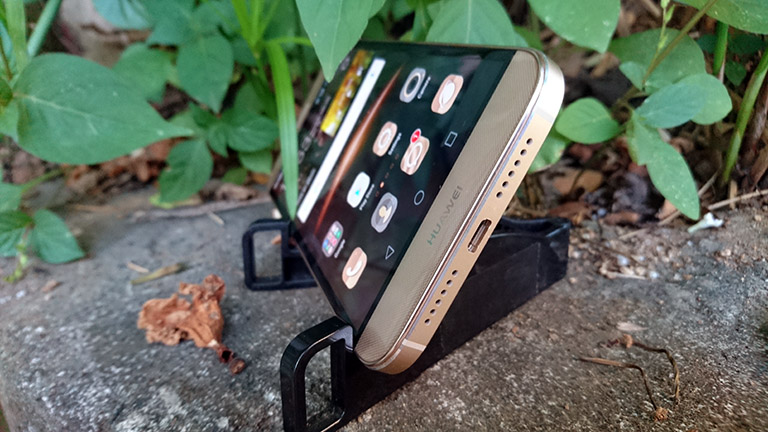 The microUSB port and the speaker grill, with a similar setup as the Mate S with only the right side blasting music and the other for aesthetics, lay at the bottom. The SIM card tray (nano) can be ejected from the left side. With a hybrid setup, users can choose to use the second microSIM tray as a microSD card slot for additional storage space. 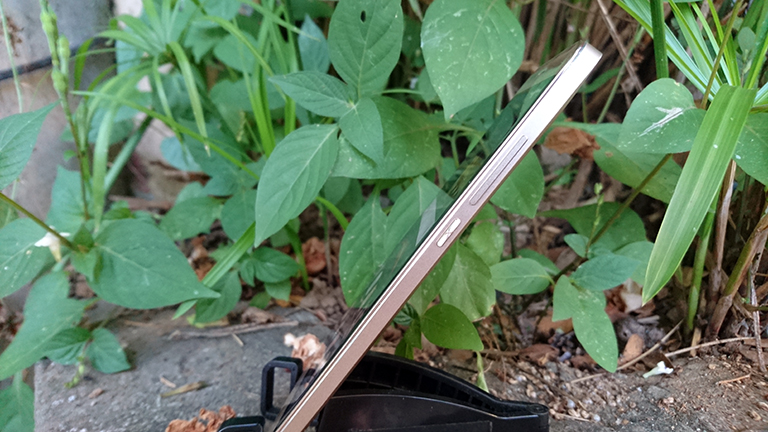 At the back, there are significant parts that make this device unique. The fingerprint scanner in the middle — the first in this series to have one — and the protruding 13MP rear camera are emblazoned with chrome accents are noteworthy, along with the dual tone LED flash. The protruding rear camera can be a bit of a problem especially if you like to place your phone on tables, but might not be a big issue for some. Overall, the aesthetics are top-notch for a smartphone in the mid-range. It looks pleasant thanks to its gold color and a metal unibody. It isn’t that hard to hold, the overall grip feels light, and the fingerprint scanner is very accessible even when you’re operating with one hand.

The display offers good sharpness and colors at a full HD resolution, giving it a pixel density of 400ppi. You may see some color shifting when you view it from the top or bottom; nevertheless, the device still does a great job when viewed from other angles. There’s also a black bezel surrounding the display, adding to the already-present huge ones on each end of the smartphone. Despite all of that, the G8 works well when playing videos as it has a huge 5.5-inch screen which is great for multimedia content. The music blasted from the speakers are of good quality and can fill up a room nicely, up to 86dB on our sound meter. Listening to music with earphones are good as well. 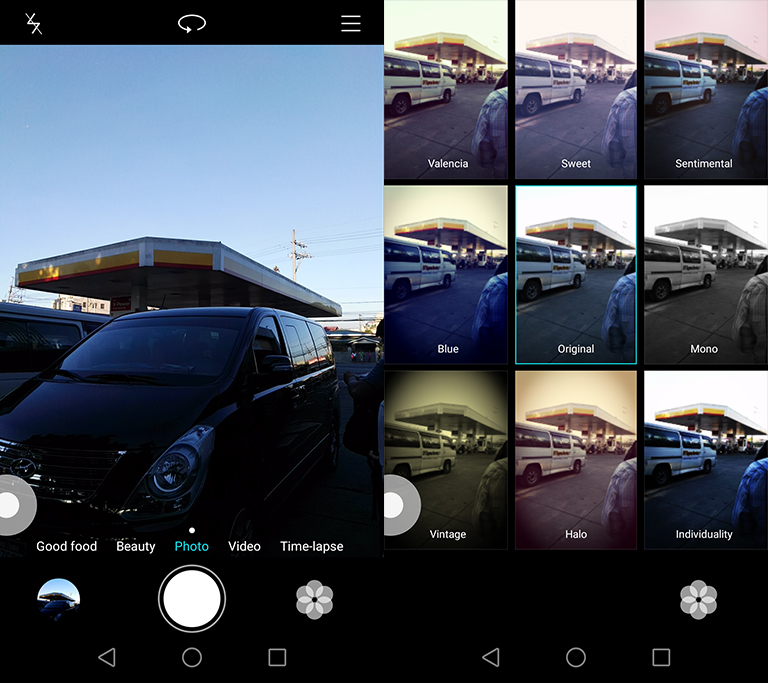 Its cameras are not to be undermined — both the front and rear cameras shoot crisp and vivid photos. The rear camera captures a great amount of light even when used in low-light scenarios. There are lots of modes and live filters you can choose from when taking a picture:

Take a look at some of the sample photos:

The videos we took are good with well-balance sharpness and colors. Take a look at this sample video, taken on a high noon:

As for the things that run under the hood, you’re greeted with Huawei’s proprietary EMUI skin on top of Android 5.1 Lollipop. You might get reacquainted with the skin at the first run — there are no app drawers, so file organization using folders is a must since there’s a nine-home screen limit.  The gold icons that complement the color of the handset, by default, is not something you’d like to keep for a long time but you can change the theme through a built-in theme picker. 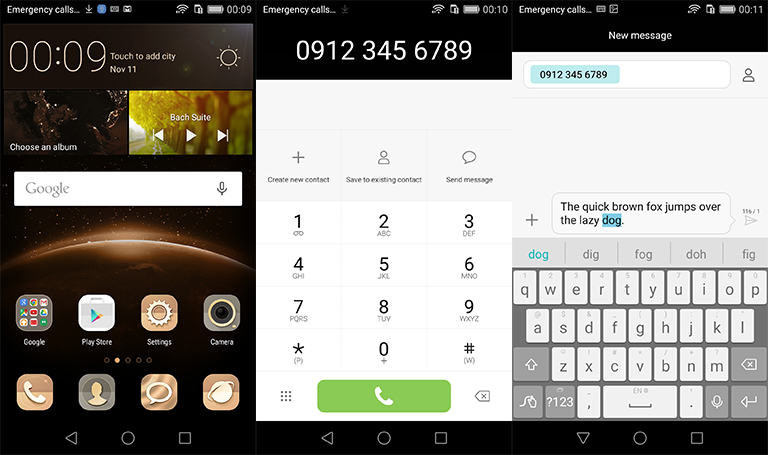 It also has a 32GB of space onboard with 24.7GB of free space to install plenty of apps. It also offers plenty of software features such as double-tap to wake, motion control, scaling down the screen for one-hand UI, and data traffic and application management. Several apps are pre-installed such as WPS office and Facebook, to name a few.

Connectivity is great too — connecting to mobile data is speedy and other connections (WiFi, Bluetooth) work fine as well. Calling on the G8 is good, as we are able to make clear calls. It is the first to be equipped with a fingerprint sensor in this series, and it doesn’t disappoint as it works really accurate and can detect your fingerprints even when they are a bit moist. It can store up to five fingerprints and can be used to unlock your phone directly even when the screen isn’t on, or use it as a shutter when taking selfies. It’s a pretty handy feature if you want to do something on a rush. 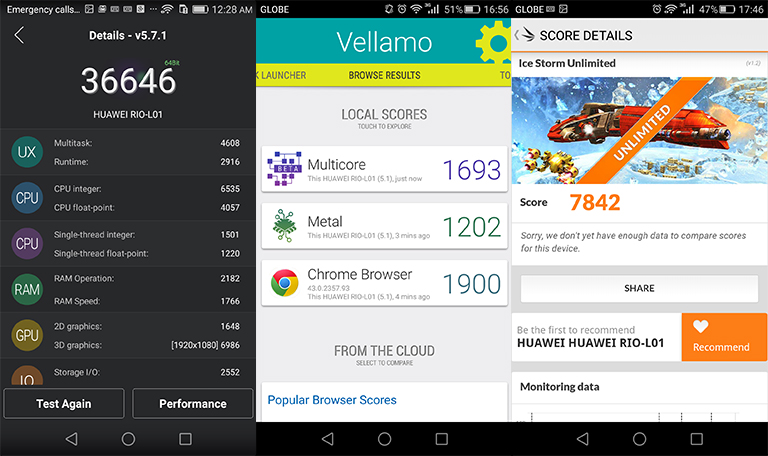 While it may be a bit surprising that Huawei ditched putting its home-baked Kirins on this one, there’s no mistaking putting a Snapdragon 615 SoC and a 3GB RAM, as seen on other smartphones such as the Asus Zenfone Selfie. Multitasking and gaming weren’t issues despite the increments of warmness that were obvious due to the overall build of the device. Here are the benchmarks we got:

Despite having a 5.5-inch Full HD display, the G8 can last throughout a whole day on moderate use with a few percentages left for the next morning. That includes calls, texts, 4G browsing on the way to the city, and connected to the WiFi at the office all day. PCMark battery test shows that the device can last for 7 hours and 42 minutes, while we got over 10 hours on our standard video loop test. More and more mid-range smartphones are being released by the week, and if you’re looking for a smartphone built with premium quality at Php17,990, a price range that’s less than that of the flagships, the Huawei G8 can surely deliver with an all-metal unibody, a good performance, and a great camera. The elegance it exudes from the build and aesthetics alone does justify the price tag, and can surely compete along with other new contenders in the mid-range wars.

With that said, there are also points to consider that could break the deal. There’s the protruding rear camera, and then the use of the hybrid card tray which could make you think twice about using an additional SIM card or additional storage through a microSD card. Either way, the G8 is still something to buy especially if you’re looking for smartphone aesthetics and camera performance at a budget of Php18K.

What we liked about it:
* Great camera
* Top-notch design and build
* Accurate fingerprint sensor

What we didn’t like:
* No dedicated microSD card slot
* Protruding rear camera
* EMUI icons are a bit bad