MyPhone Rio 2 leaks ahead of launch

Here is your first look at Myphone‘s newest budget flagship, the Rio 2, sporting Android 5.0, a quad-core processor, and a 5-inch screen out of the box. 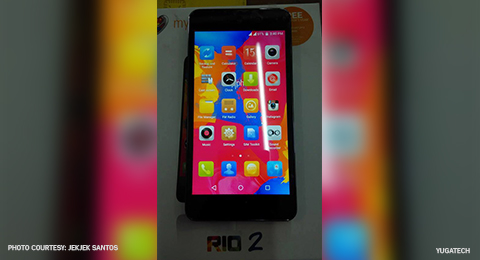 The next generation Rio is one of the local company’s first non-Google One Android Lollipop smartphone, and it sports a bigger battery capacity.

If we’re going to follow how the Rio changed the local smartphone scene around the same time last year, this device could probably be priced at the Php5k range. MyPhone is expected to unveil the Rio 2 along with three new devices for both Rio and Infinity lines by the end of the month.

Thanks to JekJek Santos. Photos used with permission.

1 Gig of RAM is enough dipshits.

It isnt the same specs as the latest MyPhone Rio v2 KK
the latest has 4gb rom only, but this MP RIO 2 has 8gb rom

Leave it to a local brand to try to create hype over a mind-numbingly mediocre phone. Pinoy nga naman.

Just sharing.. Based on my experience

I think that depends on the phone and the OS of the phone SIRE. Sa 4.4 May pref storage loc na option. :)

and so the myphone haters come out again. typical.

And the myphone employees come out again. typical too.

So, basically…same specs? Why woudl you want to upgrade then?? becuase of lollipop?