O+ is bringing their own version of a 5-incher smartphone into the Philippines with this quad-core powered O+ 8.15 Jellybean smartphone. We’ve been testing this unit, fresh from their US headquarters, for several days now so we can share with you our initial impressions.

The O+ 8.15 is set to be released in Metro Manila this May 11 with an introductory price of Php9,990 during opening day sale (although regular price will be set at Php12,990 after that). 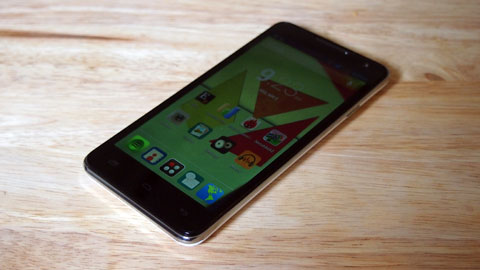 The handset has a 5-inch HD display with a resolution of 1280×720 pixels, giving it a pixel density of 294ppi. The glass display feels tough and solid although we cannot verify if it’s the same scratch-resistant glass O+ USA used in the 8.12 handset.

The unit is actually pretty thin at 8.4mm — thinner than Galaxy S3 (8.6mm), Note 2 (9.4mm), HTC Butterfly (9.1mm) and Neuxs 4 (9.1mm). The back has a slightly curved shape and even the white back cover and silver trimming has that same cut that reminds us of the Xperia Arc. Of course, that does not discount the fact that the camera at the back protrudes a bit.

The device feels very solid, firm and has a good grip to it despite being in the 5-inch category where most other handsets are a bit unweildy. 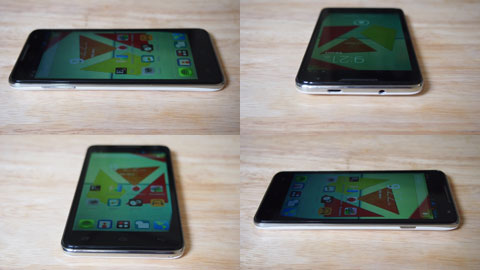 The front-panel is plain and pure black, with only the front-facing camera and phone speakers that are visible. The soft button at the bottom corner lights up when touched. The facade actually reminds us of the LG Optimus G.

The back side has a white polycarbonate battery cover with a slightly polished finish. The 8MP camera is positioned on the top corner along with the LED flash and a microphone (probably for noise-canceling).

The speaker grills are found on the lower corner with the print of O+ USA. The micro-USB port and 3.5mm audio jack is on the top side, power button on the right side and volume controls on the left. 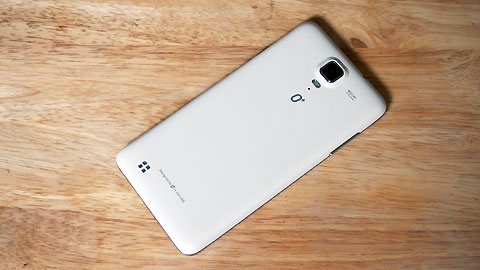 The hardware configuration of the O+ 8.15 looks pretty good and is at par with most 1st or 2nd generation quad-core smartphones that are already out in the market. It’s worth noting that O+ managed to get this device running on Android 4.2.1 right out of the box, instead of the older 4.1.2 Jellybean version.

We ran our standard suite of benchmarks to see how this device fares with the others in its price category. Nenamark 2 showed a maximum frame rate of 45.7fps which is already pretty good.

Results for the Quadrant Benchmark and Antutu Benchmark are equally good — clocking in at 3,995 with Quadrant and 13,189 with Antutu, repectively. 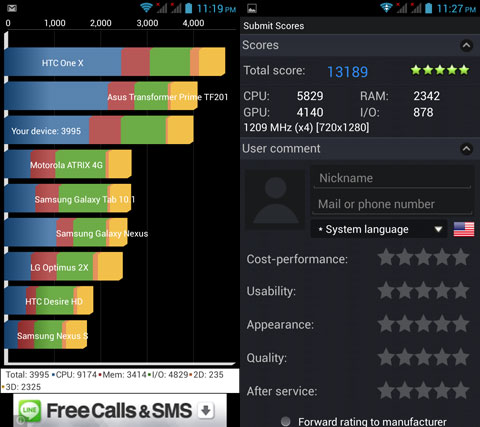 Hardware configuration aside, the O+ 8.15 is actually the nicest looking phone that ever came out of O+ — nice, simple design, solid build quality, pretty good specs and an affordable price. We’re actually wondering what the black color would look like once it comes out in stores but we think that will look much better than the white model we have here.

If there’s anything I think they need to work on, it would be the UI and the widgets. But then, that can easily be fixed by downloading and changing home launchers from Google Play Store. 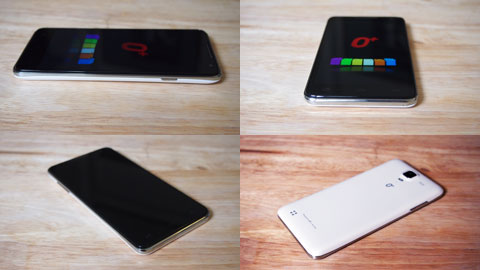