The Samsung Galaxy A30 will be launching very soon in the Philippines, so I’m putting its specs to the test by comparing it with another popular smartphone in the country, the ASUS ZenFone Max Pro M2. Which one will have the advantage in each aspect? Check out my specs comparison below to find out! 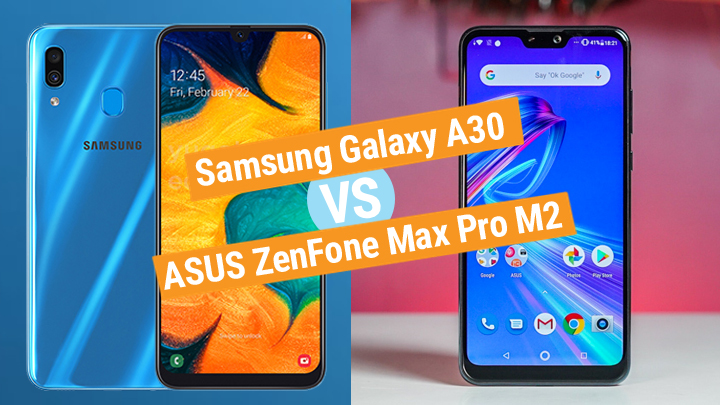 The Galaxy A30 sports an AMOLED panel while the Max Pro M2 comes with an IPS panel. In terms of viewing experience, the former produces darker blacks and brighter whites while the latter will have more natural colors. Both of the devices have pros and cons when it comes to displays, the former being prone to screen burn-ins while the latter will consume more power. Overall, this will be up to the user on which panel they prefer more. You can learn more about screen displays here.

One main advantage of the Max Pro M2, however, is that it comes with a Gorilla Glass 6 which is said to be stronger and more durable than the Galaxy A30’s Gorilla Glass 3.

In terms of performance, the Snapdragon 660 chipset of the Max Pro M2 outperforms the Exynos 7904 of the Galaxy A30 based on the maximum clock speed that they can achieve. The former has 1.95GHz while the latter only has 1.8GHz which means that the Max Pro M2 performs faster.

I took the data that we have on the Galaxy A8+ since it carries the same GPU as the A30, but since we’re talking about graphics performance, we can safely say that the Max Pro M2 will have the upper hand in this aspect.

For camera performance, the Galaxy A30 comes with a higher main rear camera resolution and a wider aperture which means that the photos produced should be brighter under low-light conditions as compared with the Max Pro M2. People who are also into selfies may consider the former given that it has a higher front camera resolution. However, camera quality is not just about the number of megapixels that a smartphone have. We’ll test out both of the devices’ performance once we get our hands on them.

The Galaxy A30 sports a USB Type-C port while the Max Pro M2 has a micro USB. The former gives a faster file transfer speed as compared with the latter. The Max Pro M2, on the other hand, has a 5-magnet speaker with NXP 9874 smart amp which enhances the audio quality. It also runs on Stock Android which is the preferred user interface by some people including me.

As for battery performance, the Max Pro M2 carries a 5,000mAh battery with flash charge technology while the Galaxy A30 has 4,000mAh with fast charging which is still plenty. We don’t know yet if the latter can outlast the former’s 16 Hours and 30 Minutes video playback time. Stay tuned as we’ll be testing the latter’s battery life once we get it.

The Samsung Galaxy A30 is said to price at PHP 13,990 while the ZenFone Max Pro M2’s price is at PHP 14,995 for the 6GB RAM variant. You can go with the latter if performance is your number one priority along with large battery capacity and stock Android experience. On the other hand, you can go with the Galaxy A30 if you want to be up-to-date with features such as a USB Type-C and Android 9 Pie.