Vivo has just officially launched its latest offering and just as the trend goes in the smartphone scene, the newest handset caters to the selfie-centric crowd and it comes with an ‘s’ in its name. Is it worth going for with its Php2K increase in price compared to the V5? We find out.

The Vivo V5s is the successor of the Vivo V5 with just minor upgrades hence the additional ‘s’ in its name. It still has a 5.5-inch display with a 1280 x 720 resolution topped with 2.5D curved Gorilla Glass. 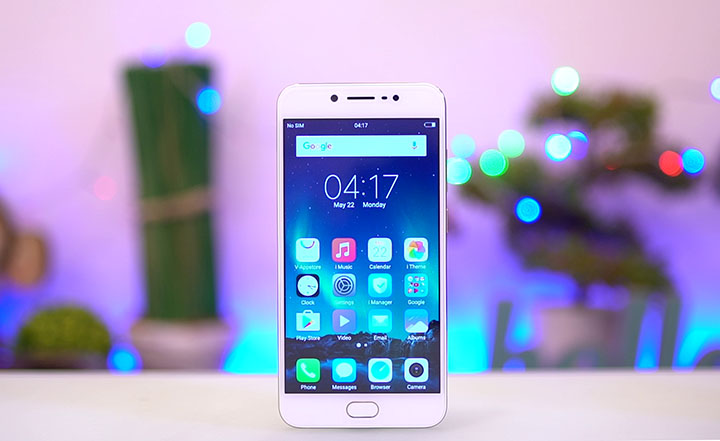 On top of the display is the 20MP front-facing camera with a f/2.0 aperture for your bright and high-resolution selfies. Meanwhile, down at the bottom is the fingerprint scanner. The sides of the phones are kept clean with minimal antenna lines blending with the unibody design of the V5s. This is another difference of the V5s with the V5. The V5 only has straight antenna bands at the rear while the V5s carries U-Type lines for a neat look. 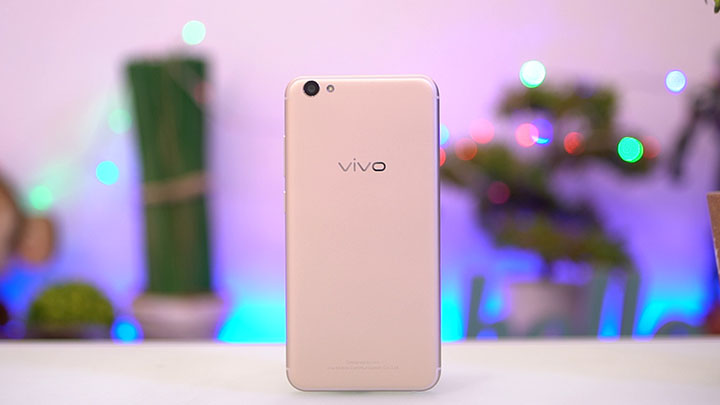 Both the volume rocker and power/lock button are on the right. On the left is just the hybrid card tray for the SIM and microSD card. 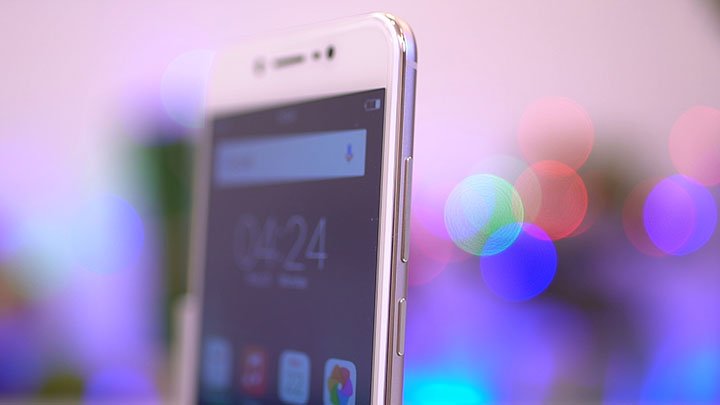 The top of the phone is virtually clean because the 3.5mm port, microUSB port, and the loudspeaker grilles are all located at the bottom end. 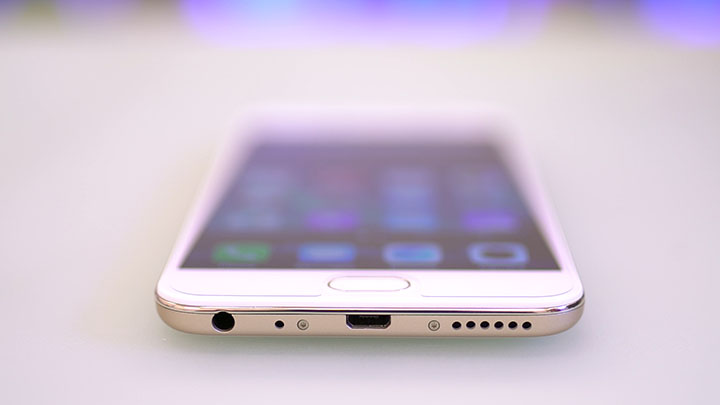 The back of the phone shows the refreshed design of the V5s. It shows a similar design with its more expensive sibling, the Vivo V5 Plus, or as most would say — like an iPhone 7. 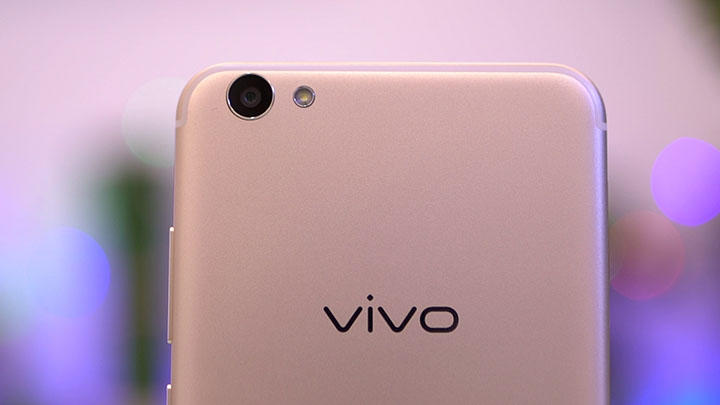 Here sits the 13MP PDAF rear camera with its LED flash. We do find the placement of the rear camera to be a bit off to the top but it’s just us nitpicking.

With its 5.5-inch display, the V5s carries the same modest HD resolution at 720p just like the V5. We watched a couple of videos and could say that it produces decent brightness and effective contrast. These help details in images to pop out more although if you look closely, you would already begin to notice pixelation. Colors are sparingly saturated which would pass as acceptable to casual viewers. 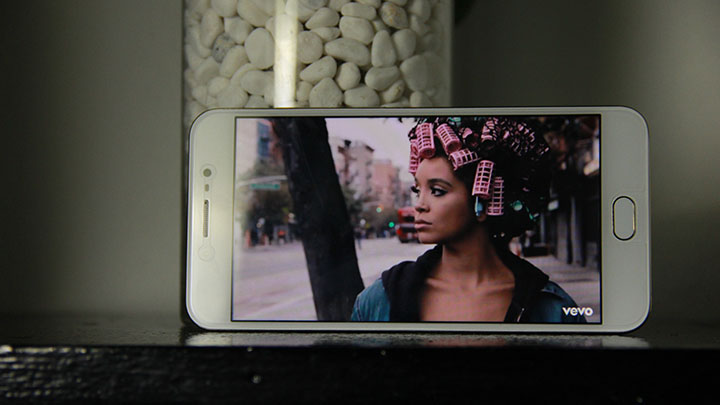 Vivo also wanted better-than-stock audio on the V5 and implemented a Hi-Fi audio chip. Listening to music on headphones proved to be satisfying with its wide range of details, although we didn’t really notice a significant difference when compared to phones without a dedicated audio chip when playing on its speaker. 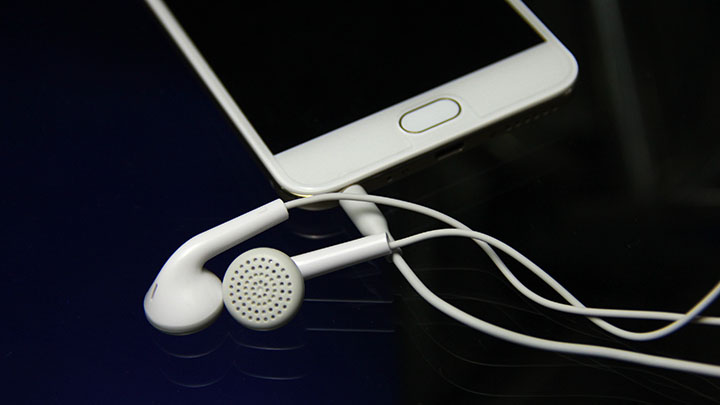 Using its bundled earphones, however, provided clear details and highlights even though they’re just standard in-ears thanks to the AK4376 audio chip.

The handset runs on Android’s 6.0 Marshmallow and is layered with the company’s FunTouch OS version 3.0 that still looks like it was inspired from iPhone’s UI. It lacks an app tray and has the capability to bring up the quick menu by swiping up from the bottom of the screen. 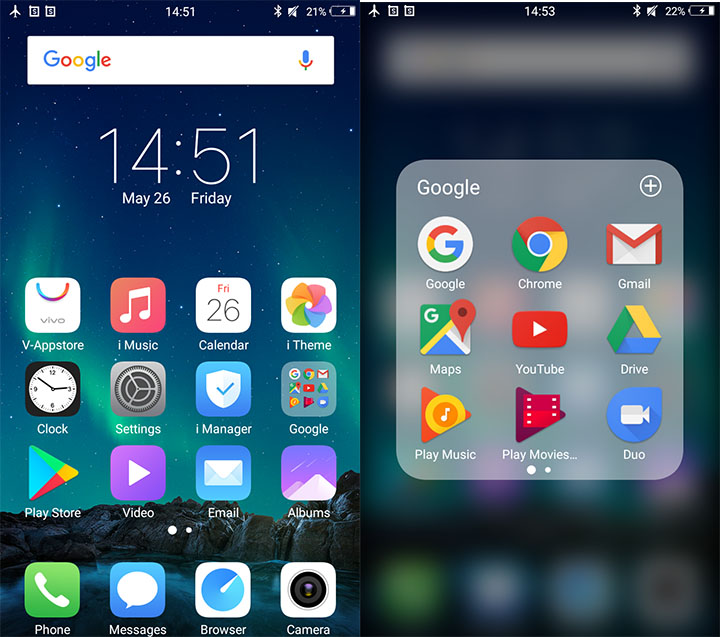 Overall, the interface looks neat and is fluid for navigation. If you have apps flooding your main screen, however, all you can do is group them together in folders to achieve an organized look. The V5s carries 64GB worth of internal storage which is double the V5. Out of that, about 52GB is available out of the box for media files and apps with the rest eaten up by the software itself. If that’s not enough for you, there’s always the option to mount an additional storage via microSD. 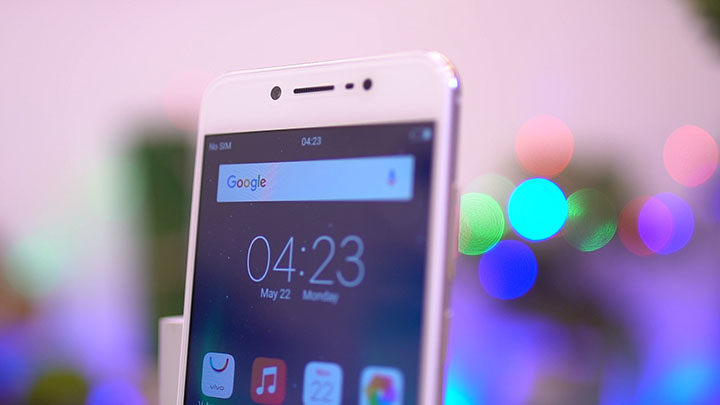 The camera has been kept intact with its 13MP rear shooter complete with PDAF and a LED flash, the handset produces images with impressive dynamic range and details. As you can see on the sample images below, its rear-facing camera gets good details on the bright areas and dim spots alike.

As for the main attraction, its front camera with its 20-megapixel sensor was made using Sony’s technology and is accompanied by an F2.0 aperture and a soft front-facing LED flash to illuminate your selfies in low light situations. The company knows that a soft light is key to not overexpose the photo and it does work well as the effect appears natural. 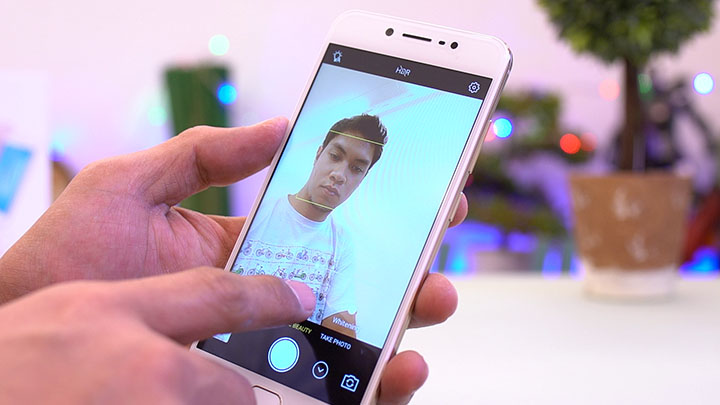 Since it’s a selfie-centric smartphone, it has a dedicated Face Beauty shooting mode that applies filters to try and make your face blemish-free. It basically blurs and softens details so the outcome should be a fairer skin. Users can set the intensity of the beautify filter from 0 all the way to 100.

Selfie shots were actually more impressive compared to other beautification filters we’ve tested before. This is because the software makes the effect look natural which is very important. You wouldn’t want your face to look obviously edited, now, would you? Although, we found its weakness when you take a selfie inside a moving car at night. The result is a blurry image due to the unstable camera and slower shutter speed to accommodate more light into its sensor.

Inside, it sports a 64-bit octa-core processor from MediaTek with 4GB of RAM. This combination is actually capable of doing heavy tasks like gaming and running resource-heavy apps. We’ve had it for a week as our main driver and we’re happy to report that it handled itself well during our daily operations.

Switching from app to app showed no lags and there were no programs crashing during our entire time with it. Games like Asphalt 8: Airborne also showed what its 64-bit processor can do, although we noticed the device tends to get hot when we play games for a period of time. 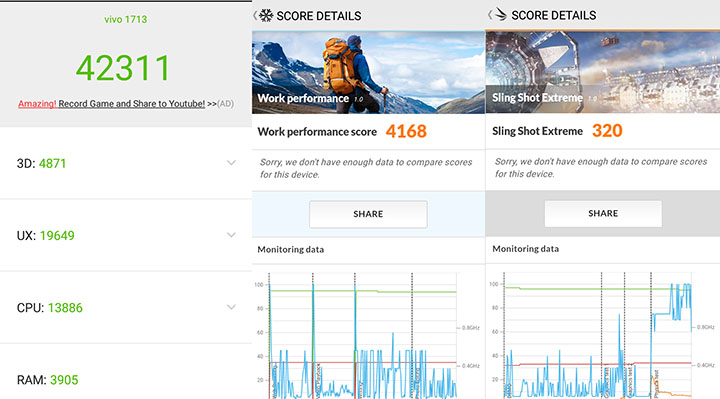 We were also able to do our benchmark tests and below are the scores for comparison with other devices:

The Vivo V5 got the bases covered in terms of connectivity as it has 4G for fast mobile data (in PH standards, of course), Wi-Fi, Bluetooth, GPS with A-GPS, and USB-OTG support so you can open files from a portable USB while on the go. Though there’s LTE onboard, there’s unfortunately no mention of 700MHz support. 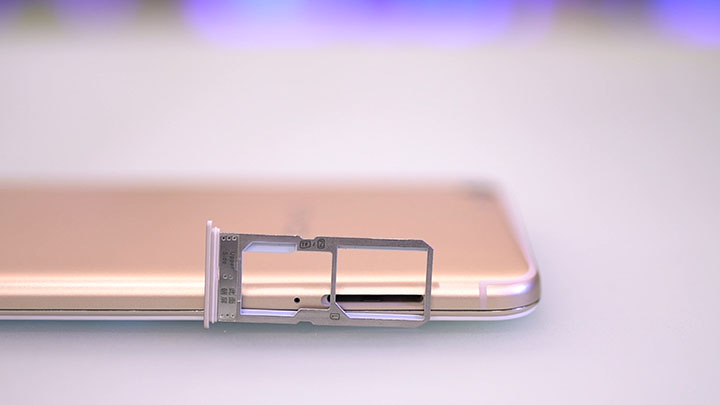 Using it for voice communication, we’ve had no hiccups as far as audio and call quality are concerned. We could clearly hear the other person and this was also the case for the other end. 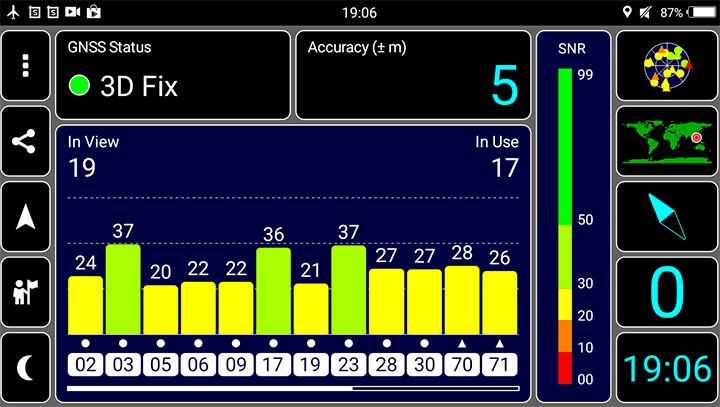 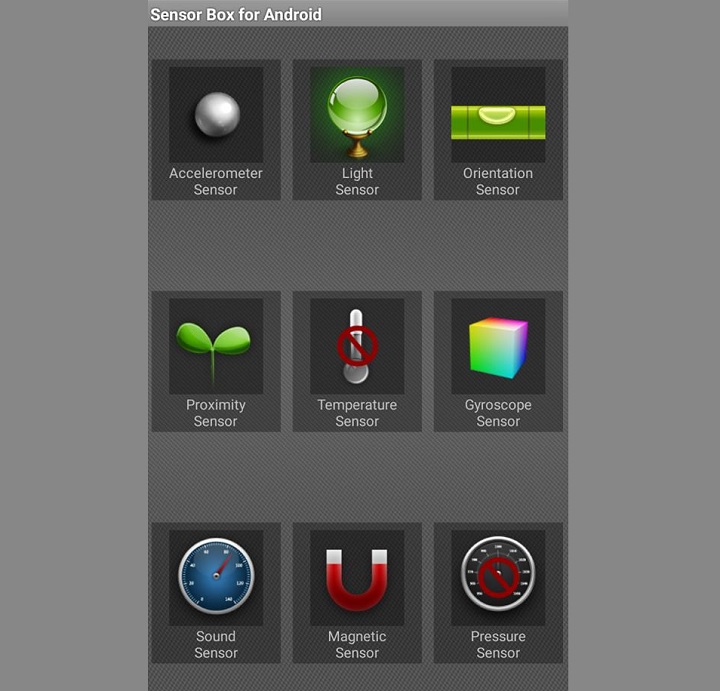 On the other hand, GPS with its A-GPS is pretty accurate when used for navigation apps like Google Maps, Waze, and Strava. There’s also Bluetooth, Wi-Fi 802.11 a/b/g/n, Wi-Fi Direct, DLNA, and Wi-Fi Hotspot for sharing your connection.

Rocking a 3000mAh non-removable battery, the V5 could last us a whole day on a single charge thanks to its modest 720p display. We also didn’t forget to run PCMark Battery Test where it yielded 9 hours and 19 minutes compared to the 8 hours and 27 minutes of run time for the V5. 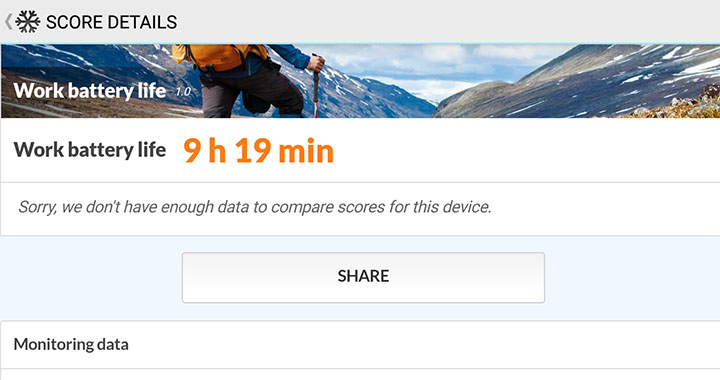 As for our standard video loop test that involves continuously playing a media file on Airplane Mode with 50% brightness and volume, the V5s was able to last for 14 hours and 44 minutes. This is a lot longer than the V5 with its 11 hours and 52 minutes of result during our time.

On the other hand, charging the device for exactly one hour only yielded 48% of power.

In the end, it all boils down to considering the Php14,990 price point of the V5s. With that, you get double the storage space of the V5, an updated Funtouch OS, and a new unibody design. Everything else is pretty much the same. 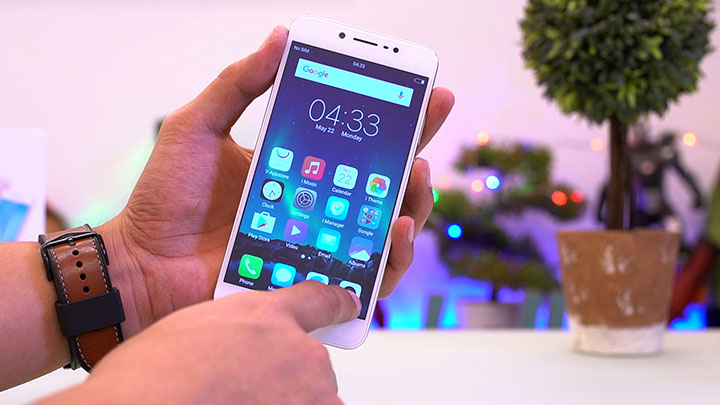 With those in mind, we’d say that the additional Php2K in price is worth going for over the V5. This is because aside from specs, we also gathered better battery time and benchmark results on the V5s. It still doesn’t have support for the 700MHz frequency, though, so that’s another thing to consider if you’re a heavy data user.