Both Xiaomi and Huawei have recently unveiled their flagship devices for 2020, the Mi 10-series, and the Huawei P40-series. While it’d be amazing to get the Mi 10 Pro or the P40 Pro+, they may be out of your budget. So, to those looking to get a budget-friendly flagship device this year, we compared the cheapest variant of each series, the Mi 10 and P40. Which phone should you get? Find out here! 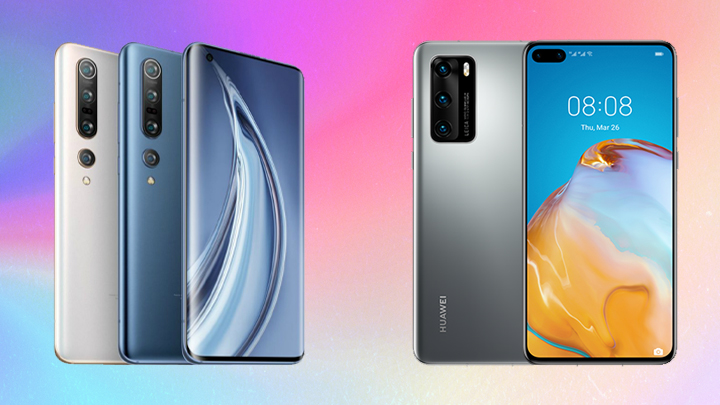 While both smartphones have the same resolution, the Xiaomi Mi 10 has a larger, 6.67-inch AMOLED, HDR10+ capable display with a faster 90Hz refresh rate and 180Hz touch response rate. Meanwhile, the Huawei P40 has a smaller 6.1-inch OLED display. For protection, the Mi 10 also comes with Corning Gorilla Glass 5, while Huawei is yet to disclose if they used glass protection for the P40’s display.

Both devices sport the latest 5G capable flagship chipsets from Qualcomm and HiSilicon. While both chipsets could handle any task you throw at it, the Mi 10 comes with Super VC Liquid Cooling, which should allow the device to sustain higher clock speeds over longer periods. In terms of memory configuration, the Mi 10 comes with up to 12GB of LPDDR5 and up to 256GB of UFS 3.0. Meanwhile, the Huawei P40 comes with up to 8GB of RAM and up to 256GB of storage. Additionally, users can add up to an additional 256GB storage via NM Cards.

On paper, the Xiaomi Mi 10 trumps the Huawei P40 thanks to its massive 108MP primary camera, accompanied by a 13MP ultra-wide, 2MP macro, and 2MP depth sensor. That being said, the P40’s triple camera system isn’t anything to scoff at. It has a 50MP RYYB primary camera, 16MP ultra-wide, and an 8MP telephoto with 3x optical and OIS. as for the front camera, the Huawei P40 is better equipped, with its 32MP front shooter paired with an IR depth sensor. Meanwhile, the Mi 10 comes with a 20MP front camera.

In terms of protection, the Huawei P40 does appear to be more durable to dust and water splashes thanks to its IP53 water and dust resistance rating.

Both devices are running on Android 10, with each company’s skins, MIUI 11 for the Mi 10, and EMUI 10.1 for the P40. The main difference between the two is that the P40 runs on Huawei Mobile Services, while the Mi 10 comes with Google Mobile Services built-in.

The Xiaomi Mi 10 and Huawei P40 are truly flagship devices, despite their lower costs. They have great looking displays, the best chipset from Snapdragon and HiSilicon, 5G connectivity, and amazing camera systems. However, between the two devices, the Mi 10 does look better on paper. It’s got a larger, faster display, more RAM, a higher resolution rear camera, a larger battery with faster-charging support, and, most notably, Google Mobile Services.

That said, the Huawei P40 is still an excellent choice for those looking for high-performance phones. Its camera system, as stated earlier, isn’t anything to scoff at, and its included IR depth sensor allows users to take advantage of AI-based gesture controls.

Which of these two phones gets you more excited? Let us know in the comments section below!