Xiaomi has officially launched two smartphones as part of its return in the Philippine market. One is the Redmi 5 Plus which we already reviewed, while the other is the affordable Redmi 5A. The company is branding the Redmi 5A as the “entry-level smartphone king” but does it stay true to its claim? Let’s find out in our full review!

Before all that though, let’s check out what’s inside the box.

One of the first things you’ll notice about the Redmi 5A is its size. It actually belongs to a once famous, and now rare, breed of tiny form factor devices. This is due to its 5-inch 16:9 aspect ratio display and body, which is the common setup of smartphones years ago. That tiny form factor, though, has its advantages like it’s easier to hold and comes with a decent 294ppi pixel density despite its HD resolution.

Up front is the 5-inch HD IPS Display and located above it are the earpiece, sensors, and 5MP shooter for selfies. Down below are three unlit capacitive navigation keys for Recent Apps, Home, and Back which can be a problem when used in the dark. As for the notifications light, it is located just below the Home key, a very odd placement.

On the right are the power/lock button and volume rockers.

On the left are the slots for the dedicated dual nano-SIM and microSD card trays.

Found up top are the 3.5mm audio port, Ir blaster, and secondary microphone.

Down below are the micro USB port and main microphone.

Flip it on its back and you will see the 13MP camera, LED flash, and loudspeaker.

In the hands, the Redmi 5A doesn’t feel that premium due to its plastic build, but it’s solid with a decent heft at 137g. The rounded corners and rear that tapers at the edges make it easy to grip despite the 8.35mm thick body. Overall, it’s a simple device to look at. Noticeably absent though, is any form of fingerprint security.

As mentioned earlier, the Redmi 5A is equipped with a 5-inch HD IPS display. Despite the low resolution, the device is able to maintain a respectable 294-pixel density, all thanks to that small 5-inch screen. The display itself has crisp and sharp details and color reproduction. Accuracy and viewing angles are above average. It’s actually a very nice display to look at, despite the HD resolution. Xiaomi did well in equipping the device with a small screen.

As for audio-quality, we have a pretty average loudspeaker. It can get loud without losing much clarity and the Mids and Highs are there and sound good but like any other smartphone especially at this price point, lows are non-existent. It’s enough to fill a small room with music but we advise that you hook up your favorite audio gear or speaker to enjoy a more immersive audio experience.

Xiaomi is well-known in manufacturing devices with excellent performance. In order to keep that in check, the company has to compromise on a few aspects, especially if they go down a price point. So, in order to beef up the Redmi 5A’s performance, Xiaomi compromised its camera capabilities. That’s not to say they are abysmal, but performance is still pretty sub-par. 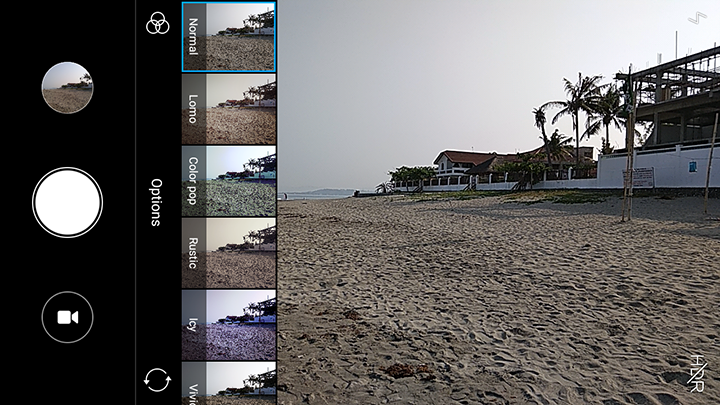 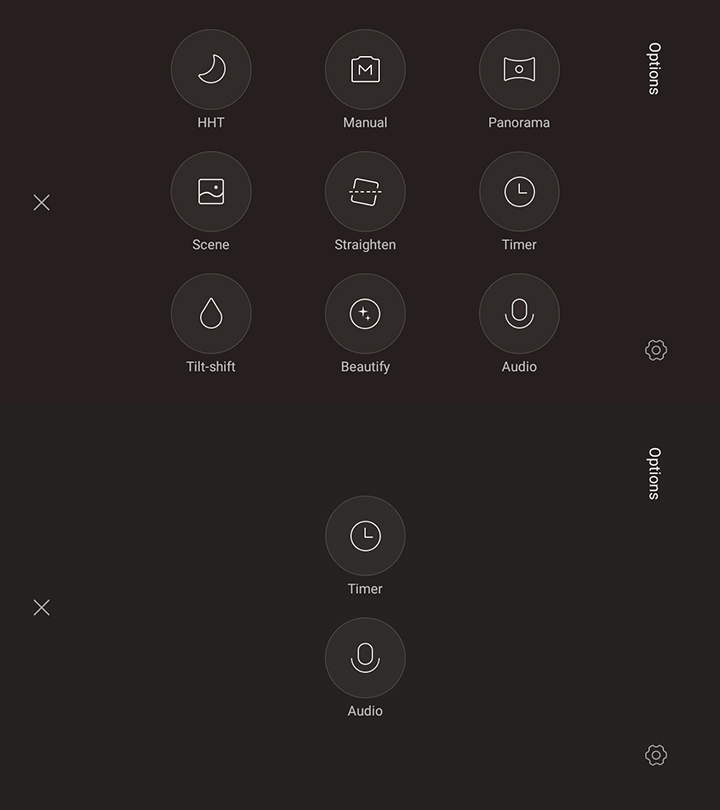 Moving on to quality. While the rear cameras can produce good images, especially in well-lit conditions, most of the time you’ll be left with shots that look dull and lacks detail. Color reproduction, accuracy, and sharpness are also not that great. Low-light shots are even worse as noise and grain are present and quality suffers a lot. The LED flash doesn’t help too as it overexposes the subject. Macro shots, though, are a bit better and have greater sharpness and detail. The device’s rear camera certainly won’t impress, but in the right conditions, it can still be useful for quick shots and social media uploads. Just don’t expect anyone to be “wowed” by your photos.

The front camera, on the other hand, are a bit better. Selfies in brightly lit areas have good detail, color reproduction, accuracy, and sharpness. Although, there are noticeable grain and noises, even in well-lit conditions. Like the rear camera, low-light performance of the front is just bad. Beautification is simple; you choose between the smart and Pro modes. Pro mode lets you adjust skin tone and thickness, while smart mode lets you choose between low, medium, or high beautification. The front cam also has an auto age and gender detect feature, which is inaccurate at times, but still fun to have. Overall, you get a decent camera that can adequately provide usable selfies.

As for video recording, it maxes out at 1080, 30fps in MP4 format. Quality is sub-par and audio sounds busted, but autofocus is good and stable. Still, we won’t recommend you use this for capturing memories or important events. Check out the sample video. 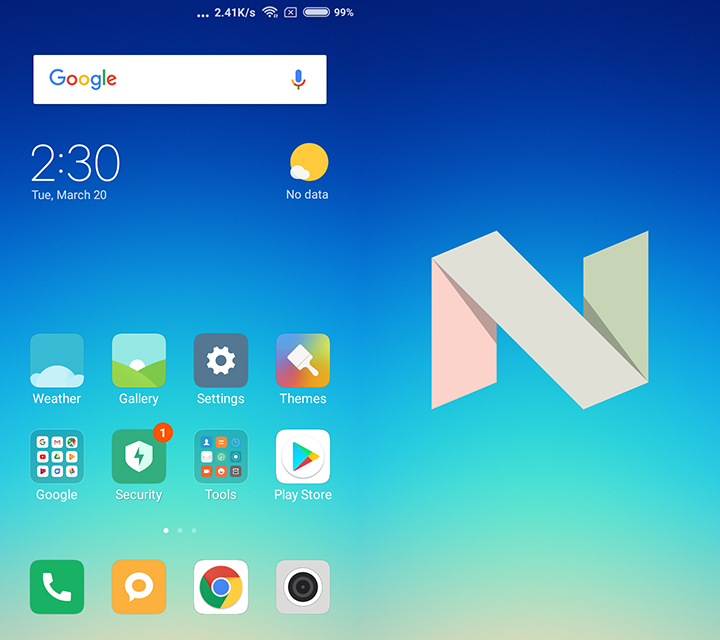 Handling the software department for the Redmi 5A is Xiaomi’s very own MIUI 9 on top of Android 7.1 Nougat. As always, we are treated with the whole home screen affaire where apps are placed on home screens instead of an app drawer. Users familiar with Xiaomi’s UI will feel right at home. The software also takes advantage of the new features that come with MIUI 9. 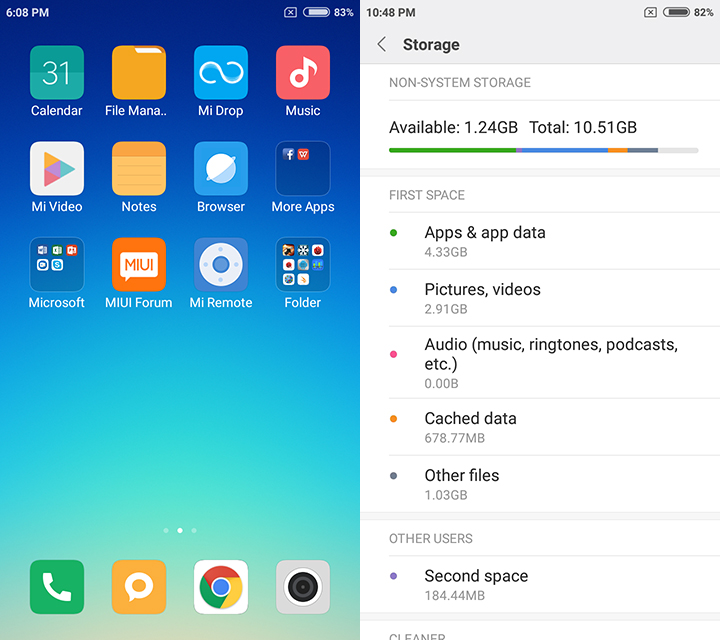 As for pre-installed apps, we have quite a few, thankfully they can easily be uninstalled. These apps are a bunch of Microsoft Office apps, Skype, WPS Office, and a few of Xiaomi’s homebrew (MIUI Forum and Music). Paired with the usual suite of Google Apps you’ll be left with 10.51GB out of the initial 16GB. It’s possible to expand this via microSD and thankyfully you need not sacrifice the 2nd SIM slot. 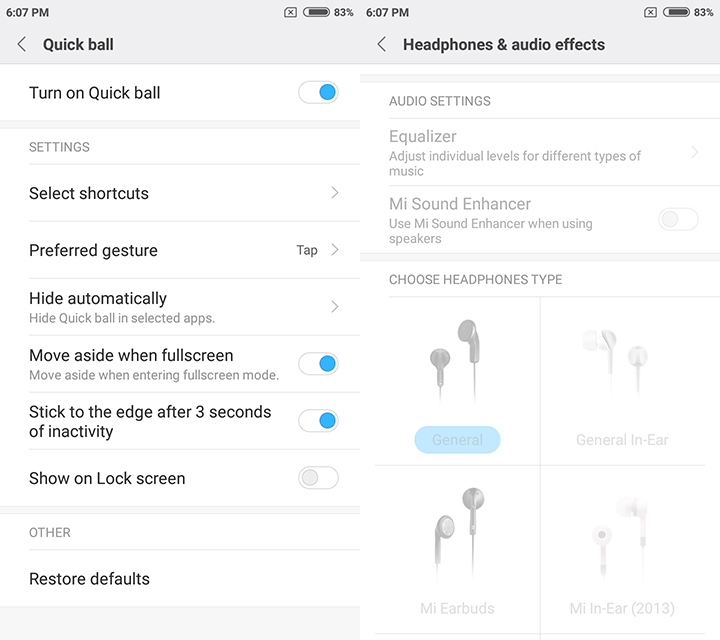 Feature-wise we have plenty to choose from, like the various tools at the user’s disposal such as a QR scanner, Screen recorder, Compass, and Downloader. We also have gestures, shortcuts, and additional settings which include Second Space (creates a secondary separate phone space in the device), double tap to wake, one-hand mode, controls for Mi headphones and earphones, and Quick ball (which is similar to Apple’s AssistiveTouch). Overall we get a bunch of helpful and useful features, which is always nice to have. 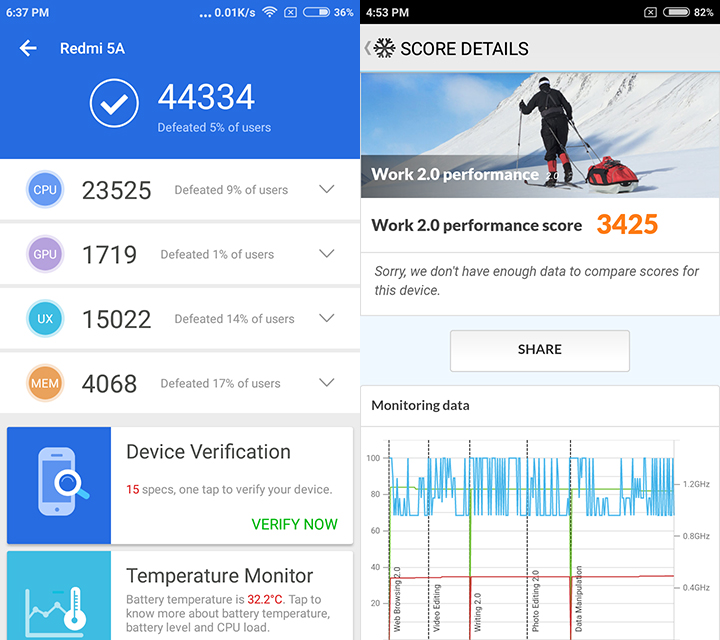 Powering the device is a Qualcomm Snapdragon 425 quad-core chipset, Adreno 308 GPU, and 2GB of RAM. Performance is smooth for an entry-level device as mundane tasks like browsing, home navigation, and social media consumption are a breeze. The 2GB RAM might prove to be insufficient at times but light to moderate multitasking is still possible. Based on the benchmarks below, the performance of the phone is decent for its class. It’s also more than capable of running light to moderate games. Overall, you get a pretty decent tiny powerhouse.

As for gaming, as mentioned earlier, the Redmi 5A can handle light to moderate games pretty well. Games such as Candy Crush and Zombie Tsunami run smoothly, while moderate games like Rules of Survival, Mobile Legends, and Vain Glory suffer from frame drops but are still relatively playable. Heavier games like Tekken, Iron Blade: Monster Hunter RPG, and Asphalt 8: Airborne will put the device to its knees. The phone heats up during prolonged gaming sessions but not to dangerous levels or even to the point of making your hands sweat. 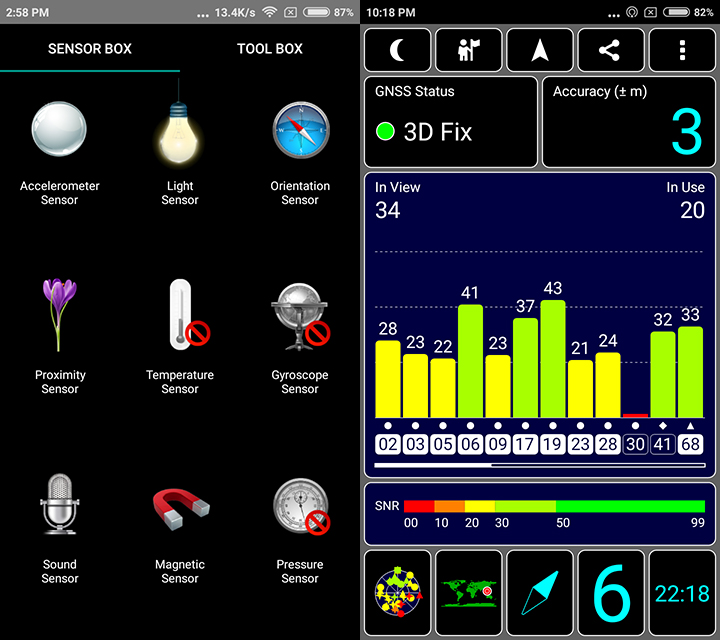 The Redmi 5A is equipped with your basic connectivity features such as Bluetooth, WiFi, GPS, and even an IR blaster. Call quality is crisp and clear and signal reception is not a problem, as long as you are in a serviceable area. GPS is accurate and works fine in apps like Waze, Google Maps, Grab, and Uber. 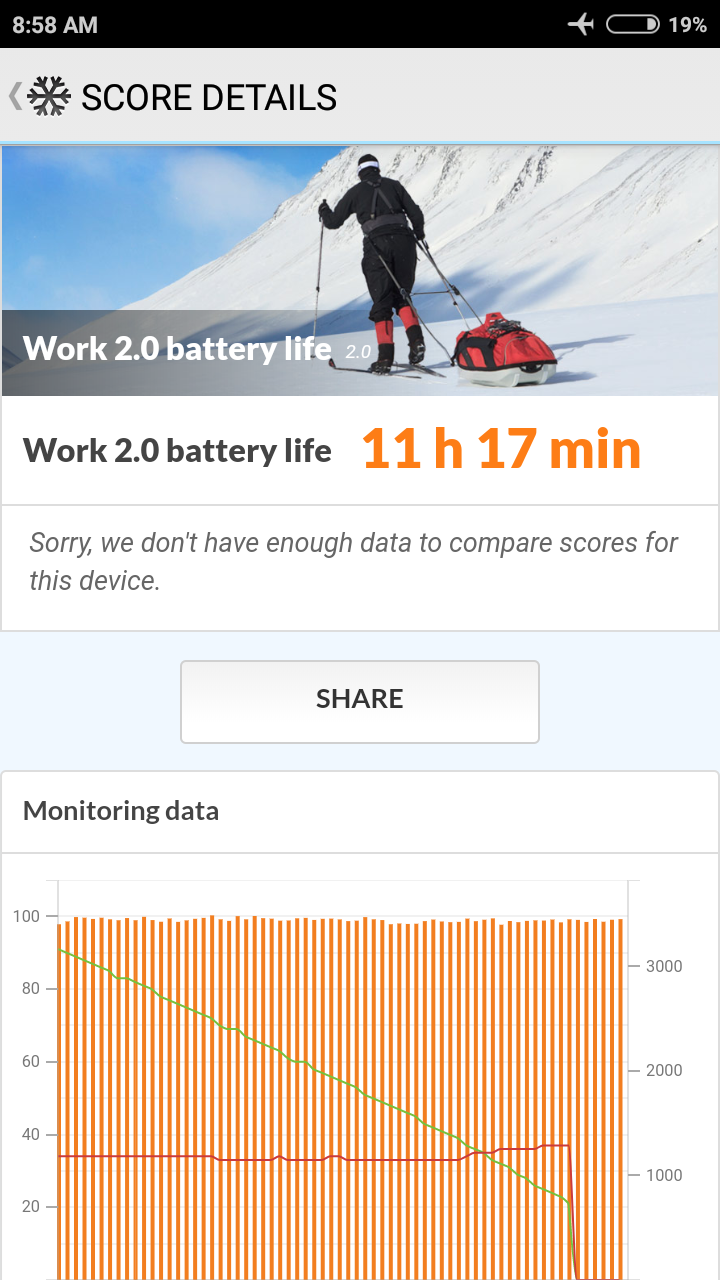 The Redmi 5A is equipped with a standard 3,000mAh battery. It’s nothing too impressive but is enough to last you a day or a day and a half on light to moderate usage. PC Mark battery test ranks the device at 11 Hours and 17 mins while in our video loop test (Playing a 1080p video on loop in Airplane mode with 50% brightness and volume with earphones plugged in) it lasted a good 14 Hours and 12 mins. Charging, on the other hand, is surprisingly slow as it took almost 3 hours for the phone to go from 0-100%. 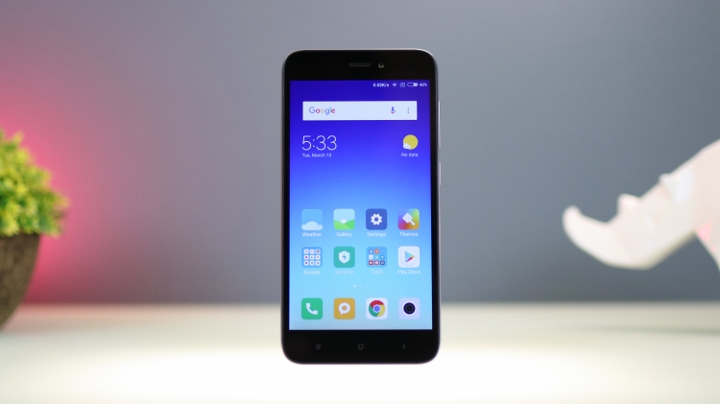 Once again, Xiaomi proved that they have what it takes to produce a performer even at the entry-level category. So, is the Redmi 5A the entry-level smartphone king? Well, in some regards, yes but it does lose its crown in one aspect. Performance-wise, the Redmi 5A is, without a doubt, one of the best in its category. It also has an excellent display, a plethora of useful shortcuts and features, and a decent performing battery. Unfortunately, the king will have to give up its crown when it comes to camera performance as it falls short in that regard. 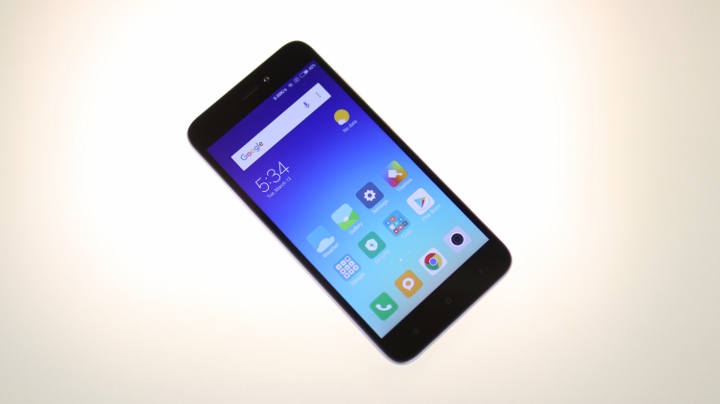 For the price Php4,590, the only other competitor that can go toe-to-toe with the Redmi 5A’s performance is its predecessor, the Redmi 4A, which is equipped with almost the same specs. In other key aspects such as camera and battery, the so-called “entry-level-king” will meet fierce competition.