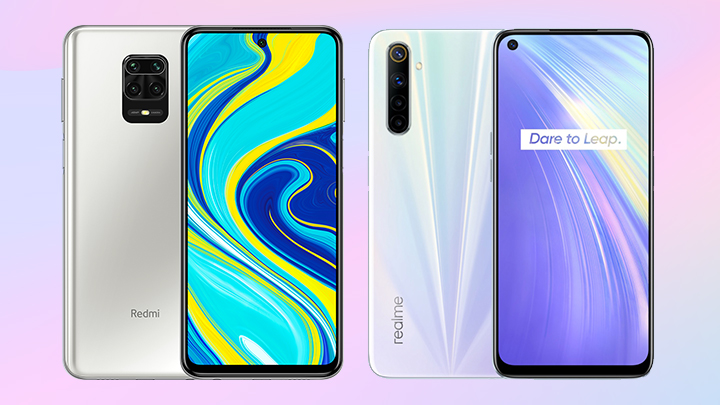 For starters, the Redmi Note 9 Pro has a slight edge against the Realme 6 when it comes to the display size; the former has a 6.67-inch panel, while the latter has a slightly smaller screen measuring at 6.5-inches. However, the Realme 6′ display operates at a faster refresh rate at 90Hz compared to the Redmi Note 9 Pro’s 60Hz refresh rate. Both devices have an FHD+ resolution at 2400 x 1080 pixels. The two devices also have pretty slim side bezels, except for the chin.

Additionally, both the Note 9 Pro and Realme 6 have hole-punch front cameras, but they differ in placement. The Note 9 Pro has it on the top center of the display, while the Realme 6 fixed it on the upper left corner of the screen. Both Redmi and Realme have equipped their latest smartphones with Corning Gorilla Glass protection.

Under the hood, the Note 9 Pro is armed with a Snapdragon 720G chipset, while the Realme 6 is equipped with an Helio G90T processor. Both chipsets are midrange gaming chipsets; the Snapdragon 720G is a reasonably new processor, while the G90T is about a year old. Despite the difference between them, the two chipsets are reasonably competent and sit on the higher end of the midrange spectrum.

Paired up with the Snapdragon 720G chipset on the Note 9 Pro is either 4GB or 6GB LPDDR4x RAM, along with either 64GB or 128GB UFS 2.1 storage. On the other hand, the Realme 6 accompanied its Helio G90T chipset with 4GB, 6GB, 8GB LPDDR4x RAM and 64GB/128GB UFS 2.1 storage. Users can expand the storage on both devices, and it’s a delight that the two handsets have dedicated micro SD card slots. The Note 9 Pro can be pushed further up to 512GB, while Realme hasn’t specified how much expandable storage its device can have.

Camera-wise, the smartphones both have a quad setup situated on the rear. The Note 9 Pro sports a 48MP primary, 8MP ultrawide, 6MP macro, and a 2MP depth shooter, all placed inside a rectangle-shaped module, located on the top center of the device. As for the Realme 6, it comes with a 64MP primary, 8MP ultrawide, 2MP portrait, and 2MP macro snappers, lined up vertically on the upper left corner of the smartphone.

As mentioned earlier, both the Note 9 Pro and Realme 6 have a pinhole module for their front cameras, and both devices have a 16MP snapper. If we’re judging by numbers, the Realme 6 trumps with its higher primary rear camera, while the Note 9 Pro wins in the macro lens battle with its 5MP sensor. As we usually say, higher numbers don’t necessarily translate to better quality, and we’d have to see the images produced by the devices side-by-side to judge that.

The devices share similarities when it comes to smartphone features. Both the Note 9 Pro and Realme 6 have a 3.5mm audio jack, a side-mounted fingerprint scanner, and a USB Type-C port. They also both run on Android 10 but have their own skins over the system; the Note 9 Pro has MIUI 11, while the Realme 6 has Realme UI.

The prices of the two devices are somewhat similar; both have the same price for their base models, while their highest configurations also share the same cost. Although it should be noted that the Note 9 Pro only has two variants, while the Realme 6 has three configurations, and its middle option is the same configuration as the Note 9 Pro’s highest one. Do take note that we’re basing the prices off the Indian launch of the devices; if ever the Redmi Note 9 Pro and Realme 6 get released in the Philippines, their local prices may vary and may not be close or similar to the Indian counterparts.

We’ve detailed out which aspects each smartphone has the upper hand. Now, between the Redmi Note 9 Pro and Realme 6, which device would you pick? Share it with us in the comments!