ZTE gets 472 complaints with DTI over Sale Fiasco

The Department of Trade and Industry (DTI) received a total of 472 complaints against ZTE (and/or its local distributor MSI-ECS) involving the ZTE handset sale that happened last October.

This is a according to a source close to someone inside the department. This is perhaps one of the most number of complaints ever recorded, almost in the same level as our local telcos get every quarter. 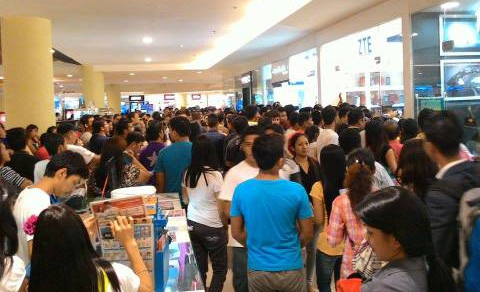 The fiasco stemmed from the failure of the sale of handsets where thousands lined up and only about 300 were actually available (half of which were either hoarded by resellers or employees).

ZTE (MSI-ECS) eventually apologized about the event and their shortcomings but that did not stop frustrated customers from filing a complaint to the DTI.

With the number of complaints filed, we think the company might be blacklisted from doing promos any time soon.

You can read more about the ZTE event below:

When android was quite new- LG made a similar chaotic sale but that was for P10k I remember. And I did line in Megamall for it

yeap, meron din naman. just an example-we bought a Skyworth TV just a few months ago at SM Appliance Center. When we were about to install the tv at home, we found out that the screen was damaged. SM refused to acknowledge their mistake and they told us that they cannot do anything about it. So we lodged a complaint with the DTI and within a couple of days after filing the complaint, the DTI arbitrator issued “subpoena” to the concerned employees of SM appliance center and to the representatives of Skyworth. Within a few hours, na-settle naman na yung case. (Lesson learned here: “wag bumili ng Skyworth na TV.”

The thing is, people should learn how to assert their rights under the law. Kasi kung reklamo ka lang ng reklamo pero wala ka namang ginagawa, walang mangyayari sa iyo. So I salute those individuals who filed their complaint against the ZTE.

Game Over Dood! But this might happen to PLDT Home FIBR if they use way too much collateral (like Broken Promises & Reassurances)…….

Yes, we also lined up for the sale and was not able to get one.

Well even if yugatech is part of promoting or advertising the said even, I think naman they cannot be blame kasi as advertiser, you just desiminate the info they got from the client…yet no knowledge about what it can happen in the event.

and if yugatech is not advertiser, they just share local tech info, events, etc. that will happen.

Weh Di Nga? – you and eman were among the ones who made the claim first. Pics or didn’t happen, either. Unless you don’t want people to take either of you trolls seriously.