Laptop or Desktop: Which one is better?

Laptop or Desktop: Which one is better?

As a prospective buyer of a new computer, one of the first things you need to decide on is whether you’re getting a laptop or desktop. It’s an age-old question that can lead us down deep internet rabbit holes, riddled with countless Chrome tabs worth of research. 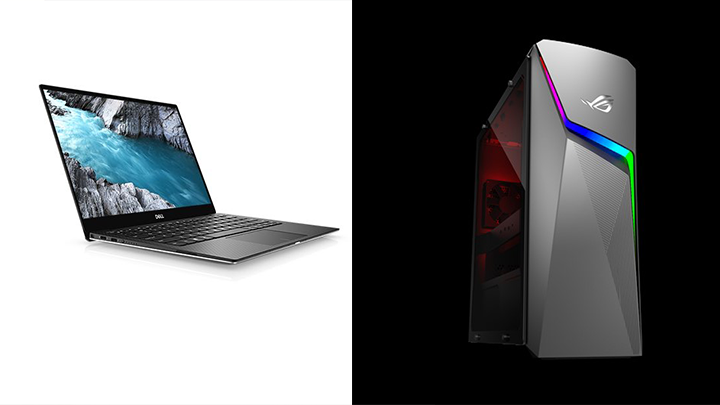 Reaching a final decision on the matter is easier said than done, as several factors are at play. The best thing we can do is organize and simplify the thought process, so we will do exactly that.

The differences between laptops & desktops

Let’s start by outlining the major factors that will influence your purchasing decisions, and which type of computer has an advantage in that particular department.

Performance Potential — Desktop
This one is almost a no-brainer since even the most powerful gaming laptops in the market use the less-performing “mobile” versions of their desktop counterparts. This includes the CPU, GPU, and RAM.

These components make up a bulk of a computer’s performance, and the full-on desktop options are able to be (literally) bigger and faster thanks to the superior thermal performance a desktop can provide. Desktop CPUs and GPUs have large dedicated coolers that allow them to be clocked much higher, providing much more performance.

Apart from a few heatsinks and fans, not much else cooling can be fit in the relatively small chassis of a typical laptop, but that makes a nice segue into the next category.

Portability — Laptop
Just like the last category, this one is definitely a no-brainer. Laptops are way smaller and lighter than desktops, allowing you to carry them anywhere. If portability is an important factor to you, then your decision process actually ends here.

But even if you could manage to pack a small desktop and all its peripherals into a backpack like some people have done, laptops also have batteries that allow you to use them untethered to a power source.

Ease of use — Laptop
This category also goes to laptops due to the setup process. Let’s say you bought a brand new laptop from a shop in the mall. Right after handing over your cash, you could head straight to the food court or coffee shop and immediately start using it if you wanted to.

As for a desktop, you would still have to go home and set it up on a desk — that is, if you bought a pre-built. If you’re going the DIY route, then you’d also have to assemble the thing, as well as install the OS and all the software yourself.

Display and Multimedia — Laptop
You might be thinking that desktops should hold the advantage for this category since you can upgrade your monitor at any time, and a laptop is stuck with its built-in display. But the latter isn’t entirely true. You can just as easily connect an external monitor to a laptop via HDMI, Thunderbolt, or VGA for older models. Also, consider that you would need a laptop if you wanted to connect to a projector for a presentation at school or work.

The same applies for audio — laptops have built-in speakers that in some cases, are actually really good. And if you wanted something better, you can just as easily hook it up to another audio device.

Input Devices — Desktop
The argument can be made that the same logic from the display category can be used here — you can easily hook up a different keyboard and mouse to a laptop. But for this category, I’m strictly comparing dedicated keyboards and mice to the built-in keyboards and trackpads of laptops.

A good dedicated keyboard will be more ergonomically sound and have more features than a laptop’s keyboard. And unless we’re talking about a Macbook, the typical laptop trackpad is generally less efficient and comfortable than a good dedicated mouse.

Upgrade Potential — Desktop
Even with a pre-built desktop, you will be able to upgrade all the major components that dictate a system’s performance; the CPU, graphics card, RAM, and drives. With a desktop that you built yourself, anything and everything can be swapped out for something better.

With a laptop, at most, all you can upgrade is the RAM and drives. This is because the components on a laptop are soldered onto the motherboard therefore can’t be upgraded. Of course, there are laptops like the Alienware Area 51m that have an upgradeable CPU and GPU, but this is a rare exception.

Plus, aside from upgrading to better components, you can have more of certain components in a desktop, such as RAM sticks and drives. Laptops typically only have two RAM slots, assuming the RAM isn’t soldered on. Desktop motherboards can have up to eight. Same thing applies to drives, whether that’s m.2, 2.5”, or 3.5” — the latter of which isn’t even possible on a laptop.

Personalization — Desktop
This point definitely goes to desktops, especially if you’re building your own. You can really dial in the sort of look you want by mixing and matching the components you’re gonna use in your build.

The biggest aspect of this is the case/chassis. You can choose from a huge variety of shapes and sizes. With a laptop, what you buy is what you get.

Power Consumption — Laptop
We can’t really say what the “typical” power consumption of a desktop PC is, since there is no such thing as a typical desktop, they’re all different. But it’s certainly more than a laptop would consume.

A gaming PC under full load can easily consume a few hundred watts of energy, while a laptop’s DC charger generally won’t consume more than 90 watts. Also consider that a laptop won’t be plugged in all the time, as it does have a battery.

Risk of Theft & Damage — Desktop
Given that you will be sometimes using it outside your own home, a laptop is 100% more at risk of theft than a desktop. And even if you only used it at home, a laptop is much more enticing for a burglar to steal due to its relatively smaller size.

The same thing goes when it comes to the risk of damage. Since a laptop is meant to be brought with you on-the-go, the possibility of banging it on something or dropping it is there. Every single part of it will also come into contact with something — in contrast, with a desktop, all you need to touch on a daily basis are the power button, USB ports, keyboard, and mouse.

Repair — Desktop
When you encounter any sort of hardware failure with a desktop, you can typically only replace the component causing the problem. Even better, you could probably just buy a new part and replace it yourself.

When it comes to laptop repair, replacement components other than RAM or drives aren’t off-the-shelf. And even if you could get replacements, good luck installing them yourself if you don’t have all the fancy torx screwdrivers, soldering equipment, and a cleanroom. In most cases, you will need to bring it to a service center, and it will probably cost you a lot.

Price-to-performance — Desktop
When it comes to this category, there’s just no competition. Having a lot of performance capability and features in a relatively small and portable form factor definitely comes at a premium, which gives laptops a higher price-to-performance ratio compared to desktops.

While you could easily spend way over PHP100k for the ultimate gaming desktop PC, spending the same amount of money for a laptop won’t get you nearly the same level of performance.

And even if you did have a desktop that was less powerful than top-tier gaming laptops, the upgradeability factor certainly makes up for this. Nothing is stopping you from upgrading your components down the line to reach the level of performance you want — something you can’t really do with a laptop unless all we’re talking about is a new SSD or more RAM (assuming it isn’t soldered on in the first place!)

After taking a look at all the factors at play between laptops and desktops, we can already say which one is better. In terms of portability, user-friendliness, and power efficiency, laptops win. For everything else, desktops all the way. Now to answer the question of which one you should get, another question needs to be answered first — who are you?

What do you do?
What are you gonna be doing on your computer?
How much money and/or time are you willing to spend for it?

That wraps it up for this guide on the differences between laptops and desktops. We hope it made your decision-making process even just a little bit easier.