Why Your Telco Needs to Cap Your Mobile Internet

This year, we see both telcos started admitting that there needs to be a cap on our mobile internet. Globe is sunsetting SuperSurf into GoSurf while Smart has recently introduced All-Month Surfing.

Both mobile data plans have a soft cap (Globe has 5GB and 10GB while Smart has 3.5GB, 8GB, 10GB and 18GB), something we’ve only experienced this year. This is one reason why the Department of Justice has published an advisory against the practice of throttling and data caps.

The original reason behind the imposition of data caps is network congestion. Well, we now know that it if subscribers pay more, they are given mo data allocation which debunks the idea that it’s merely congestion. 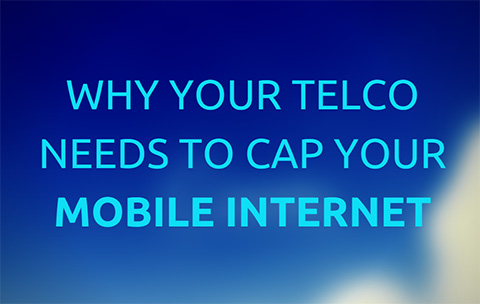 The real and more logical reason — business growth. If you read the recent investor reports of PLDT and Globe, you will notice that their year-on-year revenues are either flat or declining. If you look closer, the revenues from SMS and voice calls are the ones that went down significantly while revenue from data/internet is growing.

The shift in business growth is expected as more and more Filipinos are becoming connected (35% internet penetration this year) to the internet while smartphone penetration has grown to 15% with 30% adoption on new purchases.

The trade-off in services, SMS and voice shifting to data-based communication, poses a problem. So, we followed the money-trail and investigated. Here’s why:

1) Data services (mobile internet) is supposed to be a new product line. It’s even classified as VAS (value-added service) and supposed to augment the existing revenue streams coming from SMS, voice calls and fixed line.

2) Messaging Apps are eating into the SMS and voice usage of active subscribers. This cannibalization of existing services reduces its year-on-year growth as more and more people use the internet. While telcos earn more from data subscription, they are losing money from reduced usage of voice and SMS.

3) The risk in this shift in subscriber behavior is that loses in SMS and voice might be bigger than the gains in the data front. As such, as more and more people use data, there’s a net negative effect on revenue growth.

4) To compensate for this cannibalization, telcos need to push data services so that the growth in that service will compensate in decline of core services.

5) However, providing “unlimited” data services will mean that revenue potential from that service will eventually hit a ceiling. That ceiling used to be Php999 a month per subscriber.

In theory, once all subscribers are paying that amount for unlimited data, there’s no more room for growth. What used to be multiple revenue streams will not be just be from one single source (e.g. Php800 from voice, Php500 from SMS and Php999 from data will become just Php999 from data since it can carry voice and SMS for free).

6) As a business owner, that is a scary future. Once the market is saturated, there will be no more room for growth. The idea that “as subscribers consume more, they pay more” in the era of voice and SMS will not hold true once they shift to data.

7) As the business owner, what do you do? Don’t offer unlimited mobile data. Keep the old model of voice and SMS — pay more if you use more.

That’s the reason why your fixed line internet (DSL) doesn’t really pose a huge threat compared to mobile internet, thus, the idea of capping DSL isn’t on the table. It’s the smartphone users that are changing their consumption behavior.

Since telcos are publicly listed companies, they need to perform well or else investor confidence goes down, share value goes down and market capitalization shrinks. Now that’s a scary thought. The sooner we realize that as subscribers, the sooner we understand that it’s where this business is heading.

So yes, it’s all about the money.

From the business perspective, the revenue model for VAS (specifically mobile internet) needs to be changed in order to survive and continue the uphill growth.

As consumers, what we can do is (a) not give them your money and/or (b) lobby for better legislation on net neutrality.

I like that you shared with us that telcos recognized the need for the mobile internet to have a cap like a soft cap that both Globe and Smart have. As I am not really a tech-savvy character that idea is something that will take time for me to absorb fully. However, if that is the case, then all the internet service providers must provide a cap or have a cap as a matter of compliance as well because more and more are becoming connected to the internet.

If there’s something us consumers should complain about, it’s the false advertisements that Smart and Globe continuously doing. There’s no such thing as “unlimited” in mobile internet world, Globe and especially Smart should stop telling that to people because most of us don’t spend time researching about the product before we buy.

Hehehe, They knew they had the wrong moves…
Now they LEARN…

NTC and DTI (You should be the one to protect us)? who should win?

Them or the consumers?

There is NO NETWORK CONGESTION. If the internet is truly congested, every form of accessing the net will be very slow.

Globe and Smart are capping data because they are only “renting” from PLDT to use the internet. Smart only capped their data recently so as not to attract attention (say MVP, Smart, and PLDT in a sentence).

I DONT CARE WHAT THE REASON IS ON CAPPING,JUST GIVE US WHAT WE WANT, INVENT SOMETHING, FIND A WAY TO GIVE US THE UNLIMITED INTERNET YOU ADVESTISED. DAPAT SABIHIN NYO “UNLI UNTIL THIS OR THAT” OR JUST SAY LIMITED INTERNET OR UNLI (THEORETICALLY).