Apple iOS 7 update now out and ready for download

Apple finally released their latest major OS update , the iOS 7. The release represents the most significant cosmetic revamp iOS ever has since the iPhone was introduced in 2007.

We rummaged thru our storage to get a hand on an iPhone 5 and run the update very early this morning. The update is supposed to be 752MB (which is already huge) but you will need an extra space of at least 3.1GB in order to install it. 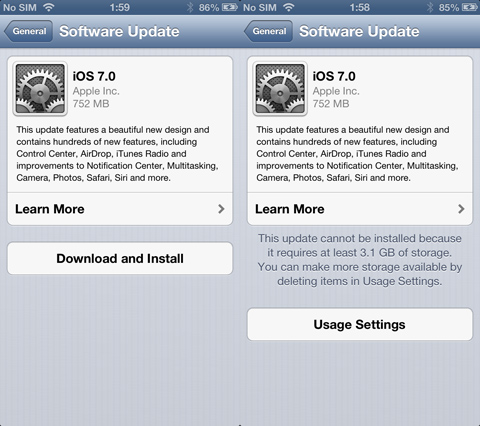 There were reports that a lot of people are getting error results while downloading the update which prompted them to repeat the process for dozens of time (were were lucky we only did it after 2 tries). If you get lucky, the download will take about 15-20 minutes and another 15 minutes to install it.

To update, in your iOS devices, just go to Settings -> General and select Software Update.

Check out our initial comments about iOS 7 here.