Xiaomi has officially unveiled its latest mid-range smartphone in India, packing a 6.67-inch screen, Snapdragon 720G chipset, quad-rear cameras, and a large battery. There’s another newly announced smartphone that sports almost the same specs, the Realme 6 Pro. Which one looks better on paper? Find out in this quick specs comparison below. 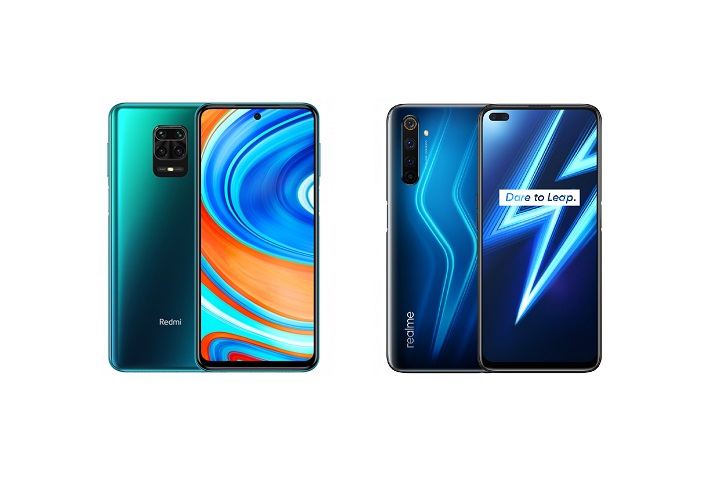 The two devices are pretty much identical in display size and resolution. However, the Realme 6 Pro has the advantage of having a 90Hz refresh rate for some smooth animation and transitions. It’s a feature that is normally found in flagship devices, so having this for a mid-range device is a big thing.

Both the Redmi Note 9 Pro Max and Realme 6 Pro have quad-rear cameras with 64MP primary cameras and 8MP ultra-wide lenses. The latter has the advantage of having a higher resolution for the macro camera and a 2MP camera for depth-sensing. The latter, on the other hand, has a 12MP telephoto lens. Depending on your needs, if it’s zoom capabilities or better bokeh effects, both are winners.

Things are different for selfies. The Redmi Note 9 Pro Max wins in terms of resolution, the Realme 6 Pro wins in versatility, having an 8MP ultra-wide for more effortless group selfies.

We can’t comment on quality, though, but we’ll compare the cameras on these two once we have both devices for review.

The Redmi Note 9 Pro Max automatically wins in this round for having 720mAh more capacity and 3W more fast charging capability than the Realme 6 Pro. However, we can’t comment yet on battery life, but we’ll know once we have both devices for review.

Both are powered by Qualcomm Snapdragon 720G chipset, up to 8GB of RAM, up to 128GB UFS 2.1, and Android 10. Given the almost similar specs, we can expect excellent performance on both devices. The user interfaces are different, of course, but we’ll let you be the judge on which one is better — MIUI 11 or Realme UI.

Both devices were launched in India first so we can compare their price tags. As you can see above, the Redmi Note 9 Pro Max has cheaper offerings compared to the Realme 6 Pro for the 6GB + 64GB and 6GB + 128GB models. They’re tied though when it comes to the 8GB + 128GB model. However, things could be different when these devices launch in the Philippines, so stay tuned for that.

Given the pros and cons mentioned above, which one will you get, the Redmi Note 9 Pro Max or the Realme 6 Pro? Let us know in the comments below.