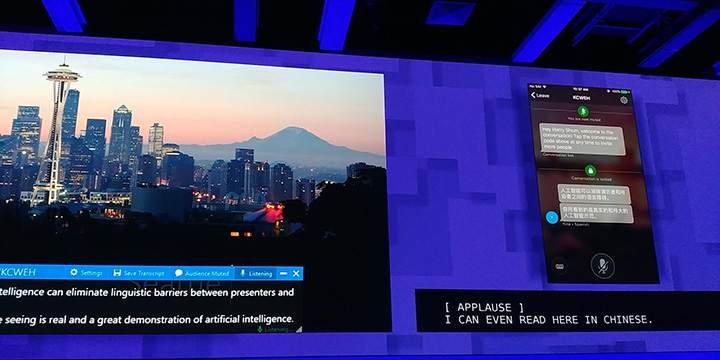 The translator can provide real-time translation for subtitles as well as translate the entire contents of the presentation. It supports 10 spoken (Arabic, Chinese, English, French, German, Italian, Japanese, Portuguese, Russian and Spanish) and 60 written languages. During the live demo, the presenter was speaking in Spanish while it is being translated into English in real-time. At the same time, the mobile Translation app was configured to translate the speech from Spanish to Chinese.

Since this feature is bi-directional, the presenter can allow the audience to chime in and ask questions. In the demo, Harry Shum talked back in Chinese and this was automatically translated into English in the presentation subtitles. With this setup, any person can actually present to an audience with up to 60 different languages all at the same time.

Presentation Translator is powered by Microsoft Translator live which is a Microsoft Office add-in for PowerPoint. The plug-in is still on invite-only but you can sign up here to be invited.