Along with the Lumia 720, Nokia Philippines also let us loan the DT-910 or commonly known as the Wireless Charging Stand. Check out our short preview after the break. 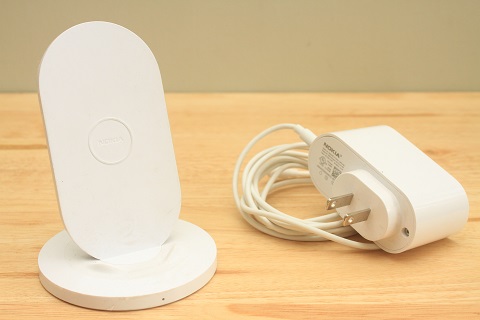 The Nokia DT-910 is an add-on accessory that you can purchase on top of your wireless-charging-compatible Lumia handset. In case you’re wondering which Lumia phones are compatible with the wireless charger, here’s the shortlist.

Majority of the accessory is crafted out of plastic which is then coated with two different material; rubber matte and gloss. The former is the texture of the front and surrounding portion of the charger’s cradle while the back of the cradle as well as the other parts are glossy. Nokia went for a simple design approach with the DT-910. The circular bottom portion of the charger provides a sturdy base for the cradle while the cradle is slightly angled to support a phone when being charged.

There’s an LED notification light at bottom with an NFC logo above it. On the other hand, the charging port is located on the opposite side of the device.

Using the device is fairly simple; once the Wireless Charger is plugged in to a power source, all the user has to do is place the phone vertically to the cradle. Once the DT-910 detects the handset, the LED light will flash signaling that the device is being charged.

As an add-on feature, the DT-910 can also be set to display certain apps or content to the paired smartphone using NFC. By default, the phone will display the current time and weather, but this can altered inside “Settings” of the phone.

Just to show how this works, we’ve prepared a short video demo:

Wireless charging is, without a doubt, an interesting proposition both in the usage and technological standpoint. However, we don’t think that its current sticker price, which is pegged at US$99 a pop, isn’t too encouraging for the majority of Lumia users to buy this in a heartbeat.

Having said that, we feel that the question that needs to be asked is not whether you should or shouldn’t buy it, but whether or not you’re willing to shell out a little over four grand for a fancy charger with NFC. Your thoughts?