There are laptops, tablets and phones coming in different sizes. Asus is known for combining these form factors into a single device — like the Transformer Pad and their Windows 8 Hybrids. Asus is the first to combine a smartphone, a tablet and a keyboard with the PadFone. Read on to know more in our full review of the Asus Padfone after the break. 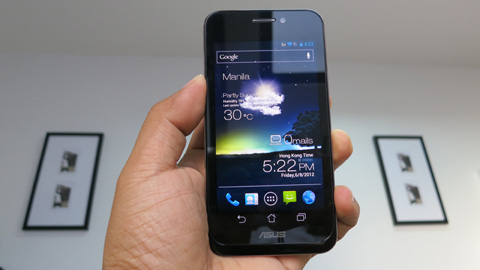 The Asus Padfone has been released in certain regions but did not arrive in the Philippines. The unit that we got was bought from Taiwan during the recent Computex 2012 in Taipei back in June.

The phone features an all-glass front with a small plastic bezel below that adds some character to the device. There’s a front facing camera and an earpiece on the upper part while no buttons can be found below, only the Asus logo. 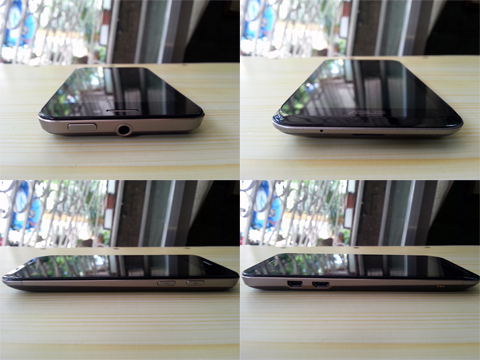 A metal surrounds the phone which adds class and makes the phone appear thinner than it is. On the left side, the device features a micro-USB and a micro HDMI port, while the volume buttons can be found on the right side. On the top part of the phone, the power button can be found along with the 3.5 mm audio jack. All the buttons felt very tactile and responsive though the volume controls may be hard to identify at times. 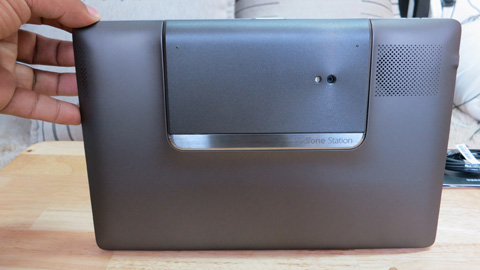 On the back side of the device, there is an 8 megapixel camera with LED flash and the speaker. The back cover is made out of a texturized plastic with a circular pattern (similar to Asus’ other devices). It looks beautiful by all means but the texture makes the phone feel unnatural and weird. It may even get slippery at times.

The PadFone features a 4.3″ Super AMOLED Display with a qHD resolution of 540 x 960. By today’s high-end standards, a qHD display may seem lacking but it isn’t that noticeable even if it uses Pentile technology. Individual pixels won’t show up unless you look for it at very close distances. 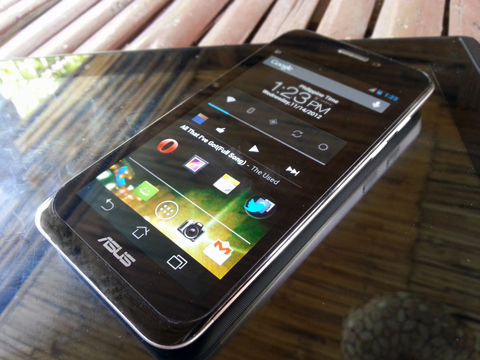 Colors pop out and the blacks are truly deep. It’s saturated to a certain level and washed out colors will never be a problem. We find the use of Super AMOLED ideal because of the use of on-screen buttons. Because of that, we get the impression that the display is larger than it is.

Even with our impressions of the large size, the screen is very manageable. One handed operation can be done with very little hassle.

The PadFone runs on Android 4.0.4 Ice Cream Sandwich. The device shows a perfect example of how Android merges Gingerbread and Honeycomb through a single device with varying user interfaces. To accomplish that however, Asus used a barely skinned version of Android.

The skin makes the device feel a lot like the Galaxy Nexus, especially with the stock-like build and the on-screen buttons. This isn’t a downside however. In fact, we find stock Android to be very appealing and smoother in operation compared to other skinned versions. 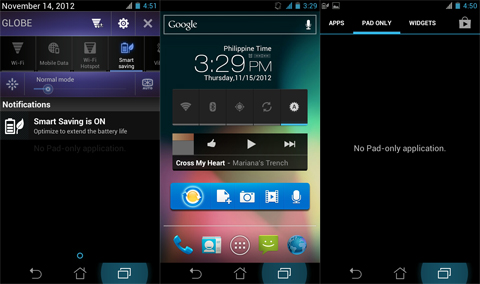 Asus has added its signatures to the system including widgets and some cloud-based apps. This includes MyCloud, MyLibrary, WebStorage, SuperNote and more. Some of the bundled apps may be of use, like SuperNote for example, but we didn’t even consider using Asus’ service apps as there are better alternatives out there.

The same goes with the widgets. A lot of them are very functional and beautiful to look at, but some of them will be probably not of use because of the alternatives that exist on the Play Store. It’s not a very big problem, but to some users, it may be considered as bloat.

If you want to engage in rooting and ROM flashing, the PadFone might make things complicated as it’s not that simple to root when your phone runs Android 4.0.4. On the other hand, there aren’t much launchers and home replacement apps that can run smoothly on the PadFone because of the tablet-docking option. Launchers can become buggy while transitioning from tablet to phone UIs and vice versa.

Video playback on the PadFone is a joy. Sure, it cannot outmatch the other Androids that pack larger screens, but pop it in the PadFone station and you’re good to go.

Even without the station, the on-screen buttons will go into hiding anyway and the PadFone will offer smooth full-screen playback. If none of those options are acceptable, a micro HDMI port is also available. 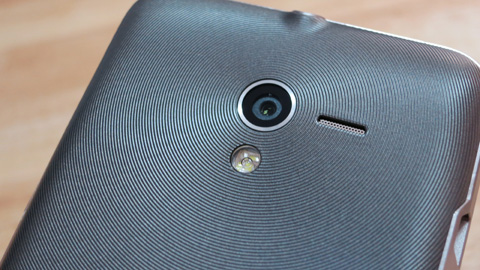 We find the speaker on the PadFone very weak. It’s acceptable but it is surely outclassed by most of the phones in the market. Sound quality sounds full of treble and lacks in bass. It won’t be a problem when you have the tablet dock however, since it surely enhances all things multimedia. The PadFone features a front facing .3 megapixel camera and a rear 8 megapixel camera capable of 1080p video recording. The main camera takes excellent shots in proper lighting; it shows off details with proper depth depending on the focus. Sadly, it fails on low-light situations as it generates a lot of noise and distorting lights but even so, it is still beyond acceptable. When it comes to video recording, it is sure to be pleasing. The PadFone takes sharp 1080p video with proper focus and continues to do so in low-light. The device also allows you to take still shots while taking video, which is a nice addition. However, frame rates may drop which will cause the video to stutter.

The camera interface is easy to learn and control, however the options can be hard to find within the phone interface; it can be exposed with a swipe from the very side of the zoom controls.

The PadFone’s performance was smooth and fast. It never lagged the whole time that we were handling the device, except for the moment when uTorrent was running in the background. We couldn’t identify if that was the app’s problem or if the phone couldn’t handle it. When docked on the tablet however, it feels slower – almost as slow as the first Android tablets that came out on the market. 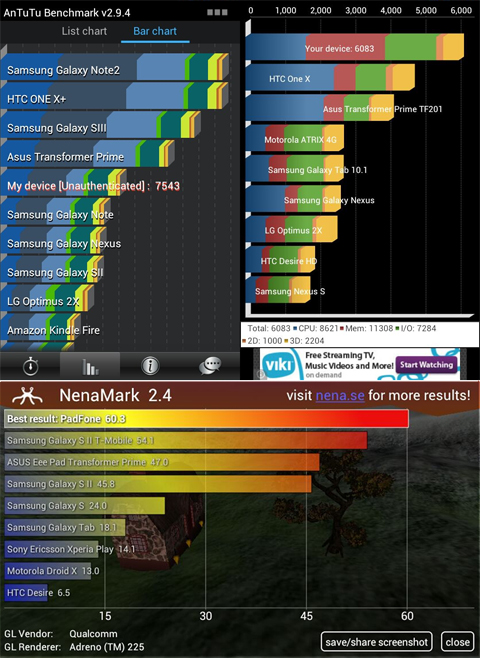 On Antutu Benchmark, the PadFone got a great score of 7,543 among the dual-core handsets. It also got amazing scores on Quadrant and Nenamark 2, 6,083 and 60.3 respectively.

It wouldn’t be called a PadFone without being a pad, would it? As you’d expect, functionality comes at a cost. In this case, it’s the weight. The PadFone Station is already heavy alone. Just by adding the PadFone to it makes it feel like two tablets – and that is very heavy. Additional to that, the thickness of the tablet is quite cumbersome, especially with the hump generated for the phone’s placement. 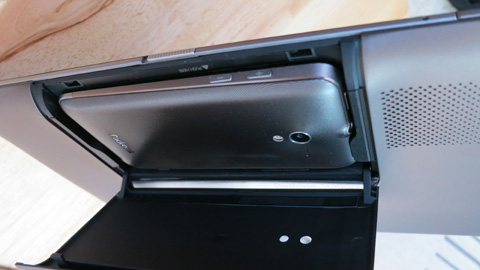 The rubbery feel on the back feels good to the touch though. We would actually prefer it over the PadFone’s actual back cover. The Station doesn’t feature much ports and buttons other than the power and volume buttons.

The tablet enhances your multimedia experiences with its bigger screen and stronger speakers. Colors look vibrant and text looks readable (pixels may be visible when you closely inspect the screen). Also, the tablet dock has a battery of its own and it charges the phone once docked. It won’t work alone though; it needs the phone to power it up. Asus also provides a capacitive stylus with Bluetooth connectivity. What it does is it creates a more convenient way of using your phone even when inside the tablet dock. It features an earpiece and a volume rocker. It also charges through a micro-USB port. Sure, it looks awkward talking to a pen, but it’s definitely better than having to hold up a tablet to your ear.

There is also a place for a physical keyboard, which we didn’t get to try, but it’s surely almost similar to the ones found on the Transformers. It’s a good thing to have as an option, but think about it, the tablet alone is already heavy enough. Bringing more than that can bring more functionality but then again, that comes at a higher price – maybe the ache of your muscles or something like that.

Call quality was definitely good but we experienced some weird echoes and muffled tones. Also, the system tells us that the WiFi’s signal is poor even when it’s not – then it disconnects and reconnects later on.

On the other hand, the Bluetooth Stylus’ earpiece isn’t as good as the phone’s. It may be acceptable but we’d still recommend the use of the phone itself.

Battery life depends on how you use your phone. Brightness strongly affects it, especially when a lot of whites are displayed on the screen. With moderate use, you’ll get through a day but with the PadFone station and the keyboard dock, expect it to survive for 2 days at least.

Asus makes good innovations and products, but this one feels very premature. Individually, they are great products but when you put everything together, it isn’t as ideal as it seems.

The device shows what could happen when you cramp a netbook, a tablet and a phone into a single device. The app transitions and compatibilities obviously lack. It’s a great phone, don’t misconstrue, but it isn’t the all-around device we are all waiting for. We would still recommend buying separate phones, tablets and laptops over the PadFone. 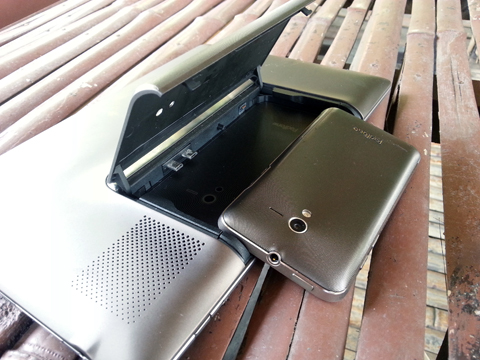 Anyway, Asus seems to have learned a lot over the PadFone and this surely isn’t the last time we’ll be seeing its kind. Asus is already preparing the sequel but we’d have to wait for that one to find out if it’s going to be worth it.

The PadFone is a good idea; it just needs to be executed in a better way. We’re hoping the upcoming Padfone 2 will address all that.

An Asus service center guy told me they won’t be releasing the Padfone 2 here. Is this true? =(

@AAA – we just pre-ordered the Asus Padfone 2. It should arrive in December so we can review it as well.

Note to Android manufacturers: the sweet spots for any smartphone or tablet are 2gb RAM, microSD card slot and TIMELY Android OS upgrades. If you offer some extras the better but these features are a must if you want our loyalty to your brand.

a late but awesome review, now on to the Padfone 2