Infinix has released two new smartphones in the country – the Zero 4 and the Zero 4 Plus. The latter, which we have for review, is the most powerful of the two, packing a premium build, 5.98-inch display, 20.7MP camera, Helio X20 deca-core CPU, 4GB RAM, and large 4,000mAh battery. For under Php16K, is the Infinix Zero 4 Plus one of the best phablets in this price range? Find out in our review. 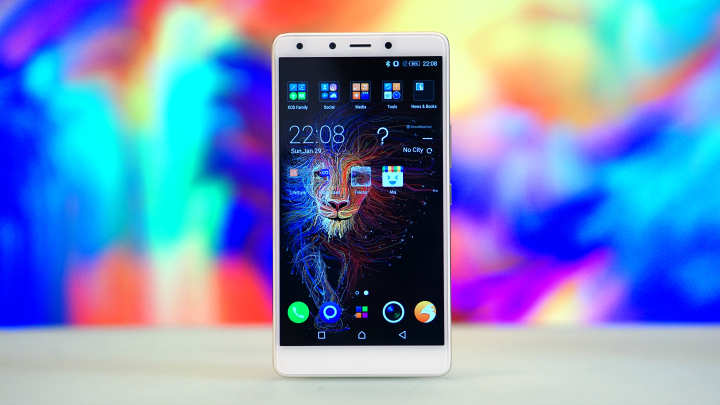 Right off the bat, the Zero 4 Plus’s stand-out feature is its premium build. It has a metal unibody chassis that is sturdy and cool to the touch. The edges are chamfered that smoothly aligns with the bezel and 2.5D curved Gorilla Glass 4. The bottom sides, on the other hand, are tapered, which make it feel thinner when gripped. 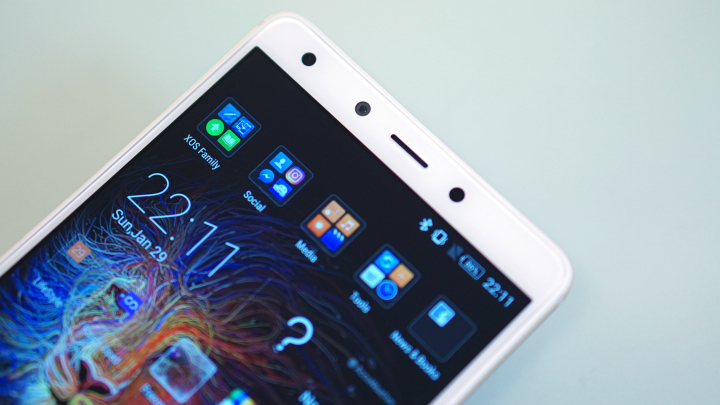 On the front, we have the 5.98-inch display. Above it are the receiver, 13MP front camera with LED flash, notifications light, and sensors. The bottom part is devoid of any capacitive buttons as it uses on-screen navigation keys. On the right are the metallic volume and power/lock buttons. They’re conveniently placed towards the middle for better reachability. 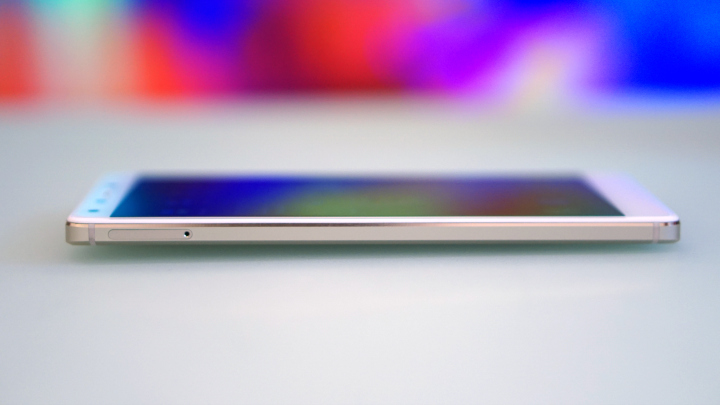 On the left is the hybrid tray which accepts two SIM cards (micro + nano) or a microSD card at the sacrifice of one SIM slot. 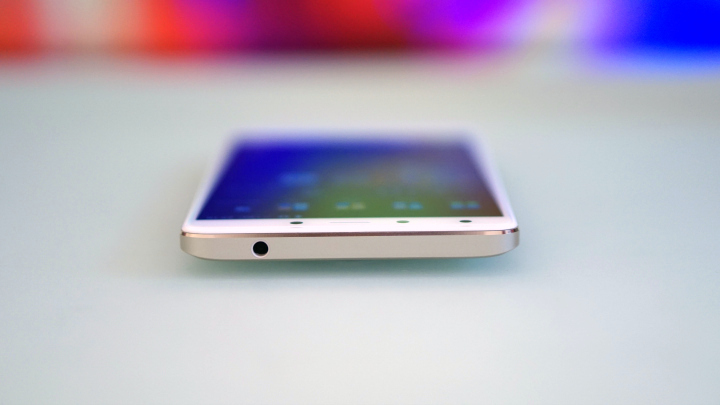 Looking at the top, there’s the headset jack, while down at the bottom is the microUSB port, and two sets of drilled holes for the microphone and loudspeaker. 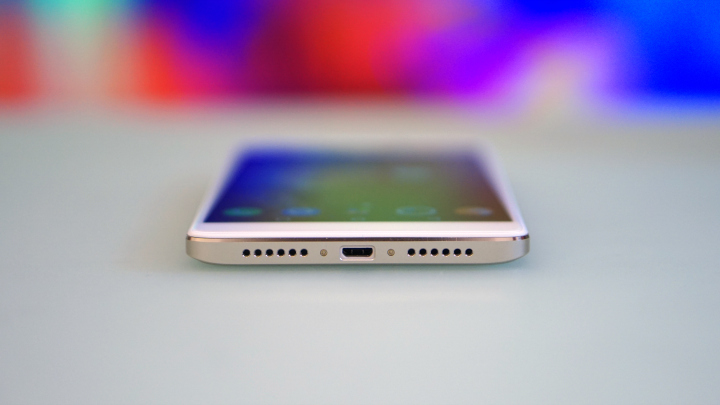 Flip the device on its back and you will see the large protruding 20.7MP camera, dual-LED flash, Laser AF, fingerprint scanner, a secondary microphone, and the Infinix branding. 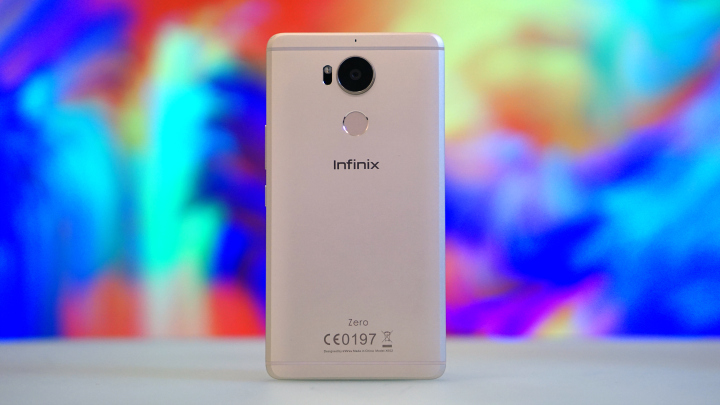 On the hands, the Zero 4 Plus demands to be used by two hands especially if you have small hands. It feels good though thanks to the aluminum body and 2.5D glass on top. The tapered sides are welcome features as they make the relatively chunky 8.25mm frame thinner. It’s also hefty at 203g but it’s an understandable trade-off considering the display size, premium build, and large battery.

If we’re talking about the display, the Zero 4 Plus has plenty of it at 5.98-inches, making it easily a phablet. It also has slim bezels on the side and the top which makes for a good screen-to-body ratio. Display quality is good with pleasing colors, wide viewing angles, and strong brightness when used outdoors. 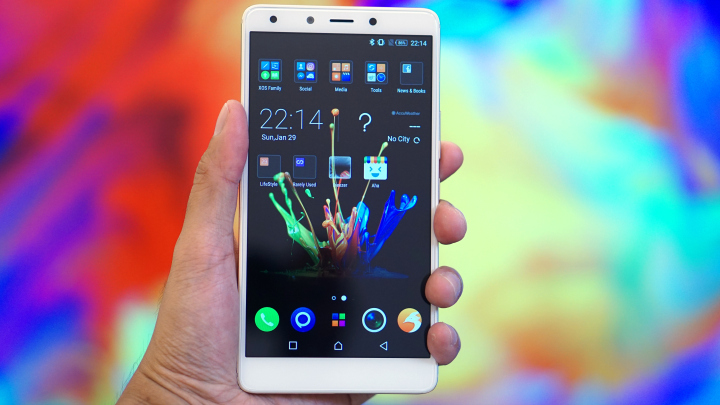 The loudspeaker, on the other hand, is loud and crisp. Like most smartphones, it lacks bass, but we never had problems listening to it whether we’re watching videos or listening to music.

The software side is handled by Infinix’s XOS Chameleon V2.1.0 based on Android 6.0 Marshmallow. It’s heavily skinned, with its own set of icons and wallpapers, but still, has a familiar layout. 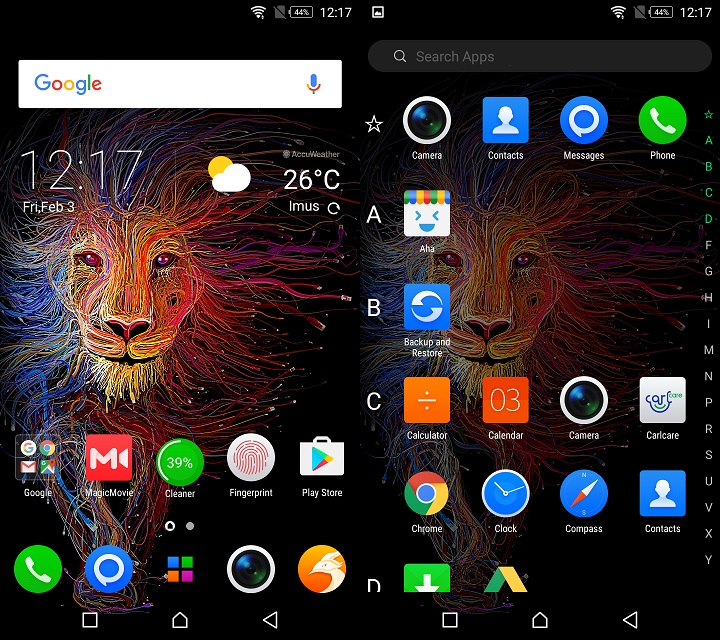 Newly installed apps are placed right away in the next home screen but it still uses an app drawer that displays all the apps in alphabetical order. Like what we stated in our past reviews of Infinix phones, this is a bit redundant, but can still be hand in some cases. 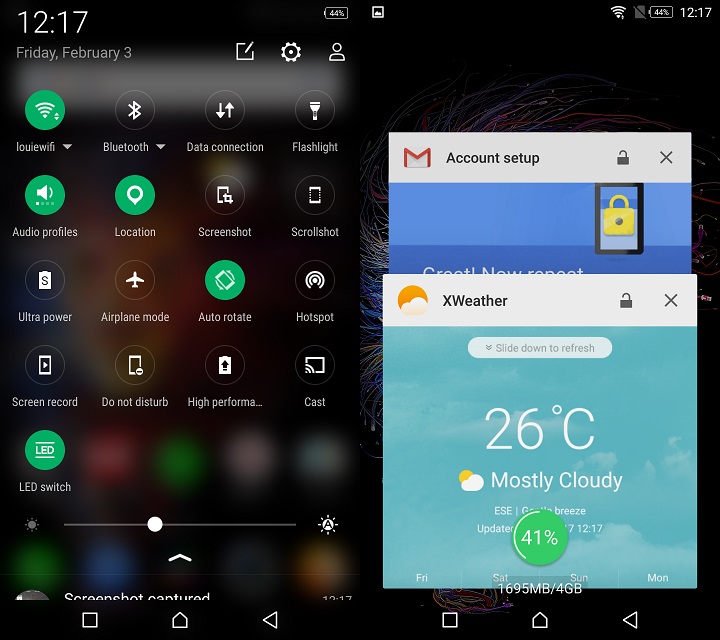 Speaking of apps, there’s plenty pre-installed, mostly utilities from Infinix. Out of the box, there’s Instagram, Facebook, Messenger, Palmchat, Aha app store, as well as Google’s own apps. Some of these can be uninstalled, but for those that you cannot, you don’t have to worry as it has plenty of storage at 64GB with 52GB left for the user. There are microSD card support and USB OTG function as well, so you’re pretty much covered when it comes to memory expandability. 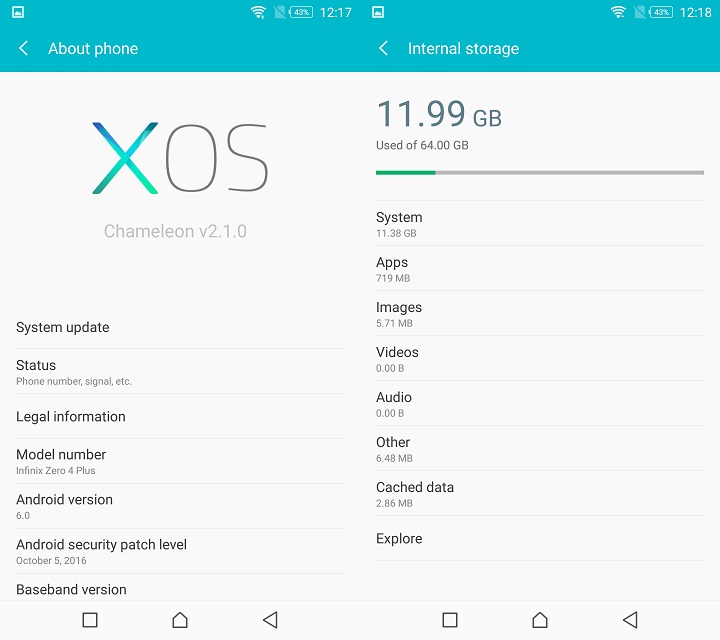 One feature of the Zero 4 Plus is the Multi Account. What it does is it makes a separate mirrored version of your installed apps like Facebook or Instagram and allow you to log into it with a different account. This is convenient for those who manage multiple accounts on social media as you don’t have to log in and out.

Imaging is one of the strongest department of the Zero 4 Plus. It has a 20.7MP main shooter with OIS, Laser AF, and dual-LED flash. The front camera, on the other hand, has a 13MP sensor with a LED flash as well. The images produced by the main camera are some of the best we’ve seen on a smartphone in this price range. 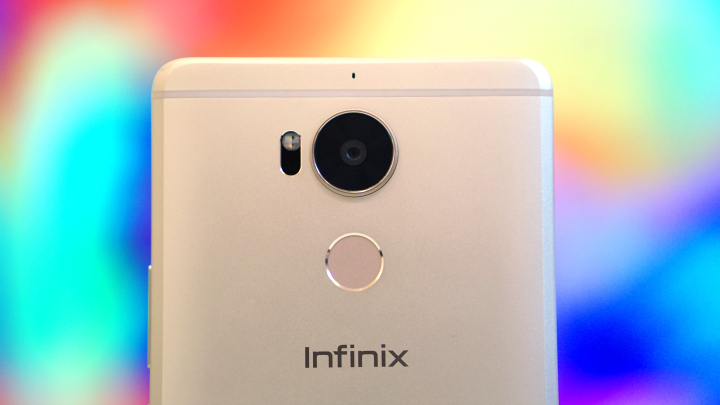 They’re crisp, with natural and accurate colors, and packed with details thanks to the high-resolution sensor. It’s also fast and locks in quick thanks to the Laser AF, while blur is minimized with the help of OIS. Although we noticed that it’s a bit sluggish when it comes to macro shots. It’s not a big bummer as we can just put a little distance and just crop it afterward. 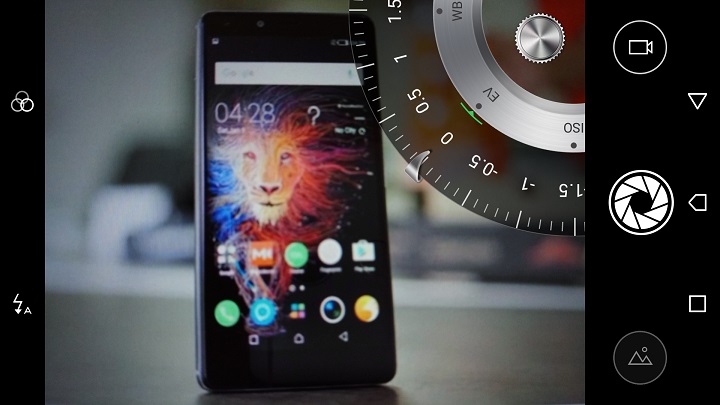 We can also use the Pro (Manual) mode if we want more control over the camera. The front camera, on the other hand, has fast face-tracking and beautify effect but a bit slow in capturing and produces images with soft details.

As for video recording, it maxes out at 1080p resolution at 30fps in MP4 format. However, for some reason, YouTube is having a hard time processing and we always get an error saying that we should upload a supported file type. Windows can play it though but only its audio. We were able to upload the video but has to be converted using a third-party software.

Powering the Zero 4 Plus is a MediaTek Helio X20 deca-core CPU clocked at 2.0GHz, Mali-T880 MP4 GPU, and 4GB RAM. The configuration has worked well with the device as it runs well and didn’t show any crashes, random reboots, or overheating. Games run smoothly like Mobile Legends and NBA Live Mobile, while the fingerprint scanner is snappy and unlocks the phone right away. Check out the benchmark scores below: 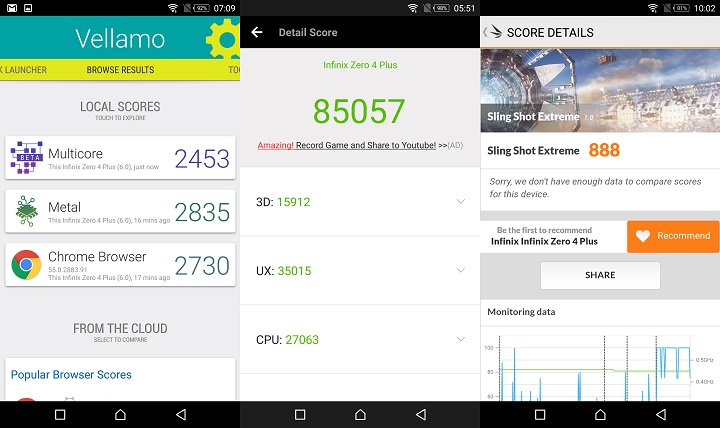 The Zero 4 Plus has basic connectivity features like 4G LTE, WiFi, and Bluetooth. There’s dual-SIM support but in a hybrid setup which means you have to let go of the microSD card support if you want to take advantage of this feature. Call quality and mobile data work fine as long as our network signal is good. 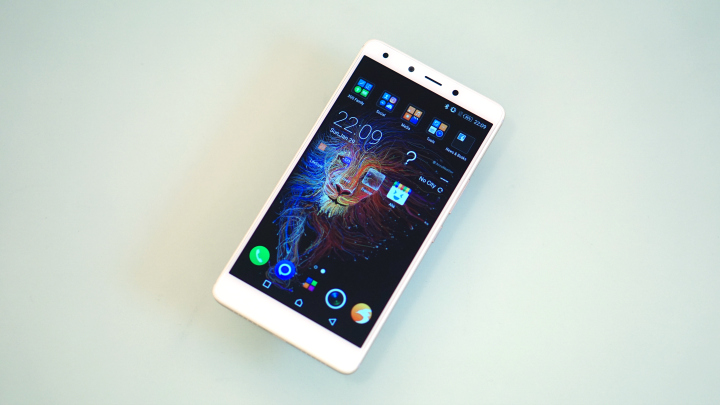 Powering the whole device is a large 4,000mAh battery which is good considering its large display. That capacity was able to give us a whole day of usage even with a couple of hours of gaming on the side. PC Mark’s battery benchmark rated it at 10 hours and 6 minutes which is good. As for our video loop test which involves playing a 1080p video on loop in Airplane mode at 50% brightness and volume with headphones plugged, the result is almost 14 hours of playback.

Infinix has certainly greeted 2017 in the Philippines with a bang thanks to the Zero 4 Plus. It almost has everything a heavy user would want in a smartphone – large vibrant display, good internal configuration, premium build, great camera performance, and large battery. Lastly, it doesn’t ask much at Php15,990. So if you’re on a hunt for a good phablet under this budget, then the Zero 4 Plus is worthy of serious consideration. 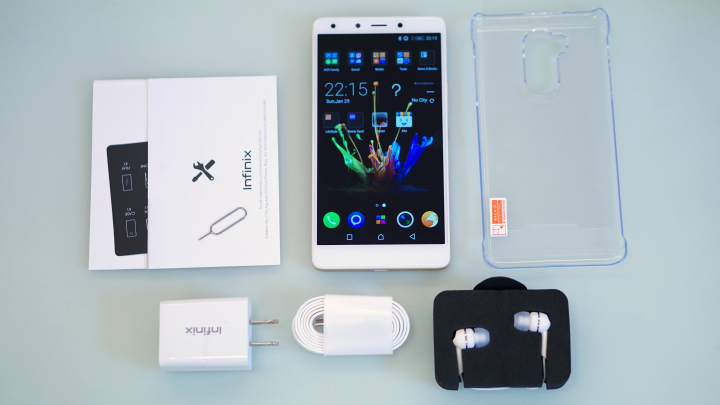 The Infinix Zero 4 Plus is available at Lazada via Hellotronics. See listing here.

Cons:
* Some pre-installed and unfamiliar apps
* UI could do well with a simpler layout
* Limited availability (out of stock as of writing)