The Infinix ZERO X Pro smartphone has just made itself available in the Philippine market, and it is equipped with a MediaTek Helio G95 chipset. But how does it fare with another phone that sports the same chipset, like the realme 8? Read on as we pin these smartphones in a spec comparison to determine which one is the best pick. 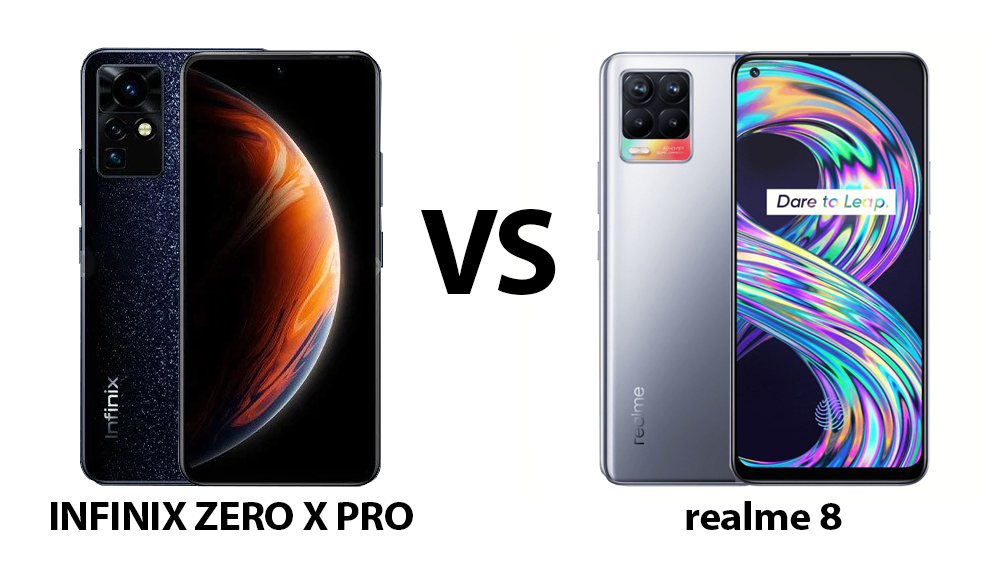 The first thing one notices when looking at the phone is the display. And for display, the Infinix ZERO X Pro has a slightly larger display at 6.67-inches compared to the realme 8’s 6.4-inches. Both support FHD+ resolution, but the realme 8 is equipped with a Super AMOLED panel, while its competitor sits at your regular AMOLED. The difference with super AMOLED is that it does the job better in power reservation, screen brightness, and provides less sun reflection.

Both the Infinix ZERO X Pro and realme 8 are equipped with a MediaTek Helio G95 chipset and the same ARM Mali-G76 GPU, so we can expect the same level of performance on both. However, do note that we can only determine the extent of their performance and thermals once we have both units for an extensive review.

For the category of RAM and Storage, both the Infinix ZERO X Pro and realme 8 smartphones hold 8GB of RAM and 128GB of storage. They also both have a dedicated microSD slot for extra storage.

In terms of cameras, each smartphone has its quirk. For example, the Infinix ZERO X Pro has a higher resolution main camera at 108MP, an 8MP periscope lens, and an 8MP ultrawide. On the other hand, the realme 8 is equipped with a quad rear-camera configuration, holding a 64MP primary camera, 8MP ultrawide lens, 2MP macro lens, and a dedicated 8MP b&w lens.

Despite having their differences, we will only know the extent of its picture quality when we test both smartphones out. Proof of which camera is better will then be laid out and provided.

Both devices support 4G LTE connectivity and Dual-SIM capabilities. However, the realme 8 is better equipped with WiFi 5 and Bluetooth 5.1 as compared to the WiFi 4 and Bluetooth 5.0 of the Infinix ZERO X Pro. In addition, both have USB-C, dual speakers, a 3.5mm headphone jack, and in-display fingerprint scanners.

We all would like a device to keep up with our daily activities without shutting off. With that said, the realme 8 wins this category as it sports a larger 5,000mAh battery compared to the 4,500mAh battery of the Infinix ZERO X Pro.

The Infinix ZERO X Pro may have a smaller battery, but it has a faster charging rate of 45W, while the realme 8 sits at a 30W—allowing you to get to use it faster right after it is speedily charged.

Which one to get?
If you do not mind spending the extra PHP 1K, you can opt for the Infinix ZERO X Pro, which grants you a slightly larger display, a smooth 120Hz screen refresh rate, and a 240Hz touch sample rate. Additionally, you get a 108MP main camera resolution and a speedy 45W charge rate.

On the other hand, if you are keen on a super AMOLED display, a dedicated B&W camera, support for WiFi 5, Bluetooth 5.1, and a large 5,000mAh battery, then realme 8 is for you.

What do you guys think? Which smartphone would you go for? Let us know in the comments down below.