The release of the Realme C11 adds a new layer to the brand’s line-up, providing an option for users with a budget around PHP5,000. This particular segment of the market is populated by only a few other brands, one of them being Vivo with the Y11. These two devices have similar specs, and different advantages. Which one should you get? 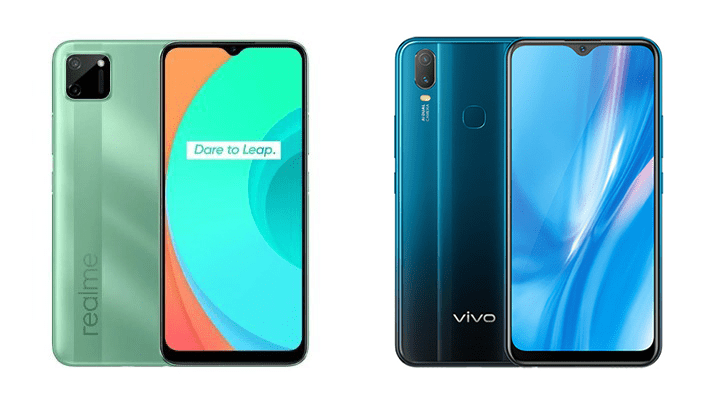 Pros of each device:

Both devices sport displays with HD+ resolutions, with the Realme C11’s being only slightly larger at 6.5-inches, compared to the Vivo Y11’s 6.35-inches. They both utilize a waterdrop notch type of setup to house the front camera. They also use IPS LCD panels, so we can expect around the same degree of color accuracy and viewing angles.

The Realme C11 is powered by a MediaTek Helio G35 chipset with a PowerVR GE8320 GPU. On the other hand, the Vivo Y11 comes with a Snapdragon 439 chipset with an Adreno 505 GPU. Both chipsets are firmly in the entry-level bracket, and when it comes to performance, users shouldn’t really expect a whole lot. They are both definitely enough for basic tasks like simple navigation, social media, and light games. However, heavy graphics games like PUBG Mobile and Call of Duty Mobile should be played with a low to medium graphics setting for smooth performance. Comparing the two though, the Helio G35 slightly outperforms the Snapdragon 439 in benchmarks such as AnTuTu.

Both devices come with 2GB of RAM and 32GB of eMMC 5.1 storage. Both also feature expandable storage via microSD card, however only the Realme C11 has a dedicated slot for this. The Vivo Y11 utilizes a hybrid card tray wherein the SIM 2 slot can be used as a microSD slot.

For rear cameras, both devices share the same sensors — a 13MP f/2.2 main and a 2MP f/2.4 depth. Picture quality however, will vary depending on how each phone’s camera software handles the image data. For selfies, the Vivo Y11 has a higher resolution, wider aperture front camera at 8MP f/1.8 compared to the Realme C11’s 5MP f/2.4. Then again, this doesn’t exactly guarantee better quality and software will still play a part.

When it comes to wireless connectivity, both devices are similar. They both support 4G LTE, Wi-Fi 802.11 b/g/n, and various satnavs. (GPS, A-GPS, etc.) However, the Realme C11 has the advantage of Bluetooth 5.0 compared to the Vivo Y11’s Bluetooth 4.0. This provides faster data transfer speeds and lower latency when using an equivalent Bluetooth 5.0 audio device like earphones or speakers.

For hardware features, both utilize microUSB ports and have 3.5mm audio jacks. The Realme C11 though doesn’t come with a fingerprint scanner, while the Vivo Y11 does. For the former, your only extra layer of security is face unlock.

For software, the Realme C11 holds the advantage of having Android 10 out-of-the-box with Realme UI on top. The Vivo Y11 ships with FunTouch OS 9.1, which is based on Android 9 Pie.

Both devices certainly can last more than a day with their large 5,000mAh batteries. However, both only support slow 10W charging, so once you’re out of juice with either device, prepare for a 2-3 hour charge to full.

I bought the vivo y11 since there are still no mi stores in batangas (only at sm lipa, a small kiosk) i didn’t have high expectations, since it was almost P6k when I bought it, I just wanted a phone with a big battery so my son could watch youtube and netflix on it. The cameras are sub par, especially indoors, the shutter is very slow, it also has tons of bloatware. So unless you are just going to do very basic tasks, stay away from the Y11.