Just this month, Samsung brought another member of its mid-range J-series squad here in the Philippines and this time it’s the only one in the series sporting a dual camera setup. Meet the Samsung Galaxy J7+. Needless to say, the said smartphone’s strongest suit is its dual camera but can it live up to our expectations? Time to find out in our review. 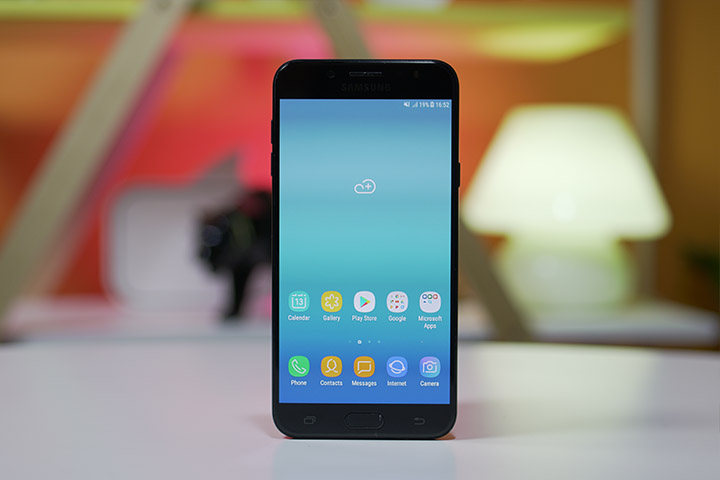 Author’s Note: Samsung only provided us with the unit itself without the box and its contents (e.g. charger, earphones, SIM ejector tool) so results may vary, particularly with charging time when a standard Samsung charger is used.

The Samsung J7+ has this familiar design language akin to its J7 Pro sibling. It has an all metal unibody and slim side-bezels, making the smartphone look and feel premium while being quite hefty. It sports a 5.5-inch Full HD Super AMOLED display at the front, along with a 2.5D Glass Protection. On top of it you will spot the 16MP front camera with LED flash, and the call speaker. 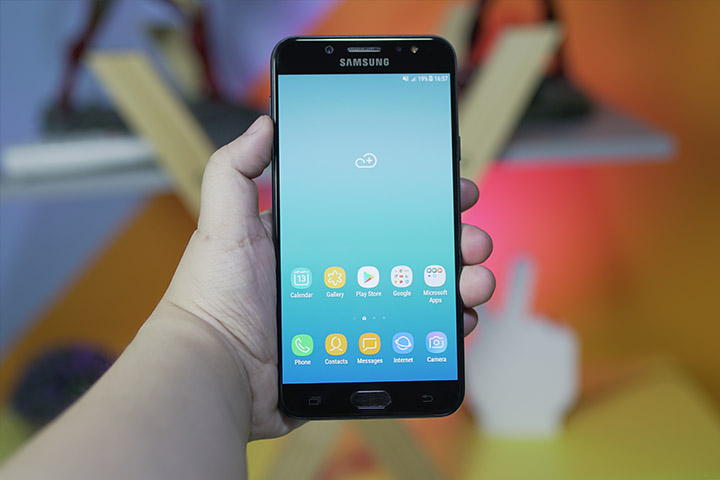 Down below we have the non-lit capacitive navigation buttons, and the hardware home button that also acts as the fingerprint scanner.

On the left side of the device, we will find the volume rocker, and the hybrid nano-SIM tray. The right side, on the other hand, houses the power/lock button, and the speaker grille. Yes, we know, its speaker grille’s location deviate from your conventional ones as it’s located on the right of the device and to tell you the truth, the location is spot-on. This allows us to play games or watch videos in a horizontal position without blocking the speaker. 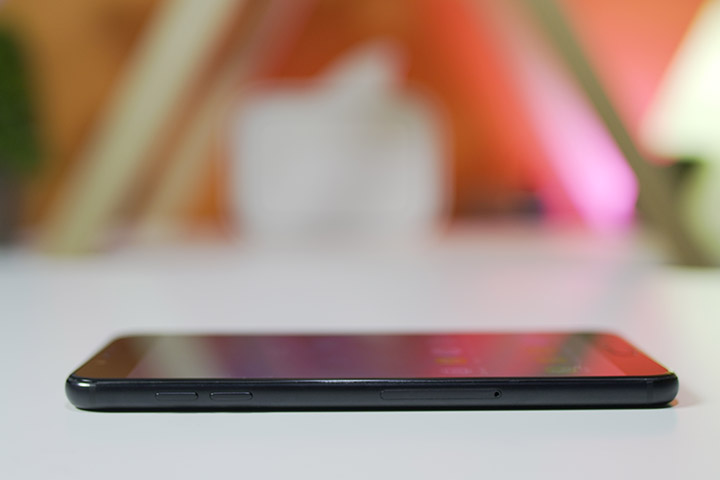 Nothing much is on top of the device apart from the noise-cancelling microphone. 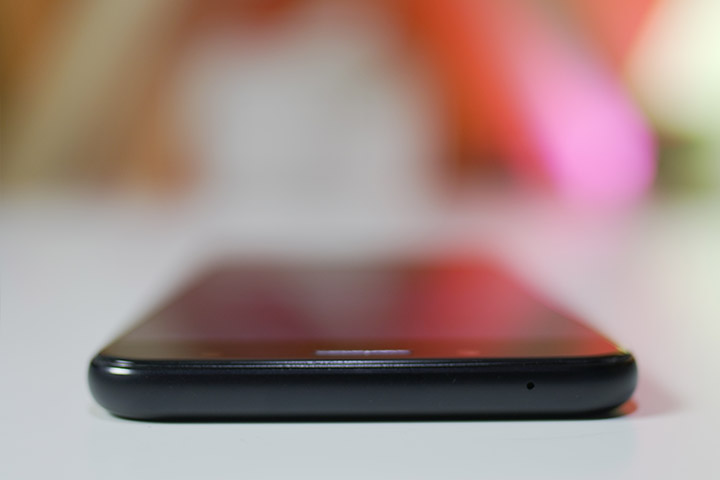 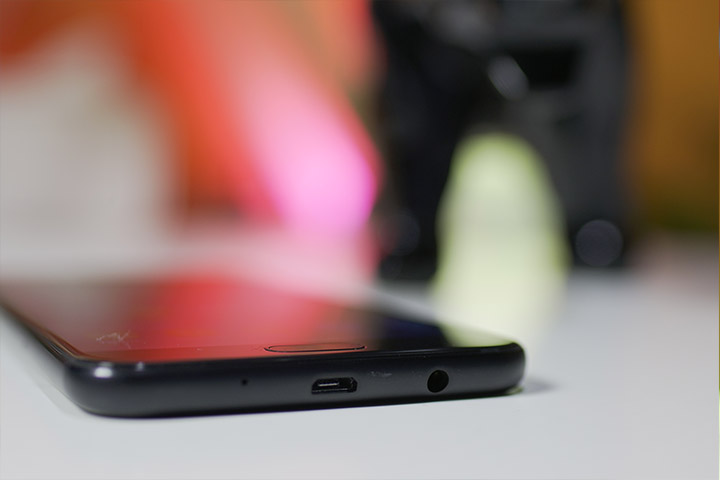 Underneath the device houses the main microphone, the micro-USB port, and the 3.5mm headset jack. Turn on its back and you will find the star of the show: its 13MP + 5MP dual rear cameras accompanied by an LED flash, and the Samsung logo. Its metallic back is somewhat more prone to hairline scratches than fingerprint smudges (unless you have spasmodic/oily hands that is). Audio-wise, the device provides a somewhat decent and whole sound quality. It’s got a little bass to it and when set at max. volume, its audio quality still manages pretty well without sounding tinny.

The J7+ runs on Android 7.0 Nougat skinned with Samsung’s very own TouchWiz UI. It’s got all the Samsung propietary apps such as Samsung Health, Samsung Notes, Voice Recorder, Email, Internet, and My Files. It also comes with Galaxy Apps a la Google Play Store. Pre-installed Google apps, Facebook, Opera Max (which is already discontinued), and Microsoft apps are also present out of the box. Swiping left on the homescreen allows you to access Samsung’s virual assistant, Bixby. Bixby shows you your schedule for the day (it also syncs with your Google Calendar), most visited webpages, tomorrow’s weather, latest news, and more. And if you’re forgetful, you can set a reminder and Bixby will notify you. 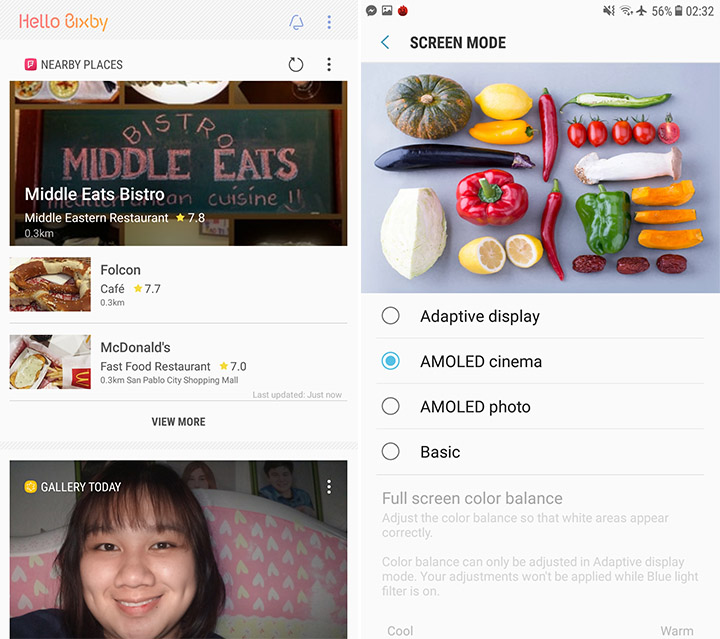 Out of 32GB internal storage, 8.1GB of it were consumed by the system (which is a pretty huge file size), thus leaving us with 23.9GB left to use. You can further expand this via microSD card (up to 256GB).

Off to its camera. The J7+ offers a 13MP f/1.7 + 5MP f/1.9 dual rear cameras and a 16MP f/1.9 front camera, both with their dedicated LED flash. As for its dual rear cams, the device features “Live Focus” which allows you take photos with artificially blurred background. You also have the freedom to adjust how blurred you want the background to look like. Other features such as Pro, Panorama, HDR, Night, and Food modes are also present. If you wish to add more modes, you can download three available ones namely Sports shot, Animated GIF, and Beauty Face at the Galaxy Apps. It also comes with 16 filters for you to choose from, and if you want more, you can download additional filters at the Galaxy Apps as well. As for its front cam, the device gives you two modes to choose from: Wide Selfie and Night mode. And just like the dual rear cams, it also features “Selfie Focus” with Beauty Mode, which lets you achieve that bokeh effect on your selfies and adjust the blurriness to your liking. Or if you want to go all out kawaii, there are Stickers and Stamps for you to choose from. 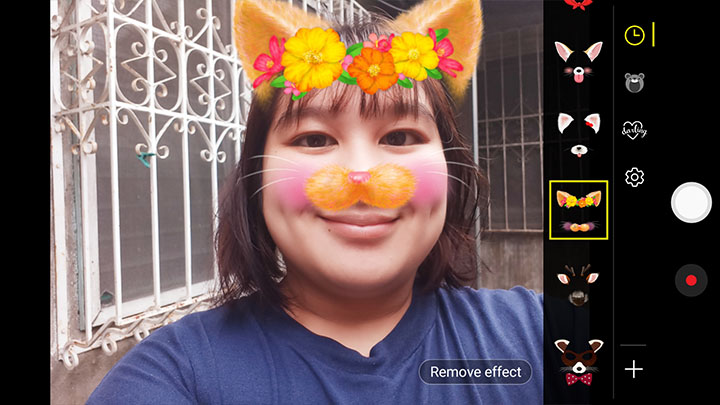 Taking photos on the J7+ was a fun experience. Resulting photos look pretty darn good and crisp, most especially in well-lit environment. However, using the Auto mode causes overblown lighting sometimes. Its dynamic range is also at decent levels as well as its autofocus (not the fastest but still okay). Lowlight photos tend to be pretty noisy though, and the quality is average. As for its shooting performance, we encountered slow processing of photos, particularly when using the Live Focus feature. This dilemma only exists in the review unit we have since we tried testing out a J7+ unit from a Samsung Store and got fast results.

Video-wise, the device can shoot up to Full HD @ 30 fps. It’s not the best we’ve seen so far in this category, but it still provides good and sharp video quality. The device also lacks EIS or OIS feature so expect a pretty shaky footage while walking. Here’s a sample video below:

Powering the J7+ is a MediaTek Helio P20 octa-core CPU, paired with a 4GB of RAM. So far, playing games like Into the Dead 2 and Asphalt 8 have been okay although we’ve experienced stuttering and lags when we tried to set it at High graphic settings. Launching apps were also pretty quick but there are instances where we experienced multiple crashes amid usage. Its fingerprint scanner is the not the quickest one we tried so far, and there are times when it fails to recognize our fingerprint. But nonetheless, the device still handles multitasking pretty well. 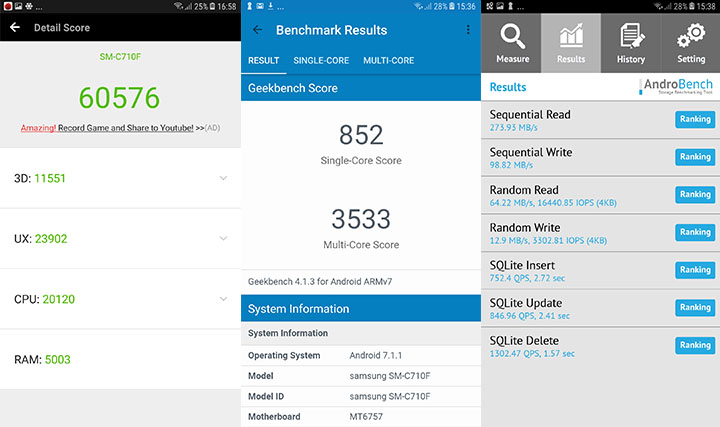 Meanwhile, here are benchmarks scores we got: 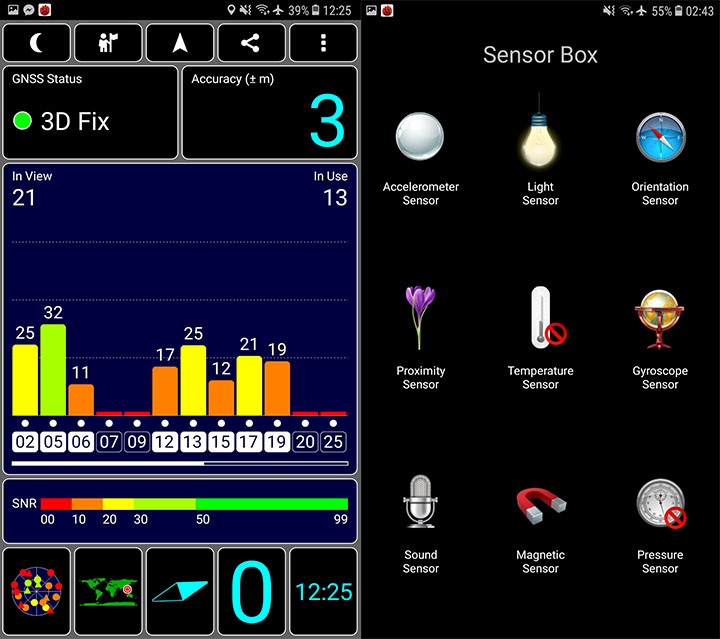 The J7+ covers basic connectivity functions such as WiFi, Bluetooth, and GPS. It also supports 4G LTE. Unfortunaly, the device doesn’t offer NFC. So far, call quality is clear as long as you’re in an area with good coverage. Using Google Maps and Waze locks in pretty quick and gives accurate result.

Under the hood, the J7+ offers 3000mAh of battery. Despite its average capacity, using the device lasted us an entire day, thanks to the power efficiency of the Helio P20. 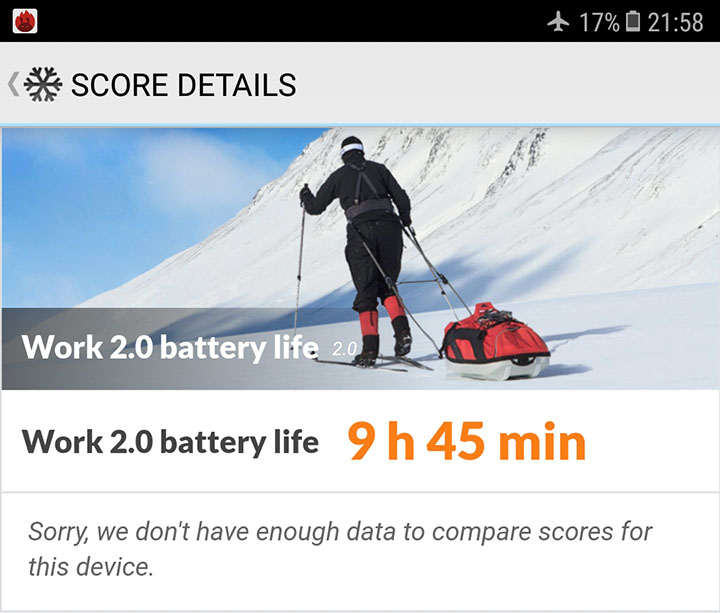 We previously mentioned that our unit didn’t come with the standard Samsung charger so we used our own charger (2.1A). Charging time from 0% to 100% took us around 3 hours. As for our video loop test, the device yielded 12 hours and 35 minutes and 9 hours and 45 minutes on PCMark battery test.

Quite honestly, the J7+ is no surpise. It’s also worth noting that it comes a bit pricey at Php19,990, considering that its competitors such as Huawei, ASUS, Vivo, and Oppo offer smartphones that are less than the said pricetag but gets a bump-up with its specs. But with the device’s premium built, Super AMOLED display, 4GB RAM, and dual rear cameras, the J7+ still hold a name of its own. The Samsung J7+ is now available in all Samsung stores. It is also available at 9 months 0% interest installment with Home Credit (with a required cashout of at least 30-40% of SRP).