Consider the Samsung Galaxy S20 as the lowest-priced unit you can get your hands on in the newest S20 series, but that’s not to say that it’s the worst. It’s the underdog compared to the S20+ and S20 Ultra, and yet here you are considering it since it’s the most affordable gateway to the updated S20 line—or you’re just really into its compact form factor. So we’ve had the phone for almost two weeks now and here’s our full review. 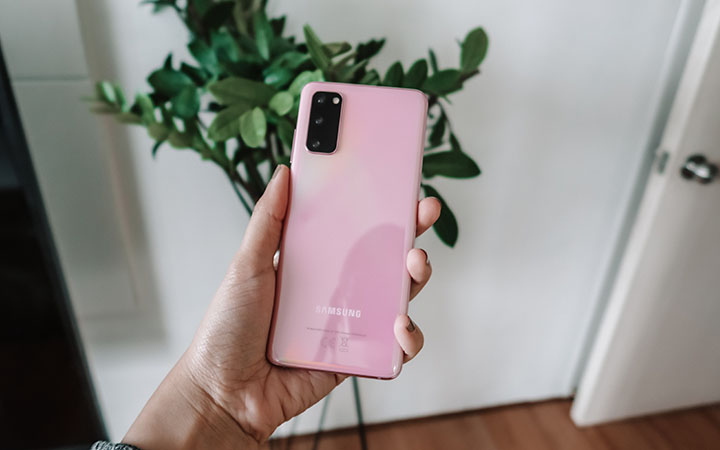 If you’re coming from last year’s Galaxy S10, then you won’t recognize some significant differences in their construction. The S20 is a bit smaller than last year’s S10 by 0.1-inch to be specific. Nonetheless, they feel almost the same to grip that gives off that one-handed comfortability. It’s light, slim, built with glass and aluminum, and it’s easy to slip in your pocket. 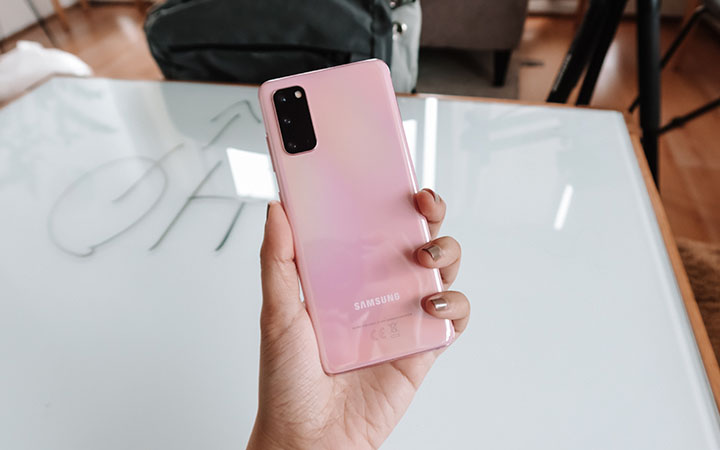 Such major design upgrades are in the cameras literally and on paper. Of course, you won’t miss its vertically aligned rear cameras placed in a rectangular bump together with the LED flash and a rear microphone—which is something new, but smart. 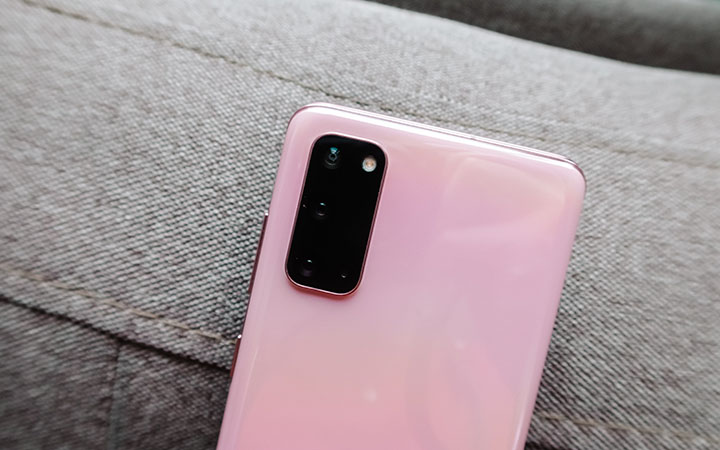 Just like all the other smartphones in the S20 family and on the Note 10 line, the S20 inherits an infinity “O” display with its front camera on the upper middle of the screen. This creates a black hole that isn’t noticeable unless you inspect closer. Now, if you’ll look a little more tightly, usually there would be an earpiece on top of the front camera, and in the S20’s case, rather the whole series’ case, there still is an earpiece, it’s just not noticeable at all. 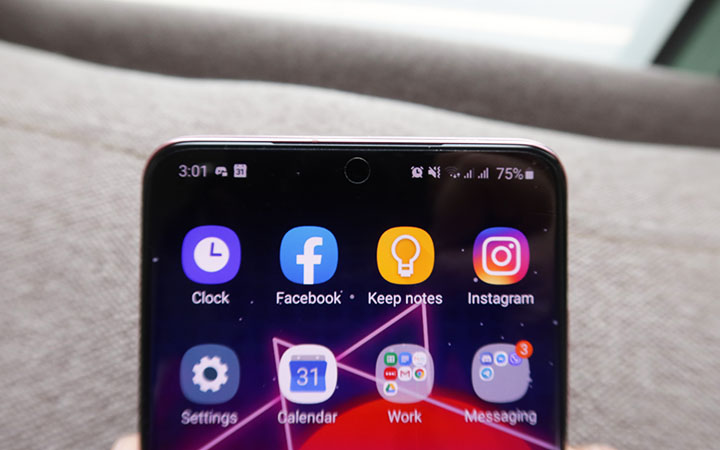 Samsung’s S series of smartphones have been known for their edge display, but for the S20 line, it seems like the brand finally decided that it’s more practical to trim the side display down. It sure is nice to see some screen on the sides, but minimizing the edged display makes it easier for screen replacements or to avoid accidental touches. For protection, we get Gorilla Glass 6 and a pre-installed screen protector. 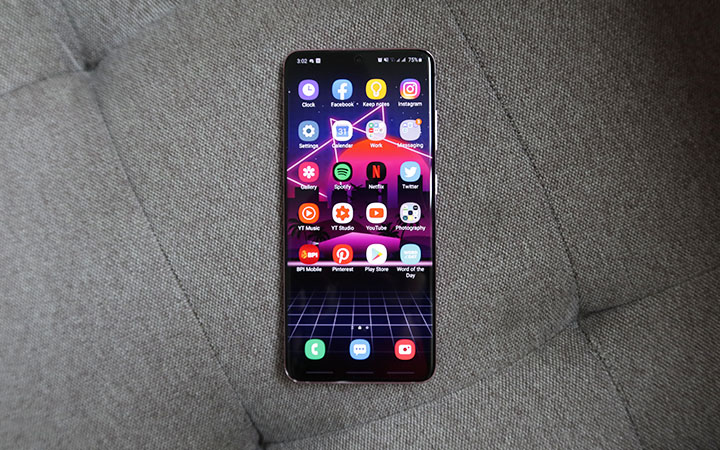 The under-display Ultrasonic Fingerprint Scanner can also be found on the screen. We’ll talk more about that later. Located on the right, are all its buttons: power button and volume rocker. There’s no Bixby button. However, the power trigger can act like one if you long-press it. If you don’t want it, then you can simply disable it in the settings as well as add other controls like double click to auto-open an app. Overall, the buttons are easy to reach, tactile, and clicky, even for small hands. 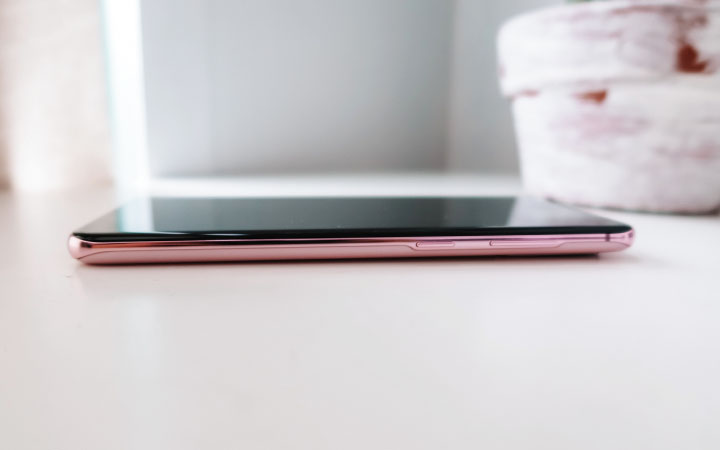 The left side is bare, while on top are its secondary microphone and a hybrid SIM slot that’s upgradeable up to 1TB. 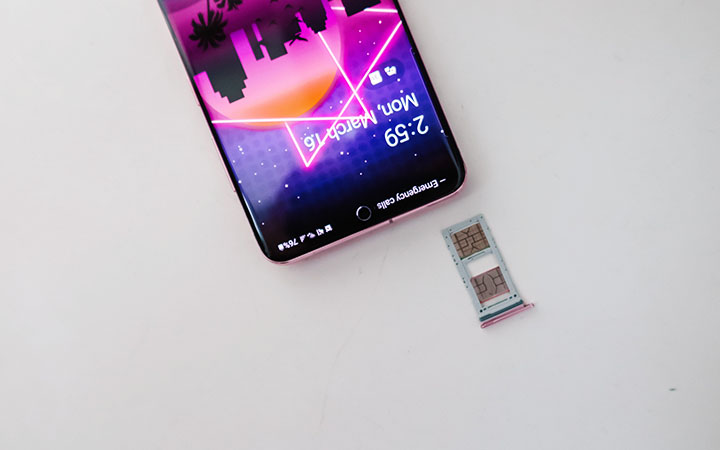 At the bottom are its primary mic, Type-C port, and loudspeaker. It’s already expected that there won’t be any headphone jack onboard, but it’s still a bummer. Either way, the package comes with a Type-C Sound by AKG earphones to compensate. Locally, the S20 is available in Cosmic Gray or Cloud pink, and the unit we have is in the latter. Just like its siblings, it also has IP68 dust and water resistance wherein it can withstand up to 1.5 meters deep at a maximum of 30 minutes—pushing it to its limits wouldn’t be the best idea, though.

Now to describe the Galaxy S20’s overall design, the premium feel is already given. Just like what I said, it feels the same to hold compared to the S10, except for the flatter display. It’s seamless, and adding a case still wouldn’t make it feel big. 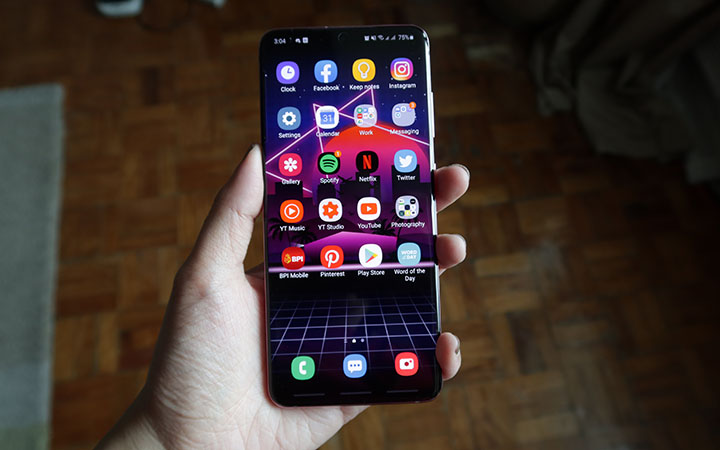 You can also tweak the screen color between Vivid or Natural. It can get vibrant, sharp, and dynamic when you use Vivid, and we have no problem with that. Now you probably already heard that the S20 also has a 120Hz display option, which is excellent, animations work smoothly than ever, and it looks neat when playing games.

However, taking advantage of the 120Hz will only limit the screen resolution to HD+. We noticed that the phone can get hot if you continuously use this refresh rate, so make sure that the device’s display is in an optimized state, or just tone down the refresh rate to 60Hz if you’re playing heavy games. Do note that using a 4K display on the S20 can also result in minimal overheating. But if you ask me, I’d still go for 120Hz since it completely makes the display look dope.

So we get slim bezels all around, and we didn’t find the O-notch much of a bother when watching videos.

YouTube videos can take up the whole screen when you zoom in, while sadly, for Netflix, you can’t get the whole screen experience since a black bar will stretch on the notch area to give a border. As for audio, expect an immersive experience as sound not only comes from the downward-firing speaker but also from its earpiece. The combination of the two speakers is excellent, with good clarity and balance. It’s loud enough to be heard in a medium-sized room, and overall it doesn’t disappoint. What’s disappointing, though, is the lack of a headphone jack. As Samsung is fastly directing to a wireless experience, it can still be a hassle not to have an option for wired headsets. Nonetheless, the package includes Type-C AKG earphones, and its Dolby Atmos works well with true wireless headsets. 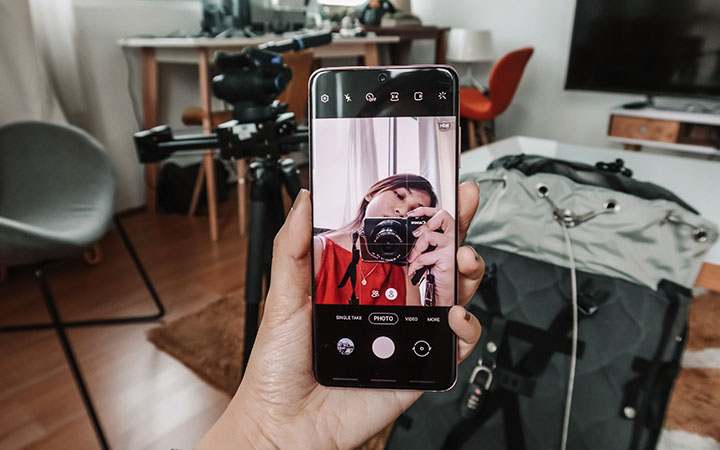 When it comes to features, besides the 64MP quality, you get extra quirks like 4k and 8K video recording, Space Zoom, up to 30X Super-Resolution Zoom, AR Zone, Hyperlapse, Super Slow-Mo, Pro video, Single Take, and an option to save photos in RAW.

Quality-wise, the photos themselves come out rich in colors and sharp even if you’re not using the 64MP mode. We get great details, however, some scenarios may seem shadowy. The dynamic range is phenomenal, especially in well-lit situations. And I find the ultra-wide-angle lens useful in most cases, we feel it should be a standard in flagship smartphones moving forward. Check out some of the samples below:


Samsung claims that they tripled the sensor size for enhanced night shots, and in our experience, using night mode does show significant improvements in the photos’ details and brightness without looking too grainy or washed out. You can even use night mode and still zoom it to 30x.

Speaking of 30x zoom, you won’t find any 100x zoom on the S20, that’s reserved for the S20 Ultra. Nonetheless, a max of 30x zoom still works well, and we appreciate how Samsung’s new camera interface allows you to see where your camera is focused on a small screen.

We get almost the same sharpness and bright, vivid photos from the front camera with some interesting depth-of-field effect:

Talk about Samsung’s new feature Single Take wherein users can take short 8-second videos, and immediately with AI, it’ll give you suggested best part photos so you can still enjoy moments. It even edits the shots however expect the quality, not at its best. It’s good enough to be useful when going to events or during bonding times.

When it comes to videos, you can shoot up to 8k with the rear cameras, but that will limit to only 24fps. Either way, this is something rare for a smartphone to have today, and having it can be handy if you intend to capture high-quality videos and still be able to crop in post. You can even pull 33MP stills right out of the 8K videos, which is great. But for now, I always find myself sticking with 4K up to 60fps since it can save more space, still provide fantastic quality, and the 8k can overheat the phone.

If you want steady videos, the Super Steady feature is still strictly available for 1080p only.

Overall, the cameras have improved from its predecessors, but I wouldn’t say it’s the best. Using the camera app itself can be a hit or miss so make sure to take multiple shots since some photos can end up looking blurry. Other than that, I’m pretty sure you’ll quickly get used to its interface.

Running the software is Samsung’s One UI 2.0 based on Android 10. Honestly, there’s not a lot of significant differences in this refurbished version, as we still get the same clean and user-friendly interface that complements its vivid display. It comes with several pre-installed apps, which include those from Samsung, Google, and Microsoft. We don’t mind these apps as they’re essential, while others are there for productivity purposes. Of course, you won’t miss Bixby— Samsung’s AI assistant, while other nifty features include edge lighting for notifications, one-handed usage, edge panel shortcut, and Dark Mode.

There’s also a “keep open for quick launching” feature that allows you to lock, apparently only one app, to keep open at all times to save time when syncing. I find it useful, but hopefully, Samsung can accommodate more apps for this in a software update.

For storage options, the S20 comes with 128GB of internal storage, and it’s expandable via MicroSD card up to 1TB, so that shouldn’t be a problem.

Under the hood, the S20 comes with a high-end Samsung Exynos 990 complemented with either 8GB or 12GB of RAM. Our unit has 8GB, and even so, it is smashing.

Apps load quickly, and it can practically handle anything you throw at it without any stutters. Playing heavy games can be buttery smooth, but just be cautious as we did experience some overheating, especially under a 120Hz or WQHD+ display. We highly recommend slapping a case on it since its metallic sides can get alarming hot at times.
For some numbers, take a look at the benchmark scores we got:

Some of the common features the S20 gets from the S10 is security. You can unlock the phone through Samsung’s facial-recognition and Ultrasonic Fingerprint Scanner under the display. They’re quick, nothing pretty much changed about it, and we have no complaints about that. One new thing is its built-in anti-malware that’s powered by McAfee, which allows users to scan their devices natively for malware or suspicious activity for free. You can find this in the Settings under Device Care.

The S20 series is known to be 5G ready devices. Unfortunately, Samsung won’t be offering that in the Philippines. So connectivity features include an LTE hybrid dual SIM support, WiFi, Bluetooth 5.0, GPS, and NFC. 4000mAh is a significant improvement over the S10’s 3,400mAh cell; And for the consumption, its display takes up, it’s worth the size.

Using PCMark battery test with 120hz turned on, we managed to get 11 hours and 1 minute on a single full charge. Meanwhile, in our standard video loop test and display settings on 60hz, we got a solid 14 hours and 39 minutes.

If you’re not the type who’s always on your phone, or only use it for casual calls, texts, and social media browsing, then the S20 can last you a whole day. However, if you’re a power user and you play a lot of games, then you might need to charge the phone about 2 to 3 times a day. Don’t worry, though, as charging comes quickly with its fast charger. It takes less than an hour to charge it from 10% to 100. The Samsung Galaxy S20 has the right amount of exceptional features you can find in a flagship. It sure doesn’t go over the top with 5G and 100x zoom, but we consider it as the balanced choice even if the specs were toned down in some aspects.

For PHP 49,990, you get the same beastly performance found in the S20+ and Ultra, the same quality of photos and videos, and of course, the same outstanding display. So if you’re new to Samsung’s flagships, then the Galaxy S20 is a good starting point. And if you enjoyed last year’s S10 series’ experience, then you’ll appreciate the S20 too.