After the launch of HMD Global’s trio smartphones (Nokia 6, Nokia 5, Nokia 3), now comes the flagship smartphone, the Nokia 8, which has just been released yesterday. 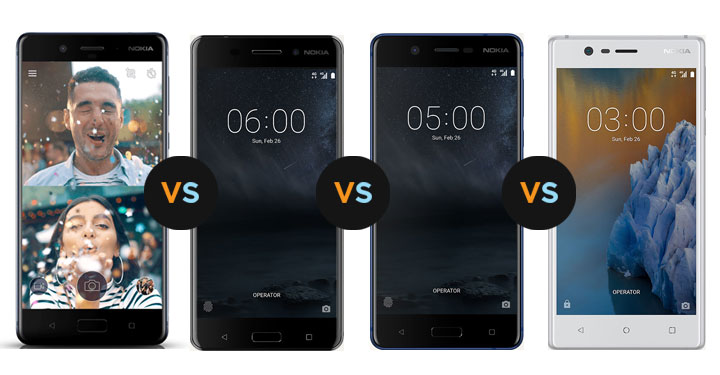 The Nokia 6 is the top-tier smartphone before the Nokia 8 outs into the public. It has a 5.5–inch IPS LCD display with 1920 x 1080 resolution, a Snapdragon 430 chipset, 64GB internal storage, 4GB RAM, 16MP PDAF rear camera with dual-tone flash, 8MP front camera, and a 3000mAh battery with fast charging to power up the smartphone.

Here are their detailed specs.

Here are each smartphone’s advantages from each other:

+ Has a 6GB RAM and 128GB internal storage variant

+ Largest battery (but not much difference)

+ Highest megapixel value of rear camera (in a single lens)

= Has the same CPU, GPU, battery, and camera with the Nokia 6

The Nokia 5 is a somewhat mid-tier smartphone. Its specs are well-balanced, however, it falls a bit short for its price since a 16GB internal storage and a 2GB RAM is commonly seen on entry-level smartphones. It has a 720p resolution, which is the same with the Nokia 3. It has a Snapdragon 430 processor, just like the Nokia 6. The said processor is known for its battery optimization and efficiency in its performance. Its camera is also impressive with a 13MP rear camera and an 8MP camera which are good enough for its tier. As for its price, it is cheaper than the Nokia 6.

The Nokia 3 is HMD Global’s entry-level smartphone, but it packs a punch for its price. It has the same internal storage and RAM as the Nokia 5 which is pretty impressive for a budget smartphone. Its rear and front camera both have an 8MP which are decent for an entry-level smartphone. As for its price, the Nokia 3 is definitely the cheapest of them all and its price is pretty much justified for its specs and price.

Lastly, the Nokia 8. Apparently, the Nokia 8 outmatches all three smartphones in almost all aspects. This beast carries a Snapdragon 835 chipset, which is Qualcomm’s latest flagship processor. Aside from that, it has a 1440 x 2560 screen resolution resolution and a dual rear camera in which the other three smartphones lack. Its cameras are equipped with Zeiss optics which is known for producing one of the best lenses. As for its battery, it carries 3090mAh which is slightly higher than the Nokia 6’s and the Nokia 5’s 3000mAh battery. Its speakers are also notable since it comes with the Nokia OZO audio. Another feature to note is that this smartphone has an IP54 dust and splash resistance. From this, we can safely say that the Nokia 8 is on a different level compared with the three smartphones and we are hopeful to test this smartphone out soon. This is truly Nokia’s flagship smartphone. As for its price, you can expect that this will be more expensive than the Nokia 6.

All Nokia smartphones included in this list have a good and solid build quality since HMD Global, the new owner of the Nokia brand, has been firm with its quality construction in which Nokia phones are known for. All smartphones have a 2.5D Gorilla Glass protection so users won’t have to worry about its screen having cracks anytime soon. Also, these smartphones are already on Android 7.1.1 Nougat right out of their boxes.

If we rate these smartphones from highest to lowest in terms of overall performance, we would get Nokia 8 > Nokia 6 > Nokia 5 > Nokia 3 which is pretty much straightforward for Nokia’s naming scheme. As for the smartphones’ prices, it’s obvious that the Nokia 3 is cheapest of them all.

Let us know your thoughts on these four Nokia smartphones in the comments section below.