Vivo latest budget offering for the Philippine market sits in between its Y-series of Android smartphones. It does offer balanced specifications, smooth performance, and a quality selfie camera. Here’s our review of the Vivo Y53.

The device doesn’t look that different from its sibling, Vivo Y55, with its utilitarian candy bar design and a fair amount of bezels surrounding the 5.2-inch display. Above it are the selfie camera, the earpiece, and a couple of sensors. Below are three capacitive buttons for navigation which don’t have a backlight. 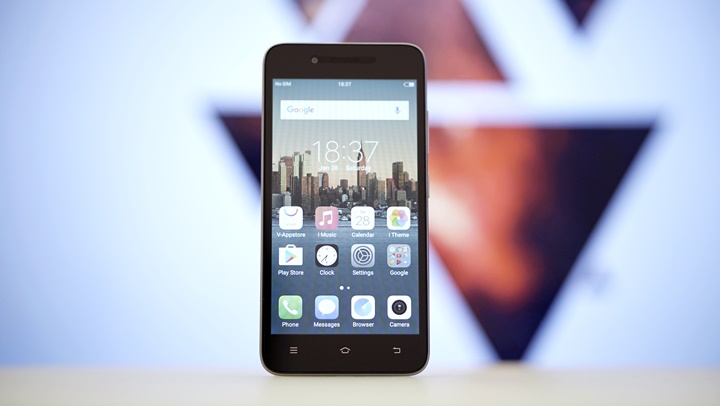 On the left, we’ve got a triple card slot — two Nano SIM cards and microSD card. The physical buttons for power and volume are situated on the right-hand side of the phone. 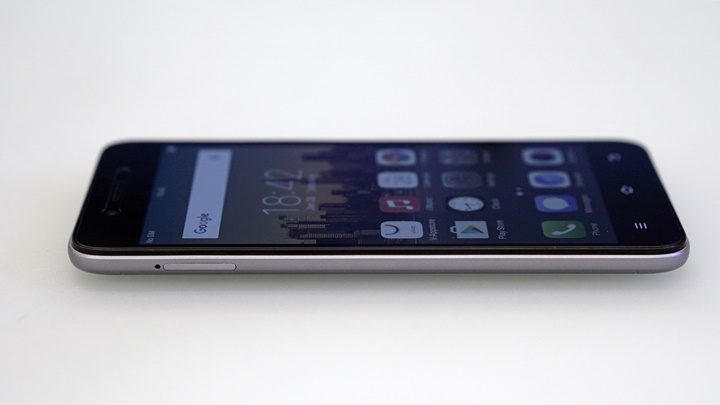 The top is pretty plain with just the 3.5mm headphone port sitting on the far right side. 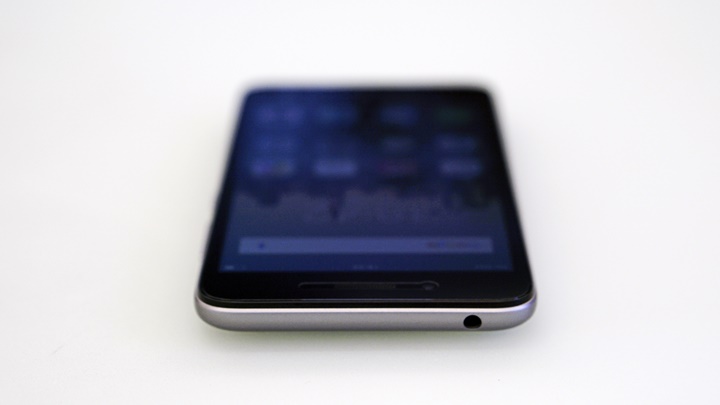 The bottom end of the Y53 has the microphone, micro-USB port, and the loudspeaker. Unlike other smartphone designs, though, the handset doesn’t sport symmetrically drilled holes. At the back, we have a familiar layout and design with the 8MP primary camera and its LED flash situated at the top left corner and the Vivo logo shining in the middle. The handset’s casing is plastic with no touch of cold premium metal but it feels comfortable to hold since it’s got rounded edges. It also feels solid on hand with no creaks or whatsoever thanks to the unibody polycarbonate build.

The Vivo Y53 is a pocketable phone by today’s standards. Its 5-inch display is smaller than most. The same can be said about its resolution. Vivo granted the handset a qHD resolution or 960 x 540 pixels which give us a jagged 220ppi of pixel density. If there’s any consolation, it’s an IPS LCD with wide viewing angles and an okay color reproduction. 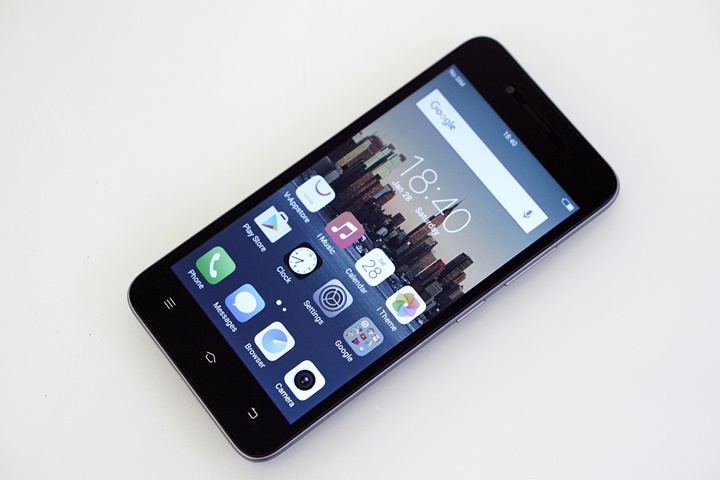 The down firing speaker is surprisingly loud and of decent quality. It can easily fill a small room and will do good for watching videos on YouTube. Also, the phone can play lossless audio with a preloaded sample music to test out.

Vivo is one of those smartphone makers that’s fond of deeply changing the Android UI and making it look more similar to iOS. Just like its sister company, OPPO, Vivo implements their own skin called FunTouch OS which is now on version 3.0 and is based on Android 6.0.1 Marshmallow. 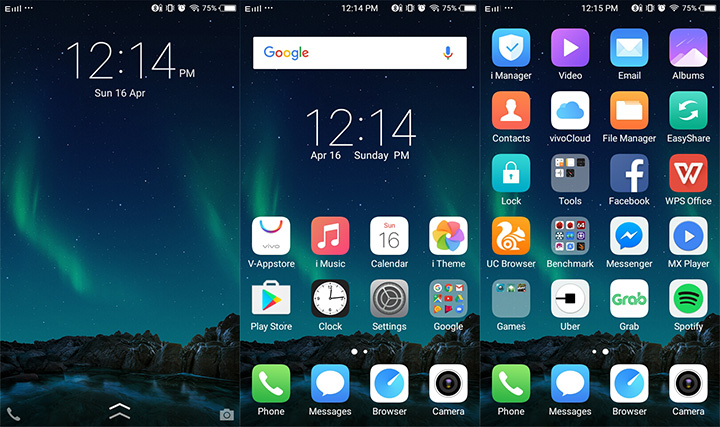 It borrows a lot of cues from iOS including the single layer of app icons and a separate control center accessible by swiping up from the bottom. There’s still the notification tray and usual widgets, of course. The icons and overall UI design are also strikingly similar that it can disguise as an iPhone. We’re not necessarily fans of this implementation but at least you get the best of both user interfaces. 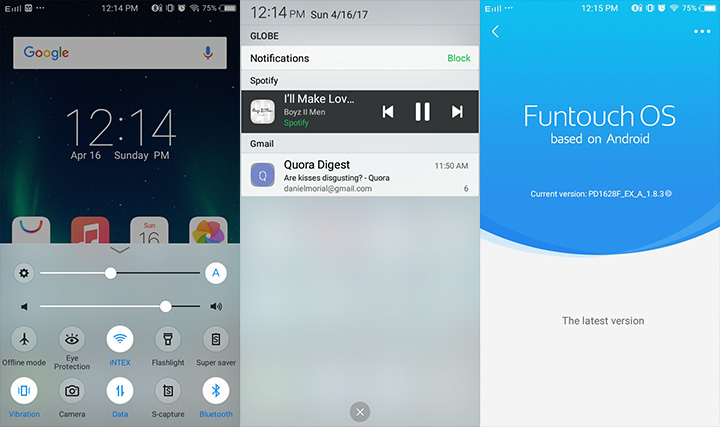 There are preloaded Google applications, Facebook, WPS Office, and UC Browser. Out of the box, you get 9.18GB of available space out of the total 16GB internal storage. There’s a dedicated microSD card slot in case you need to expand it.

The cameras onboard the Vivo Y53 are pretty standard with an 8-megapixel rear shooter and a modest 5-megapixel selfie camera. Its camera launcher, as expected, is copied from iOS with additional shooting modes that some might find useful. 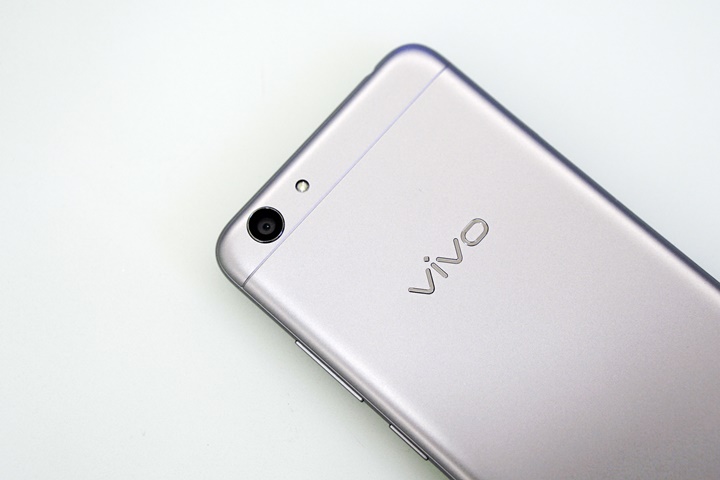 The 8-megapixel rear camera doesn’t impress as the stills look dull and muted. Autofocus also takes some time to lock on. The 5-megapixel selfie shooter, on the other hand, is capable of producing bright selfies. It also has built-in beautification that you can manually tweak depending on your preference. Here are some samples:

As for video recording, you can do 1080p at a steady framerate of 30fps. Quality is just so-so and with no continuous AF to keep things in focus when panning.

Powering the handset is a Qualcomm Snapdragon 425 quad-core processor clocked at 1.4GHz. Having a Snapdragon chipset would please some users rather than having MediaTek onboard. Memory is at 2GB and that’s just about enough to let you enjoy Android and FunTouch OS fairly smooth and lag-free. 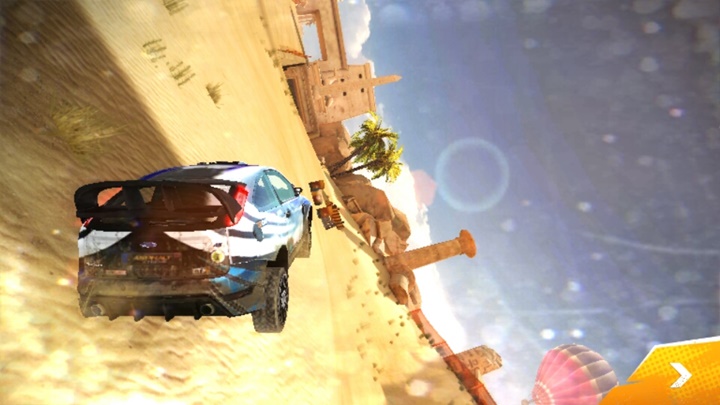 Graphics are handled by an Adreno 308 GPU which can manage casual games and some great titles. Intensive games are also playable, although graphic quality must be set to low or medium for higher framerates. We threw in Asphalt Extreme and, surprisingly, it’s perfectly running in its highest settings possible. 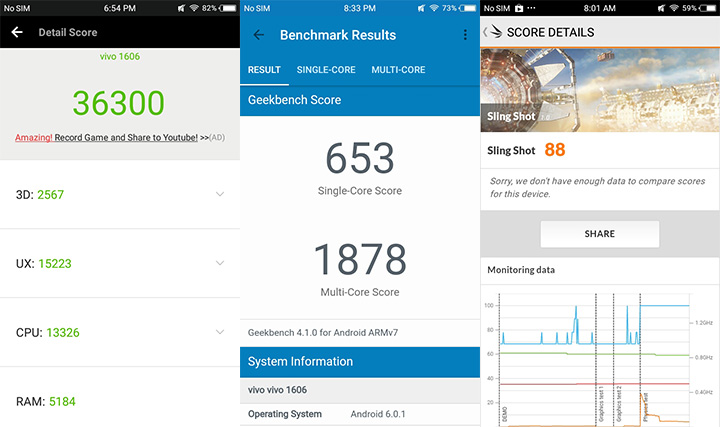 Benchmark results of the Snapdragon 425 is obviously not the best around but for a low-tier chipset, it holds up well in the competition. Here are some numbers:

Performance-wise, everything was smooth with our time the handset. Albeit that switching in between apps from time to time causes the phone to slow down a bit but nothing cringy.

Making calls with the Y53 is straightforward and pleasant thanks to its loud earpiece. It doesn’t have a secondary microphone but the sole mic at the bottom of the phone works just fine. 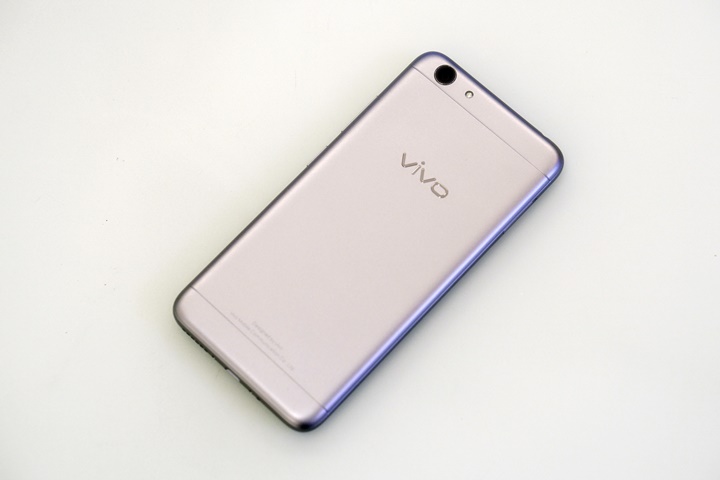 The phone has 4G LTE connectivity and as well as single-band Wi-Fi, Bluetooth 4.2, and GPS.

With its meager 2500mAh battery, the Vivo Y53 was able to last for a full work day with regular use. That includes continues Wi-Fi connection with a few hours of mobile data on the side, casual SNS use, texting, and a few minutes of calls. As for our traditional video loop test, it managed to last for 7 hours and 33 minutes. While with the PCMark battery test (Work 1.0), it lasted for a bit longer at 8 hours and 2 minutes.

The Vivo Y53 is not a successor to the last year’s Y55 but rather an update to the 2015’s Y51. Despite being a fresh release in the country, it recently got a price cut to Php5,990 making it a thousand peso cheaper than before. For Php6k, though, some local OEMs already have a beefier budget phone with an HD display and a more competent shooter. What you’re getting with the Y53 is the Snapdragon processor on a budget and decent battery life.