Leading the charge for the new Radeon Fury lineup is the R9 Fury X which, as mentioned earlier, is a water-cooled graphics card aimed at the enthusiast crowd. It comes with its own Cooler Master radiator block and a 120mm Nidec fan which AMD claims to have a better acoustic performance than that of the Titan X.

At the back of the R9 Fury X are three DisplayPort 1.2 ports and an HDMI out. This card can support up to six (6) displays simultaneously.

Next in line is the Radeon R9 Fury which, in a nutshell, is a slightly toned down version of the company’s flagship graphics card. Unlike the Fury X, this model doesn’t come with water cooling and instead rely on three (3) axial fans for cooling. 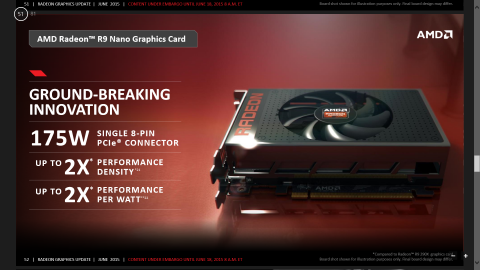 Lastly we have Radeon R9 Nano, a deceivingly small graphics card that only measures 6-inch in length, but packs quite a punch. With that size and low power requirement, this card should be ideal for small form factor PC and HTPC.

A single blower-type fan is responsible for cooling the graphics card and it shares the same video ports with its two bigger cousins which comprises of three DP1.2 ports and a single HDMI hub.

Despite the difference in form factor and cooling setup, these new Radeon Fury graphics cards actually share a lot in common with each other. Two of the most note-worthy similarities between these new cards include a new GPU dubbed as Fiji (comes in two variants Fiji XT and Fiji Pro), and 4GB of VRAM with High-bandwidth Memory (HBM) technology. 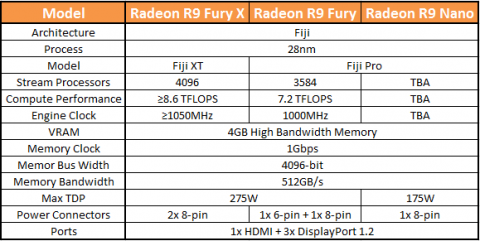 Of the three new graphics cards, the Radeon R9 Fury X will first hit shelves starting on June 24 bearing a USD649 sticker price. It will be followed by its air-cooled counterpart on July 14 which will be retailed for USD549.

Meanwhile, AMD is tight-lipped on the exact release date and pricing of the Radeon R9 Nano.