Facebook for Android is now on version 2.0 and is expected to increase the speed and performance of the app – by a lot.

There is no drastic change in the design and the UI when we downloaded the update, but it surely did what the update specified it would do. It increased loading speeds by a mile.

Facebook’s Android app wasn’t the best out there quite a while back. In fact, we never found ourselves using the Facebook app alone; we had apps like Friendcaster on the sideline for some other purposes. 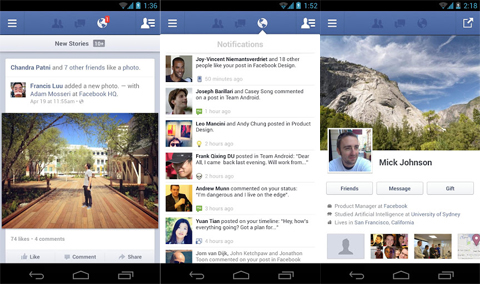 The previous versions of the app used HTML5 and some codes that enabled different Android devices to work with it – that is why it was so slow. Now, the new Facebook app for Android is built from the ground up. Meaning, the codes are different which will resort to faster performances.

We noticed that it was indeed fast. Scrolling was smooth and loading times were short. Facebook is really trying to keep the grasp that they have on their users, and it is working. The Facebook app has undergone through a lot of updates. It’s not the perfect app, but it’s trying to be and it’s almost there.

The update/download is available at the Google Play Store.