Globe Telecom proudly announced the completion of rolling out its HSPA+ technology and that its entire network has already been equipped with 4G coverage. Although that may be the case, subscribers in different parts of Philippines are still complaining of poor connectivity from the telco. Here’s why it’s hard to verify if Globe indeed has 100% HSPA+ coverage.

Let’s first understand how a cell site (like Globe’s) works. A single tower has about 3 or 5 types of transmitters – one for EDGE, one for 3G, one for HSPA+, WiMax, and LTE. But newer equipment now combines most of these networks into just one transmitter (EDGE, 3G & HSPA+).

Each signal has a corresponding reach. For example, if EDGE has a reach of 25-kilometer radius, then 3G has about 15kms reach and LTE has about 5-10kms. This was the reason why networks needed to construct more cellsites across the country.

Here’s how the latest announcement from Globe about having all of their cell sites equipped with 4G/HSPA+ transmitters can confuse subscribers. So when their press release says “100% 4G HSPA+ coverage”, people will think that every time you get a Globe signal, that signal will no less be HSPA+, 4G or LTE. But that is not the case since people still experience EDGE and 3G at some places. If we turn it around, the same analogy applies when Globe, for some reason, announces their 100% EDGE coverage — it doesn’t mean everyone will get EDGE or better. There will still be users who’ll receive GPRS or no signal at all. 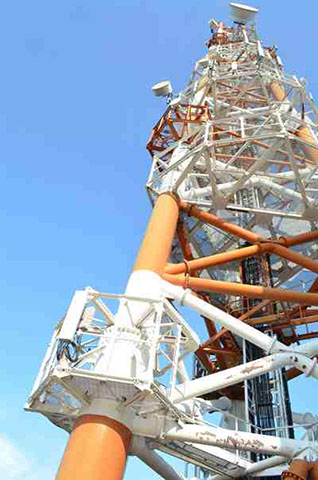 What we think Globe has accomplished is equip all of their network towers with 4G HSPA+ transmission. That means even their tower in the Spratlys Island will have 4G HSPA+ (which used to be just EDGE and 3G).

But that’s where the disconnect lies — having all of the towers equipped with 4G HSPA+ transmission does not mean everyone who connects to those towers will get no less than an HSPA+ signal. Depending on your location and distance from the towers, you will still get either EDGE, 3G, or HSPA+. Even if you’re inside the vicinity of a cellsite, but are buried deep in the basement, chances are you’ll still have no reception.

So since delivering that kind of “ideal” service means having to build about 5X to 10X more towers across the country, what Globe is frontlining here is that their existing towers are 100% capable of providing that service ONLY to those that are within range. Basically what their press release just did was to hype up a technology and make it sound more than what it really is — something that press releases were meant to do.

With that, here’s the bottom line: Are their towers fully-equipped with 4G and HSPA+? Most likely. But does the service give the demands of their subscribers as they claim they would? We don’t think so.

What are your thoughts on the subject? More importantly, how is the signal of Globe’s supposedly HSPA+ doing in your area?