Last April, I gave my initial impressions on the newest model of the ASUS ROG Zephyrus M family called the Zephyrus M GU502. Today, I got the chance to take it for a full spin and to give you an idea; I had a great time using it. Here’s my full review on this device! The Zephyrus M GU502 comes with a brushed reinforced magnesium alloy design which looks premium and sexy. Added to the fact that it is thin that makes it look like that it is an ultrabook rather than a gaming laptop which is a plus. It has a stealthy design if not for the red ROG logo located at the right side of the lid. I can open the lid with one hand, but I suggest that you should use your other hand for support as well. There’s also an evident screen flex; however, it still feels sturdy while I try to bend it. Looking at the main 15.6-inch screen, we see the slim top and side bezels which, for a gaming laptop, is great to know since it improves my viewing experience further. There’s a thick bottom bezel which is fine; however, there isn’t any webcam located here, so I’m somehow weirded out by it. Then again, this is a gaming laptop so you wouldn’t use it that much. Looking at the left will show the exhaust vent, charging port, RJ-45 LAN port, HDMI, USB type-A port, 3.5mm port for the mic, and another one for the headphones which is pretty refreshing to see given that laptops only have a single one for both audio input and output. 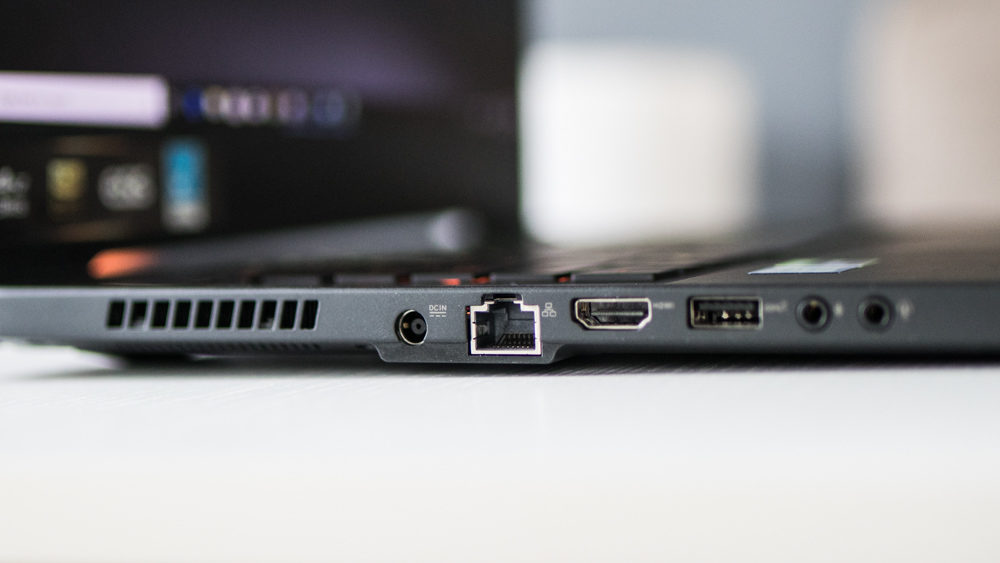 On the right side are the Kensington Lock, another exhaust vent, two USB 3.1 Type-A ports, and a USB Type-C. I’ve also noticed that there isn’t any SD card slot which is a bummer given that I would want to transfer my photos captured from my camera directly to the laptop. Looking at the back, you’ll see that there are two exhaust vents which is excellent given that it will significantly help in heat dissipation of the device. It’s also worth noting that this is necessary, at least for me, given that it has a slim form factor that carries powerful components. I’ll talk about its temperatures later on. 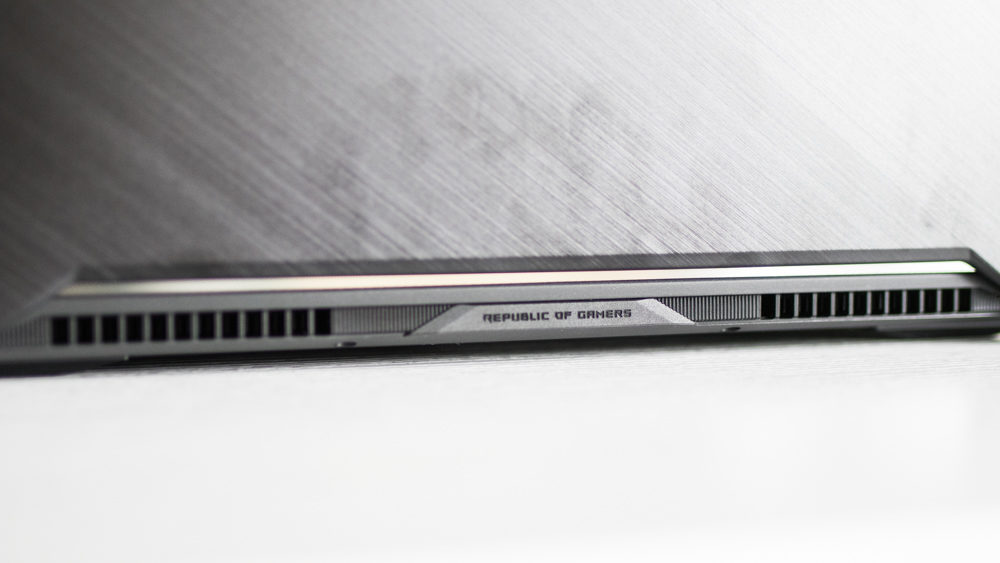 Below is the RGB-backlit 80% keyboard layout with some modifications on some button placements. The navigation keys such as insert, home, end, page up, page down, and delete are all located in a column formation at the rightmost side of the keyboard. The print screen key, on the other hand, can be found between the right alt and control buttons. This kind of positioning didn’t bother me much at all as I don’t use them that frequently. The buttons are low profile; however, they are clicky and tactile, which made me enjoy typing my heart out there so props to you ROG. The bottom segment houses the mousepad that feels like its coated with a matte finish. It’s not necessarily bad but, it feels like I’m running my fingers across a rough board which feels weird. Overall, the Zephyrus M GU502 feels relatively light and slim, which is excellent for a gaming laptop. I also found myself loving this device as my traveling companion, given its compact form factor. 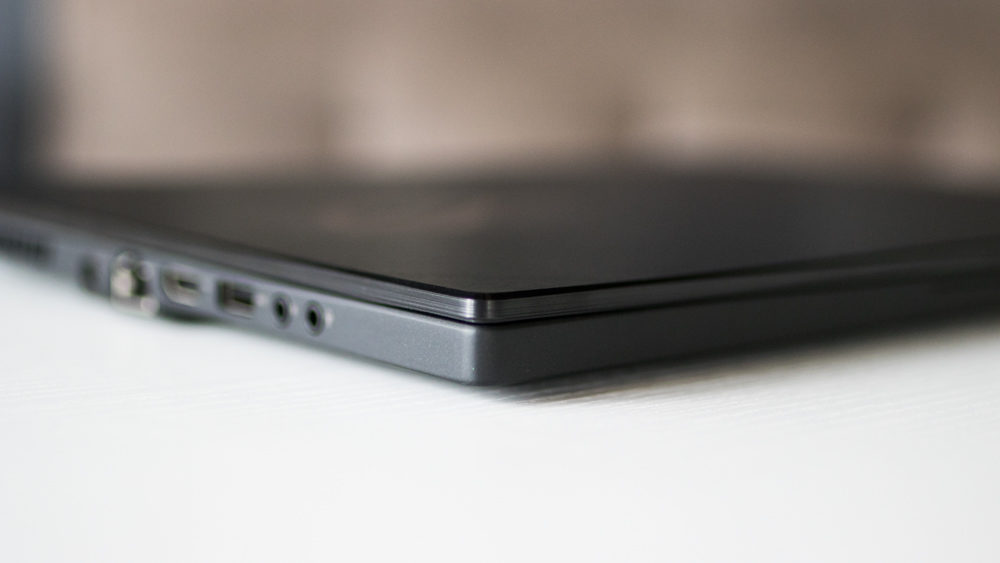 One thing that I like about Zephyrus M is that its 15.6-inch display comes with a 144Hz refresh rate, which is a blessing for the first-person shooter (FPS) players. The color reproduction is good; it has decent sharpness and viewing angle thanks to the slim side bezels. The ROG Game Visual lets you adjust the screen color mode depending on what you do. 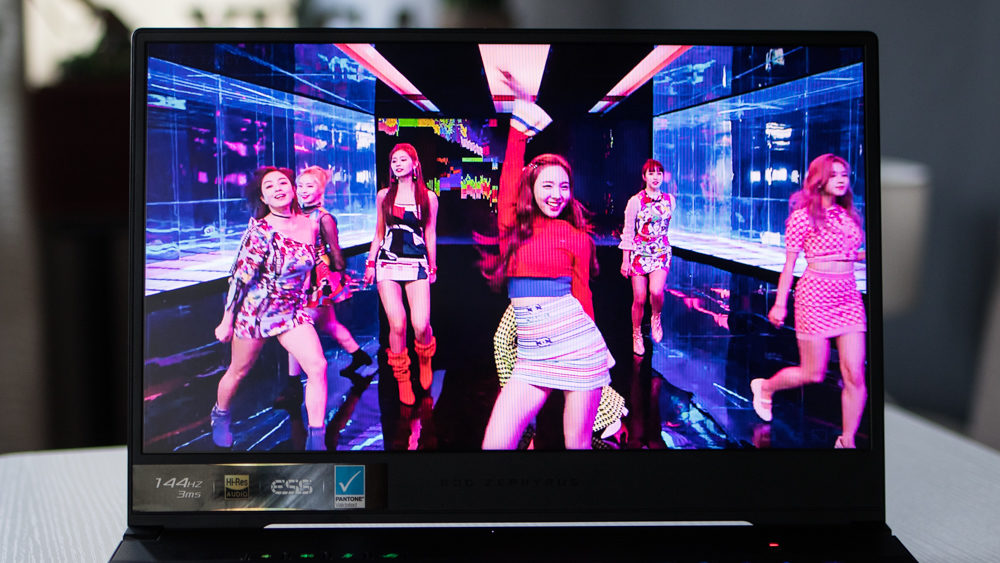 For audio, there are two loudspeakers located at the bottom which is not an ideal placement for me, but, it’s alright given that the sound is evenly distributed on both the left and the right. The quality is surprisingly good as it has decent highs and mids while the lows are existent. The Zephyrus M GU502 also has the ROG Sonic Master III application which lets you modify and personalize the sound blend that you want to hear. The Zephyrus M GU502 runs on Windows 10 Home and has a built-in 512GB M.2 NVMe SSD. It features standard applications such as ROG Armoury Crate which is the main dashboard of ROG laptops where you can change the type of RGB lighting of your keyboard, ROG GameVisual, and Sonic Master III that we mentioned earlier. It also comes with a McAfee LiveSafe which provides safety for your laptop. 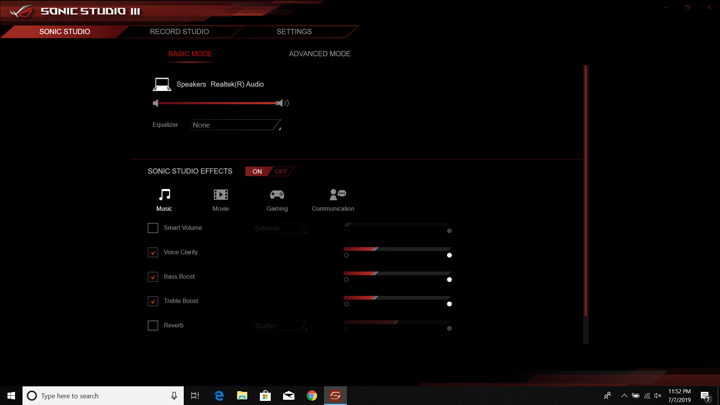 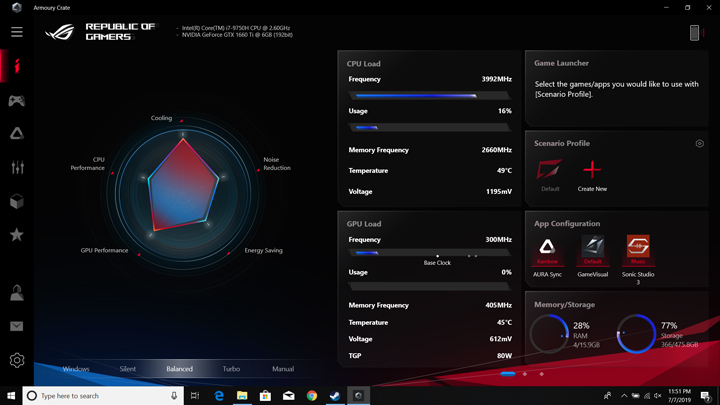 I tested how fast the storage was, and it did not disappoint. Check it out: Powering this gaming beast is an Intel Core i7-9750H paired with NVIDIA’s newest GTX 1660ti (6GB GDDR5) and 16GB of RAM. Navigating through the device is smooth like butter, which is great. Sporting the latest NVIDIA graphics, this device can run pretty much almost any AAA games at the highest settings with an fps count of 60 and above. Check them out. 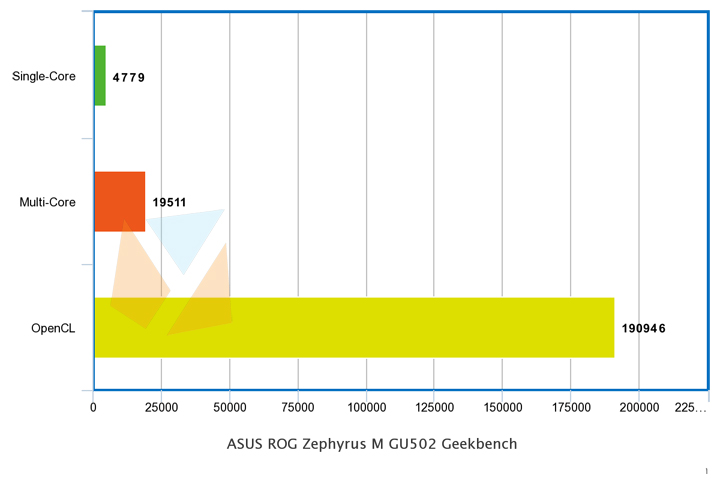 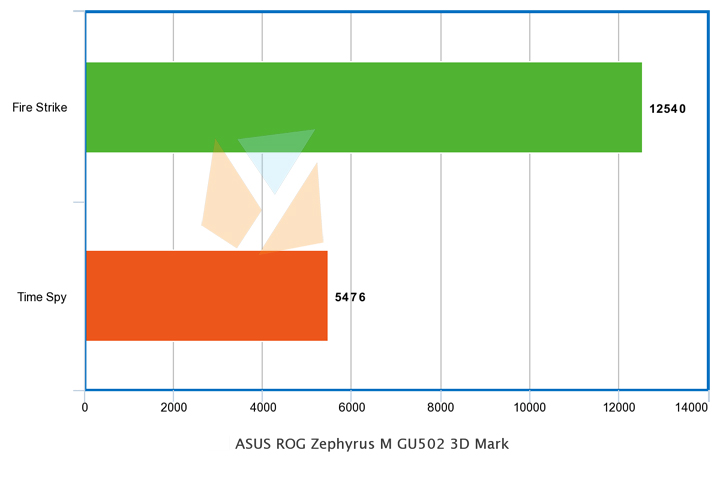 Playing games, especially Counter-Strike and Tom Clancy’s Rainbow Six Siege is such an eyegasm for me given that I love playing FPS games. Everything is smooth and easy to see, especially when it comes with moving objects and people. Given that there are four exhaust vents in the Zephyrus M GU502, I expected it to have way less heat built up around it — well, it didn’t disappoint. Testing it out in various temperature benchmarking tests like FurMark (for GPU) and Prime95 (CPU), it showed that the NVIDIA GTX 1660ti reached a maximum of 74°C . It’s relatively low while the Intel Core i7-9750H reached 84°C which is relatively high, but it’s still okay. For battery life, it lasted for 4 Hours and 15 Minutes when I tested the device out in our video loop test (1080p movie, 50% brightness, 50% sound, no RGB lighting, airplane mode, w/ earphones). It’s pretty standard for a gaming laptop to last this long, so there’s nothing unusual about this result.

The ROG Zephyrus M GU502 is a good gaming laptop that delivers excellent performance, especially good gaming capabilities. Aside from that, it has a 144Hz refresh rate which amplifies your gaming experience further especially with FPS titles. It also comes with a 512GB SSD and a 16GB RAM which is plenty even for gamers that want to store games or even run multiple games at once. My only beef with this device is that it doesn’t have an SD Card slot and a webcam. For the price of PHP 109,995, it’s slightly expensive to get for a GTX 1660ti powered device but if you have a budget, a desire for a stealthy-yet slim gaming laptop, go with this beast.