When I decided to go with the AMD A10-7850K for my personal rig, I knew I need to pair it with a high-frequency RAM to get the most out of the processor and its iGPU. So I went ahead and bought an 8GB G.Skill Ripjaws X 2133Mhz RAM kit (F3-17000CL9D-8GBXM) which we will be reviewing in this post. 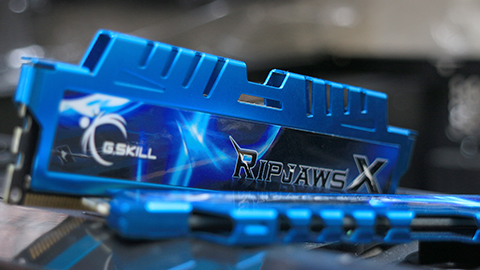 Like most fancy memory modules out there, the Ripjaws X comes with a sick-looking heat spreader which, more than anything, gives the RAM sticks plus points for aesthetics and badassery.

Not a whole lot of the RAM’s black PCB can be seen on the RipjawsX as almost everything is sandwiched in between 10-fin heatsink. The one we have here is in blue, but other options (Red, Black and Yellow/Gold) are available to suit your rig’s color scheme. 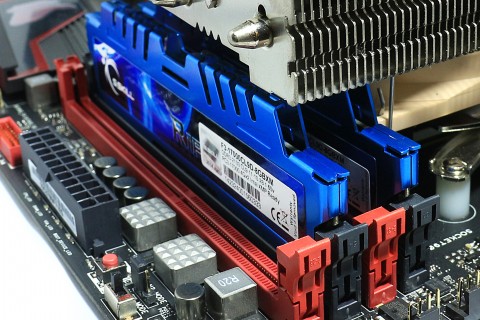 The RipjawsX measures 40mm tall which, depending on your current cooling solution, may present some issues with clearance. Based on experience though, the RAM were just short enough (by a hair) to sit perfect under the Noctua NH-L12 low-profile cooler as shown in the picture above.

The only problem is that I need to take out the CPU cooler every time I need to swap out memory modules. It’s actually more of an issue with the cooler than the memory module, and unless you often change RAM kits, we don’t think it’s going to be that much of a problem.

A quick look at the sticker attached to the memory module will tell you that these RAM sticks are rated to run at 2133Mhz with a timing of 9-11-10-28 at 1.65V. It’s not groundbreaking by any means, but this RAM kit has slightly better stock timings than other 2133Mhz modules in my shortlist. 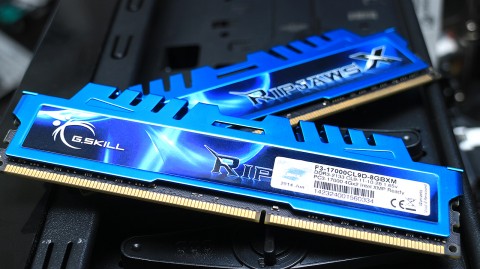 Using the ROG Crossblade Ranger, we were able to push the RipjawsX to 2400Mhz without adjusting any other settings besides the frequency. This, of course, resulted in to slightly slower timings (10-12-11-31) which are still within the acceptable range.

Your overclocking mileage may vary depending on your system setup and by toying around with various settings, but for the sake of this review we will only stick with 2400Mhz for the overclocked frequency.

If you guys read our review of the A10-7850K, you’ve probably noticed that we’ve used this memory kit (running at 2133Mhz) on all of the benchmark tests that we’ve conducted on the processor. So if you’re interested to see what kind of performance gains you can expect out of this RAM you can check out our review here.

Apart from the APU-related benchmarks found on the link above, we’ve also ran additional RAM-specific tests on the Ripjaws X F3-17000CL9D-8GBXM with it running at 2133MHz and 2400MHz using SiSoft Sandra, AIDA64 Extreme and PerformanceTest 64-bit. 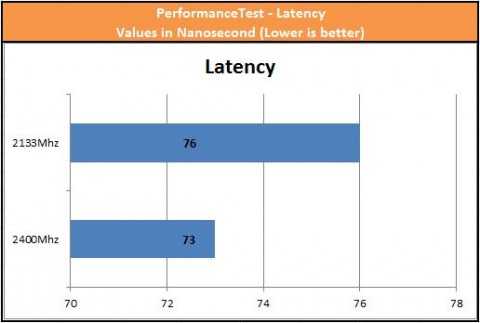 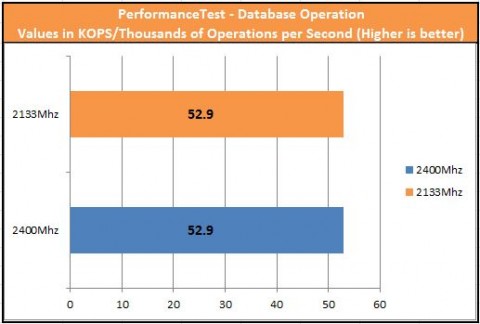 The three synthetic benchmark tests we ran yielded contradicting results, particularly in the Latency segment. The score that we got on AIDA64 were near identical despite of the fact that the RAM was running on different frequencies and timings during the test.

On the other hand, the latency test scores on SiSoft Sandra and PerformanceTest tell a different story. The former claims that the stock timings of the RAM while running at 2133MHz will have less latency compared to when it’s overclocked.

Meanwhile, the PerformanceTest result shows that despite of slower timing when the RAM is overclocked to 2400MHz, the memory module performed better in its latency test compared to when it’s running on 2133MHz and stock timings. 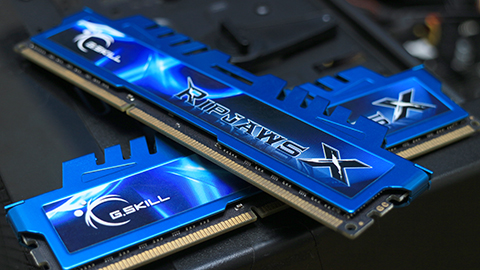 What is clear though is that the user will get a slightly better performance during Read/Write/Copy operations when it’s overclocked as suggested by the result we got from AIDA64’s memory test.

Other than the possible clearance issue due to its 40mm-tall heat spreader, we didn’t have any other gripe about the G.Skill Ripjaws X memory modules. It’s got a well-built design, it offers decent performance out of the box, and one can easily bump up the speeds a bit should they feel the need to do so.

The G.Skill Ripjaws X F3-17000CL9D-8GBXM is available locally in some tech shops and online sellers and currently has a street price ranging from Php3,800 to Php4,500.

* Clearance may become an issue with some air coolers