Nowadays, it’s pretty safe to say that Android tablets aren’t as ubiquitous as they used to be. This is due to a number of different factors, from the increase in smartphone screen size, to the impracticality of using them as a so-called laptop replacement. 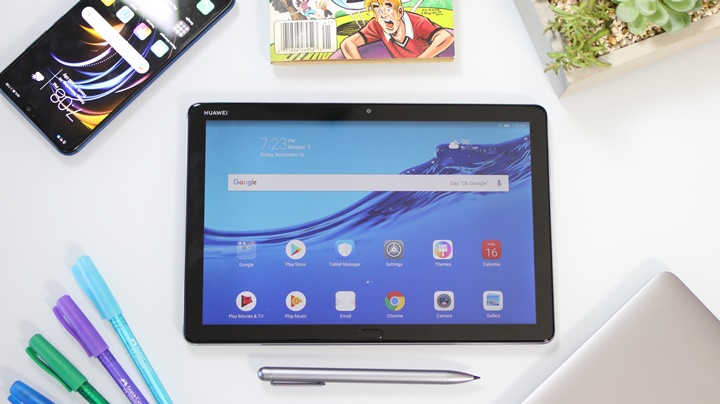 Even in a tablet market that is dominated by Apple with their current line of iPads, Android tablets still very much do exist in 2018, and albeit small, there is still a market for them. But my question is — are Android tablets still good? We’re taking a look at the Huawei MediaPad M5 Lite in this review in hopes of contributing some insight to that question.

It’s not premium in an aesthetic manner, but the MediaPad M5 Lite has a robust build quality. Don’t get me wrong, just because I don’t think it’s as pretty as a tablet can be, that doesn’t mean it feels like a cheap device. Our unit comes in Space Gray too, which is one of the coolest colors you can get for a device.

Up front, we have a 10.1-inch display that’s surrounded by fairly chunky bezels, though the edges of the device feel very nice thanks to that 2.5D curved glass. When viewed in its default landscape orientation, we have the 8MP front camera and notification LED above the display, with a single capacitive button below. 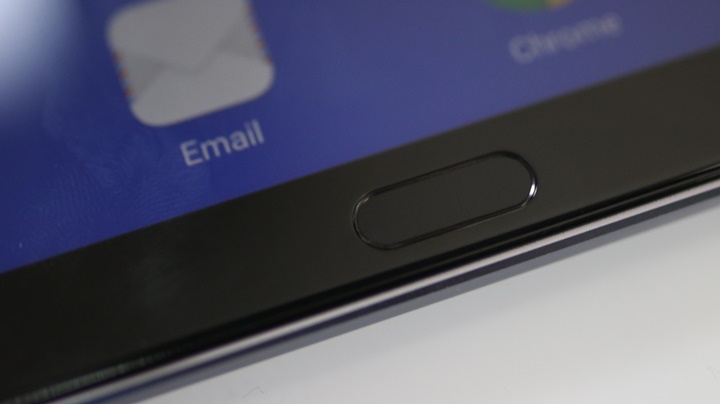 The button also doubles as a fingerprint scanner and serves as the single actuation point for all three standard navigation controls. A quick tap is ‘back’, a long press takes you back to the home screen, and a swipe bring up recent apps.

Within just one hour of using this device, the capacitive button/fingerprint scanner was quite a turn-off. It doesn’t feel natural to fumble around for it every time, especially when you switch back and forth between portrait and landscape orientation. On-screen navigation buttons or even gestures would have been more intuitive. 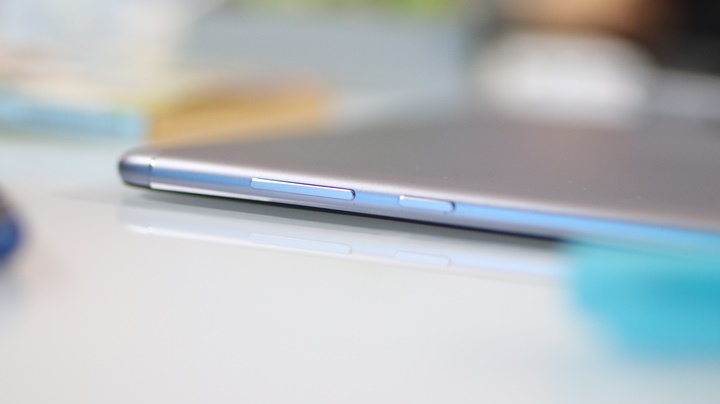 On the right side, we have the volume and power/lock buttons. On the left, we have a tray for a single microSD card, a USB Type-C port, and a 3.5mm audio jack. We don’t get a nano-SIM slot in the tray since we have the Wi-Fi only model. 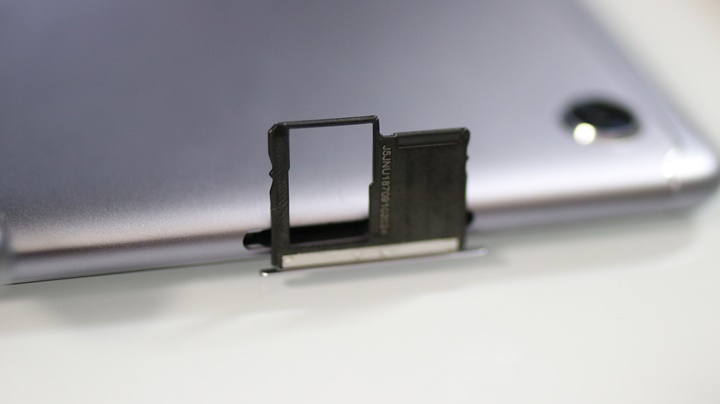 On the top and bottom, we have four audio grilles, all powered by harman/kardon speakers. We’ll talk about their quality in the next section. Finally at the back, we have the lone 8MP rear camera and the Huawei logo smack in the middle. 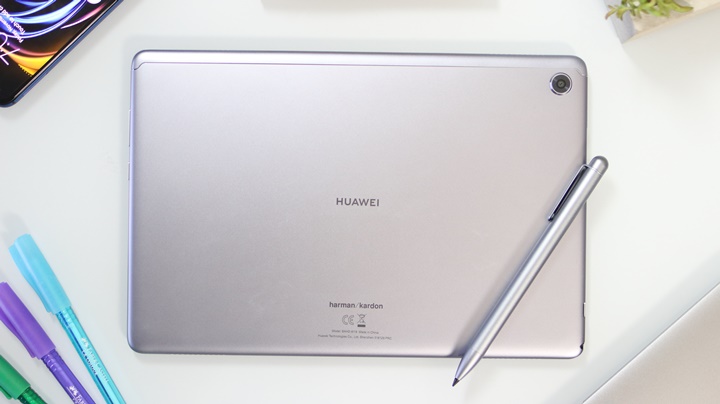 As a tablet that’s geared more towards content consumption, it needs to be hardy enough to survive being tossed around the couch and thrown into backpacks. There’s no doubt the MediaPad M5 Lite’s aluminum frame can do that, even without a protective case.

The 10.1-inch IPS display comes in at a resolution of 1920 x 1200, so it’s a tad bit taller than a traditional 16:9 display. It’s a decent display for watching videos, as it can get very bright, and colors are decent. It has full stylus support, and is very responsive in that regard. We’ll talk about the stylus in the next section. One of the things I like most about this tablet is its set of four harman/kardon speakers. They sound better than any smartphone, naturally. They’re loud, but clear throughout the range of sound. Highs and mids are crisp, and lows are present, but not thumping. Watching movies with this tablet is a joy mainly due to those speakers.

The M5 series’ partner in crime is the Huawei M-Pen stylus. For all intents and purposes, it works perfectly well as a stylus; it does the job it’s supposed to. It’s accurate, feels great in the fingertips, and has a good size. Our main issue with it, is with design. First of all, there’s nowhere on the tablet to put it when not in use. Some examples of a successful implementation of this are — the Samsung Galaxy Note 9’s dedicated S-pen slot, or the Apple iPad Pro’s magnetic side for holding the Apple Pencil. When you’re done using the M-Pen, the only reasonable place to put it is in your pocket.

It also would have been nicer if it had a rechargeable battery instead of an AAAA battery because those things aren’t easy to come by.

There is a very high chance that you will be silently judged by passers-by if you use a tablet to take pictures. But in any case, the MediaPad M5 Lite does come with a pair of them, so we still need an evaluation. I’ll make it quick. For a short answer, the MediaPad M5 Lite’s cameras are terrible when compared to your average smartphone in 2018. There isn’t a lot of fine detail preserved, images have a smudgy quality to them, and colors are slightly washed out. This is even more evident in low-light scenarios, with the added bonus of copious amounts of noise. Selfies are passable if you have good, soft lighting, but again, low light performance isn’t good.

Look, this isn’t the device you want to buy if you’re looking for something that can take good photos, and that’s fine. Photography isn’t what the MediaPad M5 Lite is made for.

For software, the MediaPad M5 Lite is running EMUI 8.0 based on Android 8.0 Oreo. The interface is pretty much what you get on most Huawei devices. It’s clean, simple, and organized. There is a selection of pre-installed apps including the Google and Microsoft suites, some native Huawei tools, as well as some tablet-specific apps. We only get two Huawei tablet-specific apps in the Nebo app, which is for note-taking and drawing, as well as MyScript Calculator, which lets you draw your equations before converting them to numerical text that can then be calculated. 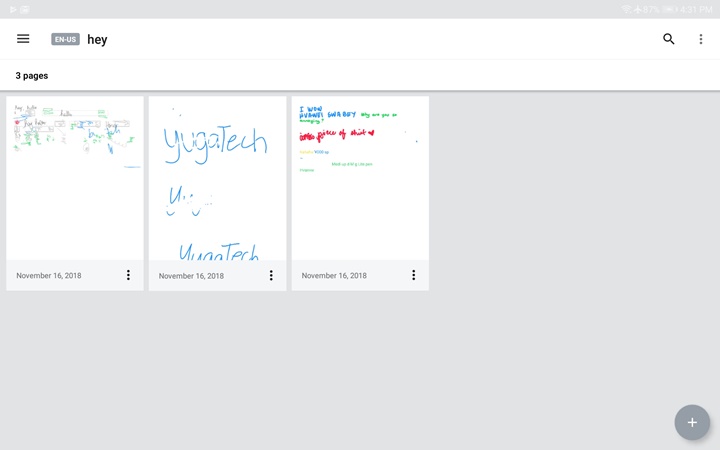 For the parents out there, you may be delighted to know that there is a dedicated app for children called ‘Kids Corner’. It’s basically a separate interface that gives kids access to their own sound recorder, camera, and drawing mode. There’s also another kids app called ‘Monster Class’. It has a curated selection of cartoons, songs, books, and games for kids.

Kids Corner comes with built-in parental control that lets you manage what apps and multimedia can be accessed, as well as set time limits for usage. Accessing parental control or exiting Kids Corner entirely, requires a dedicated pass code or a parent’s fingerprint.

The MediaPad M5 Lite is powered by a HiSilicon Kirin 659 chipset, 3GB/4GB of RAM, and 32GB/64GB of storage. Basic usage such as simple navigation, file transfer, video streaming, and social media browsing all run smoothly. Gaming performance is below average with titles such as Asphalt 9, PUBG Mobile, and Mobile Legends, but will suffice for a quick session. Playing 3D games on a tablet isn’t too comfortable anyway. 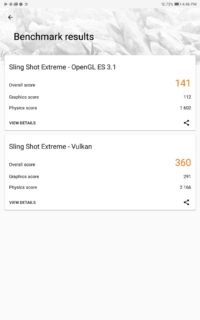 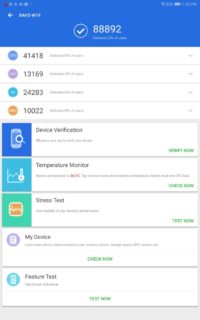 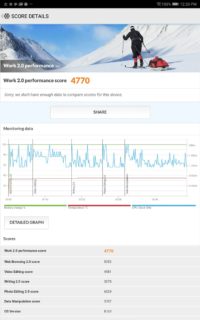 We didn’t get stellar scores in our synthetic benchmark tests, but these are easily forgiven. Performance is not the main selling point of this device.

The MediaPad M5 Lite carries a 7,500mAh non-removable Li-Po battery, which sounds like a lot, but remember that this is a tablet with a huge 10.1-inch screen. It actually lasts pretty long on stand-by, so you should be able to leave it on the couch all day, and when you return to using it at night, you will still have a lot of battery. In our video loop test (1080p video, 50% brightness, 50% sound, Airplane Mode, with earphones), it lasted 10 hours and 55 minutes. If all you’re gonna do with this device is watch movies offline, that’s easily 4-5 movies.

I started this review with the question — Are Android tablets still good? My verdict on the MediaPad M5 Lite will definitely not answer that question entirely, but can provide some insight. 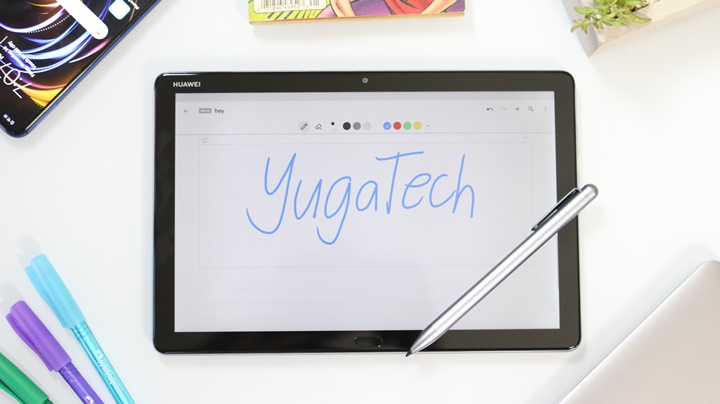 This device certainly cannot compete with the top of the tablet market; your iPad Pros, Pixel Slates, Windows detachables, et al. But as a device for very casual media consumption, light creative work, and family use, it does its job well. It’s got a good screen, even better speakers, solid battery life, and an accessible software experience.